Sadly, one of Martin Luther King Jr.'s daughters lent her name to the anti-gay rights movement. Her father never would have. 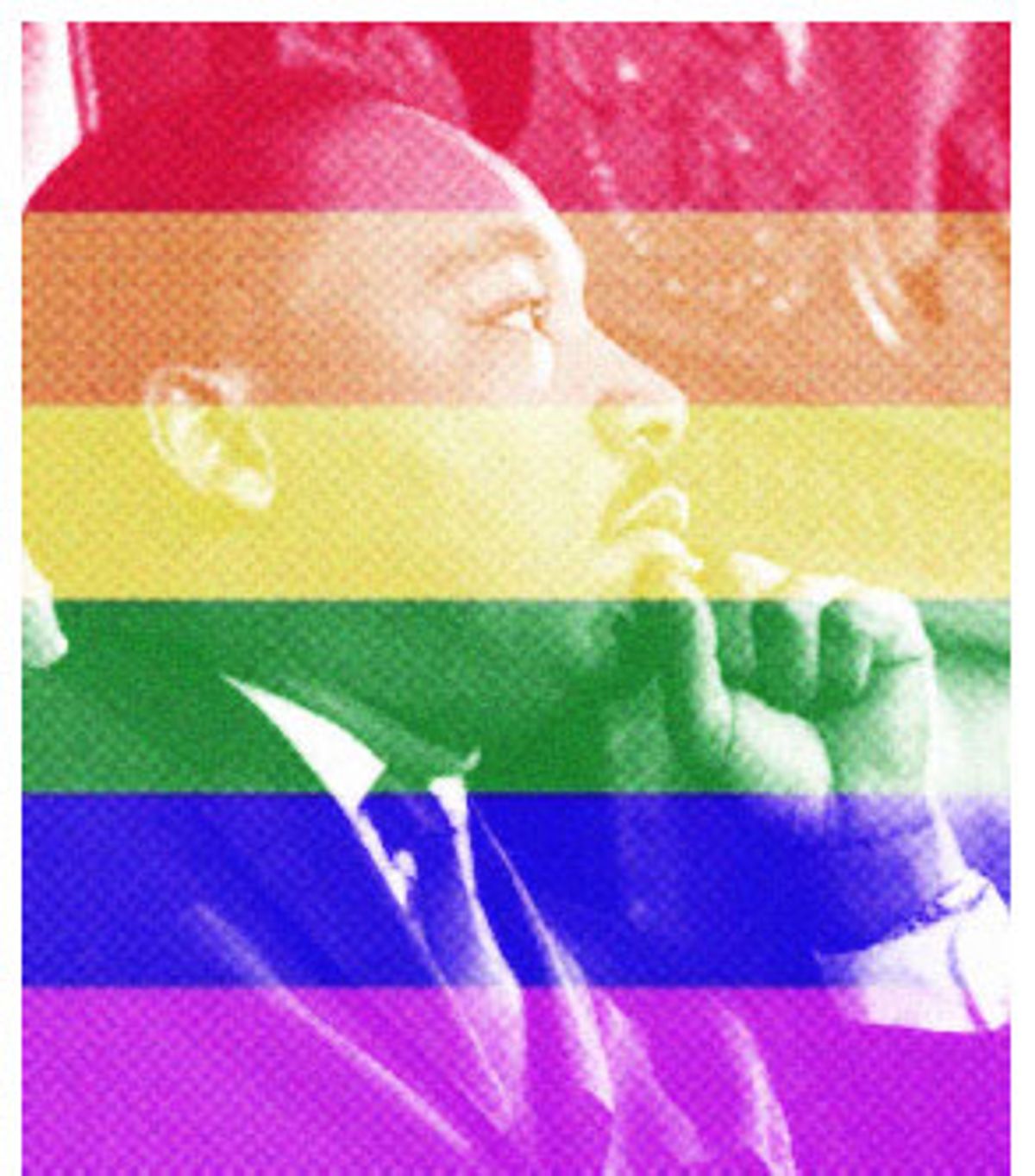 The sight of the youngest daughter of Martin Luther King Jr. standing at her father's grave site with thousands of demonstrators to denounce gay marriage was painful. The Rev. Bernice King and march organizers deliberately chose King's resting place in Atlanta to imply that he would have stood with them. But Martin Luther King's uncompromising battle against discrimination during his life -- and his persistent refusal to distance himself from a well-known gay civil rights leader -- show that King never would have endorsed an anti-gay campaign.

It's not the first time that a King family member has sullied King's name and legacy to torpedo gay rights. In 1998, King's niece, Alveda King, barnstormed the country speaking at rallies against gay rights legislation. In case anyone missed the King family connection, her group was named "King for America." Gay rights groups everywhere countered King's "repent and save yourself" message to gays by quoting a public statement King's widow, Coretta Scott King, issued in 1996 in which she said that her husband would be a champion of gay rights if he were alive.

In this case, King's daughter was careful not to mention gay marriage in her talk. Her mentor and organizer of the march Bishop Eddie Long cautiously downplayed the issue, though media reported that Long's Web site listed the promoting of a federal amendment against gay marriage as a major goal of the march. But Bernice King is an outspoken evangelical, and in the last couple of years she and other black evangelicals have marched, protested, written letters and petitions denouncing gay marriage. Polls show that black evangelicals' hostility to gay marriage is much stronger than that of white evangelicals.

In King's day, gay rights were invisible on America's public policy radar, and homosexuality in both black and white communities was hushed up. There's not a word about homosexuality in any of King's speeches or writings.

There's a way, however, to gauge what King's feelings were on the issue, and that is the longtime personal and political relationship that King had with Bayard Rustin. Best known as the driving force behind the historic 1963 March on Washington, Rustin was a close King associate and a known homosexual.

In 1953, Rustin was convicted of "morals" charges. In the frozen mood of the day, that was the parlance for homosexual acts. It carried a quick and sometimes stiff jail term. King knew this, as did top FBI officials, black elected officials, civil rights leaders and the tight circle of black ministers around King.

That didn't deter King from embracing Rustin. At the high point of the Montgomery bus boycott in 1956 that launched King into the national spotlight, and over the vehement opposition of black ministers who called homosexuals and Rustin unsavory and evil, King invited Rustin to come to Montgomery as an advisor. A year later, King asked Rustin to draft the resolutions and the organizational charter of his fledgling Southern Christian Leadership Conference. He demanded that the SCLC board, mostly composed of black ministers, hire Rustin as its coordinator and publicist. King didn't win that one. The board flatly turned him down, and though it was unstated, Rustin's homosexuality was a major reason.

The issue continued to dog King and his relationship with Rustin. Harlem Rep. Adam Clayton Powell publicly threatened to accuse King of having a homosexual affair with Rustin if he didn't call off planned demonstrations at the 1960 Democratic convention. King didn't buckle to Powell's blackmail threat and went ahead with the demonstrations anyway.

During the next few years, the assault on Rustin's homosexuality, and the pressure on King to dump him, escalated. FBI director J. Edgar Hoover, busy with his blatantly illegal spy campaign against King, publicly released wiretaps of scurrilous remarks King associates made about Rustin's homosexuality. On the eve of the March on Washington in 1963, South Carolina Sen. Strom Thurmond denounced Rustin on the Senate floor as a sexual pervert, and inserted a copy of his 1953 arrest booking slip in the Congressional Record. President Kennedy and Attorney General Bobby Kennedy also flatly demanded that King get rid of him. King did not publicly break with Rustin. And when he did eventually distance himself politically from Rustin, he gave no public hint that Rustin's homosexuality was an issue.

King risked much to work with and defend Rustin during the tumultuous battles of the civil rights era. He valued him as an ally and a major player in the struggle. He also believed that deeply embodied in the civil rights fight was a person's right to be who and what he was. While King may have praised his daughter for having the courage and conviction to march for her beliefs, bigotry is still bigotry, whether it's about race or sexual preference. He would not have marched by her side.