The year's biggest pop stars dropped the skanky booty-shaking, and -- like much of the country -- chose a conservative path. 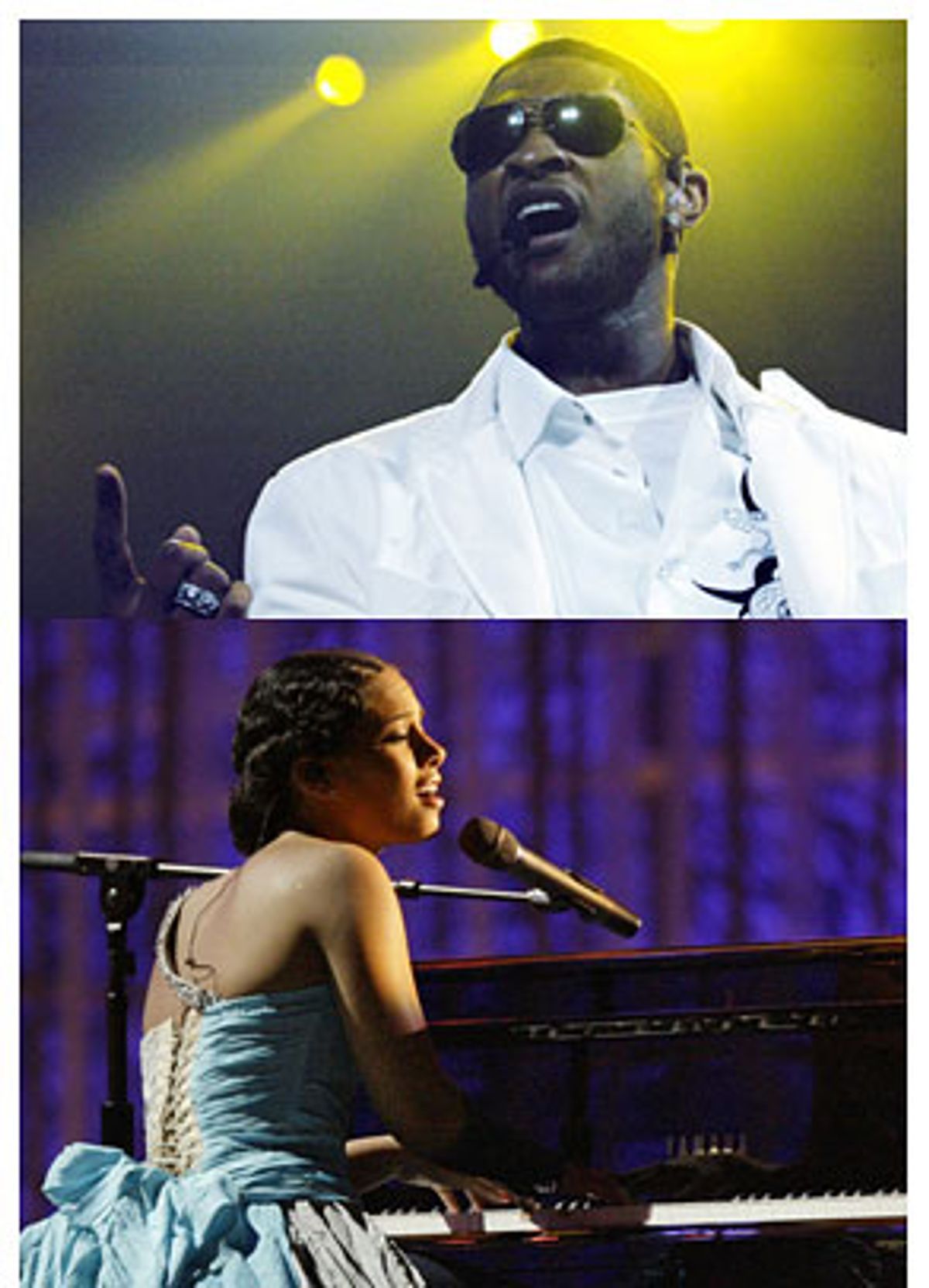 Quoth Jay-Z: "You can't be running around in jerseys when you're 30 years old."

The oracle spoke, the people listened. Jay-Z, with his new fondness for suits and button-up shirts, best set the year's tone: Maturity was in, clean-cut was in. An old-fashioned, elegant idea of what was stylish was ascendant. In popular music, this was the year of the white suit, of the rakishly angled hat.

The new aesthetic was everywhere: in the retro-utopian ballrooms of R. Kelly's "Happy People" and Outkast's "I Like the Way You Move" videos; in the speak-easy vibe of Beyoncé's "Naughty Girl" video; in the "Ed Sullivan Show" theme of the "Hey Ya" video; in the sudden celebrity of P. Diddy's natty manservant, Farnsworth Bentley. Nelly, the man who brought us "Hot in Herre," released a record called "Suit." And look at what happened to Christina Aguilera! I don't know how they got the skank out of that girl, but now she's dressing in '20s-style flapper dresses with a coquettish curly bob. Even Britney is grown up, married with children. In the upper echelons of hip-hop and pop, it was out with the hoodies and gold chains, and in with a more classically moneyed style, with all the trappings of wealth and maturity. Out with bling, in with bespoke.

This may have been most transparent in fashion and in visual aesthetics, but it also came through loud and clear in the year's most successful music. In place of the forward-looking, sparse, jabbing production and challenging harmonic terrain that had been so dominant in hip-hop and pop, there was a new emphasis on warmth and fullness, on sumptuous orchestrations and comfortable, well-worn harmonies and baroquely florid arrangements. Perhaps taking a cue from an increasingly politicized culture -- where the hysterical response to an exposed nipple at the beginning of the year put pop culture on notice -- the most popular music stayed conservative, channeling the sepia-toned lushness of classic soul and pop.

Consider the two greatest critical/commercial triumphs of the year: Usher and Kanye West. Rapper/producer and critic's darling Kanye had more impact on the sound of pop music this year than any other single artist, both with his own singles ("Through the Wire," "Jesus Walks") and productions for other artists (Twista's "Slow Jamz" and "Overnight Celebrity"; Alicia Keys' "You Don't Know My Name"). Kanye's music is built on the analog warmth and nostalgic crackle of old soul samples and smoothly sophisticated string orchestrations, and "Slow Jamz" might be the distilled essence of it all: lyrics referencing great slow jam artists of the past ("Marvin Gaye, some Luther Vandross, a little Anita," for starters), a couple of nostalgia-inducing soul samples, a silky smooth, string-laden arrangement, but also a finicky complexity to the way it's all fit together, with Twista's lightning-fast rapping interlocking precisely with the sample above it.

What's extraordinary about Usher is simply the magnitude of his success; that a straight-up R&B crooner, singing thoroughly unmodern ballads like "Burn" and "Confessions (Part 2)," could be not just a big seller, but also a hip, young celebrity with real glamour and star power. Usher's female counterpart, Alicia Keys, has an appeal based entirely on her nostalgic evocations of classic soul, and by the air of "class" provided by a grand piano. The flashy piano run in the chorus of her hit "You Don't Know My Name" was an extreme example of the kind of gushingly complex flourishes so in vogue this year. Usher and Keys currently hold the No. 2 spot on the Billboard singles chart with their duet "My Boo," a slick, sentimental ballad that represents everything unadventurous, retiring, and uninteresting about this year's pop music.

Notable by their absence in 2004 were Timbaland and the Neptunes, the producers who had been such dominant commercial and artistic forces for the last few years, their lean, sharp-edged tracks replaced by Kanye's warm, rounded, lushly blended fantasias. The Neptunes have finally come storming back with one of their oddest, and coolest, productions, Snoop's "Drop It Like It's Hot," currently at the top of the charts. And if there's any justice, the brilliant new Timbaland-produced Ludacris track, "The Potion," will be joining it there soon. But until the recent release of those songs, this year had produced nothing with the bumping minimalism of Missy Elliott's Timbaland hits like "Get Ur Freak On" and "Work It," or the out-of-nowhere strangeness of Kelis' Neptunes-produced "Milkshake." Those songs were part of a daring, forward-thinking spirit in pop music, testing the bounds of how abstract and alien it was possible for a hit song to be. But that pretty much evaporated this year.

Instead we got Usher's slow-burning ballads, the downy-soft warmth of "I Don't Wanna Know" by piano-playing crooner Mario Winans, the smooth, placid synth-strings of Eamon's "Fuck It (I Don't Want You Back)," the delicate and complex sample of Chinese music that runs behind the entirety of Christina Milian's "Dip It Low," and Prince's nostalgia-driven comeback hit, "Musicology." Another emblematic success story is Maroon 5, a band that sneaks a sleek, retro, Stevie Wonder-inspired vibe into their otherwise lily-white smooth pop. Their record, "Songs About Jane," which yielded hits like "This Love" and "She Will Be Loved," was actually released in June 2002. It's no coincidence that this was the year for it to finally become such an enormous hit.

Every action has a reaction, and this year's was crunk: jagged, brutal and in your face. If the decadent streak in this year's music was the product of an engorged culture crumbling under the weight of its own wealth and waste, crunk was the barbarians at the gate.

There's nothing smooth about crunk: beats that sound like they're blasting out of a crappy car stereo that can't quite handle the volume, shrill synth sounds, often just a single sliding oscillator, way up high, with nothing in between but the (usually aggressive) rapping. Led by hit-making producer Lil Jon, crunk was a generous pinch of salt in what otherwise could have been a cloyingly sweet year.

A cynic might say that the trend toward sweet, smooth, retro sounds was evidence of an art form losing its youth and freshness, becoming self-conscious, but I don't think that's what's happening here. Music doesn't develop in a straight line. It moves in fits and starts, reactions and counterreactions, a pendulum swinging back and forth, with each generation correcting, and usually overcompensating for, the excesses of the previous one: the romantic torrents of Berlioz and Chopin replaced the cerebral, methodically structured classicism of Haydn and Clementi; punk-rock sharpened its fangs to puncture the bloat of prog-rock and scratch the glossy facade of disco. The last few years have been dominated by the brutal minimalism of Timbaland and Missy (and a legion of imitators), the glittering, brash futurism of the Neptunes; by pimped-out guys and skanked-out girls. What more natural reaction than lush orchestrations and an elegant white suit?

But there's also more than a whiff of conservatism to the whole thing, of playing it safe, of new money trying to pass for old because it's more respectable. After all the excitement of the hip-hop high life, of rap moguls like P. Diddy and Jay-Z shattering the glass ceiling, even the rebel kings are putting on suits and telling people to grow up. There's also an air of post-Nipplegate timidity, fear of Michael Powell and the "moral" watchdogs. Sex is still being sold, of course, but more subtly, without all the sweat and physicality, without the big-ass Timbaland beats and booty shaking.

In a year of such intense political polarization, so much anger and activism, it's surprising that popular music has withdrawn into relative conservatism, that major statements like Eminem's searing "Mosh" were so rare. Or maybe not. Just as often as popular music provides a rallying cry, giving voice to people's angers and frustrations, it can provide an escape from them.