How to run an imperial presidency: Reward those who have failed. Otherwise, the whole charade will be exposed. 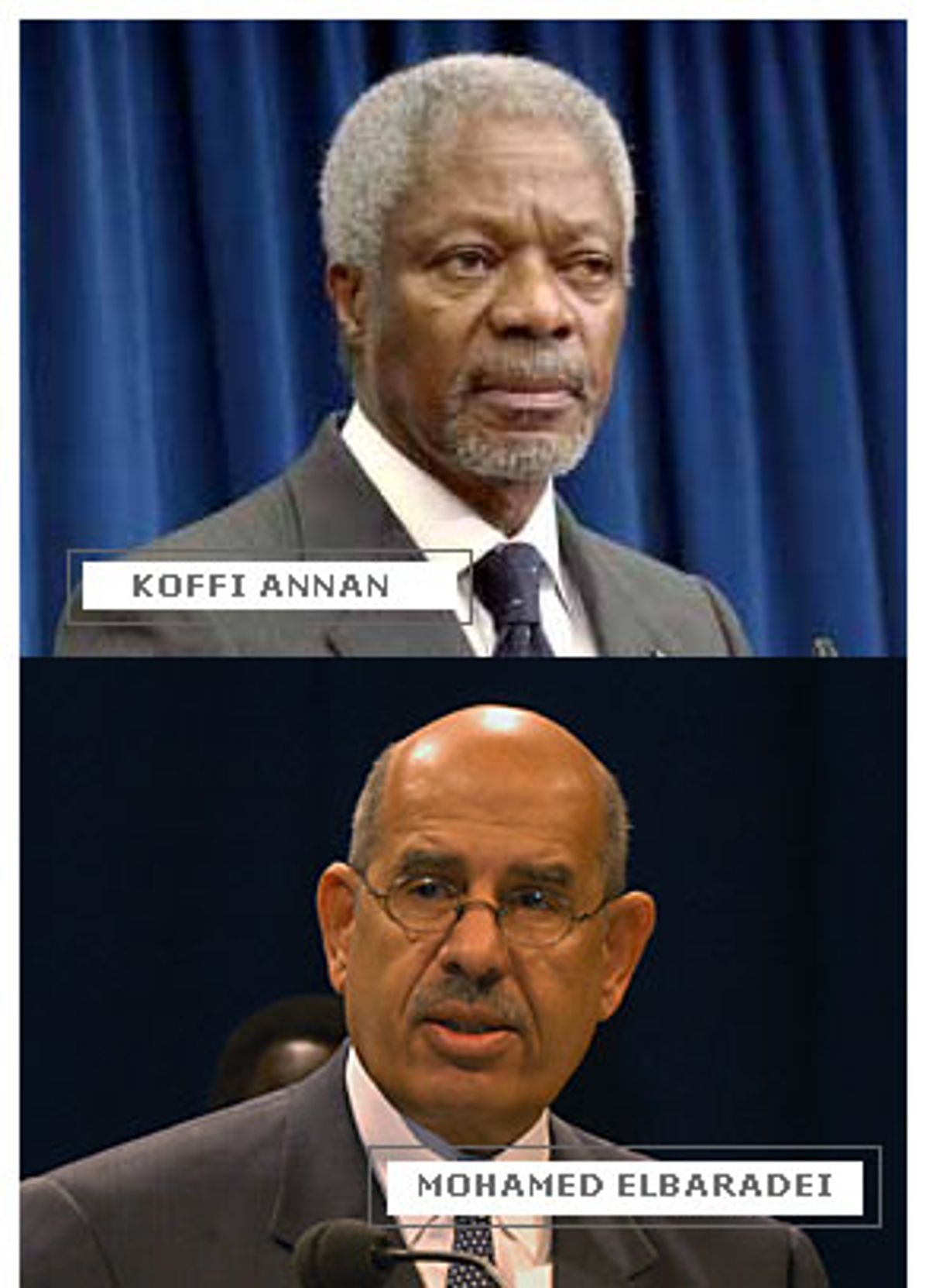 How President Bush will handle the vexing difficulties of imperial management has already become apparent in the early days since his reelection.

For months the United Nations' oil-for-food program for Iraq has been a target of conservative media. The U.N. itself has appointed a commission headed by former Federal Reserve chairman Paul Volcker to investigate past abuses. With the election over, the administration began its finger-pointing with U.N. Secretary-General Kofi Annan, who had called the invasion of Iraq "illegal." News was leaked that Annan's son had been a consultant to a company involved with the oil-for-food program, though Annan said he knew nothing about it. The outgoing U.S. ambassador to the United Nations, John Danforth, was sent out to declare that Annan's resignation was a live issue.

The relevant facts about the program were pushed to the side. James Dobbins, the former U.S. ambassador to Afghanistan, wrote in the Washington Post: "American outrage over the diversion of U.N.-supervised Iraqi oil-for-food money seems to miss three salient points. First, no American funds were stolen. Second, no U.N. funds were stolen. Third, the oil-for-food program achieved its two objectives: providing food to the Iraqi people and preventing Saddam Hussein from rebuilding his military threat to the region -- and in particular from reconstituting his programs for weapons of mass destruction." But these calm points were far removed from the administration's objective.

Then the Post reported that the United States was wiretapping Mohamed ElBaradei, director general of the U.N.'s International Atomic Energy Agency, in an operation to discover whether he was secretly helping Iran hide its nuclear weapons program. In fact, ElBaradei was successfully working with the Europeans to negotiate a resolution with the Iranians. It was this diplomacy that neoconservatives within the administration were seeking to discredit. Compliance by Iran with internationally monitored nuclear development isn't the objective of the neocons; they want regime change, an Iraq redux. The Europeans can't be frontally attacked, so ElBaradei was put in the cross hairs. The techniques of the permanent campaign, especially negative attacks, recently applied in the reelection contest, are being transferred seamlessly and shamelessly to international relations.

In part, the slash-and-smear campaign against Annan and ElBaradei is the Bush administration's effort to subjugate international civil servants and organizations to its central command. But this episode also reflects the rolling coup of the neocons as they struggle for power, position and policy in a second Bush term. Behind the scenes, they are scraping for new appointments in the national security apparatus. And in the wake of the catastrophe in Iraq, they are trying to foster a new conflict with Iran. Even Karl Rove, Bush's political strategist, plays in this arena, with his very own Iran advisor -- Michael Ledeen, a sleazy operator on the fringes who was involved in the Iran-Contra scandal (in which even Oliver North suspected him of skimming money).

At the least, the attacks on the United Nations serve as a political distraction from Iraq, where 178 U.S. soldiers have been killed since Bush's reelection. (The indispensability of the U.N. in arranging the elections in Afghanistan and Iraq goes unmentioned.) But America's front-line troops have not been distracted from the reality of carnage. On Dec. 8, they greeted Secretary of Defense Donald Rumsfeld with blunt questions about the failure to provide sufficient armor for their vehicles. Rumsfeld replied: "As you know, you go to war with the army you have. They're not the army you might want or wish to have at a later time." He added that the soldiers who were rigging their own armor might be killed anyway. "It's interesting ... if you think about it, you can have all the armor in the world on a tank and a tank can be blown up. And you can have an up-armored Humvee and it can be blown up."

Never before has a U.S. defense secretary been rebuked by the troops; never has a defense secretary insulted them. Two Republican mavericks, Sen. John McCain and Sen. Chuck Hagel, called for Rumsfeld's resignation, but they might as well have been whistling in the dark. Rumsfeld's disasters are Bush's. They are of such monumental dimensions that to lose Rumsfeld is to admit failure. Rumsfeld cannot be thrown overboard. It's better to blame the troops.

On Tuesday, Bush gave out honors for failure with his bestowal of the Presidential Medal of Freedom on Tommy Franks, the former CentCom commander, who allowed Osama bin Laden to escape at Tora Bora by not deploying U.S. troops to entrap him; George Tenet, the former CIA director, who jumped on the bandwagon for the Iraq war, enthusiastically informing Bush that the claims about weapons of mass destruction were "a slam-dunk"; and L. Paul Bremer, former chief of the Coalition Provisional Authority, who, among other blunders, disbanded the Iraqi army, clearing the path for chaos and violence. These awards are signs that failure will be celebrated as success.

The farcical unraveling of the nomination of former New York police commissioner Bernard Kerik as secretary of homeland security further illuminates the administration's methods. The fact that Kerik neglected to pay taxes on a nanny who was an illegal immigrant was a most convenient alibi. Beyond his multiple extramarital affairs, secret marriage and love nests, Kerik appears also to be married to the mob -- involved with members of the Gambino crime family. Yet Bush had been attracted to Kerik's Rambo-like aggression in the first place; the White House vetting process seems to be as credulous as the Mickey Mouse Club, and the impulse to cover up instant. The fall guy in this scenario is former New York Mayor Rudy Giuliani, Kerik's patron and partner. Inadvertently, Giuliani's tainting eliminates him as a moderate Republican pretender to the throne in the future. If only Kerik's foibles had passed beneath the radar, he might have been honored for any calamity. Thus the risks and rewards in Bush's imperial capital.