"America's Next Top Model," in which a panel of bizarre sadists shred the souls of genetically superior females, is the most entertaining, unpredictable reality show on TV. 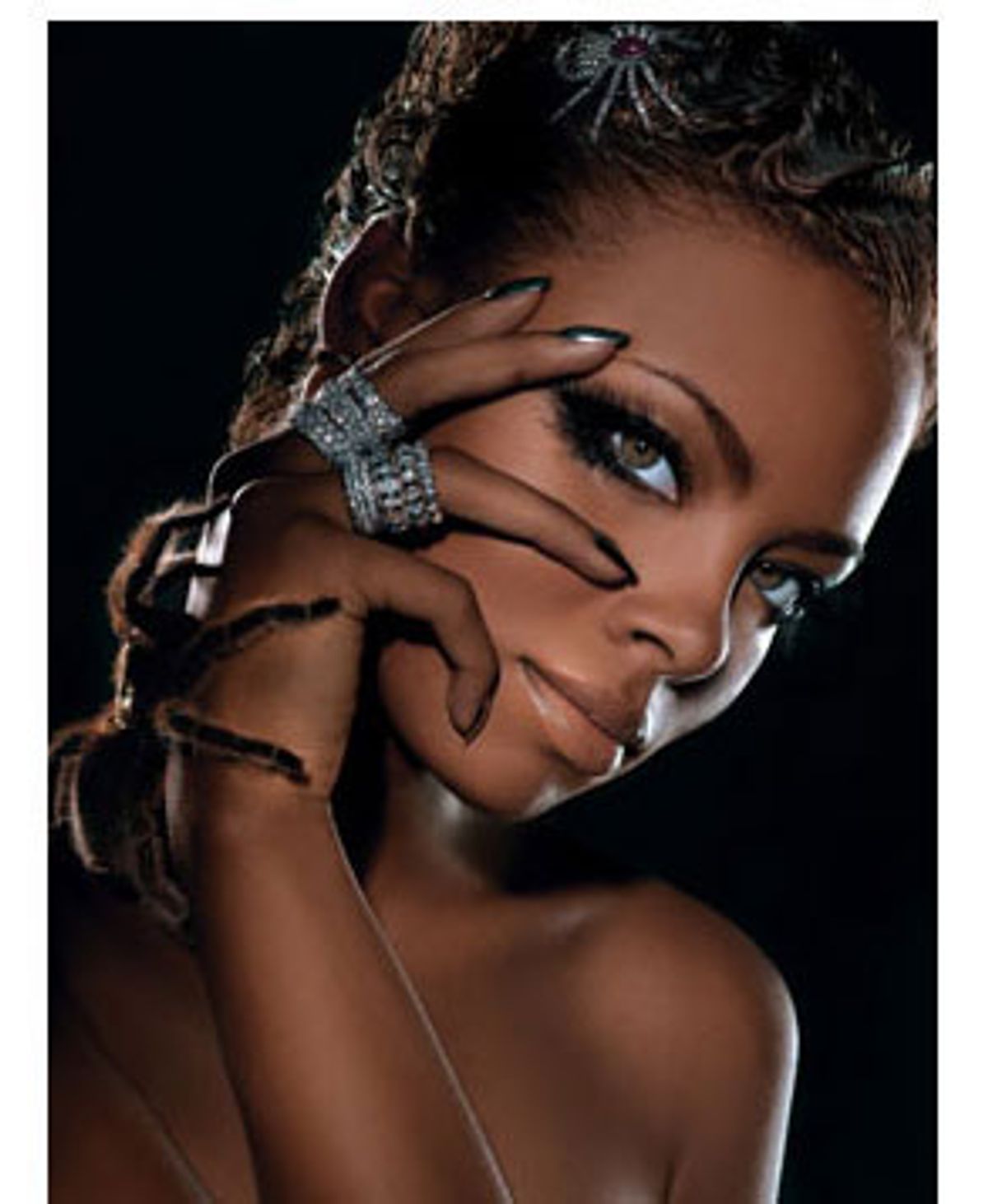 When I was 9 years old, I cut myself while trying to slice a Barbie doll's legs in half. I still have a scar. When I tell this story, men's eyes go wide, but women just nod knowingly. After all, who didn't administer a crewcut to an unsuspecting Superstar Barbie, after her bob haircut started to get boring? Barbies became irritatingly dull very fast, in fact. Once they've tried on every outfit they owned 50 or 60 times, once they've dated all the Kens and G.I. Joes and now Blaines, once they've trashed the Dreamhouse and wrecked the hot-pink Corvette, what's left? Why suffer another minute with those eyes so unblinkingly, twinklingly blue, those legs so stiff, those loins so unnervingly featureless? Why not see if those rubbery feet won't slice right off with some extra-sharp kitchen shears?

Last night, while I was watching the finale of UPN's "America's Next Top Model," I was reminded of just how thrilling it was to lay waste to a shoe box of innocent Barbies. It seems like it was just yesterday that Tyra Banks introduced us to this year's collection of aspiring models: Tall, beautiful girls with creamy, perfect skin, big doe eyes, legs a mile long, and great, big, beautiful dreams. (Tee hee hee!) Even then, though, we knew better. Even then, as the girls giggled and bickered and gasped over who would win it all, we knew what we'd end up with: a box of naked dolls with about a quarter-inch of yellow hair sprouting from the tops of their heads like mohawks, a faraway look in their sad, saucer eyes.

By the last few weeks of the season, without fail, the aspiring models go from being innocent and pretty and sweet to losing their self-esteem entirely. Why must you crush them, Tyra? Why must you rip these poor girls to little shreds? They come to you all beautiful and naive, and you cut and color their hair without asking their opinions, then you dress them up like mimes and drape them in pig intestines, or you give them big purple afros and make them jump around on trampolines in stiletto heels. Is it fair, Tyra? Is it really a good idea to force them all to get naked and roll around in bed with a live turkey while a 10-piece mariachi band plays in the background? It might be forgivable, if Jay Manuel didn't sprinkle birdseed in their belly buttons and then bitch about how "blank" and "lifeless" their expressions were. If they didn't crawl out of bed, weeping over the scratches and cuts from the turkey's claws, only to have Janice Dickinson announce that they look like "zombies" and their pictures are "absolutely repugnant," maybe then it would all be bearable.

Oh, but it would be far, far less entertaining! Just as there was something cathartic about the Barbie carnage of yore -- it seemed to cleanse the spirit of all those toxins created by wasting too many hours sliding little plastic mitten hands through narrow, silky sleeves -- so, too, is there something deliciously freeing about witnessing the slow but certain unraveling of these genetically superior humans.

Maybe the live turkeys and the pig intestines are a slight exaggeration, but not much of one: Each week it's a new challenge, from hanging 10 stories up to trying to look beautiful in an enormous fish tank. And, like any talented reality producer, Tyra knows just how to milk every ounce of drama out of this slow unraveling. Even after Amanda announced that she would soon be legally blind and Toccara couldn't find a single piece of clothing to fit her plus-size body and Eva hinted at some darkness in her past and Ann had a panic attack on a plane trip, there was more to come -- much, much more. Sure, nothing quite compared to last year, when the models jumped into a hot tub with a bunch of hot Italian boys and it turned into a full-on orgy, with poor Shandi phoning her boyfriend in tears the next day and admitting that she'd slept with one of the guys (she didn't mention that he was hotter than God, which was charitable of her). But between snobby, Brown-educated Yaya, who only pauses between self-righteous monologues to condescend to her fellow models, and Ann, who can't make her face into a discernible expression to save her life, but still shuns the unfaltering emotional support of her loyal friend Eva, this season has been rife with battles and weepy outbursts and nail-biters.

Of course, when you feature the sorts of sadists and masochists that populate the fashion world on your show each week, fur is bound to fly. Where do you even begin? With the fashion designer who took out a measuring tape and measured the hips of one of the models -- the one who also happened to be a bulimic? Or how about the Japanese designers who, upon hearing that Amanda was 25, sniffed and said, "Too old, too old!"

Such punishing conditions are all a part of the world of high fashion, you see -- or that's what Tyra says, anyway, and who's going to argue with Tyra? If this show is any indication, any supermodel worth her salt should be able to:

1. Read Japanese phrases off cue cards while reflecting her true, original personality
2. Weep on cue in acting class
3. Race up 10 flights of stairs, then pose for the camera without vomiting
4. Confess her deepest darkest fears to strangers while the cameras roll
5. Maintain a wide-eyed, soft, seductive look while a tarantula crawls across her face
6. Create convincing Tokyo street fashion from assorted separates
7. Listen with great interest as Janice Dickinson rips her a new asshole

And that's really just the tip of the iceberg. Predictably, by the end of the show, each of the girls seems to have misplaced her pride, her dignity, her self-esteem, even her will to live. Last week, when Ann was eliminated, and left Tokyo without hugging her supposed friend Eva goodbye, Eva looked hunched over and wilted, but blinked bravely like she would somehow find the strength to carry on in the face of rejection and loneliness thousands of miles away from home. Amanda even seemed a little bit deflated -- the fashion designers didn't love her street fashion, the judges didn't dig her anime-on-a-motorcycle photo shoot, and everyone keeps telling her that she only looks like a model in pictures, not in person (and that's supposed to help her how, exactly?). Ann's crisis of confidence basically got her kicked out of the running, since her constant frustration and whining further impeded her ability to make an expression, to the point where you'd swear she had a face full of Botox during her last shoot. All of the girls have been coming apart, piece by piece, week by week, except for...

Yaya. Yucky, awful, snotty Yaya seems to pull herself up by her bootstraps time after time. And Lord only knows the judges have been trying to deflate her ego. They snap at her. They tell her she's haughty. They denigrate her sense of style. But nothing works. Yaya is certain that she's the shit, and she's not about to let anyone -- not Tyra, not the rest of the metrosexuals, not nutso Jay Alexander in his high heels and shorty shorts -- take her down a notch. "Go ahead!" her face says. "Brandish those kitchen shears in my face! Make snipping sounds with them, even!" It's no use. She'll still put on her Erykah Badu head wrap and her little black T-shirt that says "Respeito" (That means respect, OK? Got it? Good.) and she'll toss her head back and tell you she's a smart black woman like she's the first smart black woman on the planet.

Meanwhile, another smart black woman, Eva, has gone from being utterly outspoken and angry to playing her cards just right, learning to pose and strut and choose the right fashions and kiss the right asses and avoid trouble even as trouble seeks her out. Eva has green eyes and cool curly hair and she's always been the most striking and the most graceful and the biggest personality of the lot, save only Toccara the plus-size goddess who was only around so Tyra could make a point about big girls before one of the metrosexual masochists on the judging panel sent her packing. Eva is no Barbie. Eva is that doll your aunt bought for you in Holland, the one with the black braids and the green eyes and the little brown clogs and the tiny feet that you never, ever have even the slightest urge to chop to little bits.

See, this is what makes "America's Next Top Model" so much less predictable and more fun than shows like "Survivor" and "The Apprentice" -- it's not based on the whims of fellow contestants, or worse yet, the whims of The Donald. (Who in the world thinks inept political femme bot Jen should have made it this far?) Tyra Banks and a carefully selected panel of extremely egocentric, bizarre, sadistic human beings pick out the next top model, and they do it by looking at actual photographs and footage of the girls strutting on the runway. These women do real work, as silly and staged as a lot of it is, so that by the time a winner is chosen, we have a very concrete idea of how good each woman might be at this profession.

We also know them all, and we have our favorites. Lordy be, do we have our favorites! By the time Amanda was dismissed, I was practically shaking, hoping and praying that sweet little Eva the anti-Barbie would win it all, and dumb Ann and bitchy Amanda and nasty Yaya would all have to eat crow. But I was fearful. I wanted it too much. I was bound to be disappointed.

I should've put my faith in Tyra from the start, though, because Yaya's bitter bun-head was summarily dismissed, and Eva won it all! A modeling contract, some money -- I can't remember the details, all I remember was seeing those big green eyes well up as Eva told the cameras, through tears, how she was just a tomboy, how she was never the cute girl in school... OK, whatever, we're still glad you won. In an instant, all of the carnage made sense, and somehow all those fallen Barbies -- dejected and crushed and ready to stick their heads in their Barbie "Bake With Me" Ovens -- they made this moment all the more thrilling. Sort of like the NFL playoffs, except more glamorous and dramatic and melodramatic and gay. In other words, better.

OK, so maybe you missed this season. No big deal. But next season, you have to watch this show. You'll thank me for it. And in the meantime, join me in a little prayer that Eva will get her Dreamhouse and her hot-pink Corvette. Let's hope she loses the sad, saucer eyes and gets her diva attitude back, too. She deserves it.