This adaptation of the popular children's book series gets so much right. So why does it feel so wrong? 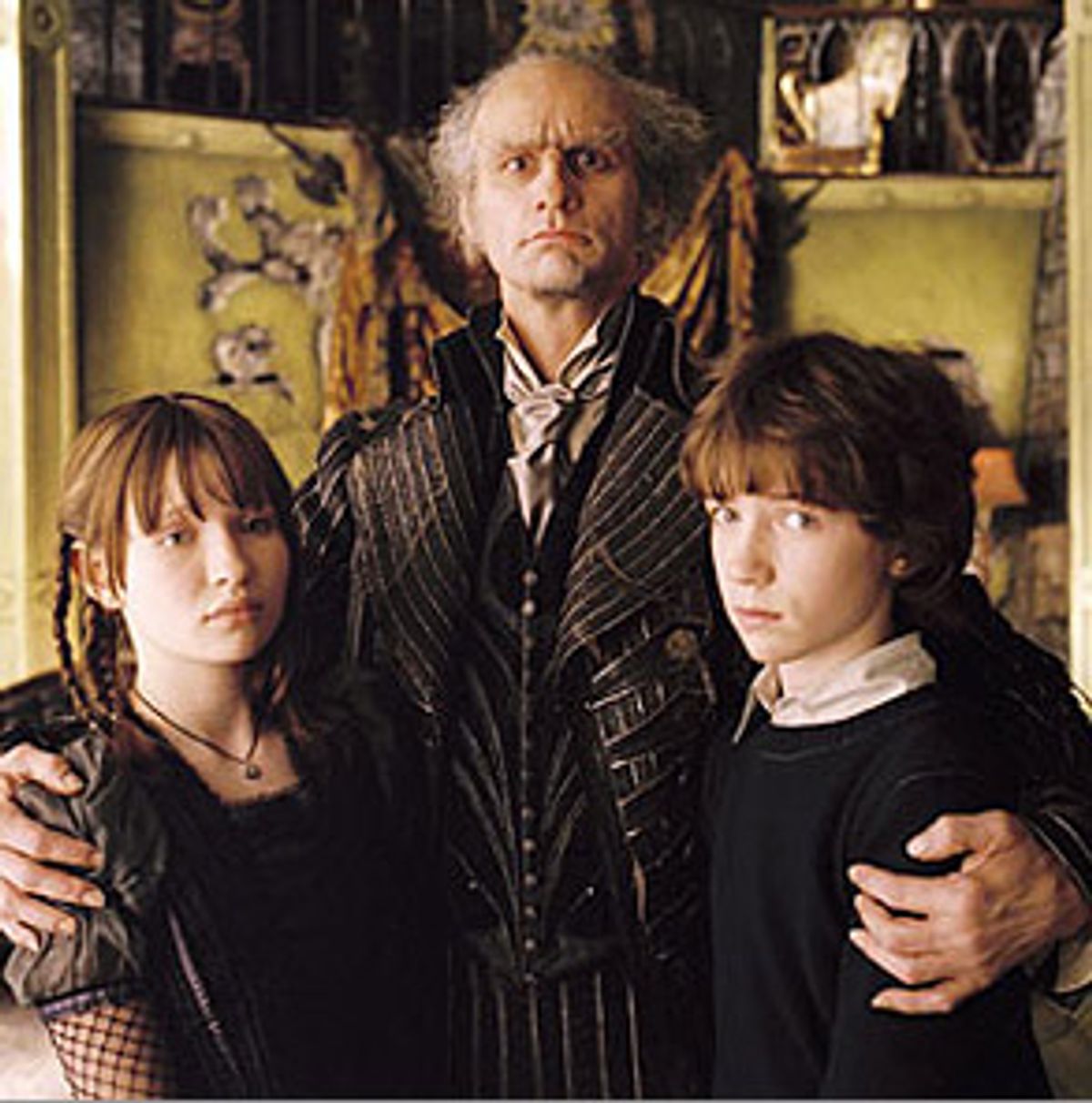 Most people who love to read hate to see Hollywood get ahold of their favorite books. But even more heartbreaking than a movie that gets a book completely wrong is one in which every detail, from the costumes to the faces of the actors to the production design to the spirit of the dialogue, is calibrated with exceptional thought and care to capture the essence of a book -- and is still mysteriously, inexplicably dull.

"Lemony Snicket's A Series of Unfortunate Events," based on the enormously popular series of children's books in which some very bad things happen to three very appealing orphans, is that sort of movie: As it ticks by, laboriously, it leaves you feeling that you should be enjoying it more than you are.

There's so much right with "A Series of Unfortunate Events" that it's hard to believe it goes so wrong. The story is narrated by a mysterious gentleman, seen only in murky shadows as he taps away at the keys of an old manual typewriter; he goes by the name of Lemony Snicket. (In real life, a boring construct with which we won't concern ourselves now, Lemony Snicket is the pseudonym of novelist Daniel Handler; in the movie, Lemony Snicket is played by Jude Law, and his crisp enunciation perfectly suits the sorrowful Victorian undertones of Handler's pleasurably grim work.)

Lemony Snicket is here to tell us the story of the Baudelaire children -- three "clever and reasonably attractive orphans" -- who embark on a shaky adventure after their home burns down, killing their parents. Violet (Emily Browning), at 14, is the eldest: She's a serious-minded girl with a knack for inventing things. Klaus (Liam Aiken), the middle child, is a brainy book-lover who retains every word he's ever read. And Sunny, barely more than an infant (she toddles about swathed in velvet Victoriana), has the unique distinction of being very good at biting things -- sometimes right through things.

The Baudelaire siblings are deposited with the closest living relative, in this case the wiry, conniving Count Olaf (Jim Carrey), who lives in a dark, craggy house that's a far cry from the cozy mansion the children are used to. Count Olaf wants nothing to do with the children -- he makes them sleep in a cold, tiny room, and assigns them a double-digit list of onerous chores every day -- but he's very interested in the fortune that their parents have left them. So to get his hands on it, he comes up with one outlandish scheme after another, and the Baudelaire orphans, by their wit, their cleverness, and sometimes just their skill at biting, outwit him each time.

But this is, as Lemony Snicket repeatedly reminds us, not a happy tale: "This is an excellent opportunity to leave the theater, living room or airplane where this film is being shown," he warns at one point. The horrible mishaps that befall the Baudelaire orphans are what give the Lemony Snicket books their distinctively smart, dour character. (The 11th installment was published in September; the series, when completed, will comprise 13 books total.)

Set in an era that's not quite Victorian and not quite modern, these are darkly funny versions of 19th century kids books in which punishments and tragedies were vividly outlined for the sole purpose of scaring the bejesus out of impressionable little minds. The Lemony Snicket books have a wry, Edward Gorey-style elegance, and kids love them -- stylistically, they're the missing link between jet mourning jewelry and glitter glue.

Brad Silberling, the director of "A Series of Unfortunate Events," clearly has a grip on the mood of the books -- he has said he was aiming for a cross between "Mary Poppins" and "Night of the Hunter," which sounds just about right. The picture was shot by the extraordinarily gifted Emmanuel Lubezki ("Sleepy Hollow") in rustley satin tones of gray and green.

The characters, from Carrey's Count Olaf (who has long, rangy eyebrows brushed into swooping, wispy peaks) to Meryl Streep's dithering, agoraphobic Aunt Josephine (who wears her hair in a loose bun that flops indecisively around the top of her head), strike the proper notes of menace and benign eccentricity as needed. Appearances by Timothy Spall, Cedric the Entertainer, Catherine O'Hara and Scottish comic and actor Billy Connolly are fun, even if they don't amount to much. And, most blessedly of all, "A Series of Unfortunate Events" doesn't have the manic desperation of so many contemporary kids movies: It isn't noisy or boisterous or loaded with garish action. Silberling seems to be more interested in his characters than anything else, and he trusts that his audience will be, too.

With all that going for it, "A Series of Unfortunate Events" should work -- and yet it doesn't. Its pace is tedious and pokey; sometimes there seems to be too much slack between the characters' lines, as if they (or Silberling) weren't quite sure how to hit the right rhythms.

Carrey is, at times, a pleasure to watch: The picture allows him to unleash some of his gangly physicality -- he strides, crab-walks and skitters through it like a malevolent daddy long legs. But as funny as he is, his mugging becomes a little wearisome. I'm beginning to think that even though Carrey is a brilliant comic, his dramatic roles (as in "Eternal Sunshine of the Spotless Mind") have both more depth and more surface texture than his recent comic ones -- they may not have the same crazy energy, but they seem to challenge him in ways that often startle us, too.

The episodic nature of "A Series of Unfortunate Events" causes some problems too -- the story moves from here to there in a series of discrete jumps, and Silberling can't quite build and sustain enough tension to hold these sequential bits of story together. The movie doesn't really have an ending, and worse yet, its feeble attempt at a wrap-up just gives us a tidy, comforting summation that the real Lemony Snicket would never countenance.

That said, "A Series of Unfortunate Events" does have its share of wondrous moments, as well as some just plain funny ones. Sunny (she's played by Kara and Shelby Hoffman) is one of the movie's most endearing and mysterious characters. Her lines consist mostly of monosyllabic exclamations like "Ga!" and "Woo!" but subtitles reveal what, in her brilliant but as yet nonverbal mind, she's really thinking. And she has a fine moment in which, cooing and giggling, she snuggles into the embrace of a reputedly deadly python.

In the loveliest bit in "A Series of Unfortunate Events," the miserable orphans huddle in their damp, gray room, but with the few possessions they were able to retrieve from the rubble of their wrecked mansion, they make it feel like home. Violet has rescued a set of framed silhouettes of the orphans' mother and father, drawn on glass and connected by a hinge; Klaus has salvaged a magic lantern. They string up an old curtain, using it as a kind of scrim, and turn the space behind it into a refuge. We see the three of them in silhouette, laughing and talking, the benevolent profiles of their dead mother and father hovering just above them.

Once a family, always a family, is the unspoken message, and it's a profound but unsentimental one. Yet "A Series of Unfortunate Events" creeps along too sluggishly to have much of an impact. If only it moved like "Night of the Hunter." By commanding our attention, it might have stood a better chance of capturing our love.