Digital fashion design ain't as easy as it looks

The computer-generated clothing in Pixar's "The Incredibles" required real tailors and years of programming. 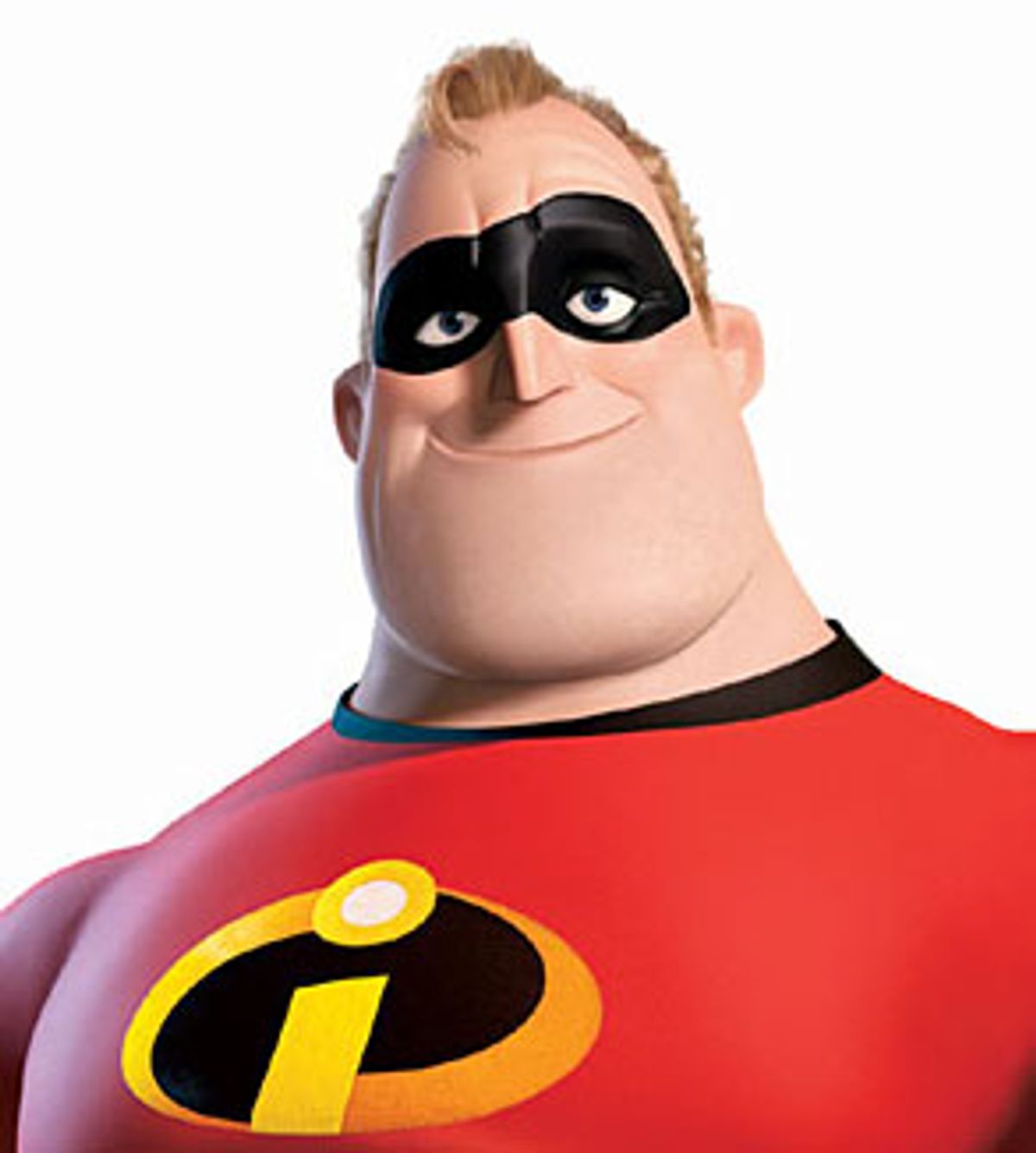 Contrary to its Hollywood ending, the real hero of "The Incredibles" is Edna Mode, fashion designer to the superheroes. Edna faces a daunting task: outfitting the bulgiest of the bulgy, the stretchiest of the stretchy and the fastest of the fast with premium-grade supersuits that must be able to accommodate things impossible for your average jeans and T-shirt. Any reality-based fashion designer or tailor would run screaming and crying from such challenges. (Vera Wang may range from business casual to eveningwear, but will her clothes stand up, in style, to an arctic-blast-to-inferno scenario, like Edna's creations do? Um, no.)

But who would have guessed that Pixar's real-life computer animators face the same difficulties as Edna? To create costumes for computer-generated (CG) cartoons, you must tailor each garment and stitch every stitch to fit each actor. And when dealing with an actor who's almost seven feet tall, with an 86-inch chest and 52-inch waist, who needs to be able to throw cars, a tailor has her work cut out. In "The Incredibles," animated life imitates animated art. Mr. Incredible may be incredible, but he can't even begin to understand the geometric algorithms necessary to keep his little butt clothed. Welcome to the fabulous world of animated fashion.

It seems only logical to think of animation as a two-dimensional flat surface, where what is present is always visible. For example: You may never consider the internal workings of Pepe Le Pew until a hot lady skunk saunters past, thereby causing his heart to leap out of his chest and pound with animated love. But really, this is the only time that Pepe has a heart; when the lady skunk exits stage left, the animator is no longer rendering Pepe's guts. But in CG animation, what lies beneath the surface is another surface, another plane of animation, creating layer upon layer of supporting effects that allow artists to render holistic environments and believable characters. What is hidden beneath is a massive support system, essential to creating alien beings and foreign worlds. Whether it's flabby old retired Bob or the hulking, toned body of Mr. Incredible, the clothing definitely made the man possible.

Creating CG clothing is a strange undertaking; it is both similar to creating real clothing and absolutely nothing like it. Costumes are created sleeve by sleeve, pant leg by pant leg, stitched together in virtual space via pattern-making computer software. This is because CG actors are more like animated puppets than flat drawings: Clothing must actually fit onto a character's body as a pair of pants would fit onto a three-dimensional person. What animates the clothing is a cloth simulator, a program that teaches the computer how the cloth is to behave in different circumstances. Creating this simulator took years of research and experimentation by Pixar's aptly named Cloth Team, led by programmer David Baraff.

But to simulate an outfit, you must first have an outfit to simulate. Enter Christine Waggoner, Pixar's real-life Edna -- well, without the accent or attitude.

Waggoner is one of the rare individuals who understand both algorithms and A-lines. Taught how to sew by her mom, Waggoner began creating garments at age 12 for a local theater in Connecticut in order to earn a Girl Scout badge. She stuck with it way beyond the badge, and by the time she hung up her sash and was ready for college, Waggoner had already lived a minicareer in costume design. Burned out on theater, she chose to study international relations at Brown University. In an accident of destiny, part of the major's requirement was a computer science course. She became fascinated with computer graphics and, in a natural extension of her interests, became intrigued by the idea of computer-generated clothing.

Prior to 1998, when she was finishing up school, CG clothing was mostly the stuff of theory. But at the time, Waggoner's soon-to-be-colleague Baraff was also interested in CG clothing and studying its simulation. Waggoner ended up working at Pixar on rendering and models for "Toy Story 2" but always kept the realization of CG clothing as a future goal.

The T-shirt worn by the character Boo in "Monsters, Inc." marked Pixar's first successful venture into cloth simulation. Until that point CG cloth technology was not advanced enough to imitate the realistic interactions clothing has with a moving body. It was unable to achieve the complex folds and creases that occur when an elbow bends or legs cross. As a result, clothing appeared stuck to the body with an unnatural rigidity, creating an unconvincing effect. Boo's T-shirt paved the way for "Finding Nemo" in 2003, and Nemo's success allowed for the realization of the cast of "The Incredibles" and the first large-scale use of CG clothing.

Waggoner and the Cloth Team created over 140 garments for "The Incredibles" -- a massive, labor-intensive process that took over three years to complete in spite of the efficiency offered by virtual tailoring. To create each piece of clothing, tailor Maria Cervantes was hired to help create the costumes. "There were often times that I wished I could go shopping for a garment," says Waggoner. "Unfortunately, the proportions of our characters are so extreme, I would never be able to find such a garment. And of course things from the physical world cannot be imported into the computer without digitizing them or modeling them."

Waggoner worked with Cervantes and several other artists to create individual costumes for each character in each of his or her representations: There was a fat Bob, a thin Bob, a pre-retirement Mr. Incredible and Edna's new-and-improved Mr. Incredible. And that was really just the beginning.

"The characters were modeled in a multilayered fashion which attempts to emulate the physical world," Waggoner explains. "They all had muscles, skin and clothing. We used this approach in an effort to create a higher level of realism: muscles sliding under skin, and cloth sliding, resting or folding over skin. Some of the characters even had undergarments. Edna had a petticoat to support her dress. Bob had briefs sewn to his shirt to keep the shirt tucked in." (She learned that trick costuming dancers in the theater.) So was Bob as demanding as he seemed when dealing with Edna? "The actors don't complain about their costumes, but they also cannot tell you where it's too tight," says Waggoner.

Despite the seeming ease of computer-aided efficiency, challenges persisted. "We must model/simulate every detail of a costume, of the world," says Waggoner. "And this essentially boils down to mathematics and algorithms. What's the model/function for a ruffle, a shoulder pad or a bustle? If we wanted atomic accuracy, are their computers fast enough to handle those quantities of data? Is such an approach practical or necessary?"

In the movie, illustrated through a series of tragic instances, Edna recounts the many superheroes of the past who were ultimately done in by cape-related injuries --- snags being the most common danger. From Waggoner's perspective the cape problem is real; in CG animation capes present a litany of potential problems, the most difficult of which is the dreaded tangle -- in which a piece of cloth collides with itself. It's difficult for the computer to differentiate between the "wrong" side of the fabric and the "right."

So if you aspire to cartoonish superhero proportions, where your massive muscles and barrel chest allow you to leap computer-generated buildings with single, animated bounds, you should take a lesson from Mr. Incredible: Sew your underwear to your shirt. Congratulations, mere mortal, you're on your way to the life of super CG heroics.

Sarah Lidgus is a writer and grad student in Visual Criticism at California College of Arts and Crafts in San Francisco.