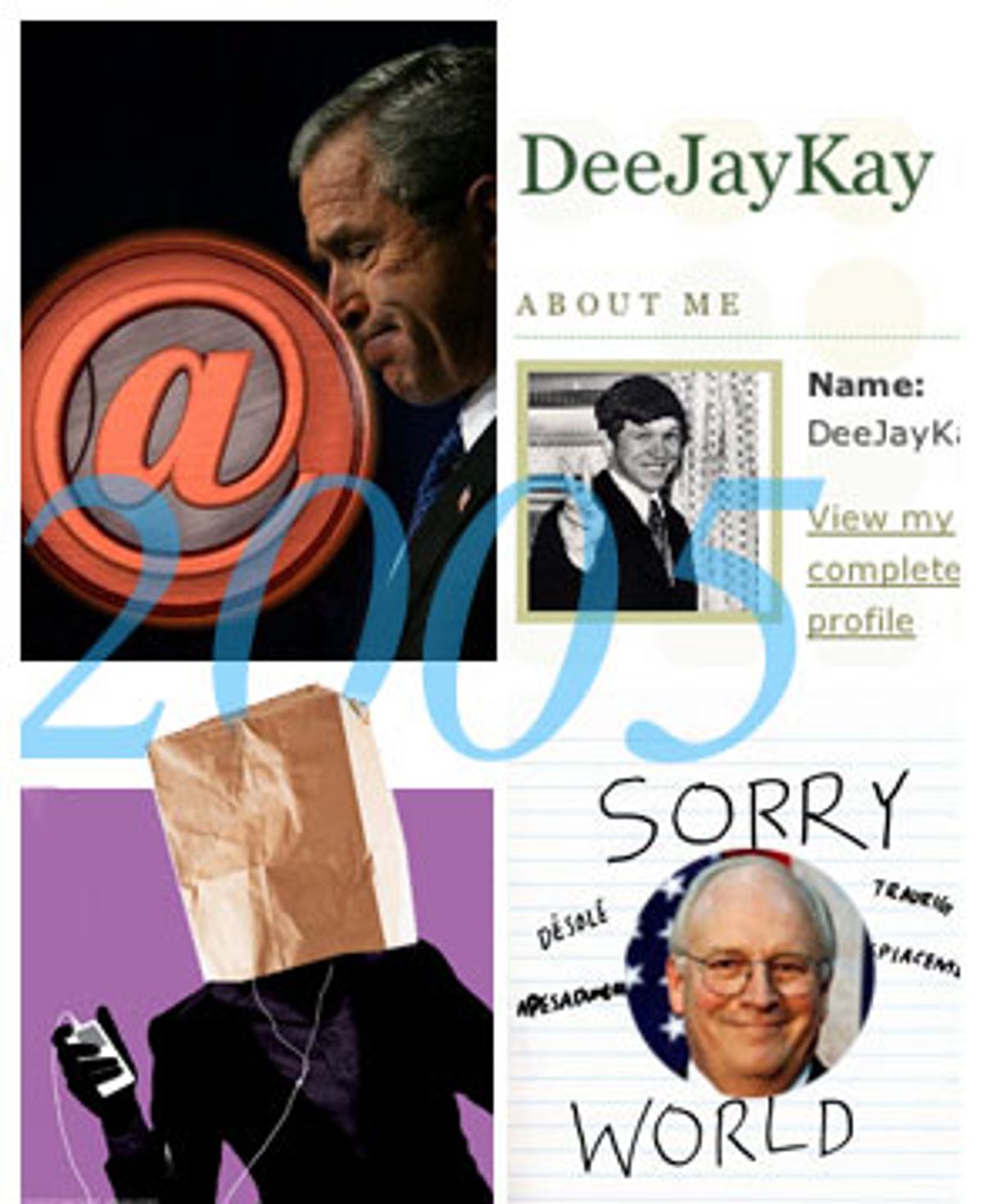 During the first year of George W. Bush's second term the situation in Iraq will become increasingly graver, the Palestinians and the Israelis will escalate their conflict, the United States' nuclear standoff with Iran and North Korea will grow dangerously tense, China will come precipitously close to attacking Taiwan, global warming will wreak devastation across large swaths of the planet, and Osama bin Laden will roam so freely in Afghanistan that Al-Jazeera will offer him a weekly talk show. But defying the predictions of all political analysts, Bush's job approval ratings in the United States and across the globe will soar to record levels, with even the blue states turning red. Why? Because he'll have managed to rid the world of spam.

Sometime this summer a well-connected friend of Bush's will send him a coveted invitation to Gmail, and while Bush will become instantly enamored of the service's friendly interface, he'll find himself spending too much of his time writing "No thank you, make no mistake, Laura is quite satisfied as it is" to unsolicited offers that come in via e-mail.

Notwithstanding the warnings of his closest advisors, who believe that tackling spam will be more difficult than putting down the insurgency in Iraq, Bush decides that something must be done. ("Karl," Bob Woodward will later quote Bush as telling Rove, his political guru, "maybe you don't mind being sent the phone numbers of all the lonely housewives in your neighborhood, but I don't think the American people feel the same way about violating the privacy of our nation's lonely housewives.") Bush convenes a historic summit of the world's top tech leaders and brightest academics at Camp David, and refuses to let the brains leave until they've hammered out a solution to the spam scourge. In a few weeks, they come up with a plan, and Bush authorizes Donald Rumsfeld to divert the billions intended for missile defense to this new anti-spam Manhattan Project. The plan is a phenomenal success -- by year's end all unwanted mail has been stopped, and Congress unanimously passes legislation drawing up plans for Bush's bust to be carved into Mount Rushmore.

Just weeks after announcing ambitious plans to digitize millions of books from five major libraries, Google burns down its electronic Alexandria before even really starting it.

The problem isn't the anticipated copyright headaches. It's the readers -- or lack thereof.

"When news of our plans broke, we were flooded with e-mails from college students begging us to make more term papers available, not books," says a Google executive who asked not to be named. "The kids told us that they have plenty of access to books on paper that they don't read. What they really need is someone to do the reading, thinking and writing for them."

Convinced that absolutely no one wants to read most of the tomes they'd just begun digitizing, Google decides to divert the tens of millions designated for the book project into hiring underemployed Ph.D.'s to build up the world's biggest virtual term-paper library.

The once-thriving economies of MMORPGs -- massively multiplayer online role-playing games like "The Sims Online," "Ultima Online," "Everquest" and "Second Life" -- plunge on reports of accounting irregularities and cooked books, prompting a call for stricter regulation on the activities of virtual crony capitalists. While fat cats like Julian Dibbell -- a writer who, very suspiciously, managed to make about $47,000 during a year of trading in the virtual economy -- insist that the scandals are just the work of a few bad apples and that in general virtual executives are as honest and ethical as any other business people, Americans erupt at the outrageous disclosures.

Investigators uncover shady extraworld entities that virtual firms set up in order to escape taxes, or complex financial instruments established to artificially inflate the bottom line, and we all recoil at the tales of extravagant habits of virtual CEOs. "While these slimeballs spend 100 million Simoleans to build their garish mansions in gated communities in 'The Sims Online,' others in these virtual worlds live hand-to-mouth, constantly worrying about where the next meal will come from," Arizona Sen. John McCain scolds from the Senate floor. "This must stop." McCain then authors legislation to create a Securities and Exchange Commission task force to closely monitor the freewheeling capitalists of MMORPGs, but though the law passes Congress by huge margins, the president will vetoes the legislation, explaining that the bill would unnecessarily restrict the freedom and creativity of virtual business people. Reformers, though, remain suspicious of Bush's motives, noting several large contributions to the GOP denominated not in dollars but in Simoleans.

Dennis Kucinich is a decent, honest man, and he believes that to lie to oneself is the gravest sin a soul can commit. That's why when he asks himself the toughest question he can think of -- "Dennis, honestly, did any good come out of your campaign for the presidency?" -- he replies with candor: "No, old fellow, not a bit a good came of it." This is what one learns, at least, from Kucinich's new blog, a curious, casual thing the congressman has put up in an effort, he writes, to show America his personal side.

As Kucinich points out, in recent years it has been bloggers, more than fringe presidential candidates, who've become the leading voices calling for a new direction in this country. Bloggers "sold themselves to the people on the Web, and thanks to that they managed to effect actual political change," Kucinich writes in one of his early posts. "Markos of Daily Kos was even invited to the Democrats' convention, which is more than I can say for myself!"

It's a grand experiment -- and indeed, we predict, it will become a sensation, leading the congressman to the very doorstep of the White House. Over the next four years, Kucinich's blog, full of wry observations on American culture and lovably corny meditations on his life as a bachelor, will win over even the most reactionary Americans -- you may well be skeptical of the congressman's plans to create a Cabinet-level Department of Peace, but how can you resist a man who describes his troubles with household ants in such blindly philosophical terms as these: "You'd suppose that I'd be able to ignore these tiny creatures, but you'd be wrong: A man's heart is not settled when his land's been violated. How can I ponder the finer points of democracy when I've been usurped in my own home? As I've said a million times before, freedom does not flourish under occupation."

Or read his thoughts on TV: "There is nothing more to say than this: South Park's season finale Christmas special, which I just caught on TiVo, is a work of genius. Can any more be said? ... No writing could justify the brilliance. Folks, trust me on this: Watch this show. You'll thank me for it."

Such a blog is not the work of any mere politician. In time Americans will come to recognize it as the voice of a knowing, confident and exceedingly wise observer of the American political and cultural landscape -- one we'd do well to elect as our leader.

Tired of being lambasted for working employees seven days a week, Electronic Arts hires a "senior vice president of global sourcing" and outsources all programming, design and art for its games to India, China, Malaysia and the Philippines.

"We realized our market is global, so why not put these jobs in places where people are grateful for the opportunity to have them?" the company says in the press release announcing the initiative, which sends its stock price up $11 a share.

One of the most vocal critics of the company's labor practices, the woman known only as EA Spouse, is not available for comment at press time; she's too busy working three jobs to support herself and her laid-off fiancé.

Tech industry analysts are taken aback by a sudden, precipitous drop in sales of the once mega-popular iPod, but people in the entertainment world -- all too familiar with the volatile winds of cool -- know instantly why the shiny white player so quickly fell out of favor with the public: overexposure. When the iPod was new, seeing a fellow podder pass you on the street -- his eyes vacant and his ears tricked out in white molded plastic -- was a pleasant, comforting thing. You felt an instant bond with this like-minded traveler in music, warm in the knowledge that you were both of a select class of early-adopting aficionados who knew the value of good design, of good sound, of living well. You drove a Mini, you bought your arugula salad at Whole Foods, and you played Philip Glass on your iPod: This is who you were, and they weren't going to take it away from you.

But then came the masses to crash the iPod club. Apple sold itself to the Windows millions and opened an online store to hawk the shallowest pop -- when the company began calling on John Mayer to shill for it, the writing was on the wall. Pretty soon everywhere you looked you saw those white headphones, and now, instead of a smiling solidarity, you were annoyed. These people weren't iPod worthy. And the worst thing was the fear that others, others perhaps cooler than you, were thinking the same thing about you when you ventured out in your white headphones -- that you were a newbie to the iPod movement, that you too had just jumped on the bandwagon.

And so, like that, slowly in 2005 all the beautiful people stash away their iPods and move on to something else. Even Apple's CEO Steve Jobs, ever mindful of what's hip, comes to see that his iPod is bringing him down. In time we all drop our pods; the player lives on only in VH1 specials commemorating the crazy fads of yesteryear, like mood rings or snap bracelets or the Spice Girls. In a few years' time we'll look back on old pictures of all those white-headphoned folks and chuckle, "What were we thinking?"

Dick Cheney apologizes on the Sorry Everybody site

While keeping tabs on traitorous blue-staters, Vice President Dick Cheney stumbles on Sorry Everybody, and has a change of heart. He's so moved by the thousands of apologies from his fellow Americans to the rest of the world that he's inspired to post his own.

In a blurry digital picture, his plaintive mug peers out above an endearing handwritten note, which reads: "I am sorry I scared Americans into electing -- I mean reelecting -- us by fear-mongering about terrorists using nukes to take out shopping malls. And I feel really bad that we invaded the wrong country. I am really, really sorry."

The fallout from the unexpected apology causes friction with President Bush, who really isn't sorry for anything he has done. Cheney resigns, and uses all the money he made at Halliburton over the years to start a foundation to rebuild civil society in Iraq, investing millions in schools, education and healthcare.

Wonkette, DailyKos and Atrios lead the charge for blue Americans to secede from the Union, and join forces with their northern neighbor, by moving their Web addresses to .ca domains.

Burned out on reading about politics post-election, no one back in the United States notices until 2006.