Who needs a spanky?

The exploitative "Who's Your Daddy?" is too stupid to get worked up over. But Americans might want to question the Fox idea of family. 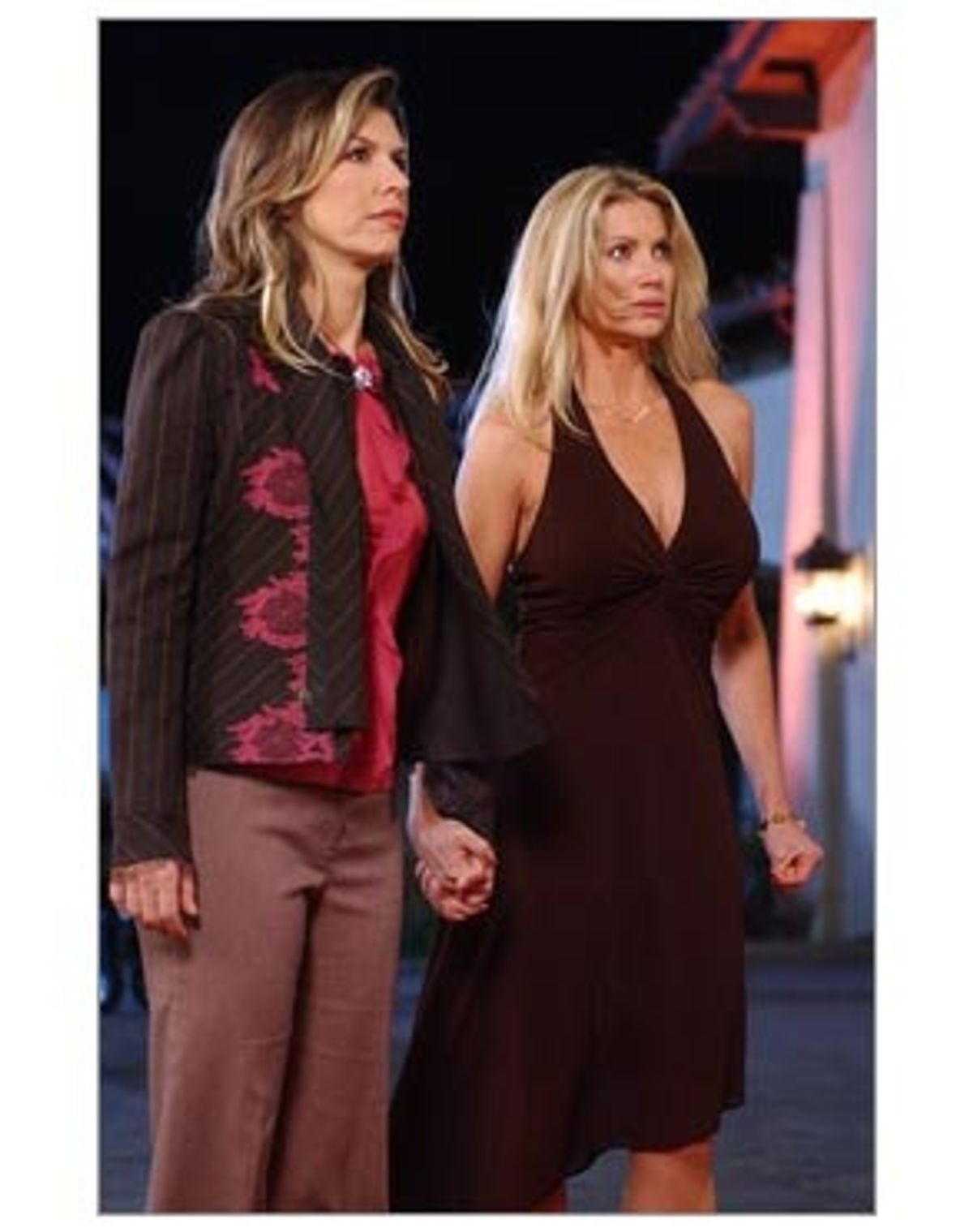 On the corkboard above my 4-year-old son's bed, there is a photograph of a young Vietnamese woman in a polka-dotted blouse and blue jeans, sitting in a Ho Chi Minh City garden with a baby in her lap. The baby is my son. The woman is his birth mother. And the picture is there because, on Mother's Day 2004, my son, for the first time in his young life, became curious about the woman who had brought him into the world. We showed him the pictures, we told him her name, we told him as much as we knew about her (not much). He listened and then, very quietly, asked if he could keep one of the pictures in his room. And there it sits, on the wall over his bed.

I wonder now. What if, instead of giving him this picture, I had given him pictures of eight different Vietnamese women? And told him to guess which one was his real mom? And given him an ice cream cone for picking the right one? In short, what if I had made a game out of his simple desire to know his birth parents?

I didn't consider it at the time, but then I am neither Scott Hallock nor Kevin Healey, the brains behind Fox's "Who's Your Daddy?" a reality show that rivals last fall's "Wife Swap" for drooliest title and the recently aborted "Seriously, Dude, I'm Gay" for worst pre-release publicity. As soon as adoption activists got wind of the show's premise -- a young woman wins $100,000 if she chooses her biological father from a group of eight men all claiming to be Dad -- they got busy denouncing it. "Repulsive," said Joseph Kroll of the North American Council on Adoptable Children. "It takes a deeply personal and important experience and turns it into a money-grubbing game show," said Adam Pertman of the Evan P. Donaldson Adoption Institute. And in a letter to Fox president Peter Chernin, the president of Families With Children From China denounced the program (sight unseen) for its "circus-like atmosphere" and called it "a new low for the Fox network."

Well, I'm here to say it's just the same old low. We live -- don't we? -- in a cultural age where every human moment, from conception to death, can now be squeezed into a few minutes of electronic epiphany. Marriages are brokered, families rejiggered, bodies mutilated, careers launched. One way or another, we are all -- moms and dads, midgets and millionaires, gays and straights, Trumps and Hiltons -- dragged onto the great national midway. The proper question is not "Why adopted children?" but "What took Fox so long?"

So when I sat down last night to watch the pilot episode of "Who's Your Daddy?" I was curious to see if the pit really was being dug deeper. Which meant that I first had to get beyond the tawdriness of that title. Christ! If Fox execs, without qualm or demurral, could attach a sexual connotation to the search for a lost parent, I had to wonder what else they kept in their bulging pockets. And I didn't feel any less queasy in the opening segment, when T.J., the young heroine, approaches in a black cocktail dress with plunging neckline. She may be going to find Daddy, but with her blond locks and round, moist eyes and surgically enhanced lips, she looks ready to lasso a daddy or two before she's done. (It turns out that T.J. does, in fact, have soft-core porn experience.)

After meeting the paternal octet over cocktails and studying them via surveillance camera, T.J. must, according to the show's rules, narrow them down to four. ("I don't think you're my father"; "I feel like you could be my father.") Knowing that her real dad was a prize-winning disco dancer, T.J. must then take the remaining four onto a dance floor to watch their moves. Two more are eliminated. The final two sit down with T.J. for private confessionals, drop off gifts (a sketch, a stuffed black Lab), and leave T.J. to make what the announcer insists is "the biggest decision of her life."

In fact, it's not. It's merely a financial decision. If she picks correctly, she gets as much as $100,000; if she doesn't, the man she chooses walks off with the dough. But we know the Fox producers won't punish a wrong choice by denying her access to her birth father. (That's next season?) No amount of stumbling or stuttering will forestall that long-awaited reunion, and so the game-show mechanics pretty quickly give way to the winding, wrapping trail of T.J.'s tears.

And, oh, those tears flow like wine. There's more crying to be had in a single episode of "Who's Your Daddy?" than an entire evening of Marsha Mason movies. And through every ablution, T.J. presents her damp face to the camera without a trace of reticence, without any sign that her private experience is being shaped into a public fiction. If "Who's Your Daddy?" is emotional pornography, as its detractors imply, then those same detractors must acknowledge that the T.J.s of this world are more than willing participants -- they are active co-conspirators. (It's what every critique of reality TV must contend with.) In vain did I wait for our heroine to toss off some variant of Phoebe Cates' immortal line from "Lace": "Which one of you pricks is my father?" In vain did I search her face for some sign of impatience over all the steeplechases thrown in her path. No, this filly is game from the get-go, hugging the hostess (grinning, tensile-necked soap queen Finola Hughes), skidding through every plot twist, giggling through the tears. She even manages to thank the impostors who've been trying to milk her of $100,000! (After one rejected candidate announces how proud he was to be "part of the journey you're on," T.J. answers, "I'm very glad that you were.")

So, if there is an unseemly lesson to be drawn from "Who's Your Daddy?," it's simply that adopted Americans are as willing as anyone else to parade their rawest and most intimate exchanges before the marauding camera eye. And if there's an unspoken lesson, it's that the families once wrongly tarred by society as "illegitimate" are, by the new rules of reality TV, the only truly legitimate ones. The climax of Episode No. 1 comes not when T.J. (correctly) picks Daddy but when the show's producers, in their own little coup de theatre, bring out long-lost Mommy. Mother embraces Daughter. Father, looking on with tear-soaked countenance (and with three of his other daughters standing behind him), announces: "We're a family again."

And the whole business is a staggeringly literal reenactment of the fantasy that, at one time or other, haunts many an adopted child: the myth that she will one day escape the stifling climes of her adoptive home and find solace and eternal happiness with the two people who gave her life. It's Oliver Twist, it's the Little Princess, it's Orphan Annie, and there's no denying the fairy-tale pull it still exerts, but all the same, I couldn't help thinking about the family T.J. left behind -- the family she makes only passing reference to -- the family that is quite prominently omitted from that final tableau. Indeed, in a show that makes such a fuss about answering questions, the one that's never even addressed is: Why, among all the people T.J. thanks, does she not single out the man and woman who raised her?

Like most reality shows, "Who's Your Daddy?" is too panderingly stupid to get seriously upset about. Scott Hallock and Kevin Healey are no worse than any of their gimcrack counterparts. Fox television has not yet stamped out civilization. But when it comes to deciding what a family is, it may be wise to look to sources outside of Fox. I'm going to say goodnight to my son now.