Not with a bang but a whimper

As the protest against Bush's certification fell flat and they rolled over for Gonzales, it was a day of humiliation and futility for Democrats. 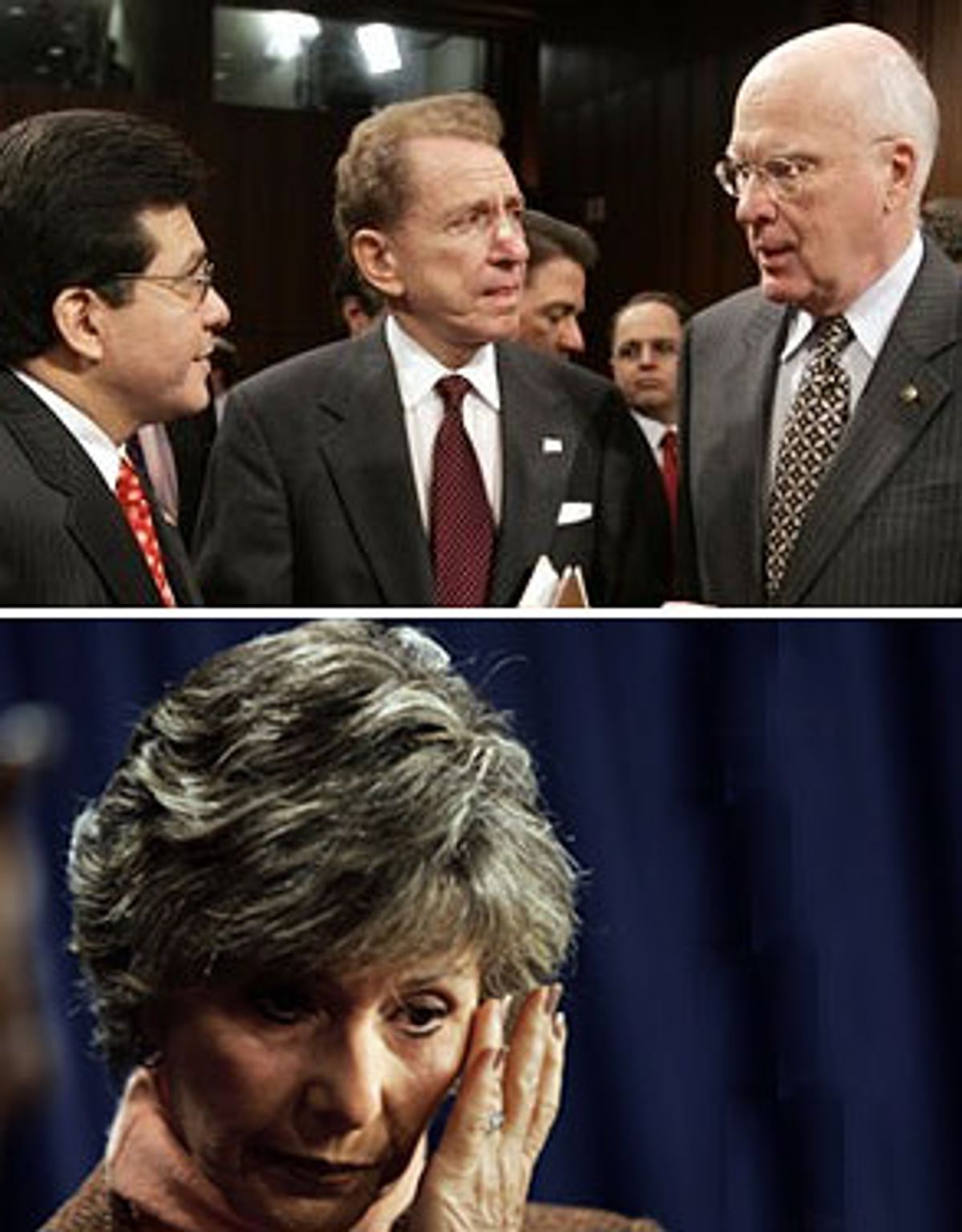 For an hour or so Thursday morning, Alberto Gonzales had played a lawyerly game of Slip 'n' Slide with members of the Senate Judiciary Committee. That 2002 memo in which he called portions of the Geneva Convention "quaint" and "obsolete"? Gonzales disavowed it. His view of the president's powers during wartime? A "hypothetical" question that Gonzales wouldn't answer. The legal opinion that seemed to authorize torture by U.S. troops? Gonzales said he couldn't remember who asked for it, then blamed the Department of Justice for the conclusions it reached.

Democratic Sen. Joe Biden sat quietly, listening to it all. On another day, in another political reality, he might have been watching a presidential nominee self-destruct. The man who would be attorney general was coming off as evasive, as ill-prepared, as unwilling to accept responsibility for anything that happened on his watch as George W. Bush's White House counsel. But when Biden finally had his chance to put a question to Gonzales, he delivered this clear message instead: "You're going to be confirmed."

Thursday was the first serious work day for the 109th Congress, and it was a day of humiliation and futility for the Democrats who still have jobs on Capitol Hill. Republicans picked up four Senate seats and three House seats in November, and signs of the Democrats' increasing powerlessness were everywhere Thursday. In a hearing room in the Hart Senate Office Building, Biden and his Democratic colleagues went through the motions of questioning an attorney general nominee whose confirmation is a foregone conclusion. On the floor of the House of Representatives, a handful of Democrats launched a meaningless protest against the certification of Bush's reelection.

For Democrats, the election protest was at least a momentary triumph. Four years ago, with Al Gore presiding, Congress met in joint session to certify the results of the 2000 election. One after another, African-American members of the House rose to protest the vote from Florida, where thousands of black voters had been disenfranchised and the U.S. Supreme Court had called off the recount. Again and again, the members were gaveled down because they couldn't get a single senator to join them in protesting the election results.

It was different this time. When Ohio Rep. Stephanie Tubbs Jones rose in the House chambers, she announced that she had a protest to lodge against the Ohio vote, in writing as required. "And," she said, "I do have a senator." The senator was California's Barbara Boxer, who said she joined in the protest because it was the only way to shed light on the voting irregularities in Ohio and the need for election reform nationwide.

Sen. Ted Kennedy praised Boxer for forcing the issue, saying that to treat the vote certification as a "meaningless ritual would be an insult to our democracy." But as noble as the Democrats' intentions might have been, it was hard to see how the protest itself was anything other than a "meaningless ritual."

The protest put a hold on the vote certification so that each house could retire to its respective chamber for debate and a vote on the issue. But Boxer -- or anyone else who thought the protest would lead to serious discussion of election reform -- must have been disappointed by the sorry spectacle that followed. There was no sense of history being made, no sense that anything was really happening at all. Although a few hundred people protested in the drizzle across the street from the Capitol, the visitor galleries in the Senate were mostly empty. Fewer than a dozen senators showed up for the debate, and only the ones who spoke -- among them, Hillary Rodham Clinton and, in his first floor speech, Barack Obama -- seemed to take it seriously. As Illinois Sen. Richard Durbin made an impassioned plea for a bipartisan effort to improve the electoral system, Dick Cheney and Sen. Rick Santorum sat slumped in a couple of chairs on the edge of the Senate floor, talking and laughing. They weren't listening. With solid majorities in both houses, they didn't have to.

And the Republicans weren't the only ones who seemed to give the protest short shrift. Minnesota Sen. Mark Dayton, a Democrat, took to the floor to criticize Boxer for facilitating the protest, saying she would undermine the country's confidence in its democracy if the protest were to succeed and the election were thrown to the House of Representatives. And while Senate Minority Leader Harry Reid ultimately spoke of the need for election reform, he spent much of the protest debate on the other side of the aisle, kibitzing with Santorum and a few other Republican senators.

When it came time for the roll call, Boxer was the only senator to vote for the protest; John Kerry, who had announced Wednesday that he wouldn't take part in any protest, conveniently found himself on a mission to Baghdad. In the House, 31 Democrats voted to support the objection. Eighty-eight House Democrats voted against it, and 80 of them didn't bother to vote at all. For their efforts, Rep. John Conyers and the others who pursued an investigation in Ohio got neither a serious debate over the voting irregularities nor a commitment from Republicans even to think about electoral reform.

The Democrats on the Senate Judiciary Committee were every bit as ineffective in securing commitments from Alberto Gonzales. New York Sen. Chuck Schumer asked Gonzales whether he would agree to urge Bush to consult with Democrats about potential Supreme Court nominees. Gonzales' response? He said he'd relay the request.

Gonzales' exchange with Schumer was one of several in which the nominee was either unable to or uninterested in engaging with the questions before him. Schumer praised Gonzales for working with him on judicial appointments, saying that because of their cooperation, Bush had appointed federal judges for New York who were conservative but not outside the mainstream. When Schumer asked why the administration hadn't been able to work cooperatively on nominations with Democrats elsewhere in the country, Gonzales said he'd wondered about that, too, then left it at that.

And time and again, when senators suggested that there might be some linkage between Gonzales' legal work and the abuses at Abu Ghraib, Gonzales seemed unable to understand why anyone might think there could be a connection. When asked whether he agreed with the narrow definition of "torture" set forth in a legal opinion he requested from the Department of Justice's Office of Legal Counsel, Gonzales said that by asking for the opinion to be written, "I did my job as counsel to the president." Pressed further by Vermont Sen. Patrick Leahy, Gonzales said that he didn't recall whether he agreed with the narrow definition at the time the opinion was presented to him, and that "ultimately, it was the responsibility of the Department of Justice" to interpret the law.

Other times, Gonzales seemed to be unprepared for questions he should have known were coming. When asked about memos he wrote to help Bush, then governor of Texas, weigh clemency requests from death row inmates, Gonzales was vague about why he had left out information that could have given Bush reason to think that death sentences should be commuted or at least delayed. Asked about a now legendary case in which the condemned man's lawyer slept through much of his trial -- a fact Gonzales didn't see fit to mention in his clemency memo -- the nominee said he couldn't remember any of the details of the case. And when Sen. Lindsey Graham asked Gonzales whether he agreed with a military lawyer's suggestion that White House policy on torture and the Geneva Convention put U.S. troops at risk, the nominee was caught completely flat-footed. He asked if the clock hadn't run out on Graham's questioning. He asked Graham to repeat the question. And then, when he still had nothing to say, he accepted Graham's offer to take some time to think about it and provide a response later.

Gonzales offered a few assurances here and there. He said he understands that he'll have an obligation to justice, and not just to the president, when he's serving as attorney general. He said he disapproves of torture, and that he is committed to following the rule of law. But without details -- and Gonzales wasn't providing any -- Democrats know that those promises don't mean much. If you don't say how you'd define torture -- and Gonzales didn't -- then it's easy to say that you oppose it, just as it's easy to say you'll follow the rule of law so long as you don't say what you think the law is.

None of this sat well with the Democrats on the committee, but they know there's nothing they can do about it. It takes a simple majority to confirm a cabinet appointee. The Republicans can provide that on their own, and some Democrats -- including Colorado Sen. Ken Salazar, who introduced Gonzales at the meeting -- are likely to cross over and join them.

So even if there's a direct line between Gonzales' legal work and the abuses of Abu Ghraib -- abuses so awful that Sen. Orrin Hatch suggested that photographs of them not be shown while Gonzales' children were in the hearing room -- the Democrats are just going to have to take it. The process wasn't pretty. Some Democrats pushed Gonzales hard for answers. Leahy pursued him aggressively on a number of issues, including his vetting, such as it was, of Bernard Kerik. Kennedy came at him again and again on torture and the Geneva Convention. And Graham, a Republican, questioned Gonzales sharply even though he said he intended to vote to confirm him.

But even the most aggressive questioners were left looking a little pathetic. At one point Thursday afternoon, Ted Kennedy was reduced to begging Judiciary Committee chairman Arlen Specter for all of 15 minutes to question Gonzales about issues like immigration and civil rights.

And after assuring Gonzales that his confirmation was in the bag, Joe Biden found himself groveling before the nominee, calling him the "real deal" -- remember when they said that about John Kerry? -- even as he pleaded with him to tell the truth about something. "We're looking for candor, old buddy," Biden told Gonzales Thursday morning. "We're looking for you, when we ask you a question, to give us an answer, which you haven't done yet. I love you, but you're not being very candid so far."