A "Dateline" film crew gets in the way as I make my way to a former surfing hot spot, where families line up for hygiene kits, and a hotel owner, who reminds me of Lenny Bruce, reclaims fishing boats. 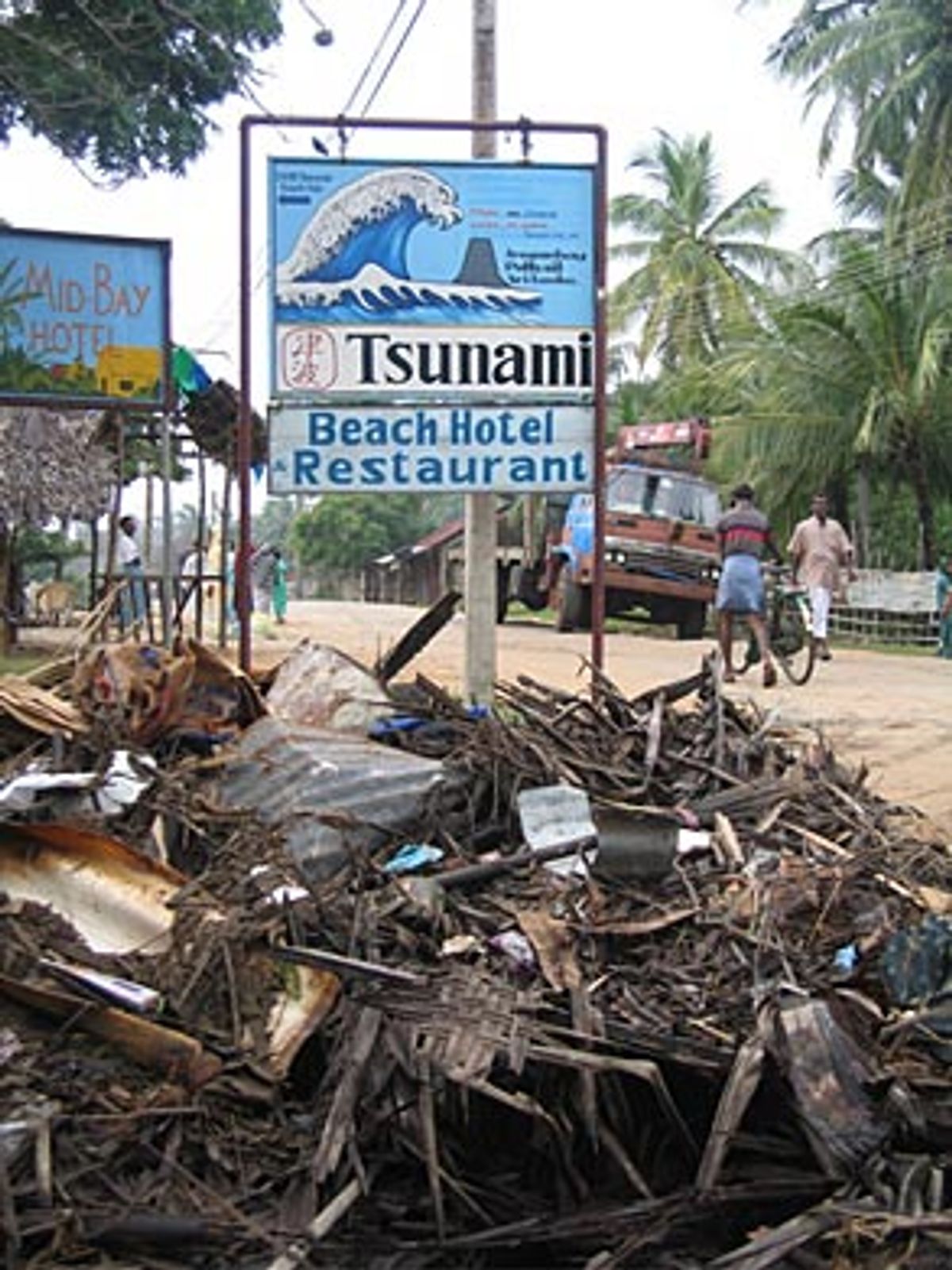 Jan. 11, 2005. Aboard the Black Hawk helicopter, his ears plugged against the roar of the rotors, a U.S. Marine in a flak jacket pencils me a note:

That's how long it will take us to reach the shores of Arugam Bay. It would be nine tortuous hours by car from Colombo, driving along the twisting southeast road that crosses the mountains and jungles of the island's interior.

Yesterday, along with my work as a communications director for the relief organization Mercy Corps, I imagined I would write about the tsunami supply depot at Sri Lanka's international airport. The process of getting the Black Hawk and the supplies we requested, and getting myself onboard, was a labyrinth that would have maddened Theseus. Two full weeks after the tsunami, the scene at the supply depot is still a scene out of "Catch-22." Trying to get tents, hygiene kits, foam mattresses, plastic sheeting or even bottles of water to the people who need them is something approaching comic opera.

But that's behind us, now. The Black Hawk lifted off at 1 o'clock this afternoon. We were supposed to bring 10 boxes of tarpaulins to Arugam Bay on Sri Lanka's southern coast, but we ended up taking half as many after an NBC "Dateline" crew wrangled its way onboard. Now we sit together in the cramped cargo bay, squeezed between the boxes of supplies.

Sri Lanka is still a beautiful country and the area between the coastlines was untouched by the disaster. We fly over gorgeous green hills, lakes and rivers, as the shadows of clouds move across white Buddhist temples and palm groves. Then the mountains flatten and the hills undulate toward the coastal area -- which appears, from above, like a stagnant and littered swamp.

Prior to the tsunami, Arugam Bay was considered one of the 10 best surf spots in the world; the British held their surfing championships here in 2003. Aside from a thriving tourism industry, the community included thousands of fishermen and their families. But the three waves of December's tsunami struck this region with apocalyptic force, killing an estimated 3,000 people, flattening the fishing villages, and turning the strand of beachside hotels and restaurants into a scene of Hiroshima-like ruin.

Five boxes of plastic sheeting seems a pathetic offering, but a team from Mercy Corps and the Sewalanka Foundation, one of the country's most important community development organizations, is waiting in the rain with flatbeds. Quick as a wink, the Black Hawk touches down and the supplies are unloaded. The "Dateline" crew gets a few manic shots -- barely leaving the chopper -- and the helicopter is off again. We watch it bank east, wondering when, or if, we will see it again.

Jim Jarvie, a high-spirited and compassionate Brit with a shaved head and King Tut goatee, is Mercy Corp's man in this area. His fields are forestry and conservation; he was living in Colombo, writing "The Natural Guide to Sri Lanka," when the tsunami struck. Somehow, he's ended up choreographing the complex dance between Mercy Corps and the regional NGOs, a task he handles with impressive élan.

We ride on the back of the tractor to a cement warehouse, where Jarvie introduces me to Harshanan, the energetic young team leader for Sewalanka. The boxes are unloaded and stacked with other supplies -- mainly "family hygiene kits," which, ironically, were delivered yesterday morning, entirely by accident. (The agency that delivered them had the audacity to call Jim and ask that they be reloaded on a helicopter and sent back; Jarvie recalls the moment with hilarity.)

The kits are fairly basic, containing shampoo, soap, toothbrushes and toothpaste, shaving razors and sanitary napkins. We carry 270 kits in all. For half an hour, the tractor churns along a mud-holed track, passing shallow lakes created by the tsunami. Pied kingfishers perch on tree branches; goats poke through trash; a mongoose skitters into a brush. A lone computer monitor sits on a patch of grass, as if someone has set up an office in the wilderness.

After the supplies are stored, Jarvie takes me on a tour of the beach. The devastation is complete. Everyone we see has lost loved ones and friends, and even now, two weeks later, they stand in the rubble of their homes and businesses as if trying to decide which way to turn.

"Some 1,500 families lived here," Jarvie says. "Everyone was affected. There are about 3,000 dead. Surprisingly few injuries, though. One of my friends here put it this way: 'If you were caught, you drowned.'

"The problem now is psychological," he continues. "Just today, people are starting to talk; and they're starting to cry. Their stoicism is collapsing. A lot of them lost everything. One woman tried to hang herself yesterday; two men have gone mad. We're at the point now where the shock is wearing off. These people are just realizing what hit them."

As we walk, numerous people approach Jarvie. They speak quietly, sometimes showing pictures of lost friends or family, sometimes asking for money. Jarvie treats each of them with extraordinary respect, explaining that while Mercy Corps cannot help individuals, everything is being done to help supply essentials and rebuild the community. "Bear with us," he says. "Arugam will come back." He never fails to ask how the victim's family has fared, listening intently before expressing his sympathy.

"There's nothing I can do for these people on a one-to-one basis," Jarvie explains, "except listen to them. And many of them, I've learned, need very much to be heard."

I find myself unprepared for the emotional impact of walking through the leveled fishing village and obliterated tourist strips. The roads have disintegrated into ragged ribbons and the bridges are shattered as if by a giant hammer. Toyota vans and pickup trucks lie smashed against trees or half-buried in sand. Bodies wash ashore nearly every day; scores are feared to lie beneath the mucky silt. Entire houses, with cement foundations and masonry walls, are literally torn in half. The body of a German resident -- a friend of Jarvie's -- was torn from his hotel office and carried 3 kilometers inland; his wife, who had been on the structure's second floor, survived.

Some people are wandering around with vacant stares, while others have already begun the process of rebuilding. "The first contribution Mercy Corps received," says Jarvie, "was 10 shovels and a wheelbarrow  from the Arugam Bay Surf Club." We walk by its headquarters. In contrast to the rubble-strewn yards around it, the clubhouse grounds seem eerily well-groomed.

At the refugee camp of Atimule, 107 families wait for supplies. Distribution is polite and orderly, the families taking numbers and receiving their kits before moving away with a word of thanks. I'm taken aback by the graciousness of the process. One man approaches Harshanan with a shy request; he'd like to know if he might have the cardboard box the kits arrived in. This causes brief confusion; there's no real policy for this.

Watching the distribution, I ask Jarvie a convoluted question: What can Sewalanka actually do better, now that Mercy Corps is here?

"On their own, they'd have goods from individual donors," Jim replies, "but not these immediate relief supplies, like the hygiene kits and tarpaulins from USAID. But you might also ask, 'What can Mercy Corps do better, working with Sewalanka?' The answer is, almost everything. They're our eyes, ears, and often our legs on the ground."

Jim and I walk through the ruins of Ullai, the fishing village annihilated by the waves. We sink to our ankles in soft mud. Sewing machines and broken wall clocks emerge from the silt like fossils from a tar pit. I remove my boots and gingerly ford a stream, terrified of stepping on a human limb. Luckily, such encounters have become rare.

For our final errand of the day, I join Jarvie at a meeting with a local businessman named André Tissera. His hotel, the Hideaway, is nearly intact, one of the least damaged structures in Arugam Bay. Even the bookcases are untouched, the volumes stacked with surreal formality behind leaded glass doors.

Tissera is in his late 40s, a wiry character with graying hair and fast-paced, ironic English. He describes his surname as an acronym -- "T for Thailand, I for Italy, S for Spain, S for Sweden, E for England, R for Russia, and A for America." He reminds me of a young, somewhat darker Lenny Bruce. He confers with Jarvie about the most essential priority -- cleaning up the village -- and shares his exasperation with some of the relief efforts.

"We received an entire shipment of miniskirts," he moans, "and ties. Ties! And not a small number! Someone should tell these people to stick their old clothes in an attic, instead of unloading them on us." But the lion's share of his wrath is bestowed upon a humane society based in Colombo. Tissera says he could hardly contain himself when, opening up one of its relief packages, he found a shipment of dog food.

Mercy Corps will soon begin a "Cash for Work" program in this area, paying 100 local people for 21 days of full-time cleanup. Jim and André discuss the situation, trying to determine which 100 of the thousands of eligible workers they'll hire. The hierarchy, both agree, should start with those who have lost their entire houses. The next layer, Tissera suggests, should favor people "who will come back."

Not everyone will. Earlier, I'd spoken with a fisherman who had lost his son; his home was also destroyed. When I asked when he'd fish again, the man shook his head in a panic and clapped his chest in the universal gesture of fear.

"Never," he said. "I will open hotel, or make other business. I won't ever go into the sea again."

Tissera, in contrast, is determined to demonstrate that people can reclaim their traditional lives and vocations. Just 36 hours after the tsunami, to the slack-jawed astonishment of his neighbors, he piloted one of the only surviving boats into the lagoon. He has since made a project of rounding up vessels scattered by the killer wave and repairing their damage. Tissera reckons that a third of them can be saved. (It's estimated that 80 percent of Sri Lanka's entire fishing fleet was destroyed.) His motive is simple: If the people of Arugam Bay cannot overcome their fear of the ocean, their community will never recover.

When I ask if there's anything left to catch -- a question that not even the marine experts have yet answered -- Tissera replies with absolute confidence.

"The fishing should be brilliant," he says. "Nobody's been out for 10 days."

For information about how you can help the victims of the tsunami, click here.