Ethan Hawke and Maria Bello may slay you in this pulpy thriller remake, but the film itself is DOA. 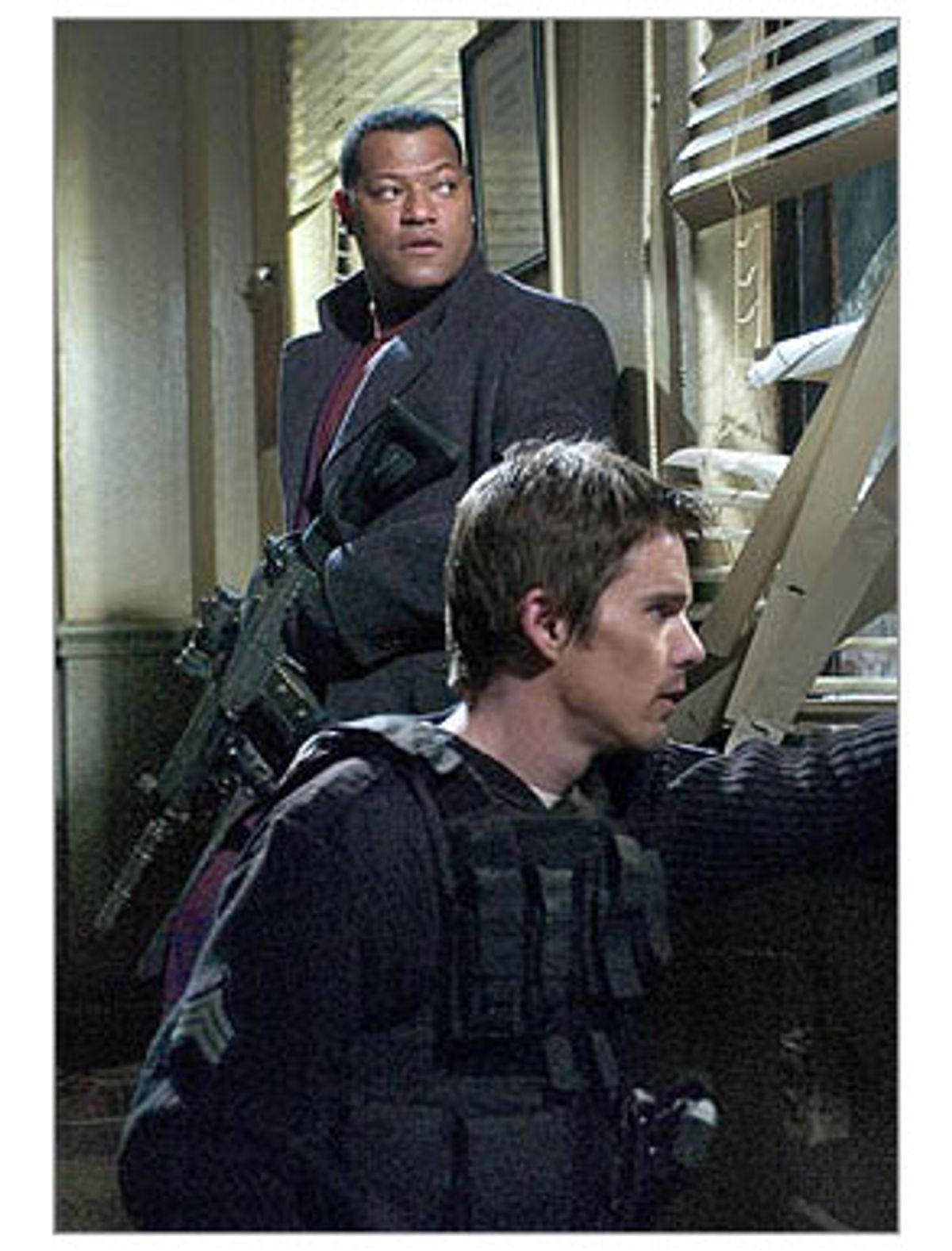 Although dozens of critics would eagerly point to the overflow of bad contemporary movies as evidence of the death of cinema, the real question is, why can't movies be worse? Or, more specifically, why can't anyone make good pulp anymore?

Jean-François Richet's remake of the 1976 el-cheapo John Carpenter thriller "Assault on Precinct 13" has moments of potential: It's set on New Year's Eve, when even the most wretched among us are susceptible to bleary-eyed sentimentality, the promise of new beginnings, and dialogue along the lines of "The Greeks called it eros and thanatos: sex and death" (uttered by a sexy thug played by Laurence Fishburne, no less). The picture is set in a rundown, soon-to-be-shuttered police precinct on the outskirts of Detroit, but it may as well be in the Yukon: The old brick building, nestled against a snowy forest, looks like part of a model-train setup, and a blizzard happens to be raging, too. The little figures inside that police headquarters -- some innocent, some not so innocent -- are all united in the desire to survive, seeing as they're under siege by baddies outside armed with grenades and automatic weapons. There's an aura of pulpy coziness around "Assault on Precinct 13" that's seductively appealing; in its best moments, it has the charm of a glitter-dusted Christmas card made lovingly by prison inmates.

But there's no killer instinct behind "Assault on Precinct 13": In fact, there's no instinct at all -- a great deal of thought may have gone into the making of "Assault on Precinct 13," but its tone and its rhythms are consistently out of whack. Richet, working from a screenplay by James DeMonaco, has no sense of the difference between being direct and bludgeoning. The movie's pulse beats irregularly, bumping and thumping in all the wrong places. Moments that should have been sustained are clipped too short, and vice versa. Characters we're just getting to know (and like) meet with cruel and sudden ends -- they're popped off with barely a blink of the shutter, rendered immediately inconsequential, as if Richet and DeMonaco just didn't know what else to do with them.

All of that's a shame, because some of the performers, at least, seem to understand what the tone of the material should be. Ethan Hawke plays Jake Roenick, a former undercover cop who's riven with guilt for a bad decision he made, one that caused the death of two of his colleagues. He's now a sergeant at ramshackle Precinct 13, although that precinct is about to be shut down -- this New Year's Eve is its last hurrah, and it's already beginning to look like something out of a ghost town.

But listen -- what's that we hear? Not the dancing and prancing of each little hoof, but the whirring of a prison bus careering along the icy road, its driver nearly blinded by the urgently falling snow. The bus is ferrying several evildoers from the center of Detroit to a far-off high-security detention center, but the weather is just too bad: The driver has to pull over at Precinct 13, where he begs Sgt. Roenick to let his prisoners spend the night.

But someone -- who could it be? -- is particularly interested in one of those prisoners, notorious crime lord and cop killer Marion Bishop (Fishburne). In scary hoods and padded vests, those big, bad nasties circle Precinct 13 and begin rattling its doors and blowing out its windows. Roenick and his visiting prisoners (they also include John Leguizamo as a psychotic junkie and Ja Rule as a small-time hustler), as well as a merry band of misfits, huddle inside. Among the refugees are the precinct's hottie receptionist, played by Drea de Matteo; a cheerfully crusty police veteran (Brian Dennehy, a sometimes fine actor who is also, unfortunately, the originator of the patented cheerfully crusty dial-a-performance); and Maria Bello, as Roenick's shrink, who's on her way to a New Year's Eve party but who must return to the precinct owing to the bad weather -- she shows up in a sparkly, strappy dress and Ugg boots, which she promptly trades for clickety-clackety golden sandals, as one usually does when entering a decrepit precinct building.

Carpenter's original "Assault on Precinct 13" was inspired by Howard Hawks' superb and deeply touching western-as-neighborhood "Rio Bravo," and even in this exceedingly pale imitation, you can see sparks of Hawks' spirit here and there, particularly in the way the performers interact: Unlikely alliances are formed; loyalties shift and reassert themselves, often uncomfortably. The crime boss and the sexy secretary find themselves strangely attracted to each other in the midst of all the violence; the shrink turns out to be far less in control of her emotions than her troubled patient is.

Hawke is much better here than the material warrants: He speaks every line, even the unconscionably stupid ones, as if it means something, and now that he's getting older we can see that his snaggle-toothed vulnerability, which could sometimes seem like an affectation when he was younger, rests deep within his bones: It informs his performance here, even in the moments when silliness and useless brutality clump around him. And Bello, who has always been such a likable actress that only since "The Cooler" has it become obvious just how good she is, gives off a radiant, prickly warmth here -- she's untainted by the movie's bumbling ill humor.

There's some good gore in "Assault on Precinct 13" -- one of the thugs is dispatched via the old icicle-through-the-eyeball routine -- but for the most part, even when the movie is at its noisiest and most violent, it feels curiously inert, as if it were thinking too much instead of allowing itself to ride its wilder impulses. And pulp needs a pulse -- without one, it's DOA. No matter how hard some of its actors work to resuscitate it, "Assault on Precinct 13" is as lifeless as a corpse on a slab. You could prick it with a darning needle and you wouldn't be able to raise a twitch.