A proud day in Iraq

At crowded polling places in Baghdad, excited citizens explain why they voted and how -- for one day, anyway -- hope suffused their country. 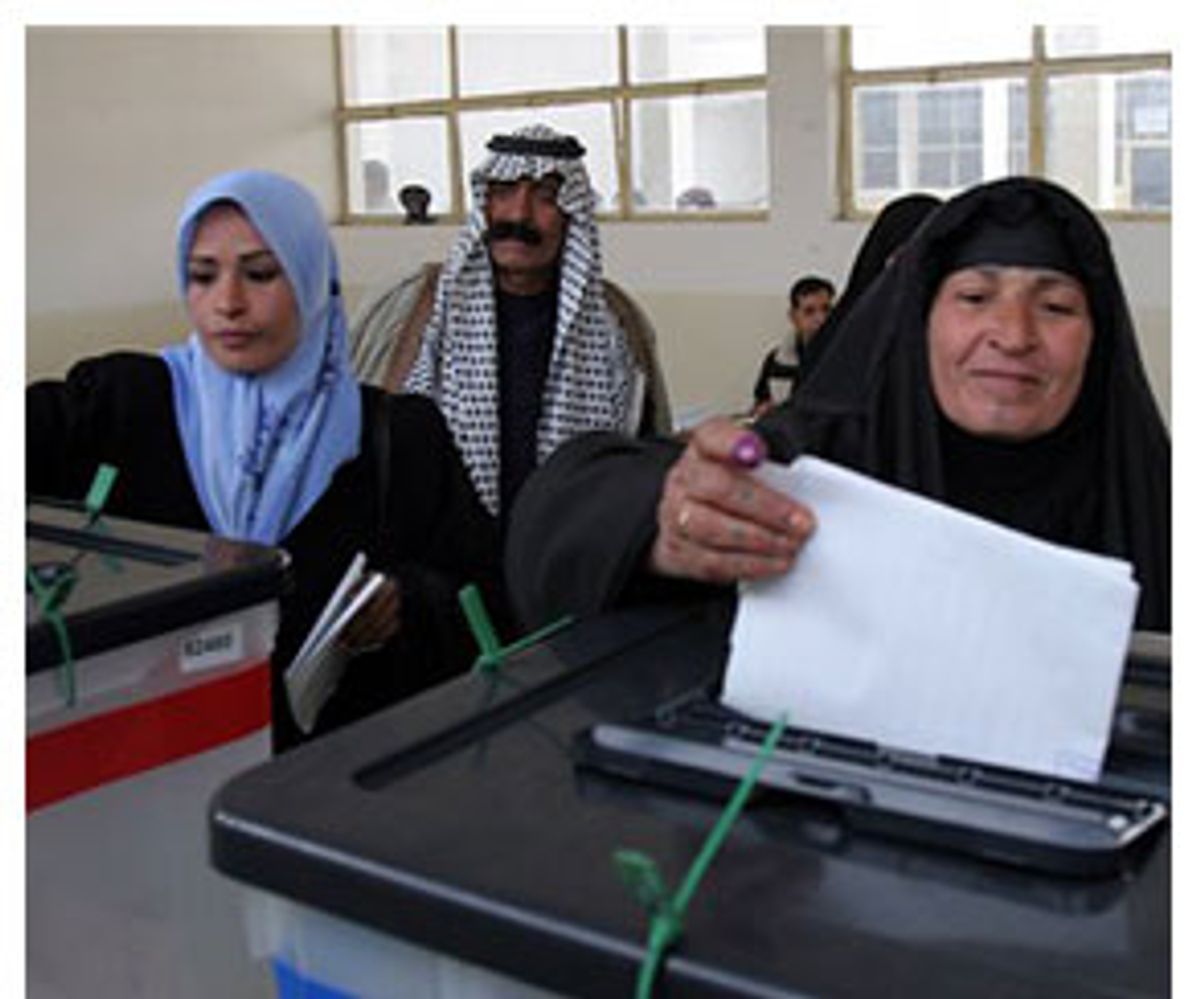 Despite vows from insurgents to wash the streets of Baghdad with the blood of voters, and despite the poor track record of coalition forces to protect Iraqis in this battered country, the Iraqi people made a powerful statement Sunday. In cities across the country, voter turnout exceeded even the most optimistic predictions, as millions of Iraqis rejected the violence and cynicism born of a botched occupation and a cruel insurgency. Driven by the country's Shiite and Kurdish communities -- accounting for 80 percent of the population -- they flooded the polls with near glee, showing their resilience and optimism after nearly two years of shattering disappointments and decades of oppression and war.

One Shiite voter, holding the hand of his 5-year-old son, told of his desire to show his son a democracy he had never before seen himself. "I want my son to see this," he said proudly. Like any other young boy, though, his son was impressed less by the arrival of a pluralistic society than by a tiny plastic flag that said: "Vote for Iraq."

The presence of children at the polls was an immediate indication that people were not frightened away by the threat of insurgent attacks. Waving ink-stained fingers -- proof that they had voted and a safeguard against their voting more than once -- Iraqis openly welcomed the media and sounded eager to explain why they were there. "The Iraqi people have never had a chance to vote," said one older man. "This vote is what Iraq needs to fix itself."

At the break of dawn Sunday, chilly and overcast Baghdad was a tense city under martial law. Rather than the sounds of 6 million people living, working and driving, an ominous silence pervaded the city's dusty brick canyons. The drone of a U.S. Predator reconnaissance plane gave way to the unmistakable sound of fighter jets speeding across the sky. Helicopters circled the city in preparation for any fight. By mid-morning, assorted mortar fire and blasts could be heard throughout Baghdad. Local news reports told of scattered violence in some key cities: a bomb in Mosul, blasts in Baquba, and mortar rounds hitting a few homes near polling stations in Baghdad.

It's been a year since it was smart for a Westerner to walk around Baghdad. Even a trip of 100 meters usually requires drivers and translators. But with many Iraqi staff at home, and our credentials to drive around town rendered useless by the Iraqi police, small bands of reporters and translators headed out on foot to see the voting.

Despite the thump of mortar rounds in the distance, people formed long and orderly lines at polling stations. Iraqis and Westerners working here have long grown accustomed to continuous booms and bangs, and the Iraqis, many of them Shiite and exercising the first franchise in their lives, were not about to miss their chance to vote.

"We are not afraid," Muhanned, a young Shiite who works as a translator for a major Western news agency, told me just moments after he voted for the first time in his life. "We Iraqis are a proud people, and today we showed you why I have always been proud to be Iraqi, even under Saddam," he added.

At a late-afternoon press conference, the Iraqi government was bragging that the election would see a 72 percent turnout. If true, and all indications are it is, that will mean that almost everyone who was registered and not living in an insurgent-controlled town like Samarra came out to vote. Anywhere close to 72 percent would be an amazing turnout in an American election; in Iraq, it beat the most optimistic prediction by about 15 points.

The turnout was low in war zones like Fallujah and Baquba, but it's hard to cast judgment on those who decided not to vote there. American soldiers in armored vehicles regularly face brazen attacks and it's impossible to ask ordinary Iraqis to assume even higher risks. Still, many people rejected the elections for their own reasons, muttering about jihad, Jews, and the pernicious influence of Americans and Iranians.

"When the Americans came, we loved them," one non-voting Sunni voter in his mid-20s told me. "But we have no electricity, no jobs and all violence. Why should we vote? America wants to stay because it wants our oil."

This negative outlook and fear did suppress the Sunni vote to nearly nonexistent levels in Sunni cities like Ramadi, where only 300 people out of 400,000 voted, according to one embedded journalist. But in Baghdad's middle-class Sunni neighborhoods of Yarmouk and Monsour, where many former Baathist officials and soldiers make their home, the huge turnout defied expectation. "It was like Saddam was running," said Hasim, an Iraqi from Yarmouk, who had warned me the previous day that none of his neighbors would vote. "Men and women, everyone, was lined up to vote. I was wrong, so wrong."

As night fell, and the rumors of widespread bloodshed never materialized, I sought out my friend Osama, who just days before had predicted civil war between the Sunnis and Shiites. "They were stupid. They should have voted," he said of the insurgents and the anti-American contingents, with whom his sympathy sometimes lies.

"They should have made a deal, because now they won't be in this government," he said. "Now all those questions -- Is this a legitimate government? Do the Americans control [interim Prime Minister Ayad] Allawi? -- are over. No one will care anymore. If the 'muj' [mujahedin] attack Iraqis now, they are attacking the Iraqi people's government, not the Americans. And then people will unite to crush them. Before it was the Americans' problem. But now it is ours."

At the same time, he still predicted civil war. "The Iraqi people together will fight the Sunni who reject this new government," he said. "Wait until you see Iraq in 10 years, it will look like Beirut -- Beirut today, not the Beirut at war."

While Iraq did face violence Sunday, the majority of voters did not fall prey to it. The security measures, befuddling and draconian as they were, decidedly carried the day, and militant leader Abu Musab al-Zarqawi did not. The failure of Zarqawi to disrupt the election could cast a new light on the insurgency, which at times has been portrayed in the media, by reporters like myself, as an omnipotent force.

In particular, the removal of all cars from the streets was a clear blow to the insurgents, as it prevented suicide bombers from moving about the city. The preferred weapons of Zarqawi -- car bombs and kidnappings -- were also contained. And while many thousands of Sunni Iraqis remain willing to fight coalition and Iraqi security forces, launch mortars, and set roadside bombs, many said Sunday they are unwilling to blow themselves up amid their own people.

Still, it's far too early to tell if the election was a victory for democracy. The real threat of civil war remains, particularly if large numbers of Sunnis do not participate in the nonviolent process begun Sunday. It's also likely that American soldiers will continue to die as long as they remain on the streets of Iraq. These problems will not go away no matter how many Shiites and Kurds vote.

But for a single day, even if the election was not a complete victory for democracy, it was a singular victory for security and a moral one for self-determination.