In the most gorgeously conceived AND ultraviolent video game in history, you can open fire on passing cars with a bazooka while exploring universal archetypes! 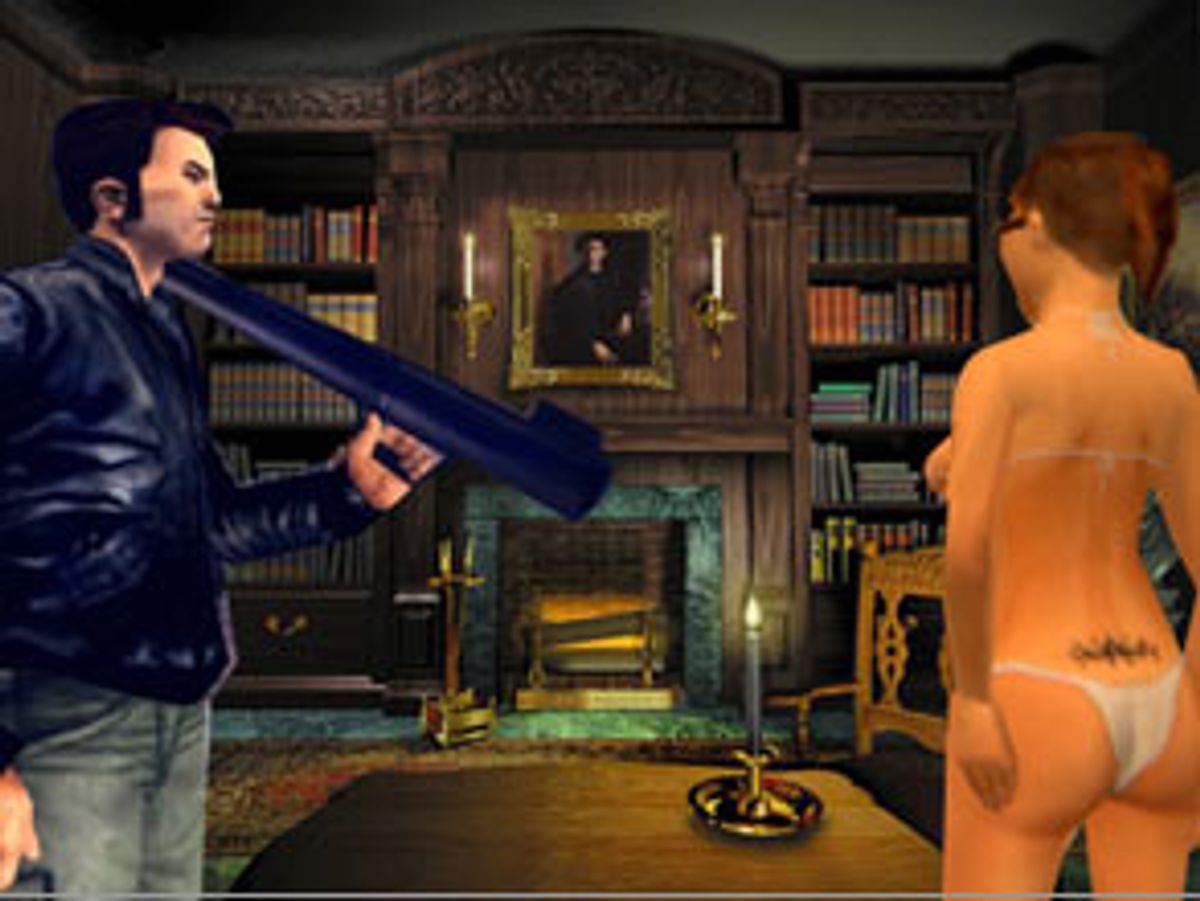 Objective: Climb the ranks as a gangland sociopath by ruthlessly solving a series of intricate puzzles dispersed throughout the fantasy worlds of "Myst." But that's just the game's narrative dimension. Half the fun, of course, is exploration for its own sake, so if for some reason you're losing interest in, say, valves and knobs, just take a break from the storyline and wander. The realms of "Myst" aren't mere pixilated backdrops, but vivid and highly interactive landscapes. If you simply dash from screen to screen, you'll miss out on many of the game's treasures, not to mention some nicely situated sniping perches.

Start: The game begins simply enough: You find yourself on an island. You don't know how you arrived in this magical place -- you've only been out of the joint three hours, and you hope to fuck you're not in Jamaica because you know way too many Rasta men with scores to settle. But unraveling the astonishing truth will take all your wits. Then, it will take the wits of smarter friends, and then it will take the wits of a shut-in who wrote a walk-through.

How did this game come about?

With the release of "Revelation," the fourth installment of "Myst," not to mention several derivative novels, the creative team at Cyan worried that the title had played itself out. For a jump-start, the company turned to collaborations with long-standing video game icons. Those early partnerships, however, failed to produce the desired synergy. In other words, there's a good reason you haven't played "Ms. Pac-Myst."

But the "Grand Theft Auto" and "Myst" series seem so aesthetically opposed. How did the programmers manage to integrate them?

Obviously, compromises had to be made. For example, if you've played "Myst" before, you know that go-go clubs are scarce and that there's no Little Havana, per se. Similarly, in "Grand Theft Auto," the only reason you might find yourself in a library is because you're hiding from the SWAT helicopter. Balance was key: Just the right amount of urban development -- followed by just the right amount of urban decay -- was needed to create a picturesque dreamscape that could also credibly be swimming in guns.

"Myst" is pretty much uninhabited, while "GTA" is all about the characters. How did they get around that?

To be honest, there wasn't any coherent, plausible way to populate "Myst" within the existing mythos. Instead, the game's creators took a bold meta approach. All the inhabitants of "Grand Theft Auto: Myst" are the virtual presences of players who attempted a previous version of "Myst" but gave up forever after 45 enchanting minutes. Without a directing intelligence to guide them, these "afterimages" eventually coalesced into a crude, benighted society -- prostitutes, drug lords, tourists.

For those of you unfamiliar with the name, Atrus is the architect of all the "Myst" realms. He's wise, avuncular, and needs your help -- a lot, and for free. The folks at Cyan wanted to keep him that way. Rockstar Games, which puts out the "GTA" series, wanted to go in a different direction with "Myst's" most important character. In the end, an agreement was reached: Atrus -- still wise, still avuncular -- would be recast as a harmless rare-book dealer who occasionally troubled players with small errands: picking up 700 kilos of rare books at an abandoned quarry, connecting a rare book to the ignition of a Russian mafia lieutenant's car, and so on. In addition, Atrus' ether addiction could be toggled on and off.

There's something so pristine and nonthreatening about "Myst." I'm worried that it will resensitize me to violence.

I know what you mean. There's that one-of-a-kind "Grand Theft Auto" moment when you've beaten a hooker senseless with a golf club, dragged a tourist from his station wagon, and sped off down a crowded sidewalk, only to realize your sole regret is that you jacked a car with such crummy acceleration. Meanwhile, one of "Myst's" strengths is the way it attunes you to your environment -- not the state of mind for a proper rampage. If you don't have preexisting grudges you can channel into mayhem, just let all the synthesizer music seep into the more reptilian parts of your brain for a few hours. Trust me, you'll be ready for a drive-by.

How about some hints?

Sorry, I can't just give the game away. All right, here's one. When you find the corpse of Fabiano the Snitch in the crystal forest, jot down in your journal the bullet holes in his chest, abdomen and groin. You'll be pleasantly surprised to find that they form constellations you'll need to know later on.

I've always been a fan of nonviolent games. I just have to say that I'm really disappointed by all this.

If that's the case, I highly recommend you also avoid the next version of "Tetris." You'll find the pimps distracting.