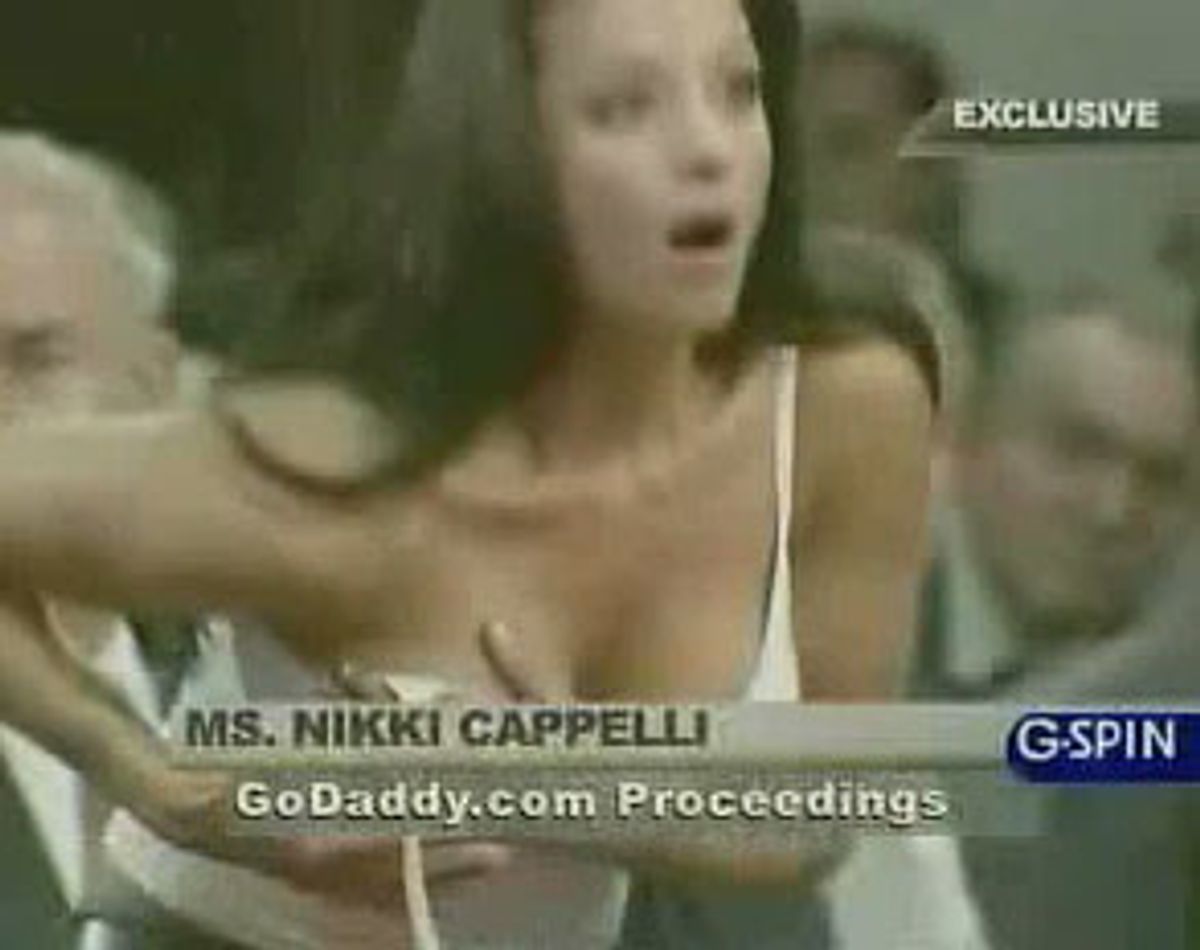 $80,000 per second. That's how much Fox charged America's richest companies to turn last night's Super Bowl into a small masterpiece of waste and insipid mediocrity -- one of the ad industry's worst performances ever.

The annual buzz surrounding each year's slate of new Super Bowl ads has always been one of America's most loathsome media rituals. This year was no exception.

The bummer always begins when those "We just can't wait to see what those nutty ad guys will come up with this year!" stories start trickling into the news and sports sections sometime early in the week before the game. This is usually followed by the annual viruslike outbreak of that apparently incurable media cliché -- "I only watch the Super Bowl for the commercials" -- that strikes at least 50 pundits and on-air celebrities every year. Lastly, the term "Super Bowl of Commercials" is mentioned at least 5,000 times the last 48 hours of pre-game broadcasts, in each case delivered as if it is being coined for the first time.

We had all of that this year, but advances in communications technology also allowed us to experience new and virulent strains of the usual clichés. A columnist named Rainbow Rowell from the Omaha World-Herald announced that he was going to record the Super Bowl for the first time, but only "because of TiVo -- because it lets you watch the commercials without sitting through any of the game itself."

This year also saw a variation of the "controversial ad unjustly yanked at last minute by buck-passing network pussies" story, which has become a sort of Bowl week staple. Last year, of course, CBS pulled an anti-George Bush ad commissioned by MoveOn.org, as well as an animal-rights ad produced by PETA, citing a network policy against issue-advocacy ads.

This year, the censorship theme was not naked political cowardice, but prudishness. Fox killed two ads. One was an Anheuser-Busch spot that depicts last year's "wardrobe malfunction" incident as being the fault of a beer-loving stadium stagehand who accidentally breaks Janet Jackson's nipple-ring bustier -- by using it to open his Budweiser. The spot, which has been described as "almost" funny, was deemed too controversial and killed.

The other ad Fox yanked was an Airborne cold remedy spot that apparently revealed, for a split second, the naked buttocks of Mickey Rooney. Its cancellation might yet prove to be the least-protested act of censorship in TV history.

As for the ads that did make it on air, it was clear right from the start that Madison Avenue was determined to play things very close to the vest this year, in the wake of last year's Super Bowl debacle -- known in the business as the "Crude Bowl." Last year's ad crop, which featured a farting horse and a testicle-chomping dog, was roundly denounced as being unusually tasteless and unfunny even by Madison Avenue standards. Continuing fallout from the Janet Jackson incident also doubtless affected agency thinking this time around. The result was a collection of the most inane, soft-edged, appallingly saccharine commercials the Big Game has ever seen.

No matter how awful the ad crop might be as a whole, every Super Bowl always has one big winner, one spot that sticks in the public's mind.

It might be an impressive piece of darkly obscure cinematic gibberish (Ridley Scott's Orwellian Apple ad in 1984), a memorable celebrity skit (Bird and Jordan's 1993 game of horse; Visa's "Six Degrees of Kevin Bacon" spot in 2002) or the punishing repetition of some unforgettably annoying slogan (Whasssuuuuup!).

Even in 2003, widely considered one of the weakest Super Bowl ad crops ever, we were at least given the "Terry Tate, linebacker" spots, which were genuinely funny for at least 10 seconds.

Not this year. The 2005 Super Bowl crop was so lame, it would have been brightened by a Gilbert Gottfried anti-drug spot shot in an AIDS hospice.

The dominant themes were obnoxious talking animals, subdued performances by B-list celebrities, and trite vehicle ads featuring very little zooming and lots of mute, ponderous stills of parked cars. The T&A factor was scaled down to CBN levels, and the only visually innovative ad (for DirecTV) revolved around a strikingly depressing tale of a man who travels through time from beautiful youth to infirm old age, ending right where he began -- in front of a television.

The manly-truck-ad genre, normally good for at least one entertainingly outrageous variation of the pickup-tows-aircraft-carrier-up-Kilimanjaro theme, was a flop from the start. GMC (to its credit) played it safe, hyping its Sierra by covering it completely with mud and driving it down a hill. Boilerplate truck stuff, a solid B-minus.

Ford, however, went the comedy route and fell on its face. The comic plot involved a yuppie family in a minivan who shudder and lock their doors as they're passed on the highway by a scary biker gang. The scary biker gang then pull in to a roadside diner and hesitates when they sees a parking lot full of menacing black F-150 pickups. Frightened by the manly trucks, the bikers decide to leave. "The salad bar is better down the road," one of them says.

This is fine so far -- standard car-company humor -- but the tag line is the killer. "Ford," roars the narrator. "We don't just make our trucks tough, we make you tough." At the Super Bowl party where I was watching the game, the room exploded in laughter at this line, which sounded like an unintentional parody of macho car-commercial bullshit. It was the only ad all night that got a big laugh.

The digitally rendered talking animal factor, always high wherever large numbers of beer commercials are involved, was positively off the charts. The Emerald Nuts company, whose previous play-on-words-themed campaign was sort of interesting ("Evil Navigators love Emerald Nuts!"), opted in the Super Bowl to employ creepy digitized versions of a unicorn, Santa Claus and the Easter Bunny.

Dad wants to eat all his Emerald Nuts himself, so he tells daughter that if she eats an Emerald Nut, "Unicorns will vanish forever." Enter creepy animated unicorn, who says, "That's not true!" This turns out to be the punch line. Cost of joke: $2.4 million.

Budweiser, which owes so much to the talking animal mascot, tried two creature spots. In one, an advancing mass of exotic wild animals (elephants, giraffes, etc.) breaks down a barn door to beg for the Bud Clydesdales' beer-pulling job. The ad makes some sort of joke, but you won't notice it because you'll be too busy wondering how you feel about a giant American corporation fantasizing about using endangered species as pack animals.

The other Bud creature is a talking cockatoo. The cockatoo has a Hispanic accent and is shown walking aggressively on a bartop, randomly bitching at some poor beer-drinking customer. The bird's money line is either "Adios, muchacho!" or "You don't want to go there, Buckwheat!"; it was hard to tell which. Clearly they're still working out the kinks with this bird thing.

Two different companies -- Verizon Wireless and an employment site called CareerBuilder.com -- ran spots starring chimpanzees (real ones, not digitized ones). The Verizon ad, which showed chimps talking into bananas as though they were cellphones, may have hit a little too close to home for the businessman viewer.

The CareerBuilder.com spots made more proper use of chimps, putting scads of them in office scenes and just letting them wreck shit and pester the office humans. If any of the Bowl ads win critical acclaim, it will probably be these.

In my opinion, only one ad in the group even came close to living up to the lofty standards of excellence we have come to expect of Madison Avenue. That was another Web site ad, for a domain-name company called GoDaddy.com. In this ad, a girl with huge breasts, dressed in a tight T-shirt with "GoDaddy.com" in stretched lettering, is testifying before some kind of congressional committee. Under heated questioning -- and repeated close-ups -- her top keeps sliding down, and she keeps giggling like an idiot. And that's the whole ad; 30 seconds of heaving honkers, ending in one punch line: "I didn't mean to upset the committee!" Now that's advertising!

That was it, the sole highlight. The lineup was so dull that one actually longed for a melodramatic Army ad or a brain-on-drugs public service message. But even here, in the area of insidious hidden messages, the crop was very weak. There was one clear dual-meaning ad, by Subway. In it, a policeman approaches a parked car with fogged windows, raps his nightstick on the car door, and discovers, in the car's front seat, two teenage boys chomping Subway hoagies. The cop in the ad, incidentally, looks like something out of the Village People. I'm guessing that this is an homage to some cult gay porn classic, but it's hard to say for sure. At least it wasn't Jared in the cop suit; that would have been the stuff of nightmares.

In all likelihood the ad industry will wait until next year to really crank things up; we'll be two years removed from Janet Jackson by then, and once again hungry for fart jokes and celebrity degradation. But until they get back on track, the Super Bowl will only ever be what it was this year -- a hell of a football contest. Gosh, what a shame, when the only thing to watch is the game.

Matt Taibbi is a columnist for the New York Press.