The Patriots are their spectacularly unspectacular selves as they wear down the Eagles to win their third Super Bowl title in four years. 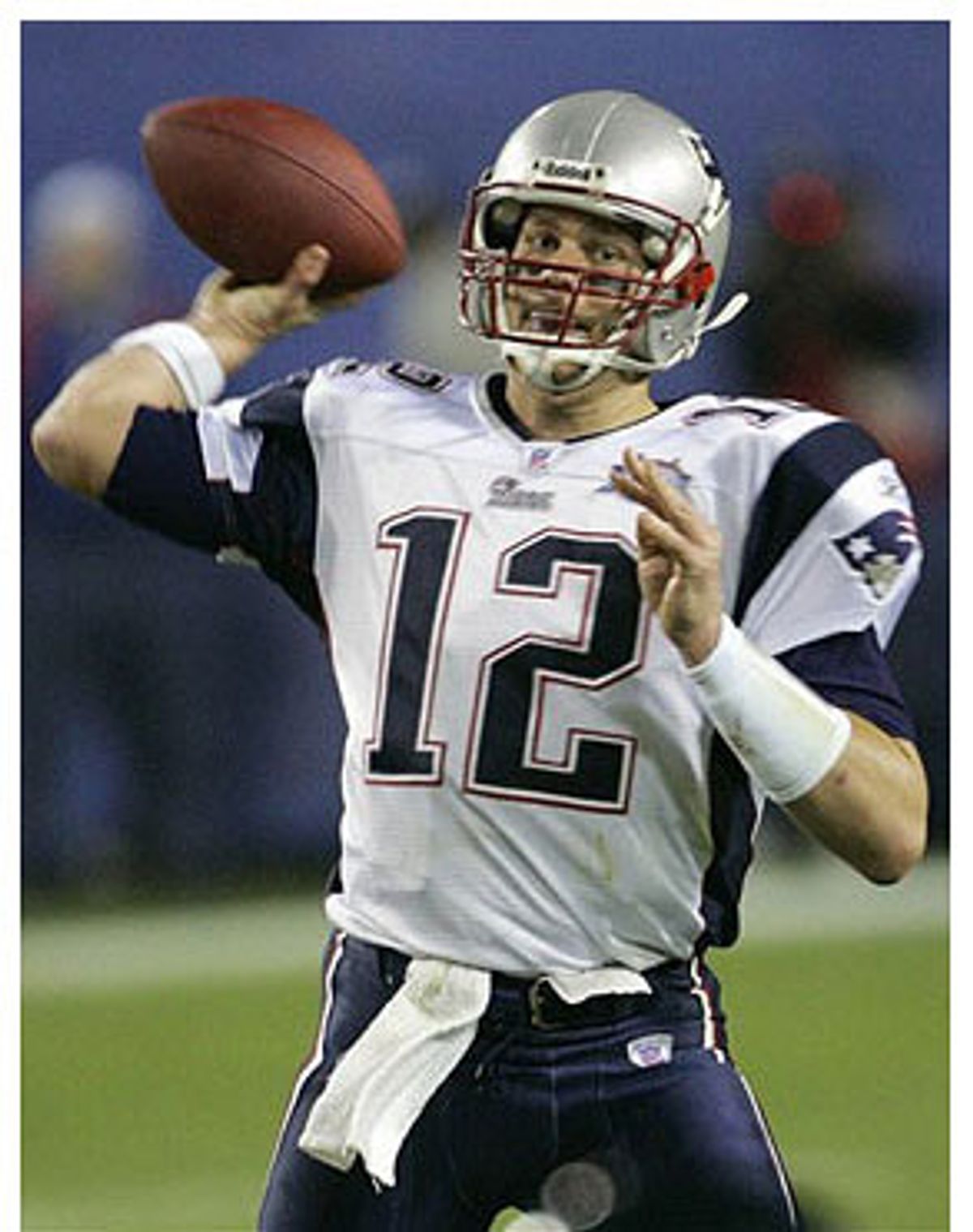 They're going to have to work overtime at NFL Films to make this one look like a classic. They'll have to use every play in the book, every kettle drum and French horn, every slow-motion montage, and still it probably won't work. But that's the thing about the New England Patriots: They don't win 'em pretty. They just win 'em. And win 'em. And win 'em again.

Sunday night the Patriots won their third Super Bowl in four years, taking control of a tense but sloppy game in the second half and outlasting the Philadelphia Eagles 24-21 at Alltel Stadium in Jacksonville, Fla. Deion Branch was the game's Most Valuable Player, tying a Super Bowl record by catching 11 passes for 133 yards.

Branch overshadowed Terrell Owens, though the Eagles' star was almost as good on his famously injured right ankle, catching nine passes for 122 yards and proving to be Philadelphia's only consistently effective weapon.

The Eagles, given no chance by most observers, had their chances to take over the game early and didn't do it. The Patriots aren't inhuman. It's possible to let them off the hook in the first half and still beat them. Actually, that's just a theory. New England has won 32 of its last 34 games. Nobody has let them get off the deck and lived to tell about it. The Eagles didn't.

New England went ahead for good when Corey Dillon pounded in from the 2-yard line early in the fourth quarter for a 21-14 lead. Dillon ran for 75 hard yards, a third of them on one play. Seven Patriots caught a pass, including linebacker Mike Vrabel, who lined up as a tight end and made an athletic, juggling catch for his second touchdown in as many Super Bowls.

The Patriots defense more or less contained multi-purpose back Brian Westbrook, sacked quarterback Donovan McNabb four times and didn't let him make any of his patented spectacular scramble plays. It also kept Owens from doing too much damage once it became clear he was more than just a hobbling decoy. The Patriots forced four turnovers.

And their injury-mangled secondary, already a work of sealing wax, chicken wire and moonlighting wide receivers, took yet another hit when safety Eugene Wilson hurt his arm covering a punt late in the first half. They survived it, though Wilson's replacement, Dexter Reid, was partly responsible for a couple of touchdown passes.

In short, it was a pretty typical Patriots win. There wasn't a lot in the way of spectacular highlights unless you count hoisting the Lombardi Trophy as a highlight.

On New England's first play from scrimmage, a little more than a minute into the game, the Patriots picked up a blitz and quarterback Tom Brady hit Branch for 16 yards and a first down. It was three punts and more than a quarter of football later before the Pats got another first down.

In the meantime, McNabb moved the Eagles from their own 26 to the New England 19 before lofting a pass up for grabs in the neighborhood of Westbrook, who watched helplessly as Rodney Harrison stepped in front of him for the first of his two interceptions. An opportunity missed.

It was one of many errant throws by McNabb, who began the game whizzing fastballs over his receivers' heads, then settled into a pattern of mixing in a few good throws with a lot of bad ones.

He made wide-open receivers lunge for short tosses in the flat, threw behind men running crossing routes, overthrew others. McNabb threw for 357 yards and fired a brilliant, off-balance touchdown strike to Westbrook, ond of three TD passes. But he also threw 18 incomplete passes and three interceptions. It wasn't a great night for him.

It wasn't a great night for Brady either, just an efficient one. He hit 23 of 33 passes for 236 yards and two touchdowns. Brady and Kevin Faulk collided on a play-action fake on second-and-goal from the 4. Brady fumbled and the Eagles, leading 7-0 thanks to an 81-yard drive highlighted by a 40-yard gain on a circus catch by Todd Pinkston, recovered. It was Brady's only major error.

The Eagles failed to move the ball, and a short punt gave the Patriots a start at the Philly 37. Less than four minutes after the fumble, the Pats were right back at the 4. This time, Brady hit David Givens, inexplicably alone in the end zone, to tie the game.

The Eagles had outplayed the Patriots, but the half ended with the score 7-7. Philly turned the ball over in the red zone and failed to make hay out of a similar New England turnover. The Eagles also mishandled the clock late in the half, depriving themselves of a chance for a late drive. We'll never know what would have happened had the Eagles made the most of their opportunities. All we know is that the opportunities were there.

"We were too sloppy to win," Owens said. "We could have won and that hurts."

The opportunities wouldn't be there in the second half. The Patriots took the kickoff and marched 69 yards on nine plays, with Branch accounting for 71 of the 73 forward yards on the drive -- Dillon was thrown for a four-yard loss -- with four catches. Brady hit Vrabel, who fought his way off the line like an offensive pro, for the go-ahead score.

The Eagles might have folded at this point, but their best moment was still to come. After a trade of punts McNabb led a smart drive for the tying touchdown, hitting seven of eight passes for 66 yards, including that 10-yard bullet to Westbrook for the score.

But now the Patriots were clicking on offense. Had enough of Deion Branch and Corey Dillon? Try Kevin Faulk, catching passes of 13 and 14 yards and running for eight and 12 as the Patriots went 66 yards in nine plays with Dillon, who also ran for 14 yards on the drive, going in from the 2.

Dillon, after seven pearls-before-swine years of superior running for inferior teams in Cincinnati, had given the champs a fourth-quarter lead they wouldn't relinquish. He wasn't the hero of the game, but it was a whole lot better than anything else he'd ever done this late in the year in a football uniform.

The Patriots, who had failed to score the first five times they touched the ball, now had three touchdowns in their last four possessions, and they were opening big holes against the tiring, blitzing Eagles defense. New England added a field goal on its next possession, leaving the Eagles with 8:35 to overcome a 10-point lead. On second-and-8 from his own 28, McNabb made another errant throw. Tedy Bruschi intercepted, and the Eagles were on the critical list.

They managed to get a defensive stop and then started at their own 19 on a strangely leisurely drive that took nearly four minutes to mosey its way to the New England 30. But then McNabb made another of his rare good throws, hitting Greg Lewis down the middle for a 30-yard score just after the two-minute warning. But the Patriots recovered the onside kick, and the Eagles were done. Philly got the ball back at its own 4 with 46 seconds left and, again taking an oddly measured approach, had its hopes die on Harrison's second interception.

Patriots coach Bill Belichick is now 10-1 in playoff games, a half game better than the iconic Vince Lombardi, though he has only three championships to Lombardi's five. But Lombardi was winning titles in Green Bay against 13 other teams. Belichick is beating out 31. And he's doing it in an era of free agency and a salary cap, which supposedly combine to make sustained success difficult.

The Pats are now among the league's all-time elite, joining George Halas' 1940s Bears, Lombardi's '60s Packers and the Troy Aikman-Emmitt Smith-Michael Irvin Cowboys of the '90s as the only teams to win three league titles in four years.

They've done it pretty much the way they did it Sunday in Jacksonville, with the kind of defensive game plan that makes one of the NFL's better quarterbacks look out of sorts and off his game, with punishing hits, a squadron of offensive contributors and a minimum of mistakes.

And not much for the highlight reel. Mike Vrabel juggling that touchdown pass before hauling it in isn't going to make anybody forget Lynn Swann's far more picturesque version of the same thing three decades ago. But that's OK with the Patriots. Just as long as NFL Films gets a shot of that trophy, this year's movie is another winner.