How Bill Gates cured my PMS

My Irrational Bitch side was wreaking havoc with my life -- until I told my computer to remind me that it was that time of month. 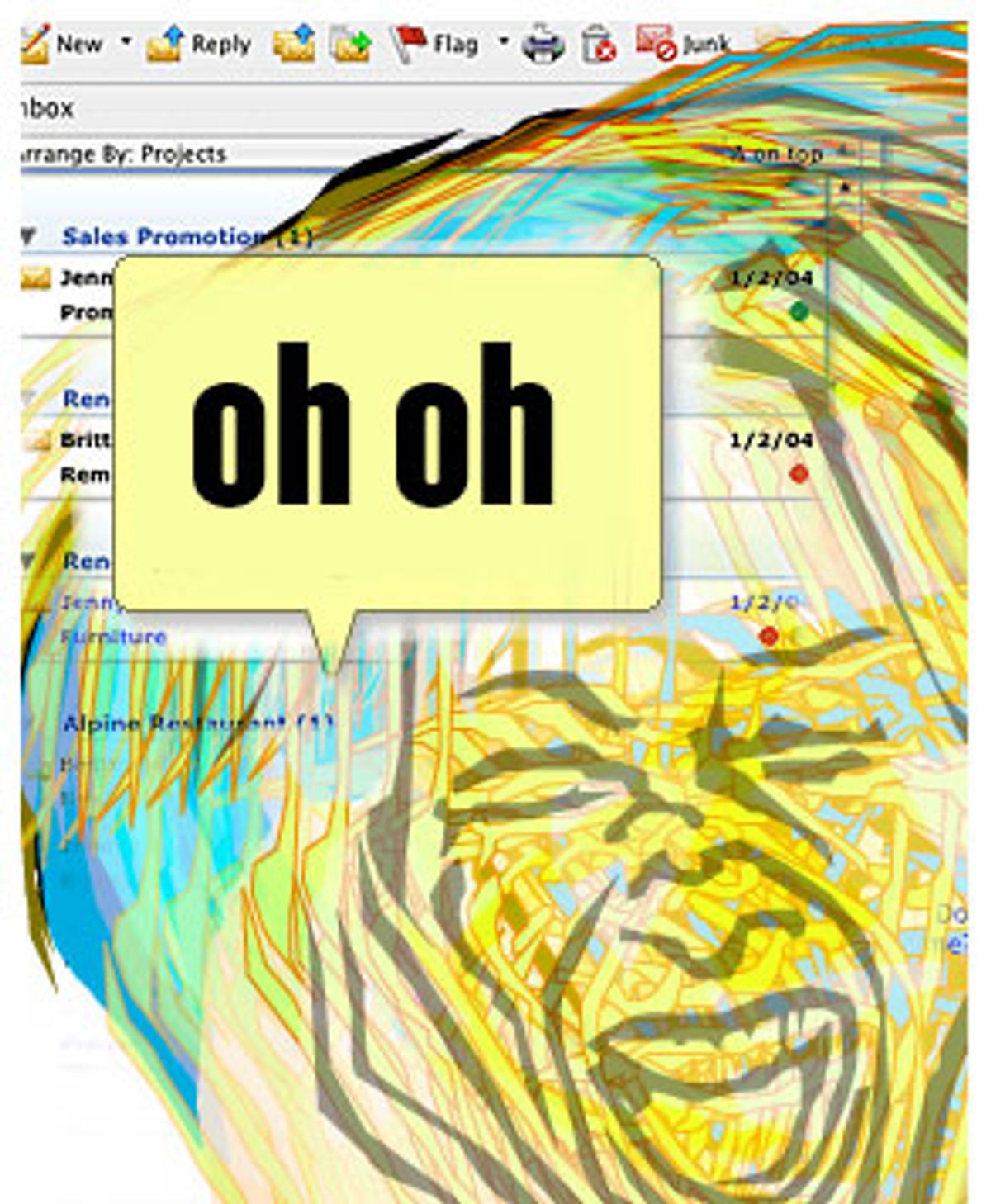 The familiar list of PMS symptoms we've all seen -- tension, irritability, moodiness, depression, etc. -- never includes what for me is PMS's most difficult symptom: myopia. I don't mean myopia in the ophthalmic sense, but rather the shortsightedness that makes it impossible to see that your tension, irritability, moodiness and depression are being caused by PMS, and not by the universe's cruel and ugly indifference, your boyfriend's cloaked hatred, your boss's plot to destroy you, or your general failings as a human being. It becomes difficult to see that the problem isn't with you -- it's with your hormones.

I hate that word -- hormones -- and the way it dismisses real emotional states so blithely, the way it's used as the answer to virtually any woman's health question, the way it's used to explain why women shouldn't be president. But it was tough to deny that hormones were screwing up my life on a monthly basis. Tough to deny, that is, unless I was under their spell. If you asked me in the before stages, I'd admit that yes, I'd had problems with PMS. And in the after stages, I'd realize that, yes, last week's fit of grumpiness/impatience/murderous rage might have been due to PMS. But it was in the crucial during stage that the myopia would set in.

Then I realized that Entourage, Microsoft's information-management program for Mac users, had a "monthly reminder" feature, and I thought my problems were solved. I'd send a reminder message to myself and one to my husband. The monthly fights I picked with him, I imagined, would all be forgiven if he knew the real reason for my hypersensitivity and dismal self-absorption. If hell week came and I attacked him, he'd either ignore me or sweetly put his arms around my shoulders and say, "Here, honey, I think you might need some time to yourself and this bag of chocolate-covered pretzels."

The computer approach also appealed to me because it was chemical-free. I'd looked into medications, particularly Sarafem (Prozac in a PMS-pink package), but dismissed it once I learned that I'd have to take the drug day in and day out. If I could just pop a pill on the days my mood was blackest I might have considered it, but taking drugs every day for a once-a-month problem made little sense to me, especially when there were so many side effects. The various homeopathic roots and berries also held little appeal. I may be an irrational bitch from time to time, but I still need rational, scientific evidence to persuade me to take a medication, whether from the pharmacy or the health food store.

My husband and I had just had a particularly bad patch, fighting for about three days straight. Then I got my period. And I had to offer a shamefaced apology, admitting, reluctantly, that perhaps I'd been a bit unreasonable. "But I was PMS'ing," I pleaded. "And I hope that this won't happen again." I proceeded to explain my plan to "invite" him to my period via monthly e-mail reminders, so that he would know what to expect. He gave me an uncomfortable "I don't want to know nothin' 'bout no female stuff" look, but this new, unasked-for level of intimacy I was about to pull him into, he admitted, seemed preferable to repeating an ordeal like that of the past few days. So he went along.

I went into Entourage, clicked on "New Calendar Event," and typed in "Linda's Period." I created a new category color for the event: hot pink. I clicked "Recurring event" and entered "Recurs every 28 day(s)." And then I clicked "Invite Attendees" and entered my husband's e-mail address.

I'd scheduled the reminder notice to go out one week in advance of my period. But I don't think my husband fully understood the "pre" part of premenstrual syndrome. The first month into our new system, after a week of bitchiness, my period finally came, and with it relief. When the worst was already over, he came in the door with a grocery bag. "I brought you chocolate and steak," he said. My heart melted. But where was he a week ago?

The monthly reminders continued to arrive with mixed results. When the tension, impatience and fighting failed to disappear, I'd stomp over to my computer, check my calendar program and wonder, "He should know not to mess with me! Didn't he get the reminder notice?" During one particularly frustrating month, I angrily logged in and clicked "cancel invitations." If he wasn't going to get it, why bother letting him in on my female troubles? He certainly wasn't letting me off the hook as I'd hoped he would.

After several months, I slowly realized that it wasn't his responsibility to indulge me. Rather, it was my responsibility to keep myself in check. The PMS was my problem, and I no longer wanted to make it his. So I had to shift my thinking from "OK, I'm premenstrual, so get out of my way," to "OK, I'm premenstrual, so in what ways am I more likely to be hotheaded and bitchy and see the world in the most negative possible terms?" It wasn't just about issuing warnings to my husband; it was about bringing awareness to myself.

This was when the real work began. Although I'd been using the Entourage reminders for a while, it wasn't until after several months that I began to fully own up to my own role in the drama. And that little pink pop-up didn't cause my moods to instantly dissolve as I'd hoped it might. Initially, I'd thought that I'd see the message, laugh at myself and say, "See how silly you're being?" and then slip back into my usual self. Before I could do that, however, I had to fully confront what a histrionic, maudlin, self-pitying, whining shrew I was being. Now that Entourage was giving me full and fair advance warnings each month, "I couldn't help it, I had PMS" no longer seemed like a reasonable excuse. I needed to force the logical side of my mind to grab the weepy side by the shoulders and yell, "Keep it together, woman!" The impersonal, automated, just-the-facts-ma'am messages that appeared on my monitor every 28 days helped me to do just that.

The messages read simply, "Linda's Period," but the real message was, "You're about to become really unreasonable and moody in the next couple of days, so deal with it." And a computer is the ideal medium for such a message. Entourage is neutral and emotionless. It doesn't have any stake in the game. I'm not likely to take its warnings personally. If I'm in a bad mood when it sends me the reminder, I won't bite its head off. Shooting the messenger makes even less sense when the messenger is yourself, via e-mail.

No human could possibly remind me about my impending gloom with such effectiveness. Had a reminder been coming from my husband, I could just dismiss it by saying, boohoo, he doesn't care about my suffering. Had I enlisted a girlfriend to phone me once a month, the conversation would have probably devolved into an hour-long pity party. But sympathy wasn't really what I needed to take charge. Awareness was what I needed, awareness delivered in time with my personal lunar rhythm. And no girlfriend could possibly be as dependable as Entourage, because Entourage doesn't have its own life. It's just there to serve you, and to tell you what time it is.

Even a wall calendar couldn't have been as effective. For one thing, just sitting down, counting out the days, and inking in a year's worth of PMS would have been a hassle, and knowing me, I would have never gotten around to it. Plus, I don't really focus on my wall calendar each day the way I do my computer. My computer screen is more private, too. Anyone can look at my calendar, and who wants to see a big, embarrassing, red-inked "PMS!" on the kitchen wall? What's more, if I was PMS'ing and wanted my husband to know, I'd have to own up to it, take him by the hand, and walk him over to the calendar, pointing at the date. Too tall an order. Being unreasonable is embarrassing, and it's easier to have a computer program deliver an embarrassing message than it is to deliver it yourself.

The other good thing about having my reminders on the computer rather than inked into a calendar is that I can easily make adjustments to account for irregularities. The reminders did need some tweaking from time to time to ensure that they continued to sync with my period, which isn't as precise as my Mac's clock. But the maintenance is a lot easier to deal with than my monthly train wrecks were, so I'm happy to do it.

So now when I get my reminder message, I prepare myself for a potentially tense week. And if I find myself screeching at some guy who changed lanes in front of me, if I find myself incapable of moving my head off the pillow, if I find myself wishing that everyone would just go away and leave me alone for a few months, I don't get mired in the mood. I'm better able to take a step back, remember that it's "that time," and try to distance myself from my temper. I still get tense, irritable, moody and depressed, but there's now a part of me that can see that in a couple of days, things will be different.

Armed with greater hormone awareness, I'm better at kicking off the layers of misery that blanket my brain. Yes, the problem is biological, but it isn't destiny. There is an element of choice. I don't choose to wake up feeling tragic, but I can choose to nurture that feeling or to fight it. So I fight it, with a combination of healthy self-indulgence and honesty. I just grab a chocolate bar, tell my husband "I'm PMS'ing," retreat to the bathtub, and lock the door. I'll know I'll be back soon.