I was a Bollywood stuntwoman

Working as an extra in the world's biggest film industry has become a tourist attraction. No wonder -- it allowed a nobody like me to instantly rub shoulders with a star who makes millions of Indian women swoon. 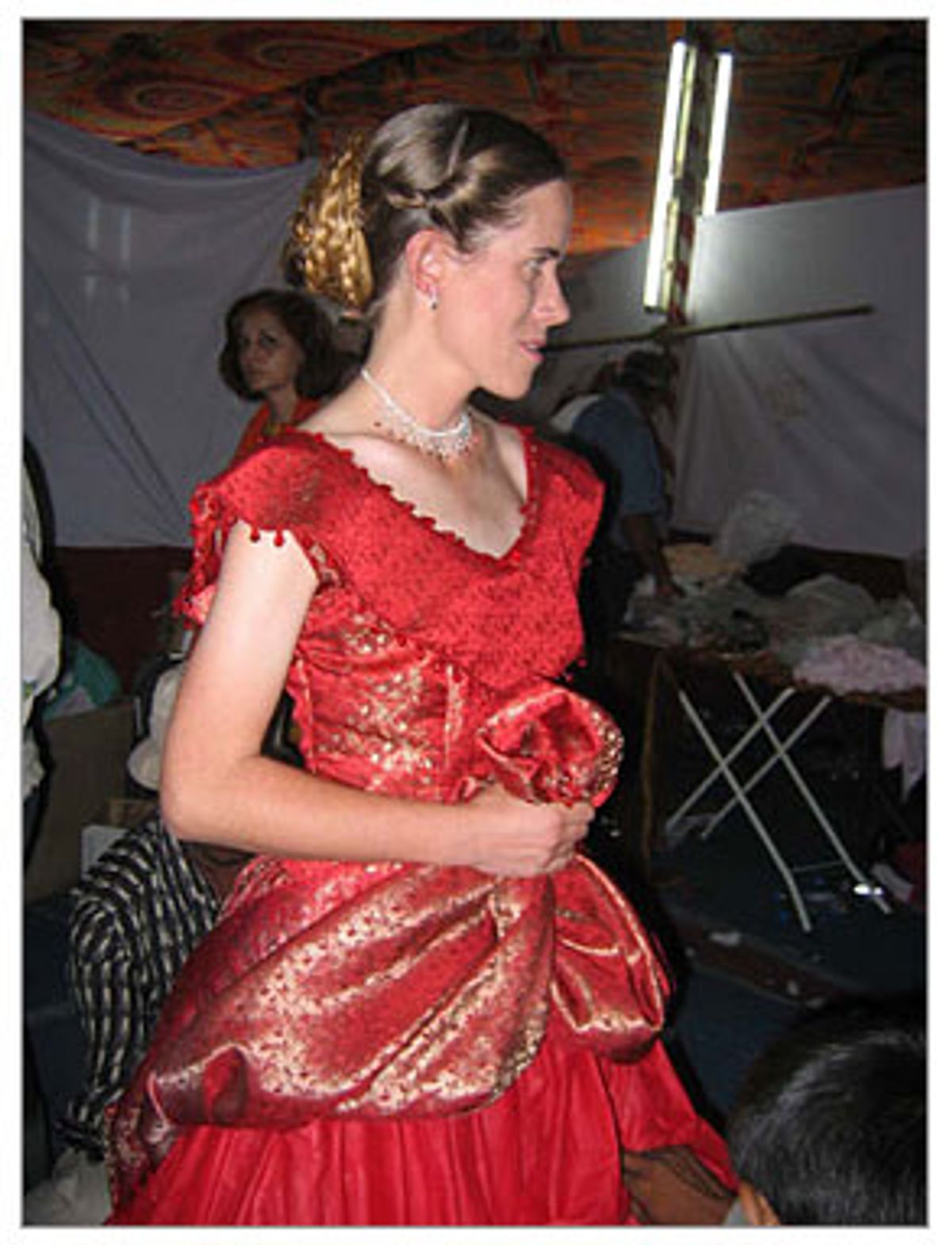 I was a Bollywood stuntwoman. I like saying that. If I lived in a place where people threw cocktail parties, rather than in the cow tundra of upstate New York, that's the first thing I'd say while reaching for a canapé.

The pinnacle of my short but glorious career came a few weeks ago, when the Indian epic "Kisna" opened at theaters around the world, including in the U.S. It was Bollywood's biggest release so far this year, by India's showiest director, Subhash Ghai, and marked a significant step in international relations: The lead actress isn't local, but British and blond. I was her stunt double. On holiday in India, and with no acting experience, I found that the fastest road to filmdom may begin in Mumbai.

Yes, aspiring starlets. Get there now, before the small but savvy number of booby Russian and Bolivian girls, already clutching portfolios, takes over. The average Indian film is a challenge of taste -- "Our biggest problem today is that 90 percent of the films are flopping," Ghai has said -- but it's a mistake to ignore the colorful job market behind them. The Mumbai film industry makes more movies a year than anyone in the world, and the need for non-Indians is growing, especially now: As Bollywood producers see larger chunks of their box office from overseas, they're making more films with foreign faces.

It's not the smoothest transition. Ghai told an Indian film weekly that, for his "Kisna" heroine, "I needed a country girl with an angelic face, endearing to the Indian masses despite being a white girl." (He neatly solved some problems by making a second, shorter, English version: "The Warrior Poet," releasing later, features a kiss between the Indian hero and the British heroine that, for cultural reasons, might not play well at home.)

Big-budget epics like "Kisna" aside, the non-Indian exotic does play in India, as a gimmick. To put it superficially, as Bollywood can do so well, some moviemakers are very, very open to displaying swiveling young blondes. So listen carefully, celluloid wannabes, as I tell you how I broke in, and take heart: I'm neither booby nor particularly beautiful, but there I was, swinging with the stars.

Step 1: Arrival
Sharky, tight-jeaned boys stand sweating on street corners in the backpacker district of South Mumbai. They wait patiently, cellphones buzzing in hip pockets, skimming over the dirty and the clearly stoned, looking for the freshest faces, often so fresh that they're just now tumbling out of taxis, fat Lonely Planet guidebooks in hand.

Action. The boys slide over and make the pitch. Want to be in a film? Just get in this car. There's little time to ask questions or negotiate prices, and that's how the casting agents like it. It's surprising how many tourists suddenly agree to follow a stranger. "My friends did it," they say. Or simply, "Oh, what the hell."

Whatever happens next, it's your fault if you didn't press for details. That "film" might be a commercial for ab enhancers, or a soap opera in which you spend eight hours in a damp leisure suit, for about $10 a day.

What unfolds daily, especially now, at the height of the shooting season, is an odd scene where Westerners resemble certain Mexican laborers - picked up from street corners, without the proper work papers, by shady middlemen who keep a generous dose of a long day's pay for themselves. And yet, being a Bollywood extra is a growing tourist attraction. For most travelers it's a one-time playground, a future freak story to tell over beer. For others, it's the entry to a possible job.

Already, young foreigners -- from film-school graduates to short-skirted women waiting in the lobbies of high-class hotels -- are nibbling at Mumbai's entertainment industry. I met a man from New York who, knowing nothing about Bollywood, became a bodyguard for one of India's biggest actors. He worked his new connections, appearing in runway shows, and made the Mumbai tabloids as the rumored new lover of a dimpled starlet.

Knowing a bit about Indian films, I didn't wait for chance. I worked the places where casting agents hovered, around the Salvation Army Hostel and a restaurant called Leopold's. I walked up to the boys, got their cell numbers, wiggled my copy of the Indian film magazine Stardust suggestively and started work the next day.

Step 2: Networking
Within weeks, with the help of the casting boys, I had met some of Bollywood's biggest stars. I shook hands and got the phone number of the sexiest of all, an unlikely looking man with a big nose and shaggy hair named Shahrukh Khan. Most Americans have no idea who Shahrukh is. But mention his name to your female Indian, Pakistani or otherwise South Asian co-worker in the next cubicle and listen for the thud as she faints away. As hundreds of young Indian men pressed against the fence around the set of Shahrukh's new Pepsi commercial, I sat within a couple of chairs of the man, a "friend of the crew."

Indian actors seemed to like us foreign extras. Maybe they saw us as a break from the gawkers, assuming we didn't know them from the key grip. Usually, we didn't. "I thought he was the horse trainer or something," one foreigner said, after I pointed out India's most respected actor, the Oscar-nominated (for producing "Lagaan") Aamir Khan.

I found complete unconcern on the set for who I was and what I did. I could play with the on-set elephant or eavesdrop on actors complaining about Bollywood's gay casting couch. Being foreign and assumed ignorant, I was harmless.

That appearance opened many doors. Without really trying, I not only met stars but became a casting agent, a dancer, a pitch-making screenwriter, a documentary assistant and an aspiring film journalist, all in less than four months. That someone like me cared about Indian films was novelty enough to win one shot at anything.

I walked the beaches of Goa, handing out casting cards to pretty girls. I watched a real-life Bollywood diva, a top film critic, show off for me by abusing her young male employees, and I had Subhash Ghai's screenwriters nodding at my movie pitch (a crossover film for Shahrukh Khan) and suggesting that I add a goofy gay character. It started to feel a little Hollywood to me.

But I hadn't yet stepped in front of the lights.

Step 3: Exposure
The usual role for a non-Indian woman in Bollywood involves bouncing in the background of a nightclub scene, or posing as a stewardess. I did both. But last season's film shoots offered changing roles.

I became a ballroom dancer in a period film called "The Rising," with an Indian-British cast. Excited and wanting to stay on set, I led a small mutiny of women so we could also play soldiers, mustaches and all. A friend from Texas, as Caucasian as they come, even talked his way into a speaking role. On the easygoing set, he took the star, Aamir Khan, aside and taught him to play the bugle.

At the end of my shoot for "The Rising," I was offered a job as an assistant director, based on nothing but my enthusiasm and the fact that I showed up every day. Unfortunately, the producer's daughter was the only person in Mumbai who cared about my background, and when she heard I was a writer she kicked me off set. I sulked.

But then, a casting boy offered the stunt job. They needed a blonde, he said.

At its bottom fringe, and possibly higher, the Indian film industry doesn't bother with contracts, insurance or even film credits. I knew this and said yes, knowing I'd get none of the above, and hoped it wouldn't get dangerous.

Arriving on a secluded set east of Mumbai, I was asked if I could ride a horse. Of course, I said, although I couldn't. Looking satisfied, an assistant director pointed me toward an unexpected prize: In less than four months in Bollywood, I had won my own trailer.

Freshly dressed and powdered by my personal attendant, I curled up on a window seat like a queen. The Indian star, Vivek Oberoi, strolled by. Oberoi was dating the popular Indian actress Aishwarya Rai, the star of "Bride and Prejudice" and described by Julia Roberts herself, as the press reports put it, as the most beautiful woman in the world.

Oberoi was friendly but tough. I later watched him dive from an on-set crash, squirm on the ground with a dislocated shoulder and reset it there, in the dust, by himself, while the directors went over the footage.

That afternoon, I was summoned to the set and bounced, thigh to thigh, with Oberoi in a horse-drawn carriage. I chatted easily with him and with the British actress I was standing in for, an award-winning horsewoman but uneasy about riding so far from home. Giggling, she described the audition for her role, where the director asked her not for a monologue, or even acting, but a series of Spanish soap opera-esque poses: sadness, jealousy, anger. "What's my motivation?" wasn't important, as long as her tears were pretty.

Step 4: Conflict and resolution
Just as a future of personal trailers stretched ahead, I became involved in an "All About Eve" struggle against a contender for my slender role. The innocent smile was no less a threat than the quiet, assured and sudden arrival. His name, I learned, was Rajkumal.

My very own stunt double, and he was a man. A slight young Indian man with a long, tangled, orange-blond wig pulled too close around his eyes. He had stubble on his chin, hairy legs under his skirt and heavy pancake makeup on his face and arms. I was quietly outraged. But he certainly could ride a horse. He could saddle it, too.

Rajkumal, the horse trainer, had been called because the assistant director didn't like the way I answered "Yyyyyessss" when asked about my riding. Rule to remember: When breaking into Bollywood, always speak with confidence, even when lying.

In the end, we split the job; Rajkumal handled the galloping carriage and I did the softer stuff. Because the wardrobe staff wasn't prepared for stunt doubles having doubles, we had to share a single sweaty pair of shoes.

I came to hate my little encounters with Rajkumal, the two of us in matching dresses, hopping around, with the cast and crew watching. "His value is going up, yes?" one actor said slyly. I should have kicked him. Anyway, I still got paid.

If you can't see the girl's face, it's probably me. Unless it's a certain hairy-legged man.