Questions remain about how a fake reporter working for a fake news operation got White House press credentials without a background check. 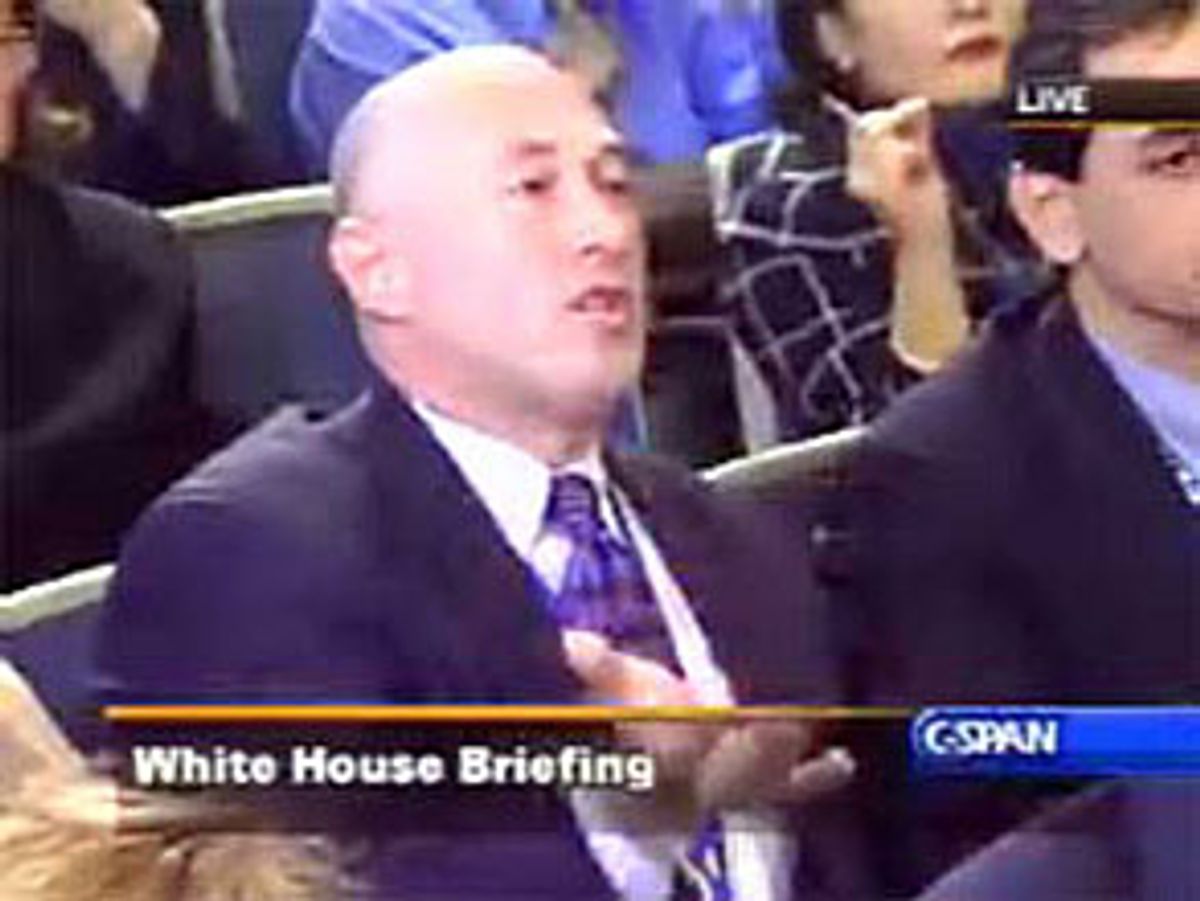 Before abruptly quitting his post this week as White House correspondent for the GOP-friendly group Talon News, Jeff Gannon enjoyed unfettered access to White House briefings. He gained that access not by going through the normal full background check most journalists face when obtaining a "hard pass," the ultimate White House credential, but rather by getting day passes, which require only an abbreviated background check. According to one current member of the White House press corps, Gannon was the only reporter to skirt the rules that way, obtaining daily passes month after month for nearly two years.

That's just one of several questions that continue to swirl around the man who covered the White House under the pseudonym Jeff Gannon -- his real name is James Guckert -- and his abrupt departure from Talon News. After Guckert piqued interest in the blogosphere with an overly obvious softball question to President Bush at the Jan. 26 press conference, online sleuths uncovered the truth about Talon's close working ties with Republican operatives and their GOPUSA Web site as well as past identity. Faced with allegations that he was tied to gay-themed Web sites, Guckert resigned his Talon position Tuesday night. (Talon has posted scores of anti-gay articles.) Still left unanswered, though, is how a partisan novice reporter working for a fake news organization was able to gain regular access to White House briefings.

Hard passes to the White House are designed to give journalists who regularly cover the White House easy access: They simply swipe their credentials at the entrance while the Secret Service checks their bags. Day passes, which are picked up every day at the press office, are intended to provide flexibility for out-of-town journalists who might need to cover the White House for a day or two, or to allow White House reporters to bring in visitors who want to see the press briefings. But the current day-pass system was not set up to give permanent access to reporters who, like Guckert, fail to qualify for a hard pass.

The White House press office continues to be non-responsive to Salon's questions about the credentialing process and Guckert's apparent ability to rig the system. At Thursday's daily press briefing, White House press secretary Scott McClellan fielded several questions on the issue. He told reporters that Guckert had "never applied for a hard pass. He had a daily pass." Guckert's ineligibility for a hard pass -- the likely reason he never applied -- was left unmentioned.

To receive a hard pass, a journalist must submit a letter confirming that he or she works for a legitimate news organization, lives in the D.C. area, and needs access to the White House for regular news stories. But before the White House will send the request along to the Secret Service for a background check, the journalist must also confirm having received accreditation to cover Capitol Hill. Without Hill credentials, the White House will not forward a hard-pass application. Gannon had no such credentials.

But not because he didn't try to get them. On Dec. 12, 2003, Guckert applied to the Standing Committee of Correspondents, a group of congressional reporters who oversee press-credential distribution on Capitol Hill. On April 7, 2004, his application was rejected when the committee could not conclude that Talon was a legitimate, independent news organization. "We didn't recognize the publication, so we asked for information about what Talon was," Julie Davis, a reporter for the Baltimore Sun who is on the committee, previously told Salon. "We did some digging, and it became clear it was owned by the owner of GOPUSA. And we had asked for some proof of Talon's editorial independence from that group ... They didn't provide anything, so we denied their credentials, which is pretty rare," she said.

It's curious that the White House seemed disinclined to hold the Republican-leaning Talon News -- whose "news team" is made up of political activists with no journalism experience whatsoever -- to the same standards as the committee's. On Wednesday, McClellan insisted that all Guckert had to do to gain entrance to the White House was show "that he was representing a news organization that published regularly."

Still, without any hope of Hill credentials, Guckert had no prospect of landing a White House hard pass, so he simply adopted the day-pass system and turned it into his personal revolving door. In doing so, he created his own variation on a now-defunct third category of White House press pass, called the card index, which once allowed journalists to gain access to press briefings for weeks or months a time. But this system is defunct for one simple reason: It's not secure enough. Following the Sept. 11 attacks, the Secret Service did away with the card index, according to Martha Kumar, a professor of political science at Towson State University and an expert on White House press operations.

Indeed, security is a significant difference between the two types of passes that still exist. The hard pass requires a lengthy background check, punctuated by fingerprints and photographs. Someone picking up a day pass, however, simply presents a name, Social Security number and date of birth while the Secret Service does an instant check. That means Guckert, who covered the White House for nearly two years, was never subjected to a background check. Additionally, questions remain whether his passes were issued under his alias or his real name.

On Wednesday, when asked directly whether the reporter was being cleared by the White House under the name Guckert, McClellan hedged: "My understanding, [is] yes." McClellan did confirm he knew previously that "Jeff Gannon" was not the reporter's real name.