Despite this romantic comedy's considerable flaws, Will Smith wins our hearts as a "date doctor" who counsels men in the ways of love. 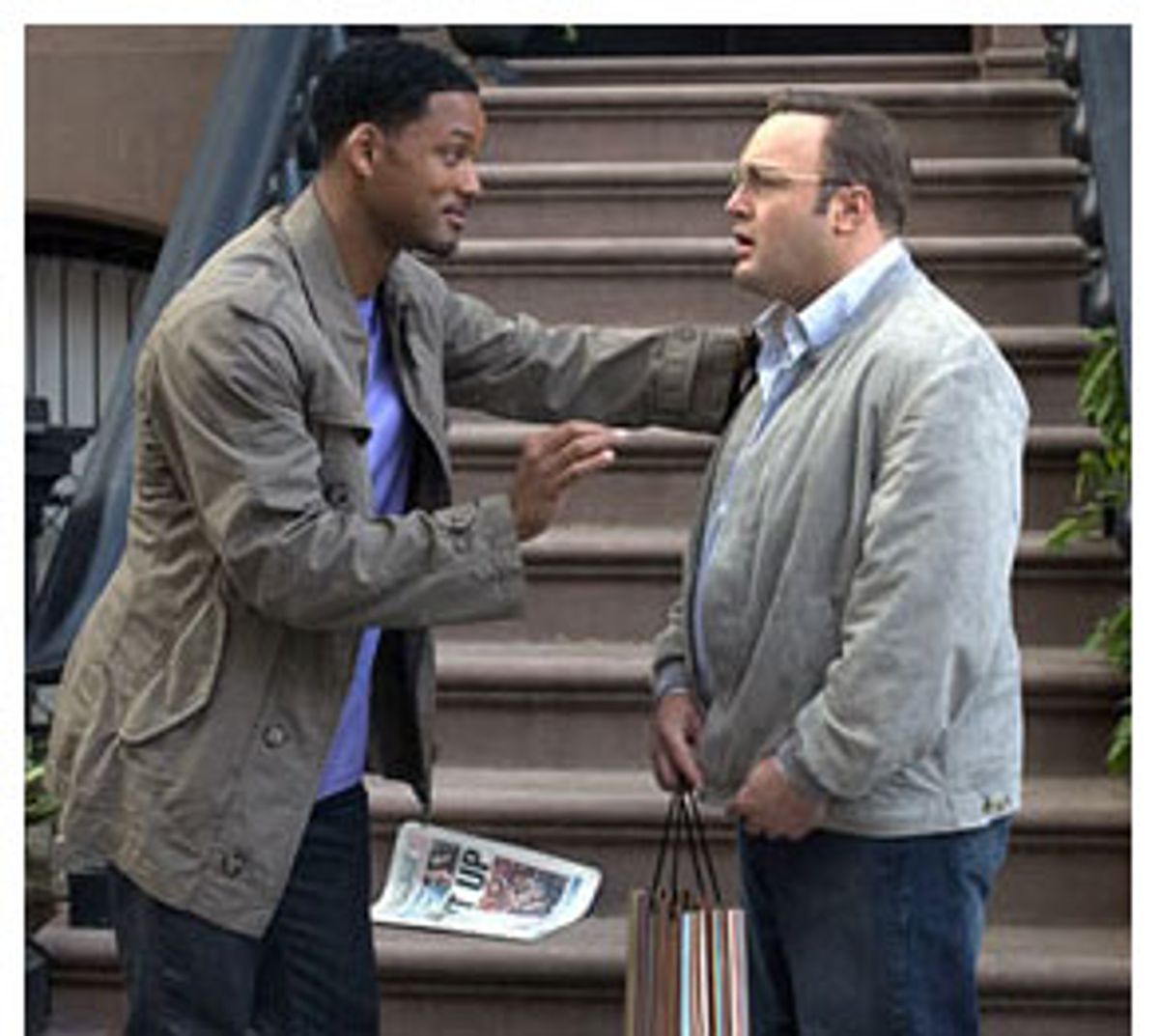 Anyone with a sense of movie history recognizes that Hollywood doesn't make 'em like they used to. Movies, by and large, seem to be getting worse (although part of the reality is that there are so many being made today that the good ones are more likely than ever to get lost in the swirl of bad ones). For that we blame the forces who put these travesties together -- namely, producers, writers and directors -- although studio marketing departments, who decide what the public wants to see and shape the studios' upcoming slate accordingly, may more often be the ones at fault. We the moviegoers, forced to sit through clumsy action pictures and bland romantic comedies -- after having paid good money for that privilege, no less -- suffer more than anyone.

Or do we? Because despite the inflated salaries that top movie stars like Will Smith are paid, I can't see that pictures like "Hitch" are doing them any favors. Even if you believe that movies are getting worse, actors aren't. And "Hitch," directed by Andy Tennant (who made the exceedingly charming "Ever After," as well as the sugary bit of cardboard known as "Sweet Home Alabama") and written by first-timer Kevin Bisch, is just the latest example of a movie that doesn't have to be as bad as it is, considering that it's peopled with enjoyable performers, actors who possess either outright charisma or at least an acceptable amount of likability. Why is it so hard to build good pictures around these people?

Here Smith plays Alex "Hitch" Hitchens, a Manhattan "date doctor" who counsels lovelorn men on how to meet, impress and win over the women of their dreams. Hitch gets clients by referral only (he doesn't advertise), and he takes pride in his high success rate -- an early montage shows an attractively nebbishy fellow pursuing, and captivating, a stunning, well-manicured New York hottie. But Hitch has no inclination to settle down himself: As good as he is at helping his clients find true love, he prefers to bum around the playground of beautiful women that is New York, dazzling them with his deceptively spontaneous-seeming pickup lines and, of course, his heart-stopping smile.

If I were a guy, that would sure sound like fun to me, but of course, Hitch must learn that he's actually missing something. (A married friend of his, played by Michael Rapaport, lectures him on that score, droning on about the "unconditional love" he's lucky enough to share with his wife -- forget that anyone who knows anything about long-term love understands that the last thing it is is unconditional.) And quite by accident, Hitch finds himself at first attracted to and then smitten by gossip columnist Sara Melas (the appealing and dazzlingly curvaceous Eva Mendes, whose derrière looks as if it were plucked from God's personal peach orchard). Unbeknownst to Hitch, Sara is hot on the trail of a story involving a gorgeous heiress named Allegra Cole (the sweet, understated Amber Valletta). And Hitch is currently working with a clumsy but well-groomed accountant named Albert (the affable Kevin James, of TV's "King of Queens"), who's hoping to win Allegra's heart.

"Hitch" is reasonably enjoyable at the start, not least because we recognize early on that we're going to be spending time with people who know how to take charge of a movie screen -- in particular, that means Smith, although the movie's supporting performers hold their own, too. And although New York is the most romantic city in the world (as long as the occasional scurrying rat doesn't bother you), "Hitch" makes it look even more so: Instead of stooping to the trick of making the city look uncharacteristically dewy, cinematographer Andrew Dunn (who shot "Ever After," as well as "Sweet Home Alabama") makes Manhattan look vital and lived-in.

But as "Hitch" paddles along, we begin to see its story being stretched thinner and thinner. The problem isn't that "Hitch" is formulaic (What romantic comedy isn't? The formula is part of what we want in romantic comedy). It's just that the antics of the characters, and the conflict between the two pairs of lovers, feel wrenched into the plot, as opposed to being part of the organic whole. Everything that's original about "Hitch" -- any little detail that shows a spark of imagination on the part of a filmmaker or writer -- has to be balanced by something dumb and ordinary, just to make sure the audience "gets" it: A first date at Ellis Island (original) is set to dorky, swelling music (dumb and ordinary). Hitch gets lots of platitudinous lines that he has to deliver straight, because the movie, in all its dull predictability, believes in them: "Life is not just the number of breaths you take; it's the moments that take your breath away."

Somewhere inside "Hitch" is a fine, mainstream romantic comedy struggling to get out. But whatever the picture's considerable flaws may be, it does have Will Smith, and as an on-screen presence, he's not to be trifled with. Whenever I step into a Will Smith movie, I make a vow to myself not to fall for him willy-nilly. And then I fall nonetheless. I can think of actors who have better comic timing, or more subtle technique with a line, or a more fine-tuned sense of emotional pitch. But few contemporary actors tease an audience onto his wavelength the way Smith does: I always get the sense that the audience is in stride with Smith almost immediately (even when it can't quite get in stride with the picture overall).

He's lovely to look at in the conventional sense, although it's quite possible his teacup-handle ears (used to great effect in one scene here) are his most endearing feature. And he has a knack for delivering lines so casually, it's as if he were making them up on the spot. When a sleazy, snarling Wall Streeter tries to enlist his services so he can get more girls in the sack, Hitch tells him in no uncertain terms that he can't be bought on those terms. When the guy manhandles him, Hitch responds with a cartoonishly effective jujitsu twist that lays the guy flat, and warns him not even to try laying a hand on him again, finishing the moment with a coquettish smile and the words "OK, pumpkin?" Smith deserves a better romantic comedy than "Hitch," but at least he somehow manages to improve the material around him. It's his cupid's bow that knocks us out. Looks like another love TKO.