This rereleased 1966 Godard film about young people consumed with love, sex, politics and pop culture speaks to the teenager in all of us. 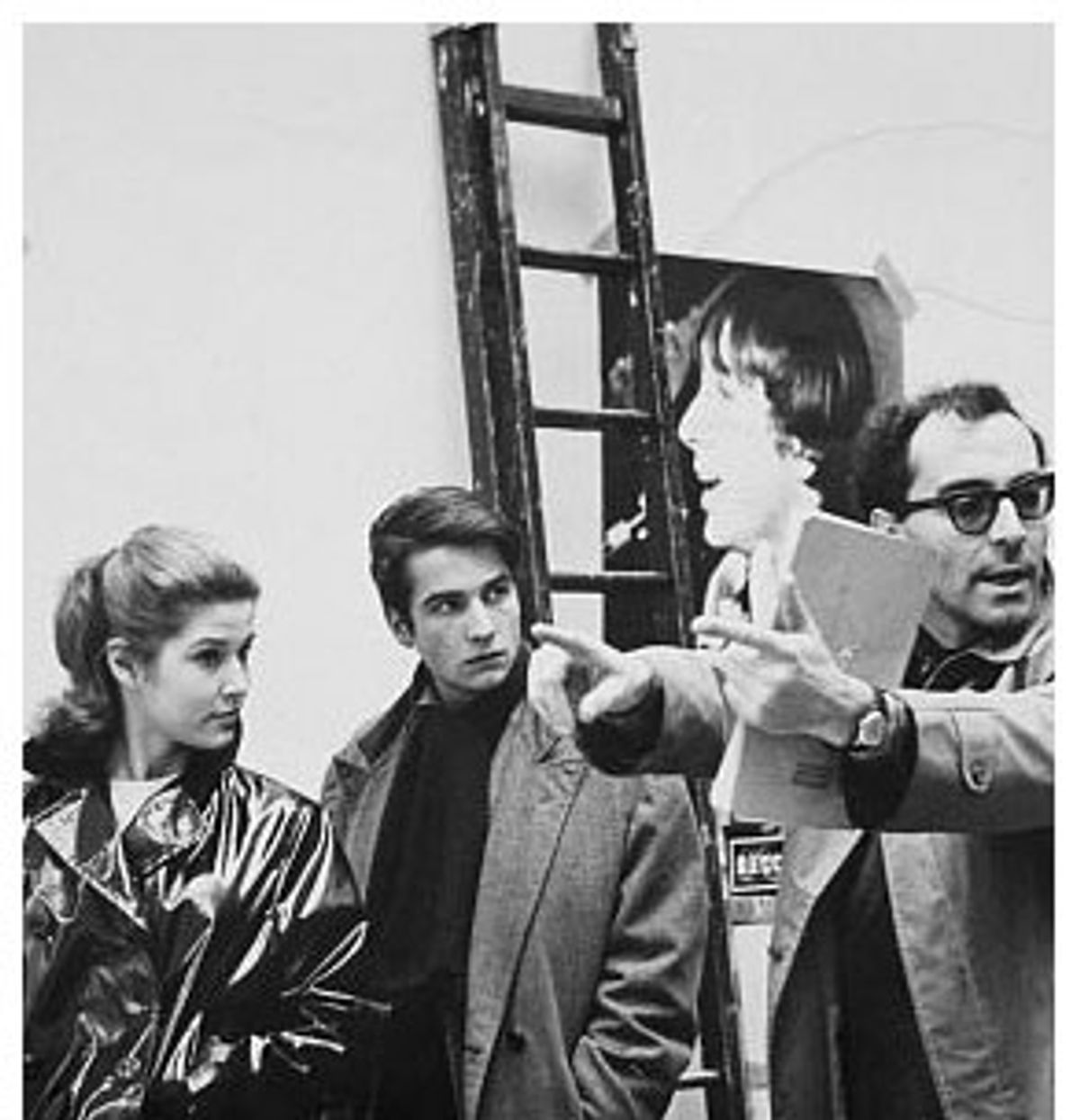 When Jean-Luc Godard's "Masculine Feminine" opened in France in 1966, people under 18 were prohibited from seeing it. The restriction made Godard unhappy, since teenagers were, he said, "the very audience it was meant for."

Perhaps all filmmakers make movies for their dream audience, a group of people they yearn to speak to, and the stars of "Masculine Feminine," Jean-Pierre Léaud and real-life pop singer Chantal Goya, certainly have the kind of faces that young people would warm to. But all movies have a life of their own that not even their makers can predetermine. So while "Masculine Feminine" is a movie about young people whose universe encompasses only love, sex, politics and pop culture (there are still some of us who wonder, "What else is there?"), it's for young people only in the way that, say, children's books are for children.

"Masculine Feminine" -- which Rialto Pictures has rereleased in a lovely new print with new subtitles, to play at New York's Film Forum and Los Angeles' Nuart Theatre begininng Feb. 11, with other venues to follow nationwide -- is really for anyone who has survived youth. Because while the young may see many things in one another's faces -- beauty, intelligence, sexual magnetism, stubbornness -- they're blind to the specific radiance that makes young faces so compelling to anyone who has come out on the other side of youth, a radiance that Godard's camera captures perfectly. The faces of "Masculine Feminine" are touching precisely because of everything they have not yet become. It's a lack that is a secret plus.

The hero of "Masculine Feminine," as tragic a hero as ever graced a bildungsroman, or a girl-group pop song, is Paul (Léaud), an introspective and politically passionate 21-year-old Parisian who has just finished his mandatory stint in the service. He sees a girl in a cafe whose face he thinks he recognizes, or perhaps he only wants her to think her face is recognizable. Her name is Madeleine (Goya), and although she has spent time working on a fashion magazine, her real goal is to become a pop singer.

Paul pursues Madeleine so relentlessly that his obnoxiousness becomes, as it sometimes does in certain boys, a kind of charm. She holds him at bay, not necessarily out of cruelty or even lack of interest, although we can't be sure what Madeleine is interested in, other than herself. She's one of those unusual creatures (and they're not always women) whose self-absorption is a kind of sponge that draws outsiders close, rather than putting them off.

Madeleine's face, with its finely formed nose and surprisingly guileless smile, is framed by a pert brunet bob. Her sophistication is the schoolgirl kind, at once kittenish and cool. Time and again Godard's camera lingers on her face, waiting for it to register something other than empty self-preoccupation. That it never does is the very point. Madeleine's face keeps us, and Paul, waiting; to turn away from it, in search of a more thoughtful face, one we might deem more worthy of our attention, is impossible. The time we invest in that face is the closest we can come to recapturing our own youth -- in other words, the feeling that time is so plentiful we don't have to ration it.

"Masculine Feminine" is structured in 15 chapters that move at a clip, like a jointed puppet that moves with astonishing fluidity. Godard injects ideas into the narrative by giving his characters voice-over lines in the form of slogans (at one point Paul reflects that he and his friends are living in "the era of James Bond and Vietnam") and by punctuating scenes with bold intertitles that splash out in capital letters: A chapter in which Paul, who has taken a job conducting surveys, interviews a pretty young woman who has just been granted the title "Miss 19," has the title "DIALOGUE WITH A CONSUMER PRODUCT."

Godard is often championed as a politically charged filmmaker, although his political ideas are rarely as interesting as he thinks they are. That's certainly true of the politics that inform "Masculine Feminine." One of the ideas Godard fixates on here is the treachery and allure of consumerism. (Famously, the movie includes an intertitle proclaiming, "THIS FILM COULD BE CALLED THE CHILDREN OF MARX AND COCA-COLA.") But "Masculine Feminine" is probably least potent as a treatise on the emptiness of mindless consumerism. (One year earlier, in 1965, John Boorman had addressed that particular subject more effectively with his surprisingly mournful first film, "Catch Us If You Can," called "Having a Wild Weekend" in the United States.)

But "Masculine Feminine" is effectively political in the way it captures the mood of a time; the picture feels combustible, like an explosion about to happen. Instead of taking the reassuring view that love hasn't changed much through the ages, "Masculine Feminine" sees modern love as a changed wilderness, particularly, I think, for men. The women in "Masculine Feminine," especially Madeleine's roommates, Elizabeth (Marlène Jobert) and Catherine (Catherine-Isabelle Duport, who resembles Julia Stiles and shows the same subtle but fierce self-assurance) speak openly (if not always articulately) about sex and birth control. When Catherine suggests to Paul that Madeleine may be avoiding sleeping with him because she's afraid she'll get pregnant, Paul asserts that he's grown-up enough to know when to pull out -- his cocky faith in the reliability of the withdrawal method is just one example of his complete sexual cluelessness.

Catherine, on the other hand, coolly asserts that she uses "a thingamajig," meaning a diaphragm. And later, when Paul interviews "Miss 19," he purposely sets out to expose how little she knows or cares about politics ("Do you think socialism still has a future?"), a way of asserting his superiority over her. When he begins asking her to name methods of birth control, we at first wonder if he's trying to trip her up again, to expose her bland innocence. But if so, then why does he back off when she starts speaking so confidently about diaphragms? Her sexual self-assurance threatens him; he quickly switches the subject back to politics, asking her if she knows what wars are being waged in other parts of the world. He needs to feel confident that he's the one wearing the pants, and flexing his intellectual muscle is the only way he knows how to do it.

The scene is fascinating because although on the surface it seems Godard is asking us to join in ridiculing this girl, in the end it's Paul's vulnerability and naiveté that are exposed. In another scene, Paul looks on with feigned indifference as Catherine plays with a toy guillotine, lopping the head off a tiny man with blasé amusement -- you couldn't ask for a more blatant metaphor for the skewed balance of sexual power between men and women. Even so, I don't think Godard's intent is to present women as ruthless predators and men as their bumbling victims. His overarching observation, made in a way that's incredibly affecting, is that playing at sophistication is part of youth -- a way of willing ourselves to grow up before we know what being grown-up really means.

Godard's view of youth may be cooler and more detached than that of his French contemporaries François Truffaut and Louis Malle. But, particularly in "Masculine Feminine," I don't think it's any less touching. Even Madeleine, whose lack of interest in everything outside her own skin (and her pop-singing career) should be repellent to us, earns our affection by exposing our hypocrisy: If we profess to love youth, should we punish a character simply because she hasn't aspired to be more than a girl?

But it's Paul we feel the most for, partly by Godard's design and partly because of Léaud's performance. Seven years before he made "Masculine Feminine," Léaud, at age 14, had been the ruffian prince of Truffaut's "The 400 Blows." In "Masculine Feminine" Léaud is no longer a boy, but even though his character has already done his stint in the army, his boyishness hasn't yet burned away. Léaud's face here isn't openly expressive: It takes a few scenes to begin to understand how to read him, to see how the real meaning of his words often comes through more in the apostrophes of his dark eyebrows than in the tone of his voice or the shape of his mouth, which seems to have been dutifully trained to forget how to form a smile.

When he arrogantly tells Madeleine that he prefers Bach to the kind of music she makes, we see him practically aching for her to connect with him: In light of her coolness toward him, he clings to every scrap of intellectual sophistication he can muster. But when, snuggled into bed next to her (with one of her roommates tucked in on the other side), he asks if he can touch her, it's his voice -- bravely assertive and yet slightly pinched -- that betrays his devastating vulnerability. During the daylight hours, in the cafes he and Madeleine haunt, his junior-grown-up bluster suggests that he wants only to conquer her. But in bed -- even with a wary roommate on the other side -- he wants only to reach her.

Earlier, Paul and his friend Robert (Michel Debord) have been musing about how the word "masculine" encompasses the words "mask" and "ass." And "feminine"? Nothing. But while Paul certainly enjoys the cleverness of the joke, he doesn't really believe in it. In the dark, in that bed, he's reaching out for something, even though he can't identify it. It's a mystery shaped like a woman, beckoning to him from the other side of his youth.

"Masculine Feminine" is nearly 40 years old, but Paul will always be 21. And although his story may have been made for teenagers, secretly, it's really for us. He's the desperate, obnoxious kid we never wanted to be, until we realized we'd never be that kid again.