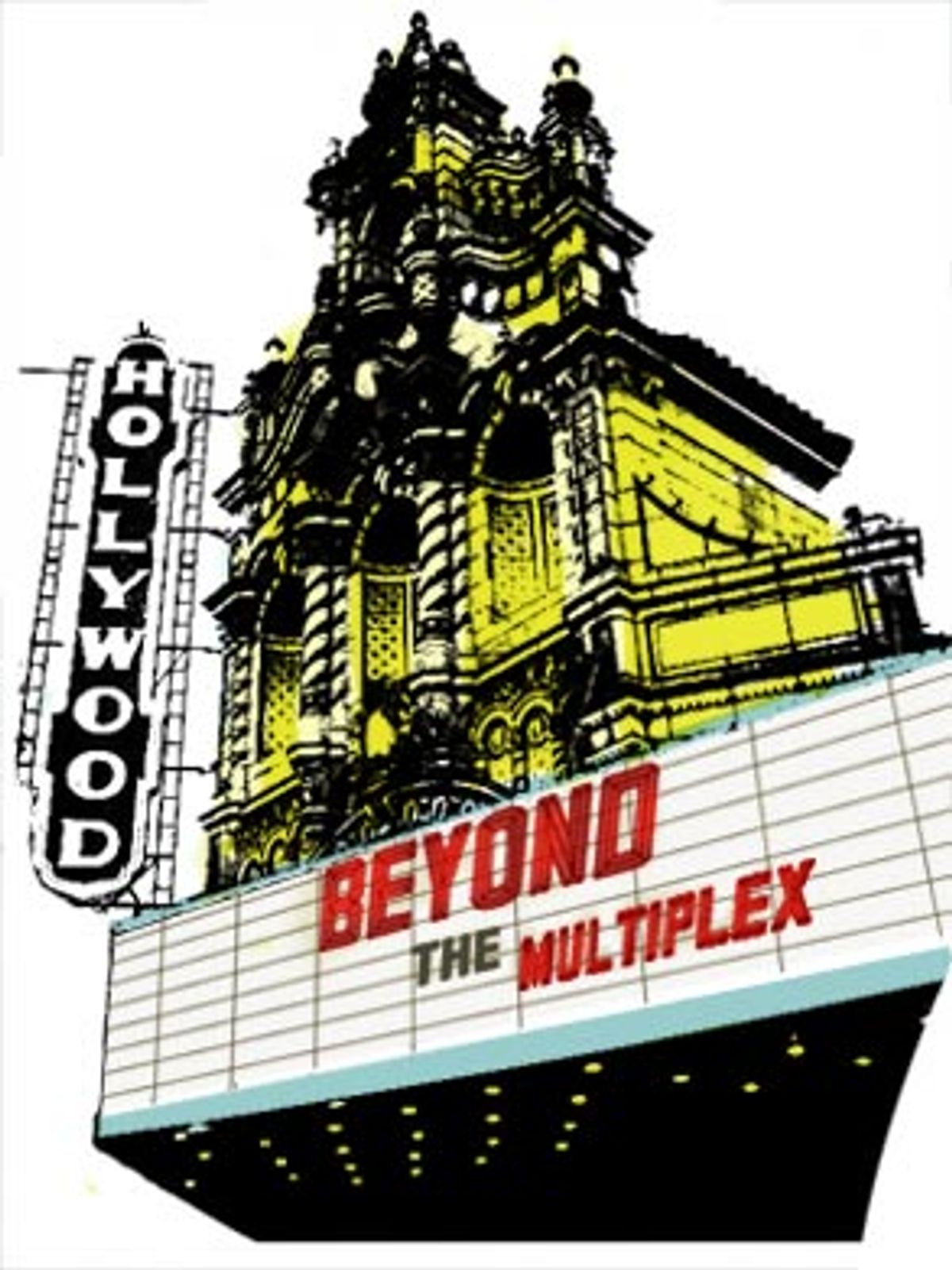 Winter's always the best time for little movies. Hollywood's cleaning the gunk out of the bottom of its collective barrel, and trying to milk the Oscar nominations for all they're worth. Harvey Weinstein has taken a break from hype-marketing Miramax's latest batch of middlebrow schmaltz, and more movie screens are available to play that drama from Uzbekistan that people liked at the European festivals, or the latest self-indulgent digital-video experiment that some kid made for $2,000.

Plus we get to suffer for art a little bit, going out through the sleet in our heavy coats and making our way to that little theater where parking is sketchy, the popcorn is lousy (but the coffee rules!), and where if you get there late your seat might be behind a pillar or 4 feet from the screen. All of which is to say that this week's column probably could be twice as long as it is, but my version of suffering for art has been to battle the latest of this season's unpleasant viruses, wrapped in blankets on the couch with a stack of videotapes from publicists. (It's a tough job, etc.)

I actually got out of the house this week to see "Downfall," the sweatily claustrophobic drama about Hitler's final days that marks the first time a German-made feature has confronted Der Führer directly in almost 40 years. (I'll be reviewing that separately on Monday.) Otherwise, though, it's a case of too many movies and not enough time. Martial-arts devotees tell me not to miss the prodigious ass-kicking of "Ong-Bak: The Thai Warrior," an old-school fu-flick made without wires or computer graphics, and documentary mavens say good things about "The Wild Parrots of Telegraph Hill," the story of a homeless musician's relationship with, yes, a flock of escaped parrots.

I haven't seen those yet, but I have seen an ambitious drama from the Czech Republic that feels like one of the major imports of the year, the latest work from Kurdish director Bahman Ghobadi (which is also the first feature made in Iraq since the fall of Saddam) and a peculiar, sometimes mesmerizing collection of short films about photography by Agnès Varda.

"Up and Down": Prague Spring, or Czech stalemate?
It's been 15 years since Václav Havel's Velvet Revolution, Czechoslovakia has split into two nations, and the harsh realities of capitalism have well and truly sunk in. That's one way to read Jan Hrebejk's powerful drama "Up and Down," which takes us from a seedy Prague pawnshop whose proprietors try to sell a baby on the black market to a frightening cult of proto-fascist soccer hooligans to a prodigiously uncomfortable family reunion in the lavish villa of a prominent professor.

Sony Classics is pushing "Up and Down" as a comedy, which I guess is fair in that the nameless baby (accidentally abandoned on a smuggler's truck by Indian immigrants) doesn't meet with a terrible fate, the semi-reformed hooligan (Jiri Machacek) whose deranged wife (Natasa Burger) buys the baby ultimately tells the authorities the truth, and the professor's embittered former wife (Emilia Vasaryova) and much younger current wife (Ingrid Timkova) avoid murdering each other. But the movie's really an elegantly interconnected portrait of Czech society, from its most respectable upper edges (Havel himself appears briefly) down to its criminal dregs, which imparts one lesson: Get out now.

The one character who has done so already is Martin (Petr Forman, son of the great Czech-American director Milos Forman), the son of ailing professor Otakar (Jan Triska). Various legends have spread around the family about Martin's overseas success, but he knows the truth and so does his father: His photography career never panned out, and he's running a surf shop in Brisbane, Australia. Nothing wrong with that, of course, and Hrebejk and screenwriter Petr Jarchovsky seem to suggest it's better than any of the alternatives on offer. Otakar is a strangled and melancholy figure, his ex-wife Vera is a paranoid and maudlin racist, and current wife Hana, despite her politically correct career as a refugee aid administrator, is a cauldron of repressed misanthropy and anger.

Everyone in "Up and Down" is wrestling with the fact that the Czech nation, for most of its history a source of emigration, is now a European Union member and as such a target for immigrants and refugees from all over the world. There is indeed some comedy here: Two low-rent thugs whom Martin accuses of lifting his wallet (they actually haven't) decide to vent their aggressions by mugging what they think is a Japanese tourist. Unfortunately for them, he's a Burmese refugee (brought in by Hana's agency) and a black-belt martial arts expert.

But even the comic flourishes are underlined with sadness. When his wife brings the Indian pawnshop baby home, soccer hooligan Franta is forced to break with his white-supremacist friends; he loves the baby, even though he knows it's not really theirs and they probably won't be able to keep it. He's a tremendously pathetic character, smart enough to know he's trapped but too dumb to do anything about it. By the time these subtly intertwined stories have wound up and Martin has gone back to Australia, Franta has returned to the hooligan fold and is working as a bouncer in a whorehouse -- where, at least, he gets to beat the crap out of one of the lowlifes who sold that baby in the first place.

"Up and Down" opens Feb. 25 in Los Angeles and New York, with more cities to follow.

"Turtles Can Fly": Love among the ruins -- also satellite TV
This is the latest extraordinary film from Bahman Ghobadi, the Kurdish-Iranian filmmaker who makes features in the treacherous borderlands of Iran, Iraq and Turkey, recruiting local people (especially children and teenagers) to play themselves, more or less. (His previous films include "A Time for Drunken Horses" and "Songs of My Motherland," which might be at your video store under the title "Marooned in Iraq.") These aren't documentaries -- they're scripted films with fictional plots -- but "Turtles Can Fly" will bring you closer to what it's actually like to live in an Iraqi refugee camp than anything you're likely to see on the news.

Fair warning: Ghobadi takes a dim view, reasonably enough, of both Saddam Hussein and the American war that unseated him. Although "Turtles Can Fly" is a lyrical, often lovely film with touches of humor, it's also a remorseless tragedy that doesn't offer its child protagonists any false redemption. Don't go to this expecting to see these kids get rescued by G.I. Joe and then stride off into a prosperous, well-nourished future.

Satellite (Soran Ebrahim) is the entrepreneurial wizard of this particular refugee camp, which is just inside Iraq on the Turkish border. As his moniker suggests, this bespectacled 13-year-old specializes in installing satellite dishes so villagers can watch the news on CNN -- not, of course, so that they can watch MTV, "Baywatch" and all the other lascivious content forbidden to good Muslims. He organizes teams of kids to clear minefields, which accounts for the numerous children with one arm or one leg (remember, these aren't actors and there are no special effects), or to collect empty artillery shells to sell as scrap.

Satellite nearly comes to blows, if that's the right word, with an older boy named Henkov (Hirsh Feyssal), who has no arms at all but challenges his authority. Realizing that Henkov's sister is the strange, long-faced beauty named Agrin (Avaz Latif) who has recently shown up in the camp, Satellite tries to make peace, but the newcomers remain silent and keep their distance. Meanwhile, Ghobadi begins to show us Agrin's terrible story too, which includes the fact that the cherubic 3-year-old traveling with her and Henkov isn't their younger brother.

It's the spring of 2003, and what both Fox News and Henkov foresee -- he has the gift of prophecy, or so it's said -- is that American troops will soon arrive and Saddam, scourge of the Kurds, will pass into history. But by the end of the film, when Satellite stands on the roadside watching the American tanks flow past (as far as I can tell, this footage is not fictional), there is no reason to celebrate. This unsinkable little capitalist has had his heart broken, and yours will be too.

"Turtles Can Fly" opens this week in Los Angeles and New York, March 4 in Philadelphia, March 18 in Houston, and April 1 in Chicago, Minneapolis and Washington, with other cities to follow.

"Cinévardaphoto": A lifetime of photography -- in a movie

I was too flattened by a dread virus to meet with Agnès Varda when she passed through New York this week, which was a real drag because A) she's a legend of French film who's now 76, and while I certainly hope she has 15 or 20 years ahead of her, we never really know, and B) she's a hoot. Someone I know who did talk to her said she broke off the interview after a few minutes and went and told the guy who was vacuuming the hotel lobby to come right over and vacuum right next to them, instead of being polite and keeping his distance.

Varda was in town to talk about "Cinévardaphoto," an anthology of three short films that remind us that she isn't just the director of "Cleo From 5 to 7" and "Vagabond" and "One Sings, the Other Doesn't" (and also the widow of the great Jacques Demy), she's also a lifelong photographer and photography enthusiast. The audience for "Cinévardaphoto" won't be huge, but for photo buffs and Varda fans, it's a can't-miss.

The first, newest and oddest film in "Cinévardaphoto" is "Ydessa, the Bears and Etc.," an exploration of the spooky, obsessive world of Canadian artist Ydessa Hendeles, who has accumulated the world's largest collection (I presume) of family photos that include teddy bears, along with many of the actual bears so depicted. The overcrowded exhibit she puts together at a Munich gallery is something of a shocker; let's just say that Hendeles' own past, as the child of Holocaust survivors, isn't irrelevant, and neither is the site, a building designed to hold the cultural treasures of the Third Reich.

Next comes "Ulysse," a film made in the early '80s that examines a photo Varda herself took almost 30 years earlier, of a man, a boy and a dead goat on a stony French beach. She tracks down the people depicted, propounds her own theories on the photo's symbolism, asks random children what they make of it, sums up the major news events of that month in 1954. As she would freely admit, none of this really explains anything, but it weaves the fabric of a passionate, introspective, meditative life out of a single inscrutable image.

Last comes "Salut les cubains," which depending on your perspective is an exercise in pure photographic form or in Commie nostalgia kitsch. Supporting the Cuban Revolution in 1963, when Varda assembled this film out of the photos she'd taken on a trip to Fidel Castro's island, was surely no crime -- it looked like a tropical, rumba-infused, far less dogmatic version of Marxism. Varda's photography is a pure joy, but rereleasing this film four decades later, absent any commentary on the ironic distance between then and now, is a typically challenging gesture. Is she still the radical-chic warrior she was then? Is she trying to confront Americans with our own hypocrisies? Whatever she's got in mind, Agnès Varda doesn't want us to be comfortable.

"Cinévardaphoto" opens this week at Film Forum in New York.