At the Conservative Political Action Conference, where rabid Bush-worshippers learn that liberals hate America and that we really did find WMD in Iraq. 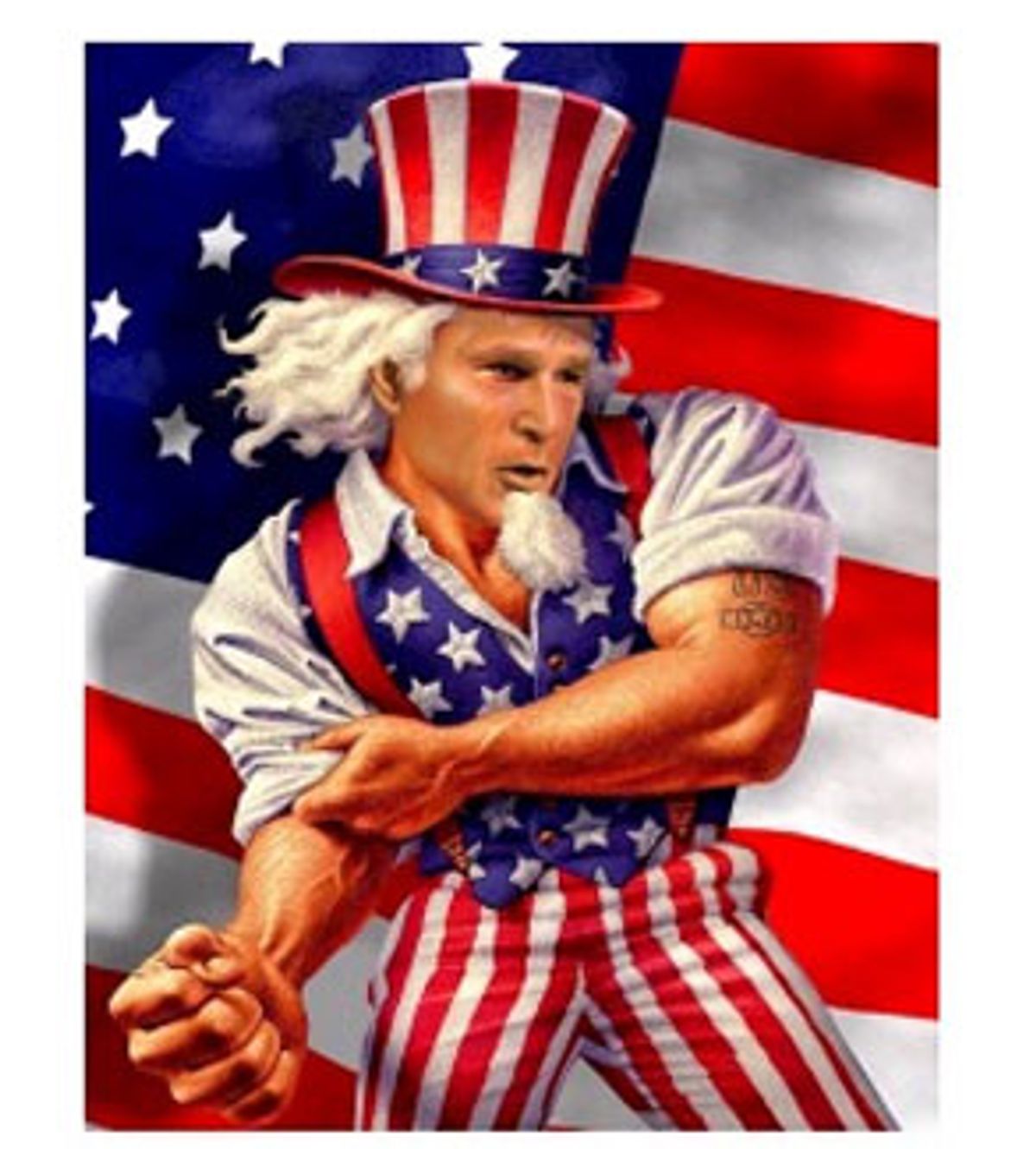 It's a good thing I went to the Conservative Political Action Conference this year. Otherwise I never would have known that, despite the findings of the authoritative David Kay report and every reputable media outlet on earth, the United States actually discovered weapons of mass destruction in Iraq, vindicating all of George W. Bush's pre-war predictions. The revelation came not from some crank at Free Republic or hustler from Talon News, but from a congressman surrounded by men from the highest echelons of American government. No wonder the attendees all seemed to believe him.

The crowd at CPAC's Thursday night banquet, held at D.C.'s Ronald Reagan Building, was full of right-wing stars. Among those seated at the long presidential table at the head of the room were Henry Hyde, chairman of the House International Relations Committee, Kansas Sen. Sam Brownback, Minnesota Sen. Norm Coleman, Dore Gold, foreign policy advisor to former Israeli Prime Minister Benjamin Netanyahu, and NRA president Kayne Robinson. Vice President Dick Cheney, a regular CPAC speaker, gave the keynote address. California Rep. Chris Cox had the honor of introducing him, and he took the opportunity to mock the Democrats whose hatred of America led them to get Iraq so horribly wrong.

"America's Operation Iraqi Freedom is still producing shock and awe, this time among the blame-America-first crowd," he crowed. Then he said, "We continue to discover biological and chemical weapons and facilities to make them inside Iraq." Apparently, most of the hundreds of people in attendance already knew about these remarkable, hitherto-unreported discoveries, because no one gasped at this startling revelation.

And why would they? Like comrades celebrating the success of Mao's Great Leap Forward, attendees at CPAC, the oldest and largest right-wing conference in the country, invest their leaders with the power to defy mere reality through force of insistent rhetoric. The triumphant recent election is all the proof they need that everything George W. Bush says is true. Sure, there's skepticism of the president's wonder-working power among some of the old movement hands -- including the leaders of the American Conservative Union, which puts CPAC on. For much of the rank and file, though, the thousands of blue-blazered students and local activists who come to CPAC each year to celebrate the völkisch virtues of nationalism, capitalism and heterosexuality, Bush is truth. They don rhinestone W brooches and buy mouse pads, posters and T-shirts showing the president as a kind of beefcake Uncle Sam, with flowing white hair and bulging muscles threatening to rend his red, white and blue garments.

It's not only liberals who have noticed that Bush's most committed followers are caught up in the fact-filtering force field of a personality cult. In January, Paul Craig Roberts, assistant secretary of the treasury during the Reagan administration and associate editor of the Wall Street Journal's far-right editorial page, published a damning column in the progressive Z Magazine about fascist tendencies in the conservative movement. "In the ranks of the new conservatives, however, I see and experience much hate. It comes to me in violently worded, ignorant and irrational emails from self-professed conservatives who literally worship George Bush," he wrote. "Even Christians have fallen into idolatry. There appears to be a large number of Americans who are prepared to kill anyone for George Bush  Like Brownshirts, the new conservatives take personally any criticism of their leader and his policies. To be a critic is to be an enemy."

This kind of ground-level devotion was key to the volunteer-driven get-out-the-vote campaign, and the administration sent important emissaries to convey the president's gratitude. Although the Republicans always have high-powered representatives at CPAC, this year the lineup at the three-day conference is particularly impressive. On the first day alone, attendees heard from Karl Rove and Sen. Rick Santorum as well as Cheney. Tonight, there will be a speech by Zell Miller, the former Democratic senator who delivered the vein-popping keynote address at this year's Republican National Convention. He'll be delivering a "Courage Under Fire" award to the Swift Boat Veterans for Truth. Tomorrow, we'll hear from Republican National Committee chair Ken Mehlman and Newt Gingrich.

Neither Cheney nor Rove said anything very interesting. As he does most years, the vice president essentially rehashed Bush's State of the Union, although he mercifully omitted any reference to the Federal Marriage Amendment. Rove's speech was about the growth of the right from "a small principled opposition" to "a broad and inclusive movement that is self-assured, confident and optimistic, and forward leading, and most important of all, dominant in American politics today."

Their mere presence was more significant than their words, putting the White House imprimatur on an event that featured, in addition to the Swift Boat Veterans, venomous CPAC regulars like Ann Coulter, Oliver North and Michelle "In Defense of Internment" Malkin. It was yet more evidence that this administration puts little distance between itself and the most reactionary forces in the Republican Party.

The people who come to CPAC range from very conservative to proto-fascist. Within that grouping, though, are a host of different concerns. Some of CPACers hate taxes and love guns but are basically social libertarians. Others, like the American Society for the Defense of Tradition, Family and Property, a far-right Catholic outfit, support the criminalization of homosexuality and oppose legalized birth control. A few have very specific grievances, like the man who stood after Santorum's talk to rant about judges who discriminate against fathers during custody disputes and women who won't let their ex-husbands see their children more than twice a month.

In his speech, Santorum tried to unite the various constituencies behind the anti-gay marriage amendment with the Orwellian argument that such an amendment is actually necessary to keep government out of people's private lives.

"I know there are some people who may be economic conservatives and not consider themselves cultural conservatives," he said. Addressing himself to them, he tried to explain how banning gay marriage is crucial to laissez-faire governing. "Think about those communities where marriage does not exist," he said, invoking their poverty and illegitimacy. "What you see is a model of what life would look like in a country that has fathers and mothers not wedded together in strong relationships to raise children." In poor neighborhoods, he said, there's a strong government presence, "because if Mom and Dad isn't there to raise the child, someone else has to bridge the gap, and that someone else is always the government."

Santorum didn't quite explain how proscribing gay unions would strengthen families in poor communities. The assumption seemed to be that homosexuality would make a travesty of matrimony. Like a suburban block where undesirables insist on moving in, its worth would go down. "If we deconstruct marriage in society, if we say marriage is whatever you want it to be, then marriage loses its intrinsic value," he said.

"I'm talking at a very protective level about what is important to our society if we are to be a free people," he said. "The less virtue we have in our society, the more the need for government to control our lives, to govern our lives." In other words, government needs to enforce virtue in order to keep government out of our lives.

This argument seemed to make sense to his audience.

Who needs logic when you've got power?