This German film about Hitler's last days is so powerful and compelling, you may actually find yourself feeling sorry for Der Fuhrer. 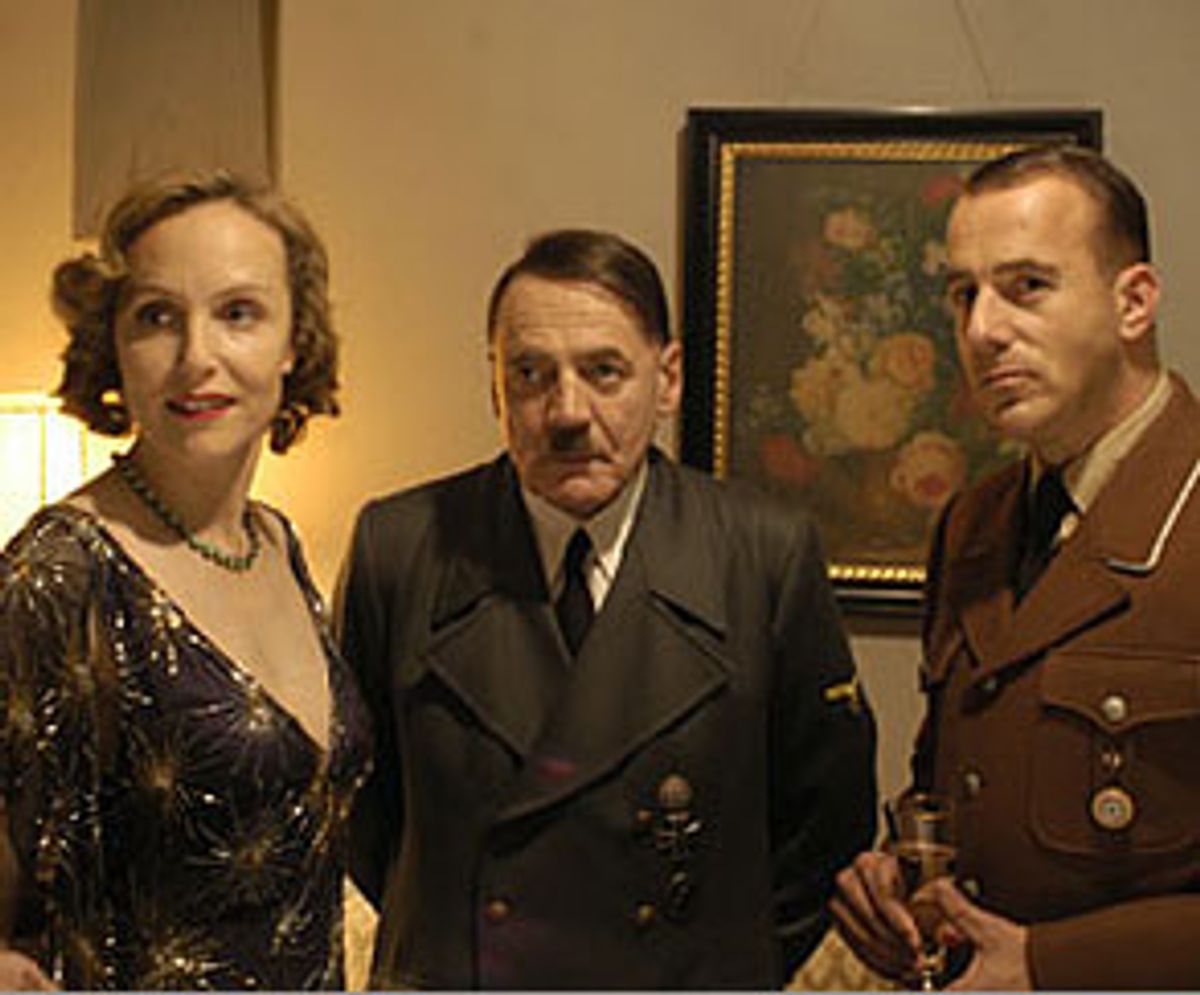 About two-thirds of the way through the momentous new German film "Downfall," there comes a moment when you realize how completely you have entered its world. It's a scene made infamous by newsreel footage: the last public appearance of Adolf Hitler, who emerges from his hideaway, blinking like a lizard, in the final days of the war to hand out medals to the "soldiers" defending Berlin from the Allies, most of them boys of around 11 to 14.

Most of "Downfall" takes place downstairs, in the legendary bunker beneath the Reich Chancellory in Berlin, where Der Führer spent his last weeks before taking his own life. A few days after that last photo op in the building's courtyard, Soviet troops would arrive there to find -- as the world would learn decades later -- the incinerated remains of Hitler and Eva Braun in a shallow pit. But on this occasion the Allied bombers and artilleries have taken a break, the courtyard is bright with spring sunlight, and the dictator is trying to fulfill his propaganda role. After what seems an eternity in that fluorescent-lit, steel-lined basement full of doomed and drunken Nazis, the scene feels like a picnic painted by Matisse.

As played by Bruno Ganz in a heart-stoppingly convincing performance, Hitler may be deranged, but he's no idiot. For all his bluster, he knows the end of the Thousand-Year Reich is very near; he emerges from the bunker as hunched and pallid as Quasimodo, his crippled left hand curled up and twitching behind his back. He tries to play the role of the cocksure demagogue who conquered Europe for these terrified boys who are facing death in his name, but he's really not up to it. He mumbles at them, grips their cheeks with his one almost-good hand, tells them he wishes his Wehrmacht generals -- who have been defeated on every front -- had half their courage. God help me, I felt sorry for him. Look at the poor guy, I was thinking. He's suffering so much.

Is that obscene? I suppose it is, but it's also the power of drama at work. Sure, Hitler was a monster, but in Ganz's portrayal -- the most compelling, and most wretched, Hitler I have ever seen or ever hope to -- he's a recognizably human one. As one friend of mine has suggested, self-pity is one of the greatest of human sins, and Hitler's prodigious self-pity motivated him to epic heights of megalomania. When we recognize him, in Ganz's shuffling, gray-jowled homunculus, as an especially pathetic example of our own species, when we forget for a second all our valid reasons for despising him and casting him out and instead look on him with compassion -- that is the triumph, albeit momentary, of art over history.

We need both art and history to make any sense of a phenomenon like Hitler, and don't think for a second that "Downfall," which is the first German feature film made about the Nazi regime in almost 40 years, tries to equivocate or make any apologies for the Third Reich. Based on the best-selling book by historian Joachim Fest ("Inside Hitler's Bunker"), which accumulates all that is known about the dictator's final days, as well as the memoir of Hitler's young secretary, Traudl Junge, the film compacts the story of all the regime's nightmarish madness into a portrayal of its last 12 days. Filmed on an extraordinary four-walled set that reconstructs the bunker as closely as possible, "Downfall" -- directed by Oliver Hirschbiegel from a script by Bernd Eichinger -- has a claustrophobic, pulse-accelerating realism that deliberately recalls Wolfgang Petersen's "Das Boot," still the greatest German-made film about World War II.

We can all make polite noises about how the Nazi disaster could have happened in some other country, but it isn't exactly true -- we know it and the Germans know it. Other nations and other people are certainly vulnerable to the allure of creeping totalitarianism (cough, cough), but the rise of Hitler and the Nazis was a distinctively German business, born out of the darker corners of that nation's historical and intellectual traditions. It probably takes Germans to confront it with both honesty and understanding, and one of the things that's most striking about "Downfall" is that you are convinced by it, so immediately and so totally.

In scene after scene, Ganz's Hitler rages at a map of the encircled Berlin: Where is the Ninth Army? The 12th Army? His generals are cowards! The German people have proven themselves unworthy! They deserve no compassion! He has been betrayed again! By Goering! By Himmler! By all of them! They must be shot! The generals around him stand paralyzed; they know the Ninth and 12th armies no longer exist, and Hitler probably knows it too, but any deviation from the fantasy script is unacceptable. Josef Goebbels (played by the truly unnerving Ulrich Matthes) stares at his master with religious devotion; his terrifying wife (Corinna Harfouch) prepares to murder their six children, rather than lose them to "a world without National Socialism."

Outside the door of the Führer's war room, things are a little different. Younger officers stand around, jumpy and anxious; shouldn't someone talk to Hitler about the obvious need to open surrender negotiations? Doesn't he want to spare Berliners from this awful destruction? (No; in fact, he welcomes it.) Others sit at a long table, drinking themselves insensible and discussing the best methods for committing suicide. Hitler himself would poison his beloved German shepherd, Blondi, before he killed himself. Did he hate to think of her becoming a Russian general's dog?

Eva Braun (Juliane Köhler) passes through the outer chambers like a hurricane of false hilarity, insisting on parties, jazz, cigarettes, schnapps. (Naturally, no one may refuse these good times.) Traudl Junge (Alexandra Maria Lara) sits smoking with another girl while Soviet shells burst overhead and the electric lights flicker on and off. Surely the Führer hasn't lied to them! Surely everything will still be all right! As Junge herself observed in the 2002 documentary "Hitler's Secretary" (a snippet of which appears at the end of this film) she didn't know about the Holocaust or the other brutalities of Hitler's regime at the time -- but she didn't know because she didn't want to know.

I suspect people, especially people in Germany, will still be watching "Downfall" in 40 or 50 years, looking for that fusion of art and history that makes sense out of senselessness. Hirschbiegel and Eichinger, along with their large, brave and talented cast, have done something extraordinary for their generation of Germans, and for the world. They have willfully entered their grandparents' dirtiest, clammiest chamber of secrets, that cellar where Adolf Hitler and his great German dream -- a dream that inspired millions, as hard as that is to imagine -- curled up to die. They have come back to tell us that, yes, this really happened; we know these people even if we don't want to; here's what it was like.