The president doesn't seem to realize it, but the Europeans still don't buy his neocon vision -- and they've backed him into a corner on Iran. 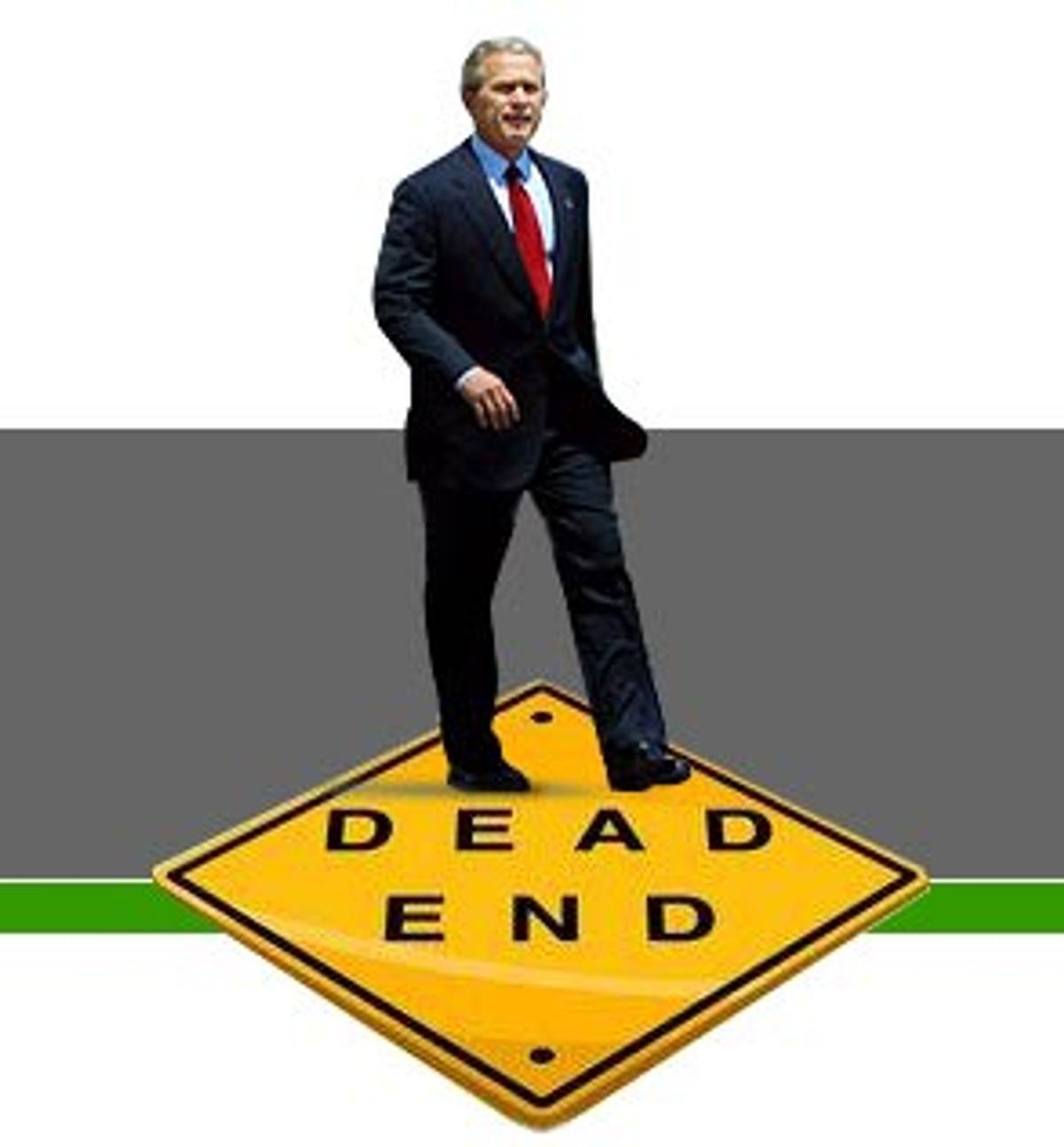 President Bush has reached a dead end in his foreign policy, but even though he has posed this quandary himself, he has failed to recognize it. His belief that the polite reception to him on his European trip is a vindication of his previous adventures is a vestige of fantasy. As the strains of Beethoven's "Pastoral" Sixth Symphony filled the Concert Noble in Brussels, Belgium, Bush behaved as though the mood music itself was a dramatically new phase in the transatlantic relationship. Bush gives no indication that he grasps the exhaustion of his policy -- reaching his reductio ad absurdum with his statement on Iran: "This notion that the United States is getting ready to attack Iran is simply ridiculous. And having said that, all options are on the table." Including, presumably, the "simply ridiculous."

The European reception was not an embrace of Bush's neoconservative worldview but an attempt to make it a thing of the past. New Europe is trying to compartmentalize old Bush. To the extent that Bush promises to be different, the Europeans encourage him with Champagne toasts; to the extent that he is the same, the Europeans, just for the moment, pretend it's not happening so as to nudge him. The Europeans, including the British government, feel privately that the past three years have been hijacked by Iraq. Facing the grinding, bloody and unending reality of Iraq doesn't mean accepting Bush's original premises but getting on with the task of stability at hand. For months before his visit, NATO countries, including France, have involved their police in training local Iraq security forces. Ceasing the finger-pointing is the basis for Europe's consensus on its new if not publicly articulated policy: the containment of Bush. It ought to go without saying that Bush misses the nuances and ambiguities.

Of course, Bush has already contained himself, or at least his preemption doctrine, which seems to have been good for one-time use only. None of the allies is willing to repeat the experience. Even if he wants to, Bush can't manage another such military show because the U.S. Army, pinned down in Iraq, is unavailable. The immediate problem of Iran, in any case, is in many ways the opposite of Iraq. (Iraq is also not the ideologue's Iraq now.) The Europeans have committed their credibility to negotiations, the Iranians have the diplomatic means to preclude unilateral U.S. action, and Bush, who, according to high-level European officials, has no actual policy or sense of what to do, is boxed in whether he understands it or not.

Secretary of State Condoleezza Rice, seeking to impress French intellectuals in her meeting with them in Paris, referred to Iran as "totalitarian," as if the authoritarian Shiite theocratic regime neatly fits the model of the Soviet Union. With this rhetorical legerdemain, she extended to Persia the already overstretched analogy of the "war on terrorism" as the equivalent of the Cold War. But her juggling of labels left her interlocutors dismayed by her lack of intellectual adeptness. One of the French told me Rice was "deaf to all argument" and spoke in a "Soviet style," but that no one engaged her gaffe because "good manners are back."

Regardless of Rice's wordplay, it is not a policy. Rice has vaguely threatened to refer Iran to the United Nations Security Council. The "simply ridiculous" remains on the table at the same time the United States is unengaged in the diplomacy. In short, Bush doesn't know what to do -- whether to join the Europeans to guarantee an agreement to prevent Iran from developing nuclear weapons, or not. Beyond playing bad cop, he seems unaware of his quite limited options.

"So long as Iran remains within the [nuclear] non-proliferation treaty and the [U.N. weapons] inspectors remain on the ground there, there's nothing the U.S. can do within the Security Council," John B. Ritch, the former U.S. ambassador to the U.N. International Atomic Energy Agency, explained to me. "If there is a suspect site, the IAEA inspectors can go there. If there isn't, where would a U.S. military strike occur?

"The argument for keeping the Iranians within the NPT is overwhelming. Once they are out, we lose any ability to monitor what they are doing. As long as they are in the inspection system, it gives us maximum opportunity to evaluate every step of their nuclear development and to develop an improved relationship the Iranians would not wish to jeopardize. The U.S. should be willing to support a European-brokered deal under which the Iranians forgo their right to build a domestic nuclear enrichment and processing capability. Ultimately, the way to promote a satisfactory outcome is to empower the Europeans by asserting that the U.S. will back up a sound agreement."

On his trip, Bush hummed a few bars of rapprochement. By their applause the Europeans began to angle him into a corner on Iran. In time Bush must either join the negotiations or regress to neoconservatism, which would wreck the European relationship for the rest of his presidency. If he chooses a course that is not "simply ridiculous," on his next visit the Europeans might be willing to play Beethoven's Third Symphony, the "Eroica."