"Diary of a Mad Black Woman" 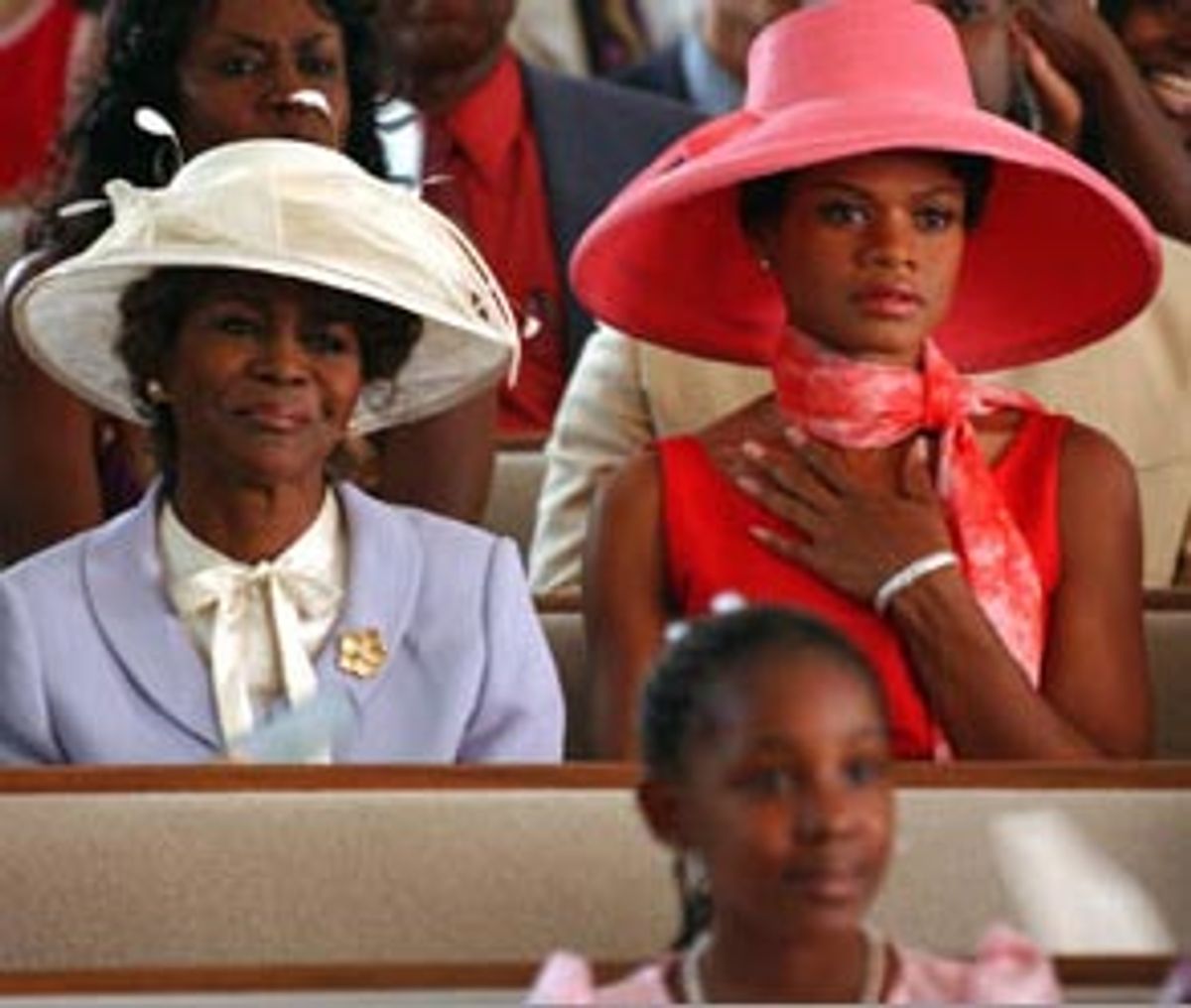 "Diary of a Mad Black Woman" is a movie whose existence, and whose significance in our social and political culture, you can't ignore. It's also the sort of movie that's so bad, you just wish it would go away.

"Diary" was written by Tyler Perry, the enormously successful playwright -- you could almost call him a playwright-entrepreneur -- who attracts a large African-American audience with his plays about relationships and emotional growth layered with broad religious overtones. In "Diary," Kimberly Elise plays Helen, who for 19 years has been a good, dutiful wife to rich, successful lawyer Charles (Steve Harris). But he treats her cruelly, and even throws her out of the home they share so he can install his mistress and two illegitimate kids.

Helen flees to the house of her grandmother, Madea (Perry himself, in "Nutty Professor"-style drag), a gun-totin', tough-talkin' granny nobody dares to mess with. Helen rebuilds her life, exacts revenge on her husband and, ultimately, learns the importance of forgiveness. There's also a lively church scene in which the lame walk, and an ex-junkie shows up, cleaned up and wearing a pretty dress, to sing the praises of the Almighty in the aisles.

This is the first movie made from original Perry material, and it's clearly meant to be a crowd-pleasing, uplifting dramatic entertainment. Perry doesn't have any delusions of artistry, and potentially, at least, that's refreshing. But any points he earns for lack of pretense are immediately gobbled up by his lack of subtlety.

Everything in "Diary of a Mad Black Woman" is exaggerated for the audience's pleasure, resulting only in its exhaustion. "Get the hell outta my car," Charles barks at Helen, dropping her off at their lavish home after the two have attended a swanky dinner in his honor, during which he's been the very picture of an angelic husband. Later, when he kicks her out of the house, clothes and all (having already moved the brand-new wardrobe of his mistress into his wife's huge walk-in closets), he snarls, "Now be a lady and leave quietly." These are all cues for the audience -- and there's no doubt "Diary" is aimed chiefly at women -- to boo and hiss and acknowledge that, damn, this is one really bad guy. We need only one or two of these cues, but Perry lays them on thick.

Then the sermonizing begins. When Helen, who has been cut off from her family for years, on Charles' orders, runs into her shivering, twitching junkie cousin, she asks Madea, "What happened to her?" The answer, intoned with great gravity: "Life." And it takes Helen forever to recognize that she's not to blame for the failure of her marriage. Long past the point where guilt would be an issue (and past the point where the audience expects it to be an issue), she's still reciting embroidered samplerisms like "I always thought that if I did the best I could, God would bless my marriage."

This is director Darren Grant's first feature, and it has a naive, amateurish feel -- that kind of first-picture awkwardness can sometimes be charming and energizing, but here it just feels hokey. (It's worth noting, though, that cinematographer David Claessen gives the picture a polished, professional look, and he captures Elise's effervescence beautifully.) "Diary" is intentionally broad -- by design, it's supposed to incite the audience to yell and whoop at the screen -- but it mushrooms into pure ridiculousness and still expects us to treat it seriously. Hardest to take is the way some very fine actors, among them Elise ("Beloved," "The Manchurian Candidate"), Harris (best known for "The Practice") and the great, little-seen Cicely Tyson (whose performance in "Sounder," more than 30 years ago, is the kind you never forget in a lifetime) are forced to plow through the movie's viscous religiosity, as opposed to just playing ordinary people in tough circumstances -- which is plenty for any actor to handle right there.

But as lousy as it is, "Diary of a Mad Black Woman" is weirdly fascinating. From a political standpoint, most secular white liberals don't like to think much about what religion means in black communities (or in white ones, for that matter). After last November, in particular, religion, or at least those nebulous wraiths known as "religious beliefs," became the great bugaboo of most of us on the left: We like our church and state very cleanly divided, for obvious reasons.

But churches aren't strictly religious organs -- they're communities, too, and although "Diary of a Mad Black Woman" overdoes its "Jesus is the answer" message, it does capture a sense of the cultural and moral conservatism (if not political conservatism) that these communities cling to. That conservatism is a fact of life in our country, and while some of us may not like it, denying its existence gets us nowhere.

"Diary of a Mad Black Woman" shows that conservatism in full force. But if Perry knows what his audience wants, and gives it to them in buckets, he at least has a sense of humor about it. In the guise of his character Madea (her name, incidentally, is an endearment truncated from "My dear" -- not a play on "Medea"), he delivers some sly zingers about the dangers of blind reliance on Scripture. At one point Madea (who has pendulous breasts and gray grandma hair and is very fond of the handgun she keeps in her handbag, which she brandishes gleefully with little prompting) launches into a tirade about how she tried to read the Bible once and had to put it down, because "Jesus talks too much."

As Madea, Perry is often hilarious (particularly in a scene where she and Helen wreak revenge on Charles by sawing every piece of furniture in his living room in half -- it may be broad, but it works). But Perry's sense of humor doesn't surface as often as it needs to. When Helen meets a nice new guy (Shemar Moore) and finds herself sexually attracted to him, she writes in her diary how lucky she is to have found a man who's "strong, beautiful, sensitive and Christian" -- this, after noting "Dear Diary, This man is FINE." We can't just take pleasure in the fact that Helen has found a nice guy who turns her on -- his attributes need to be spelled out for us in a dry laundry list.