Bush's huge gamble on dismantling the cornerstone of the New Deal will fail. And if the Democrats remain disciplined, his defeat will be profound. 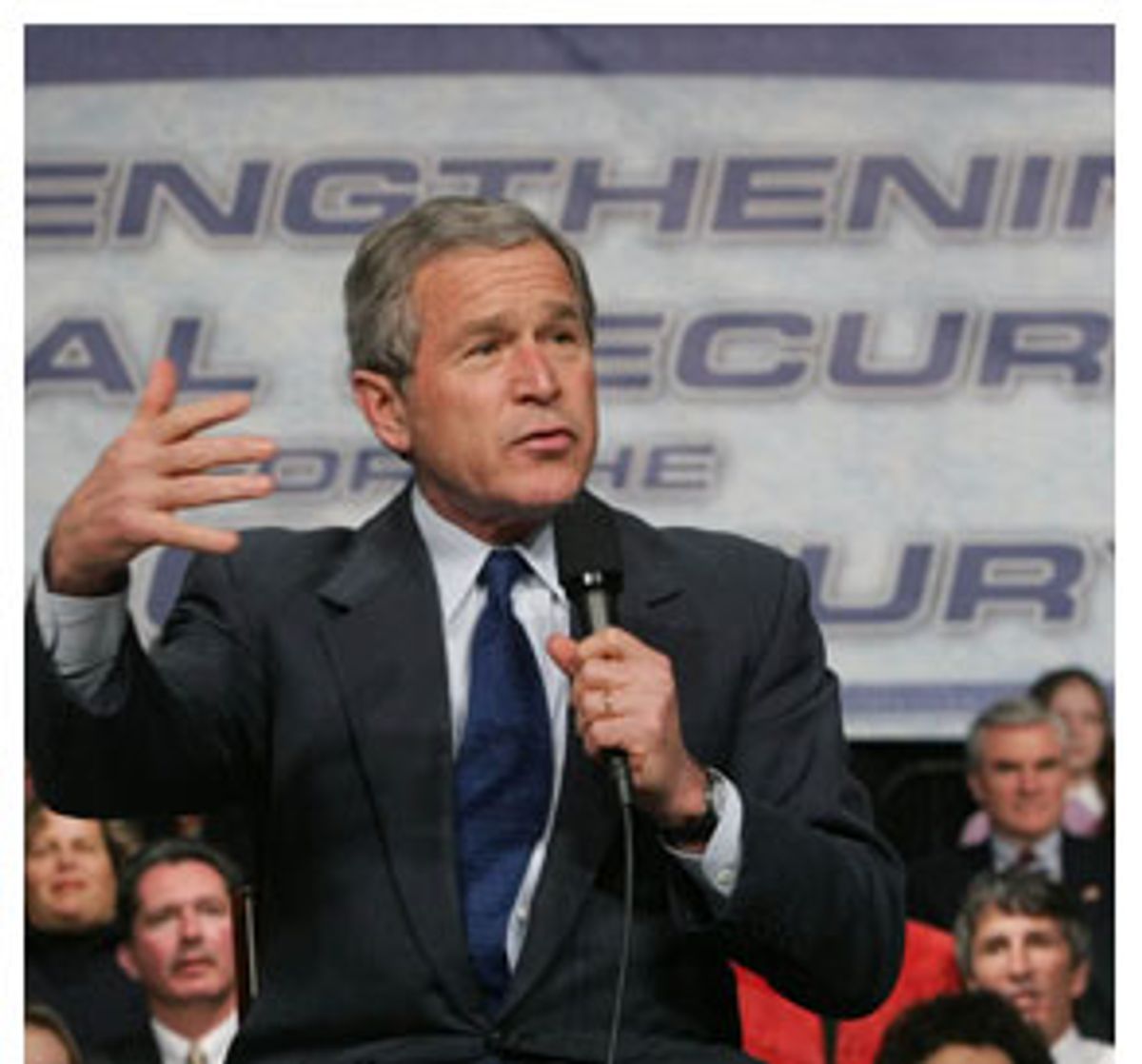 The coming defeat of President Bush on Social Security will be the defining moment in domestic policy and politics for his second term and for the future of the Republican Party. It will be a central, clarifying event because Bush alone chose to make this fight.

Campaigning in 2004 on the trauma of Sept. 11, he won by the smallest margin of any incumbent president in American history. The Electoral College map was little changed from the deadlock of 2000. While Bush barely took two states he had lost before (Iowa and New Mexico), he lost one to John Kerry -- New Hampshire. Bush's political advisor, Karl Rove, had forecast a fundamental realignment that would establish Republican dominance, but Bush's desperate political position required a series of tactics of character assassination against the Democratic candidate and culture war gambits on gay marriage, atmospherically organized around the fear factor of Sept. 11. The outcome was a strategic victory but not a structural one, and Bush's campaign further polarized the country.

In the chasm between his meager win and his grandiose ambition, Bush might have decided to form a government containing some moderate Republican and Democratic Cabinet members, claiming that the gravity of foreign crisis demanded national unity. But the thought never occurred to him. Instead, he bulled ahead in the hope of realizing the realignment that eluded him in the election.

Not since 1928, when Herbert Hoover was elected in a landslide, have the Republicans held the White House and such majorities in both the House of Representatives and the Senate. Bush acts with the urgency of a president for whom this political advantage must be seized now or lost forever. So he has decided to swing a sledgehammer at the cornerstone of the New Deal and the Democratic Party. The gamble would pay off in closely tying to the Republican Party the Wall Street banks that would finance the transition costs of privatization and the bond houses and stock firms that would be flush with new investments. But, most important, it would unravel the fact and idea of government insurance programs providing for the needs of the people as a whole. Once Social Security was cut into pieces, the Democrats would be left defensively representing the least politically powerful and most vulnerable -- literally the lame and the halt, the poor single mothers ("welfare queens") and minorities. The Democrats would be drawn and quartered on the wheel of broken entitlements.

Bush launched his initiative to privatize Social Security with a bang, promoting it in his State of the Union address and stumping the country at rallies. Rove has been put in charge of organizing the campaign as an extension of the 2004 effort. From the White House, Rove directs the lobbyists of K Street in Washington and the U.S. Chamber of Commerce, the National Rifle Association and the religious right. Suddenly, the Swift Boat Veterans for Truth have reappeared as warriors against the pro-Social Security AARP, smearing the seniors organization as anti-military and pro-gay marriage. And Tony Feather, a Republican consultant with longtime ties to Rove, has reemerged with a war chest of millions to spend through a front group called Progress for America, just as he did against Kerry.

Even the Social Security Administration has been inducted in the campaign. Five years ago, it sent out a routine annual booklet titled "The Future of Social Security": "Will Social Security be there for you? Absolutely." Now a new booklet has been mailed to tens of millions warning: "Social Security must change to meet future challenges." And it suggests that Social Security should not be regarded as a "foundation on which to build your financial future."

And yet the more the public has learned of Bush's plan, the more it has buckled. Poll after poll reveals that increased information leads to heightened resistance. Growing majorities oppose Bush's program, Bush's favorability rating has plunged to the lowest level of any president at this point in his second term, and trust in the Democrats has steadily risen.

In the face of public rejection, Bush retreats and attacks at the same time. He has announced that he is uncertain when or even if he will propose his own bill before Congress, while the White House says that the president will stage new rallies for the Social Security initiative that has yet to take any practical form.

Republican leaders have become studies in hesitation and anxiety. Senate Majority Leader Bill Frist declares that the "pacing" should be "determined by the American people." In a statement as fuzzy as he could manage, he explained, "In terms of whether it will be a week, a month, six months or a year as to when we bring something to the floor, it's just too early."

House Majority Leader Tom DeLay, rhetorically echoing Saddam Hussein ("mother of all battles"), called Social Security the "mother of all issues." He added, "And it is going to take a lot of dialogue with the American people." When Tom "the Hammer" DeLay, who hangs a whip on his wall, pleads for understanding, the problem must be that the American people understand too much already.

For Bush and the Republicans, the problem is salesmanship. If only they hone the pitch, convince the wary customers that they really mean well, saving them from a bad investment and delivering a bargain, they will clinch the deal. Frank Luntz, a Republican consultant who has made a specialty out of wordplay, has advised them on how to make friends and influence people. In a memo circulated among the Republican leadership last month, he urged that Republicans appeal to emotions, not facts. The public, Luntz writes, wants "empathy rather than statistical declarations ... It is tempting to counter-attack using facts and figures. Resist the temptation." He reemphasizes: Social Security "is a difficult subject because there are many obscure facts and figures. Stay away from them!!!" No fewer than three exclamation points!!!

Republicans, says Luntz, should never use the word "privatized." They should substitute "personalized." "And PLEASE remember that you are NEVER talking about privatizing Social Security, nor are you advocating INDIVIDUAL accounts. You are talking about creating PERSONAL retirement accounts." Republicans should also talk about "personalized accounts" as being about "the future," he says, and remind people that "Social Security was built for a different America."

When all else fails, Republicans should simply resort to the fear factor: "September 11th changed everything. So start with September 11th. This is the context that explains and justifies why we have $500 billion deficits, why the stock market tanked, why unemployment climbed to 6 percent ... Without the context of September 11th you will be blamed for the deficit ... Link the war on terror to the economy."

"Society has an obligation to promote the security of the people, by affording some measure of protection against involuntary unemployment and dependency in old age. The New Deal policies, while purporting to provide social security, have, in fact, endangered it." The 1936 Republican platform claims that the federal government will not be able to meet its financial obligations to pay retirement benefits and two-thirds of the people will be deprived. It also insists that "the fund will contain nothing but the government's promise to pay" and is "unworkable."

The Republican candidate for president against Franklin D. Roosevelt that year, Alf Landon, governor of Kansas, was the first to run on "reforming" Social Security, which he dubbed a "hoax." Roosevelt's victory seemingly settled the question of Social Security and the basic programs of the New Deal. In every election afterward, the GOP split internally between conservatives, who rallied behind their standard-bearer, Sen. Robert Taft, and those who called themselves modern Republicans. When Dwight Eisenhower defeated the eternally disappointed Taft for the 1952 nomination, the conservatives crawled to a corner, embittered and despairing. Conservatives were convinced that overthrowing the New Deal must be accomplished through a long march through the Republican Party, also overthrowing modern Republicanism.

At last, in 1964, the conservatives grabbed the Republican nomination, and their candidate, Barry Goldwater, thrilled them by declaring his opposition to Social Security. Goldwater advocated privatization to deal with what he claimed was the system's crisis: "It promises more benefits to more people than the incomes collected will provide," he said.

In the closing days of the 1964 campaign, as Goldwater faced overwhelming defeat, his campaign purchased television time to broadcast a speech by a Goldwater supporter who was felt to be a more convincing salesman than the candidate -- Ronald Reagan. Reagan's speech was his debut on the national stage and the effective launch of his political career. The image remains; the words are mostly forgotten.

In fact, much of his talk was devoted to making the well-worn case against Social Security. It faced "fiscal shortcomings." It was not "insurance" but really a "welfare program." It was deeply in debt. Young workers could "take out a policy that would pay more than Social Security. Now are we so lacking in business sense that we can't put this program on a sound basis, so that people who do require those payments will find they can get them when they're due -- that the cupboard isn't bare? ... Can't we introduce voluntary features?" To conclude his argument, Reagan warned that a medical program in France was bankrupt and that this fate would befall Social Security. "They've come to the end of the road."

But when Reagan became president he jettisoned his denunciation of Social Security. In 1983, he signed a bipartisan tax and benefits bill extending its solvency until 2060. The ultimate conservative had used anti-Social Security rhetoric to galvanize his conservative base to gain office, but as president he joined his Republican predecessors in supporting the system. With that, he took the issue off the table for years. In 1996, Sen. Bob Dole never mentioned a word against Social Security, proud of having been a co-sponsor of the 1983 bill Reagan had signed.

Now, George W. Bush has sought what Ronald Reagan would not. Only Bush as president has attempted to make good on the reactionary rhetoric against Social Security since its inception. He has tried to dress up his effort as a "reform," as a "new idea," but the language, upon historical examination, turns out to be recycled from the 1936 Republican platform, the Landon and Goldwater campaigns, and words that Reagan discarded as president.

Bush's impending defeat on Social Security is no minor affair. He has made this the centerpiece of domestic policy of his second term. It is the decades-long culmination of the conservative wing's hostility against Social Security and the Democratic Party. Projecting images of Roosevelt and Kennedy cannot distract from Bush's intent to undermine the accomplishments of Democratic presidents. The repudiation of Bush on Social Security will be fundamental and profound and will shake the foundations of conservative Republicanism. Bush's agony is only beginning, if the Democrats in the Senate can maintain their discipline