Thurman, Travolta and the rest of the star-studded cast do indeed look cool. But where's the heat? 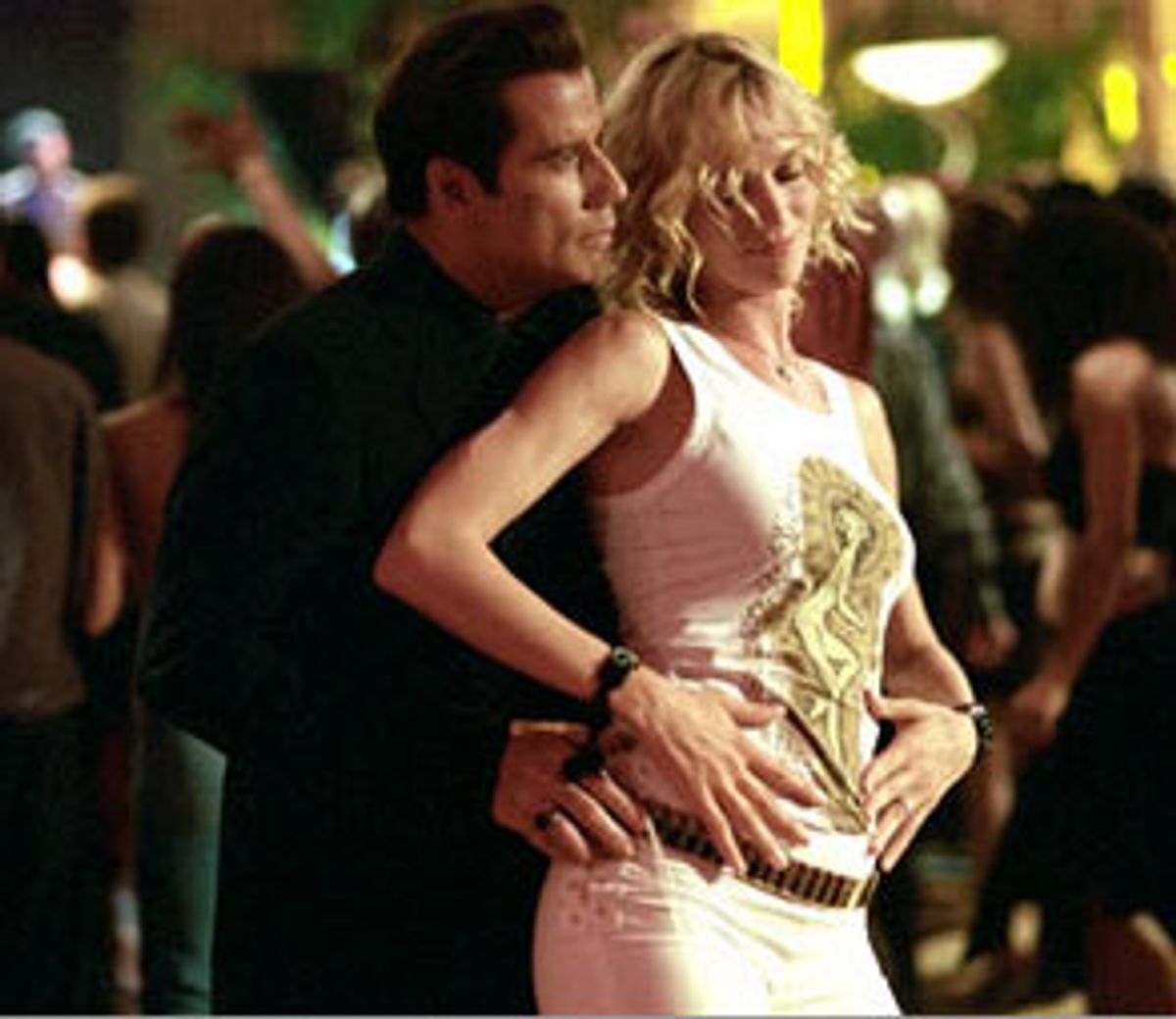 The cover of the press kit for "Be Cool" features a full-length shot of John Travolta and Uma Thurman on a steamy-looking dance floor. Both face the camera, their arms entwined and their eyes closed, lost in music we can almost hear, the vision of their sultry delight is so vivid. It's a great photograph, and it's everything you want out of "Be Cool" -- and don't get.

F. Gary Gray's "Be Cool," based on Elmore Leonard's novel, is the sequel to Barry Sonnenfeld's mischievously entertaining 1995 "Get Shorty," in which we met Chili Palmer (John Travolta), a mobster who heads out to Hollywood to collect a debt and ends up becoming a hotshot producer. As "Be Cool" opens, Chili wants out of the movie business, and he serendipitously finds himself in the music business instead: He takes young singer Linda Moon (Christina Milian) under his wing, freeing her, unofficially and wholly illegally, from greedy impresario Nick Carr (Harvey Keitel) and an onerous contract. Chili happens to have a friend, the recently widowed Edie Athens (Uma Thurman), who runs an indie record label. The two of them, realizing Moon could be the next big thing, begin engineering her career, undaunted by Russian mobsters, a rap producer's bullying entourage, and Carr's sleazy underhandedness.

It's not always clear what's going on in "Be Cool" (the screenplay was adapted by Peter Steinfeld), although that doesn't necessarily matter. But the movie feels more like a cavalcade of personalities than anything resembling a story. Vince Vaughn, Danny DeVito, Cedric the Entertainer, James Woods: These are the actors who get spun through the picture's revolving door, some of them showing up only for a scene or two just to remind us that they exist. Even Aerosmith's Steven Tyler -- who has, alarmingly, grown to resemble Joan Rivers -- takes a bow. The Rock shows up as a bodyguard who's desperate to become an actor, and he's extraordinarily charming (as well as incredible to look at -- his complexion is so smooth, it looks as if it's been airbrushed). But because his character is gay, he's saddled with a bunch of dumb fag jokes; they're not particularly offensive, but they feel parched and stale. Andre Benjamin -- also known as Andre 3000, of OutKast -- has a lively bit as a gun-happy member of hip-hop producer Cedric the Entertainer's posse. He's expressive and funny, and I wish he'd had more to do. "Be Cool" is so wedged so tight with personalities (as opposed to full-fledged characters) that he just seems shoehorned in.

There's barely any room in the "Be Cool" sardine can for the two people we came to see: Thurman and Travolta, whose chemistry was so delectable in "Pulp Fiction." The two strike an easy rapport here -- their flirtations are pleasant and wispy, as if hinting at a fine display of private fireworks later. But the scene on the dance floor (the band onstage is Black Eyed Peas, with Sergio Mendes -- ! -- on keyboards) is shot and cut so that we only get glimpses of the way their bodies move together. It leaves us feeling duped and unsatisfied. Travolta's performance is perfectly laid back and understated, but somehow, even though he's the lead character, he doesn't really leave his mark on the film. And while Thurman looks wonderful -- her willowy but robust frame is draped in sunny Missoni colors and silky rock-star scarves -- she throws off just a small fraction of the charisma she had in "Kill Bill, Vol. 2." Here she's playing a type (the hard-nosed businesswoman who's coquettish in a blasé way), which should be fun and freeing. But although she's pretty to look at, Thurman's character doesn't have enough body to stick with you -- she just shimmies off the screen.

Gray, who made the smart, energetic 2003 "Italian Job," is an intelligent and canny director, and even the things that are wrong with "Be Cool" suggest that he's looking for original ways to make these sorts of mobster-comedy pictures. "Be Cool" isn't assaultive or dumb, just slack and de-energized, as if its batteries start running down in the first frame. Gray does pull off a few good laughs here, most notably in some sight gags involving a gangster's ratty toupee. "Be Cool" isn't a travesty, but it would be a vastly better picture if only a few of its screws were tightened, and if some of its extraneous personalities had been downplayed or stripped away. Chili and Edie are good characters, and it's easy enough for us to imagine them off on a road trip somewhere, having a great time. If only they could be having it on-screen.