She's a cutthroat, greedy, boorish mogul who became a zillionaire by peddling a luxury lifestyle fantasy. She got off easy. 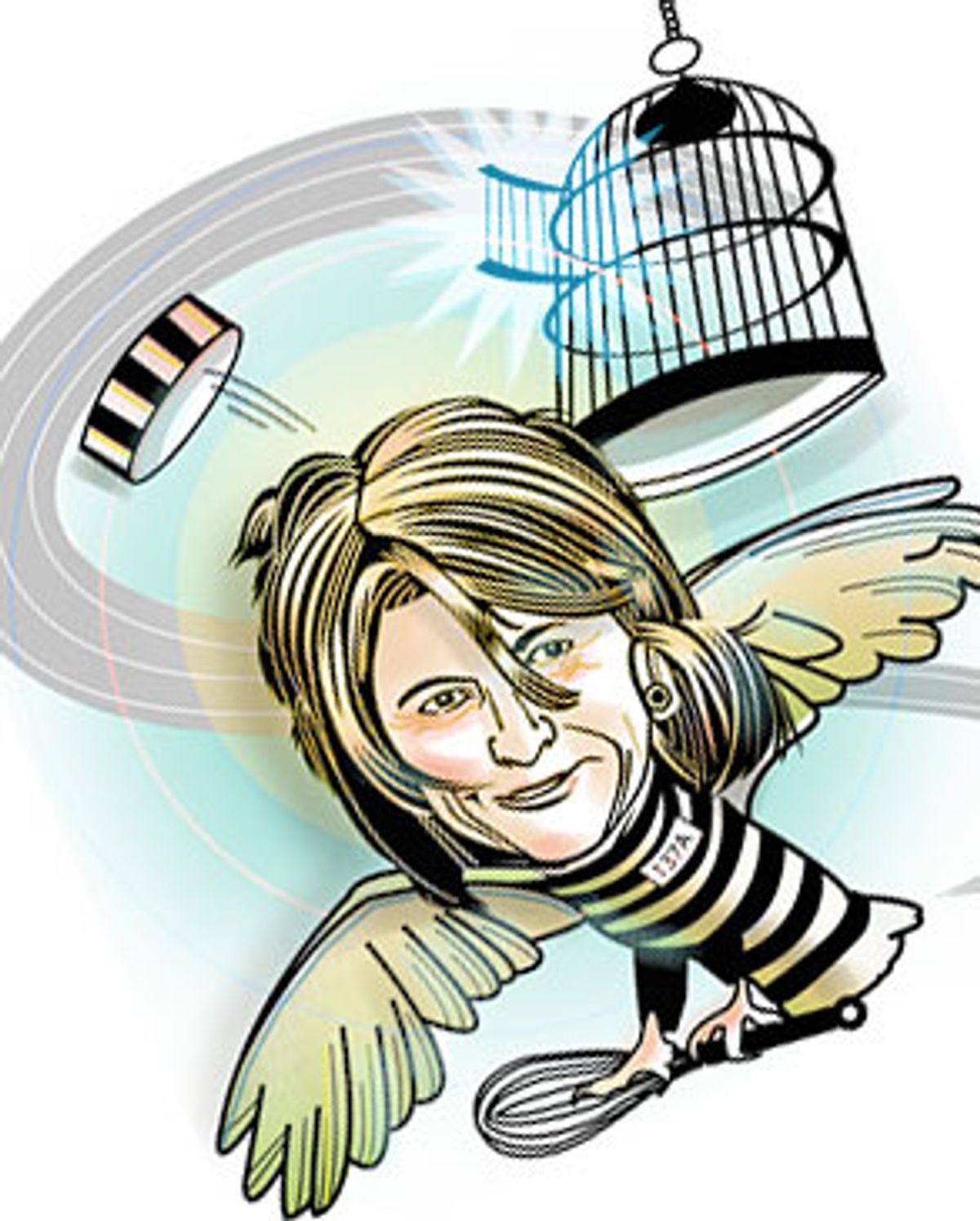 Martha Stewart is back among the living, with two TV shows on the way, and the welcome mat brushed clean at her New York headquarters, proving once again that she was always in control, even when behind bars. It won't be long before she will be doling out homemaking wisdom to her millions of fans, unruffled in trademark fashion, as if this latest setback was nothing more than a typical home-and-garden misfortune, like gophers in the daffodil beds.

And for this, we are supposed to be grateful, admiring even. Because all true Martha fans know that she was made an example of. She was a strong woman who gave money to Democratic politicians, and thus she had to be taken down. What she did, we are told, wasn't so bad, certainly nothing compared to the Ken Lays and Bernie Ebbers of the world. So she may have obstructed justice a little, and quite possibly engaged in a bit of insider trading. Big deal! You gotta break some eggs if you want to make a stir-fried lobster omelet, right? No one ever said becoming a billionaire while offering rose napkin folding tips was going to be easy!

Piffle. Martha's slap on the wrist -- the minimum sentence she could possibly receive, given the crime she was convicted of committing -- was the least she deserved, if not for this incident, then for her lifelong record as a ruthless businesswoman. Martha's climb to power and glory came on the back of betrayed friendships, bullied and abused employees, and unrestrained egomania. And all in the service of what? Selling a luxury lifestyle fantasy that few real working women -- or men -- could ever achieve, without unlimited credit at Home Depot and a bevy of maids and gardeners.

And now, here she comes again, likely to be bigger than ever, soon to star in her own version of "The Apprentice" in the kind of second-act triumph that America loves so well. But maybe we'd all be better off with her in the clink for just a little bit longer, along with Lay and Ebbers, and while we're at it, Donald Trump too. Isn't it far past time to knock all of these titans of industry off their pedestals, all these pop cultural heroes whose main claim to fame is they were simply more successful at being greedy bastards than 99 percent of the rest of the world?

Anyone who is feeling all warm and fuzzy about the return of this queen would do well to revisit the pages of Chrisopher Byron's brutally entertaining biography "Martha Inc." There, one can munch on such tasty hors d'oeuvres as the tidbit that, as a young stockbroker in the early '70s, Martha pushed doubtful stocks on her friends and clients even as the market was imploding all around her. Or how she tricked Kmart into essentially picking up the tab for a house that she had already purchased. Or the myriad accounts of her bullying employees, abusing service people, and otherwise letting her prima donna freak flag fly. For some really fun reading, try the deposition from the landscaper who says Stewart tried to crush him with her Suburban.

This is not to say that Martha is any more evil or manipulative or boorish than any other relentless titan of industry. There is something to celebrate, I suppose, in her Maggie Thatcher-ness, her definitive demonstration that women can be just as badass as men. Thatcher invaded the Falklands, Stewart humbled Time-Warner. Great! Just the kind of role model I'm looking for for my own daughter. You see, dear, it's a cutthroat, ruthless, kill-or-be-killed world out there, but if Martha can do it, so can you!

It's a measure of the screwed-up standards for what passes for success in this country that the standout quality of our business superstars tends to be that they are more conniving and manipulative than anyone else. So Bill Gates pulls a fast one on IBM, convincing the company to license Microsoft's operating system for their PCs, and Gates becomes a hero. And Martha pulls the wool over the eyes of Kmart, essentially convincing a company in a death spiral to pay her far more than she is worth, and thus subsidize all her other endeavors. Is this really worth our applause?

Byron says it thus: "In many ways, creating and marketing the image of Martha Stewart has turned the real-life person behind it into the embodiment of all that seems least admirable in the world of big business and the ruthless men who run it. In the celebration of the American woman at her finest, Martha Stewart became the American businessman at his worst."

That hits pretty close to the mark, except ... is Martha really celebrating the American woman at her finest? Given Martha's undeniable popularity, it is foolish to deny that she touches a chord deep in the heart of American womanhood. And heck, who doesn't appreciate a well-turned antique fixture, or the details of how to throw a cocktail party for 250? I confess, I would feel inordinately proud if I could make my own rope-seat stool or get my act together to use cranberries as a flower frog. But I don't find much to celebrate in the vision of the kind of woman who could actually live up to the standards set by the iconography of Martha Stewart Living: the well-off housewife with a landed estate, four pairs of gardening gloves, and the time to spend endlessly refinishing sideboards. Martha may have given a lot of money to Democrats, but the world described in her magazines and books and TV shows looks like one that is accessible only to a tiny few.

It's a fascinating illusion. Byron writes that Martha's first Thanksgiving TV special featured guests who pretended to be friends and weren't allowed to eat the food that was placed in front of them. Her first book, "Entertaining," was ghost-written -- but the writer got no credit. Her years of television are rife with stories of her arriving on set with no idea of what she was supposed to be doing, and getting more and more enraged as scenes had to be reshot while she figured it out. She was just too busy being a mogul to be a homemaker.

Maybe it's not fair to criticize Martha for the growing distance between what she actually does in her daily life and the branded image that her empire pushes. Maybe that's the price every mogul pays -- Bill Gates doesn't get to spend much time coding these days, either. And I'll grant there is a counter-argument, one that says that Martha Stewart's taste and style and appreciation for fine craftmanship, fine ingredients, and quality materials has swept an ocean of schlock into darkness. But when I leaf through her magazine, or surf her Web site, or page through her books, or catch her on TV, I don't see anything that isn't on a score of other shows, or books, or magazines -- outside of her own transcendent Martha-ness, which says, yes, you can have it all, your beautiful home and your IPO too. If you are willing to work really hard, stomp on everyone around you, and always remember to sell early.