The empire strikes back

John Bolton, a man who doesn't believe in diplomacy and thinks the U.S. should be the only permanent member of the U.N. Security Council, gets yet another chance to wield his stick. 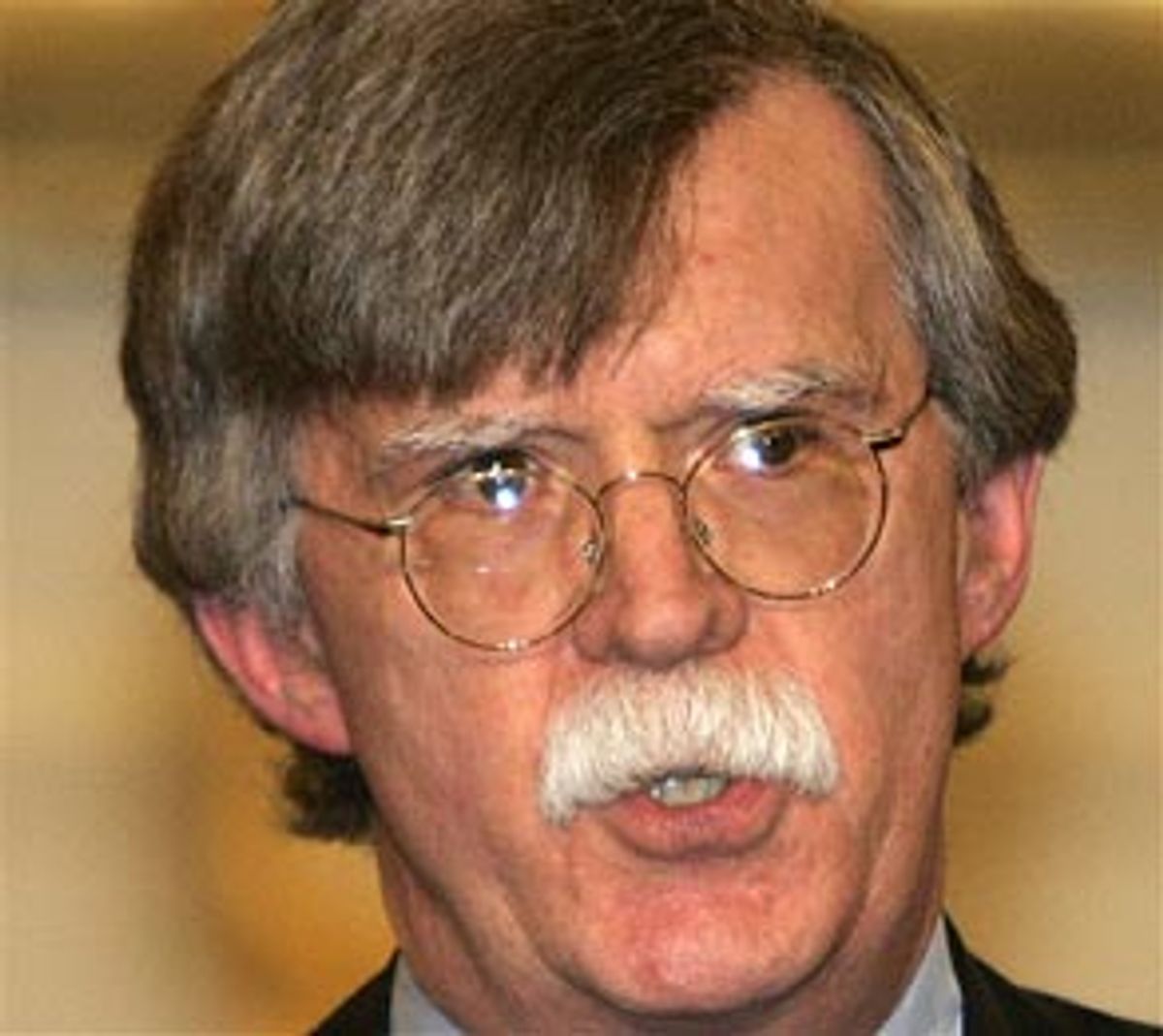 In the heat of battle over the 2000 Florida vote, which would decide who would be president, a burly, mustachioed man burst into the room where the ballots for Miami-Dade County were being tabulated like John Wayne barging into a saloon for a shootout. "I'm with the Bush-Cheney team, and I'm here to stop the count," drawled John Bolton. And those ballots from Miami-Dade were not counted. Dick Cheney beamed that Bolton's job should be "anything he wants."

Now Bolton, who as undersecretary of state for arms control has wrecked all the nonproliferation diplomacy within his reach and alienated every nation he has dealt with, who openly disdains multilateral efforts and international organizations, and who has been the single most dedicated person over two decades of attempts to discredit the United Nations, has been named by President Bush as the U.S. ambassador to the U.N. "If I were redoing the Security Council today, I'd have one permanent member because that's the real reflection of the distribution of power in the world," Bolton has said. And: "There is no such thing as the United Nations." Orwell's clock of "1984" is striking 13.

The euphoria from Bush's European trip -- the feeling that it marked a conversion on the road to Brussels, Belgium -- should quicken the half-life of its fading. For it was Bush who decided that Bolton would be rewarded with a position to continue his crusade as a "convinced Americanist" against the "globalists," especially those at the United Nations and in the European Union, which he has labeled "the leading source of substantive globalist policy."

Bolton made a play to become deputy secretary of state after the 2004 election, but was blocked by Condoleezza Rice, who understood that his prowess at bureaucratic infighting would have constantly undermined her authority. For four years, Bolton had waged a war against Colin Powell. Rice had participated enough in those underhanded campaigns to know she didn't want Bolton plotting against her from within. Cheney privately promised Bolton that if all else failed he would give him a job on his vice presidential staff, but that proved unnecessary when Bush nominated him to the U.N. post. Rice announced his appointment, symbolically demonstrating that he reports to her. But Bolton has deep support in the White House and a long history of uncontrollability, and Rice is very much a work in progress. With Bolton's appointment, the empire strikes back.

Bolton is an extraordinary combination of political operator and ideologue. He began his career as a cog in the machine of former Sen. Jesse Helms of North Carolina, helping his political action committees evade legal restrictions and federal fines. Helms, the most powerful reactionary in the Senate, sponsored Bolton's rise to Ronald Reagan's Justice Department. Though he was once publicly rebuked by Reagan's press secretary as "intemperate," Bolton was critical in guiding conservative appointments to the Supreme Court and withholding damaging information on them from Congress. Then, serving on Helms' staff on the Senate Foreign Relations Committee, which refused for years to fund U.S. dues to the United Nations, Bolton was Helms for all intents and purposes. "John Bolton," Helms said, "is the kind of man with whom I would want to stand at Armageddon, or what the Bible describes as the final battle between good and evil."

Bolton is often called one of the neoconservatives, but he is more their ally, implementer and agent. His roots are in the soil of Helms' Dixiecrat Republicanism, not the neocons' airy Trotskyism or Straussianism. Bolton is a specimen of the "primitives," as Harry Truman's secretary of state, Dean Acheson, called the unilateralists and McCarthyites of the early Cold War. Through his political integration into the neocon apparatus, Bolton might be properly classified a neoprimitive.

At the State Department, Bolton was Powell's enemy within on policy after policy. In his first year alone, he forced the U.S. withdrawal from the Anti-Ballistic Missile Treaty, destroyed a protocol on enforcing the biological weapons convention ("It's dead, dead, dead, and I don't want it coming back from the dead"), and ousted the head of the Organization for the Prohibition of Chemical Weapons. He scuttled the nuclear test ban treaty and the U.N. Conference on the Illicit Trade in Small Arms and Light Weapons (to which he brought representatives of the National Rifle Association). And he was behind the renunciation of the U.S. signature on the 1998 Rome Statute creating the International Criminal Court. He described his sending the letter notifying U.N. Secretary-General Kofi Annan as "the happiest moment of my government service."

Bolton's meddling in diplomacy on nonproliferation with North Korea and Iran guaranteed that the allies had no unified position and encouraged the Koreans and Iranians to play the nuclear card. Bolton's response to the heightened crises has been to lead the charge to remove the U.N. head of the International Atomic Energy Agency, Mohamed ElBaradei. In late November, Bolton denounced Tony Blair's government and the Europeans negotiating with the Iranians as "soft" for attempting "diplomatic means."

Bolton might be granted the integrity of his primitivism, a true believer who imagines Fortress America besieged by the United Nations and the Europeans -- "Americanists find themselves surrounded by small armies of globalists, each tightly clutching a favorite new treaty or multilateralist proposal." But Bolton's coarse ideology is advanced by sophisticated campaigns of disinformation -- and not only on Iraq and North Korea. His leaks of falsehoods that Syria and Cuba had developed weapons of mass destruction sparked internal revolts by intelligence professionals and the Foreign Service.

As for his allies the neoconservatives, for Bolton the ends justify the means. But unlike them he has no use for romantic rhetoric about the "march of freedom" and "democracy," as he demonstrated so effectively in Florida. And now he has the job he sought above all from the beginning.