"This has nothing to do with the sanctity of life"

The Rev. John Paris, professor of bioethics, says Terri Schiavo has the moral and legal right to die, and only the Christian right is keeping her alive. 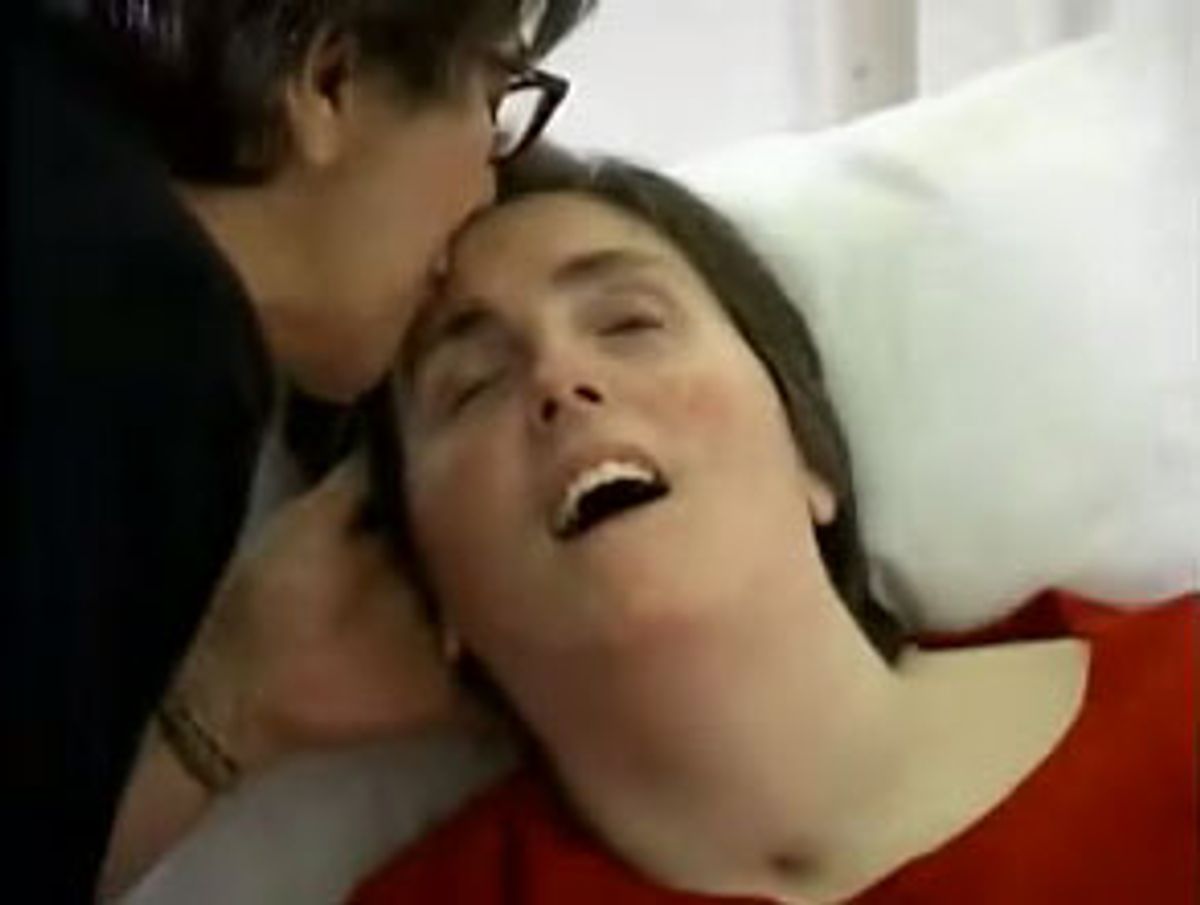 The decision on whether to allow Terri Schiavo to die has sparked endless controversy over what is legal and ethical when patients are unable to make their own wishes. One observer who brings both legal and moral authority to the debate is the Rev. John Paris, the Walsh Professor of Bioethics at Boston College.

Paris has served as an expert witness on numerous cases involving patients who were being kept alive by artificial means. He is equally capable of discussing the legal details of the Schiavo case and the Catholic Church's view of it. According to Paris, every relevant legal issue has already been decided; the only thing keeping the case alive is the fact that the Christian right has made Schiavo a cause célèbre.

Paris did not serve as an expert witness in the Schiavo case. However, when the case was reviewed by the Florida Supreme Court, he signed an amicus brief on behalf of Michael Schiavo, who wants to take his wife off life support. Salon spoke to Paris by phone on Monday morning. "This case," he says, "is bizarre."

Why is the case bizarre?

In most cases, the court has a theory, you have an appellate review, and that's the end. But this case, the parents keep coming back with new issues -- every time that they lose, they come in with a new issue. We want to reexamine the case. We believe she's competent. We need new medical tests being done. We think she's been abused. We want child protective services to intervene. Finally, Judge George Greer denied them all. He said. "Look, we have had court-appointed neutral physicians examine this patient. You don't believe the findings of the doctors but the finding of the doctors have been accepted by the court as factual." There have been six reviews by the appellate court.

What did the appellate court find?

The Florida Court of Appeals found four very interesting things. And it found them by the highest legal standard you can have -- clear and convincing evidence. The appellate court said that Judge Greer found clear and convincing evidence that Schiavo is in a well-diagnosed, persistent vegetative state, that there is no hope of her ever recovering consciousness, and that she had stated she would not ever want to be maintained this way. The court said we have heard the parents saying she didn't [say that], and we heard the husband say she did, and we believe the husband's statement is a correct statement of her position. The court also found that the husband was a caring, loving spouse whose actions were in Terri's best interests. The court said, "Remove the feeding tube," and the family protested. Of course, the family has the radical, antiabortion, right-to-life Christian right, with its apparently unlimited resources and political muscle, behind them.

So what do you think this case is really about?

The power of the Christian right. This case has nothing to do with the legal issues involving a feeding tube. The feeding tube issue was definitively resolved by the U.S. Supreme Court in 1990 in Cruzan vs. Director. The United States Supreme Court ruled that competent patients have the right to decline any and all unwanted treatment, and unconscious patients have the same right, depending upon the evidentiary standard established by the state. And Florida law says that Terri Schiavo has more than met the standard in this state. So there is no legal issue.

Are there any extenuating circumstances?

The law is clear, the medicine is clear, the ethics are clear. A presidential commission in 1983, appointed by Ronald Reagan, issued a very famous document called "Deciding to Forgo Life-Sustaining Treatment." It talked about the appropriate treatment for patients who are permanently unconscious. The commission said the only justification for continuing any treatment -- and they specifically talked about feeding tubes -- is either the slight hope that the patient might recover or the family's hope that the patient might recover. Terri Schiavo's legitimate family -- the guardian, the spouse -- has persuaded the court that she wouldn't want [intervention] and therefore it shouldn't happen. Now you have the brother and sister, the mother and father, saying that's all wrong. But they had their day in court, they had their weeks in court, they had their years in court!

Isn't the underlying social issue here one that says the law doesn't have authority over this kind of life-or-death matter?

Let me give you a test that I've done 100 times to audiences. And I guarantee you can do the same thing. Go and find the first 12 people you meet and say to them, "If you were to suffer a cerebral aneurysm, and we were able to diagnose that with a PET-scan immediately, would you want to be put on a feeding tube, knowing that you can be sustained in this existence?" I have asked that question in medical audiences, legal audiences and audiences of judges. I'll bet I have put that question before several thousand people. How many people do you think have said they wanted to be maintained that way? Zero. Not one person. Now that tells you about where the moral sentiment of our community is.

Where do you think this case is headed?

It's headed to federal court today. I cannot imagine what the federal question is. Congress said, "All we are doing is asking to have a federal court examine this." I don't know what they thought the courts were doing in the last eight years. They are saying, "We're asking a court to review this, to be certain that due process has not been violated." I don't think there is a case in the history of the United States that has been reviewed six times by an appellate court. Remember, the United States Supreme Court refused to review this.

As a priest, how do you resolve questions in which the "sanctity of life" is involved?

The sanctity of life? This has nothing to do with the sanctity of life. The Roman Catholic Church has a consistent 400-year-old tradition that I'm sure you are familiar with. It says nobody is obliged to undergo extraordinary means to preserve life.

This is Holy Week, this is when the Catholic community is saying, "We understand that life is not an absolute good and death is not an absolute defeat." The whole story of Easter is about the triumph of eternal life over death. Catholics have never believed that biological life is an end in and of itself. We've been created as a gift from God and are ultimately destined to go back to God. And we've been destined in this life to be involved in relationships. And when the capacity for that life is exhausted, there is no obligation to make officious efforts to sustain it.

This is not new doctrine. Back in 1950, Gerald Kelly, the leading Catholic moral theologian at the time, wrote a marvelous article on the obligation to use artificial means to sustain life. He published it in Theological Studies, the leading Catholic journal. He wrote, "I'm often asked whether you have to use IV feeding to sustain somebody who is in a terminal coma." And he said, "Not only do I believe there is no obligation to do it, I believe that imposing those treatments on that class of patients is wrong. There is no benefit to the patient, there is great expense to the community, and there is enormous tension on the family."

How do you square that with the pope's comments last year, which seemed to indicate that people in Schiavo's situation should be kept alive?

The bishops of Florida did it very nicely when they said, "There is a presumption to use nutritional fluid, unless the continued use of it would be burdensome to the patient." So it's not an absolute. That statement is a recognition that the Vatican is inhabited by the same cross section of people that inhabit the United States

I mean there are some radical right-to-lifers there, and they got that statement out. But it has to be seen in the context of the pope's 1980 declaration on euthanasia, and the pope's encyclical on death and dying, in which he repeats the long-standing tradition that I just gave you. His comment last year wasn't doctrinal statement, it wasn't encyclical, it wasn't a papal pronouncement. It was a speech at a meeting of right-to-lifers.

Again, this issue is not new. Every court, every jurisdiction that has heard it, agrees. So you'd think this issue would have ended. I thought it ended when we took it to the Supreme Court in 1990. But I hadn't anticipated the power of the Christian right. They elected him [George Bush]. And now he dances.