The GOP policymakers who have intervened in the Schiavo case pose as Christian moralists, but they more closely resemble tribal medicine men conducting necrophiliac rites. 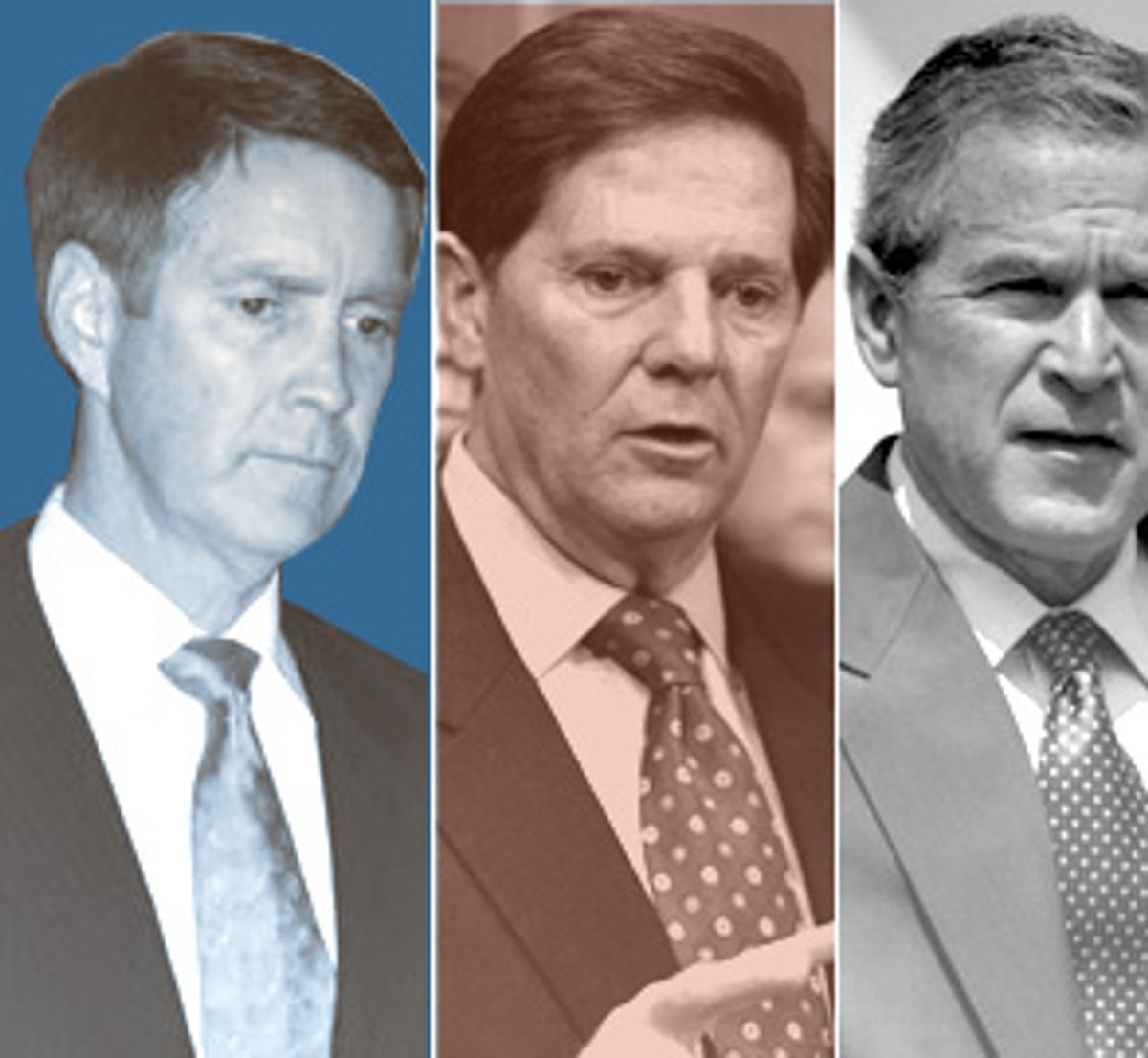 The politics of piety were transparently masked by Republicans in their attempt to make capital over the fate of Terri Schiavo, a brain-damaged woman who has been locked in a persistent vegetative state for 15 years and whose feeding tube was ordered removed by a Florida state judge at the request of her husband. At last, the case that had been considered by 19 judges in seven courts and appealed to the Supreme Court three times, which refused to hear it, seemed resolved. But Republican congressional leaders and President Bush seized upon the court ruling as the moment for "a great political issue," as a memo circulated among Senate Republicans put it. The Democrats, it declared, would find it "tough," and the conservative "pro-life base will be excited." The president, who had hesitated for three days before making a statement on the tsunami last December, rushed from his Crawford, Texas, ranch back to the White House to sign the legislation.

The Schiavo case is unique among all medical cases, including some 35,000 others involving people in persistent vegetative states. It is the only one in which the parents, who are not legal custodians, have been granted by an act of Congress and the president a federal court review of state court rulings. Wresting jurisdiction from the state judiciary is an unprecedented usurpation, a travesty of the federal system, displacing the Constitution with an ill-defined faith-based "culture of life," enthroning by edict theology above the law, not to mention what ambulance-chasing personal injury attorneys call forum shopping in the courts.

In 1999, then Gov. George W. Bush signed a Texas law permitting hospitals to cease artificial life support when doctors decide reasonable hope is gone, even if the patient's family objects. Now, two months into his second term, his major domestic initiative to privatize Social Security is doomed, his budget dead on arrival and his favorability ratings down to 45 percent approval, his low point. His brother, Gov. Jeb Bush of Florida, has campaigned for years on the Schiavo holy crusade, and has even hired a prominent religious right-wing leader as the lawyer to represent the state in the case. The agonized parents in their legal battle have made themselves financial dependencies on two conservative groups, one antiabortion, the other with a stated mission to "confront and challenge the radical legal agenda advocating homosexual behavior." (The Schindler-Schiavo Foundation is under investigation by the state of Florida for operating illegally.)

Senate Majority Leader Bill Frist of Tennessee is a leading candidate for the Republican presidential nomination in 2008. For him, the Schiavo case is the beginning of the struggle for Bush's succession. A heart surgeon before his entry into politics, he signs correspondence "Bill Frist, M.D.," and the nameplate on the front door to his Capitol Hill office reads "William H. Frist, M.D." Amid the debate, after watching snatches of videotape of Schiavo, he proclaimed a diagnosis that she was not vegetative, contrary to the findings of neurologists who have personally examined her. Several months ago, in a national TV interview on ABC, Frist refused to acknowledge that saliva and tears cannot transmit HIV/AIDS, one of the shibboleths of the religious right.

House Majority Leader Tom DeLay of Texas has been thrice rebuked by the House ethics committee, he has paralyzed the committee in order that it not consider new, more serious charges against him, his closest aides are on trial in Texas for corruption, and he has taken measures to try to protect his power from being stripped if he is indicted. At a meeting of a right-wing group, he explained the Schiavo case as divinely inspired to rescue conservatives from martyrdom. "One thing God has brought to us is Terri Schiavo," said DeLay. "This is exactly the issue that's going on in America, the attacks on the conservative movement against me and many others ... This is a huge nationwide concerted effort to destroy everything we believe in ... and we have to fight back."

Like Frist, DeLay plays doctor. "She talks and she laughs and she expresses likes and discomforts," he declared. "Come down, President Bush," said the anguished husband, Michael Schiavo. "Come talk to me. Meet my wife. Talk to my wife and see if you get an answer. Ask her to lift her arm to shake your hand. She won't do it."

Terri Schiavo cannot speak or gesture, but to true believers, she is making sounds only they can hear. They see what they want in order to believe and they believe in order to see. For the first time, public policy in the United States is being made on the basis of pitting invisible signs vs. science.

As in some tribal cultures, a confederacy of shamans -- Bush, Frist and DeLay -- have appeared to conduct rites of necrophiliac spiritualism. Only the shamans can interpret for the dying and control their spirits hovering between heaven and earth. Public opinion polls show overwhelming disapproval of the Republican position. But these polls are just so much social science. In this operation, for the tribe, there is no way of proving failure.