Ashton Kutcher and Bernie Mac try to bridge color lines in this reverse take on "Guess Who's Coming to Dinner?" 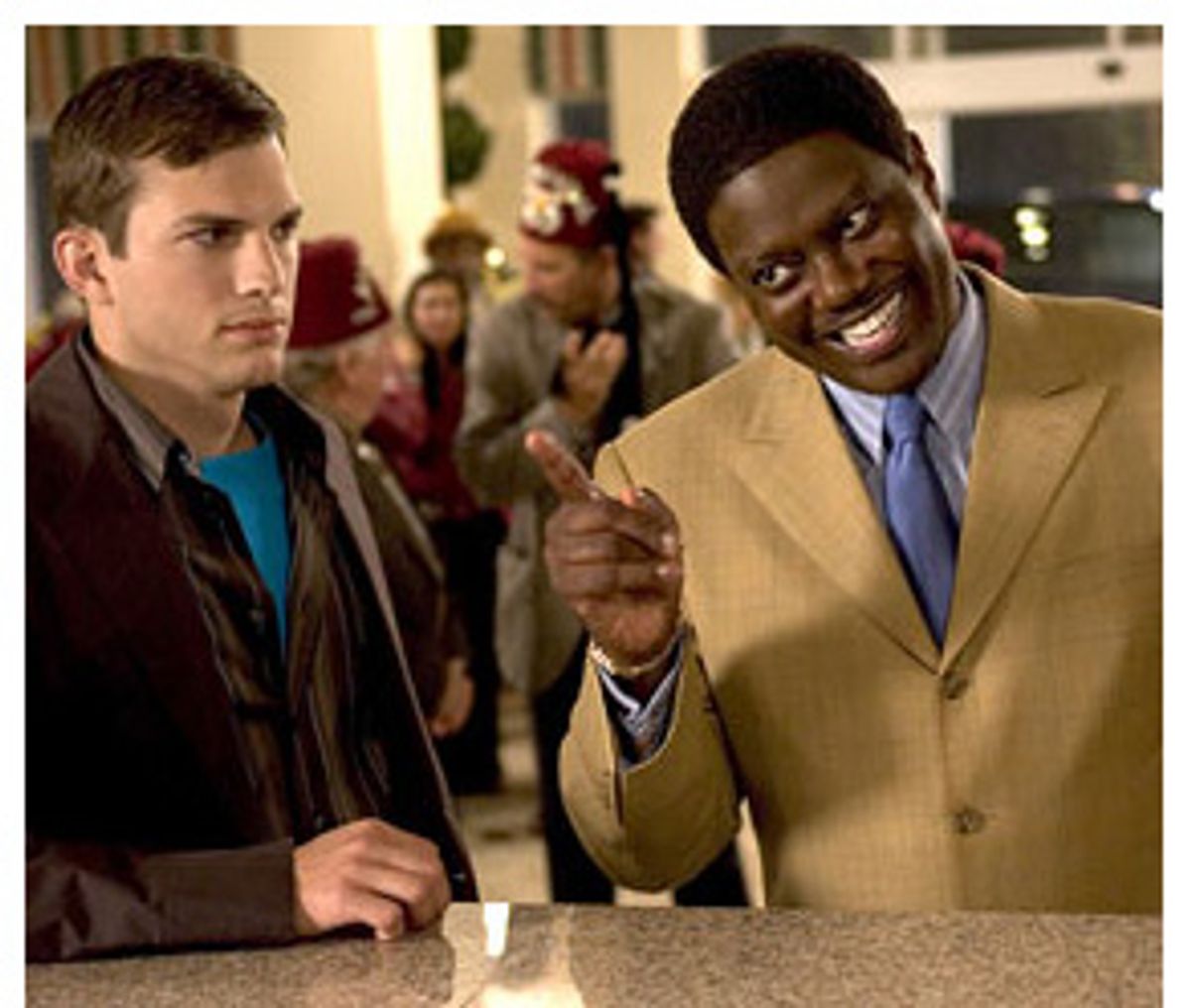 In "Guess Who," directed by Kevin Rodney Sullivan ("Barbershop 2"), Ashton Kutcher plays an incomprehensibly sweet hotshot stockbroker named Simon who's secretly engaged to his stunning artist girlfriend, Theresa (Zoë Saldaña). But Theresa's parents, Percy (Bernie Mac), a bank loan officer, and Marilyn (Judith Scott), a school principal, don't know that Simon is white. When Theresa brings Simon home to the affluent New Jersey homestead, he faces not only the usual "Are you good enough for my daughter?" scrutiny -- served up by one intimidating daddy -- but also nagging feelings of inadequacy for not being the "right" color.

The idea behind "Guess Who" -- the title is an obvious play on "Guess Who's Coming to Dinner?" -- is both simple and brilliant. Most movies about interracial family relations involve a nervous white person taking the supposedly daring step of actually bringing a boyfriend or girlfriend of color home to meet the folks -- it's usually the white people who are put on edge by the presence of an "outsider" and who must learn to become open-minded individuals blind to skin color. But "Guess Who" (which was written by David Ronn and Jay Scherick, and Peter Tolan) is honest enough to admit that none of us is blind to skin color -- and what's more, blindness isn't the solution to racism, anyway.

"Guess Who" treats cultural differences as a gag instead of a sticking point. And it's the first mainstream movie I've seen to acknowledge that class divisions are sometimes even more complicated than racial ones: Simon was raised by a single mother who worked three jobs to support him. Percy and Marilyn have raised their two daughters (the other is played by the saucily amusing Kellee Stewart) in an affluent suburb, and they live in what looks to be a mansion. In other words, which puts an individual at a bigger social disadvantage, his skin color or his class? There's no simple answer to that question, but it's at least a novel backdrop for a comedy.

But "Guess Who" just doesn't go far enough with the idea. Its early moments hold some promise: When Simon and Theresa emerge from the cab they've taken to New Jersey, and Theresa's parents realize Simon isn't what they were expecting, he tries to break the ice with a goofy joke (at which no one laughs): "I wish Theresa woulda told me you were black -- that woulda saved an awkward moment." Later, during an anxious dinner-table scene, Percy goads Simon into telling a series of increasingly outrageous racial jokes, which the family does laugh at. On a roll, and thinking he's finally nudging his way into the family's good graces, he tells one whose punch line involves the supposed unwillingness of black men to work. The family turns on him, and any advantage he's gained is lost.

Even though the idea behind that scene is fresh and very funny (as well as being rather pointed), the sequence just doesn't move forward as confidently and directly as it should. And that happens in scene after scene in "Guess Who": The timing of nearly every gag is just half a beat off, and that half-beat is a killer. One problem may be that the chemistry between Kutcher and Mac is all wrong, and good chemistry is a must here: Since this is essentially a romantic comedy, their characters need to fall in love with each other. Kutcher has a sweet, pleasant face, but his line readings have no zing. And Mac, always a wonderful comic actor (his performance in last year's marvelous "Mr. 3000" was sorely underappreciated by both critics and moviegoers), just can't carry the movie by himself. He's a strong personality, and he needs an ironclad actor to stand up to him. (Saldaña, on the other hand, a sharp and delightful actress, has chutzpah to spare; you do wonder what she's doing with a shapeless thing like Simon.)

"Guess Who" is disappointing for another reason: Week after week, we see the release of movies geared specifically toward black audiences. Some of those pictures, like "Diary of a Mad Black Woman," are completely off the radar of white moviegoers, although they become big hits on the strength of the black moviegoing audience alone. It's as if we're growing two separate-but-equal moviemaking industries in this country. Wouldn't it be ideal if most comedies, at least, could bridge color lines? "Guess Who" was probably made with those intentions, an effort to bring two disparate audiences together and encourage them to laugh at each other as well as with each other. The super-duper whiteness of Ashton Kutcher is funny. Just not funny enough.