Where the Iraqis really do throw flowers

The Kurds love American GIs. But will the good feelings continue if the U.S. has to rein in Kurdish ambitions? 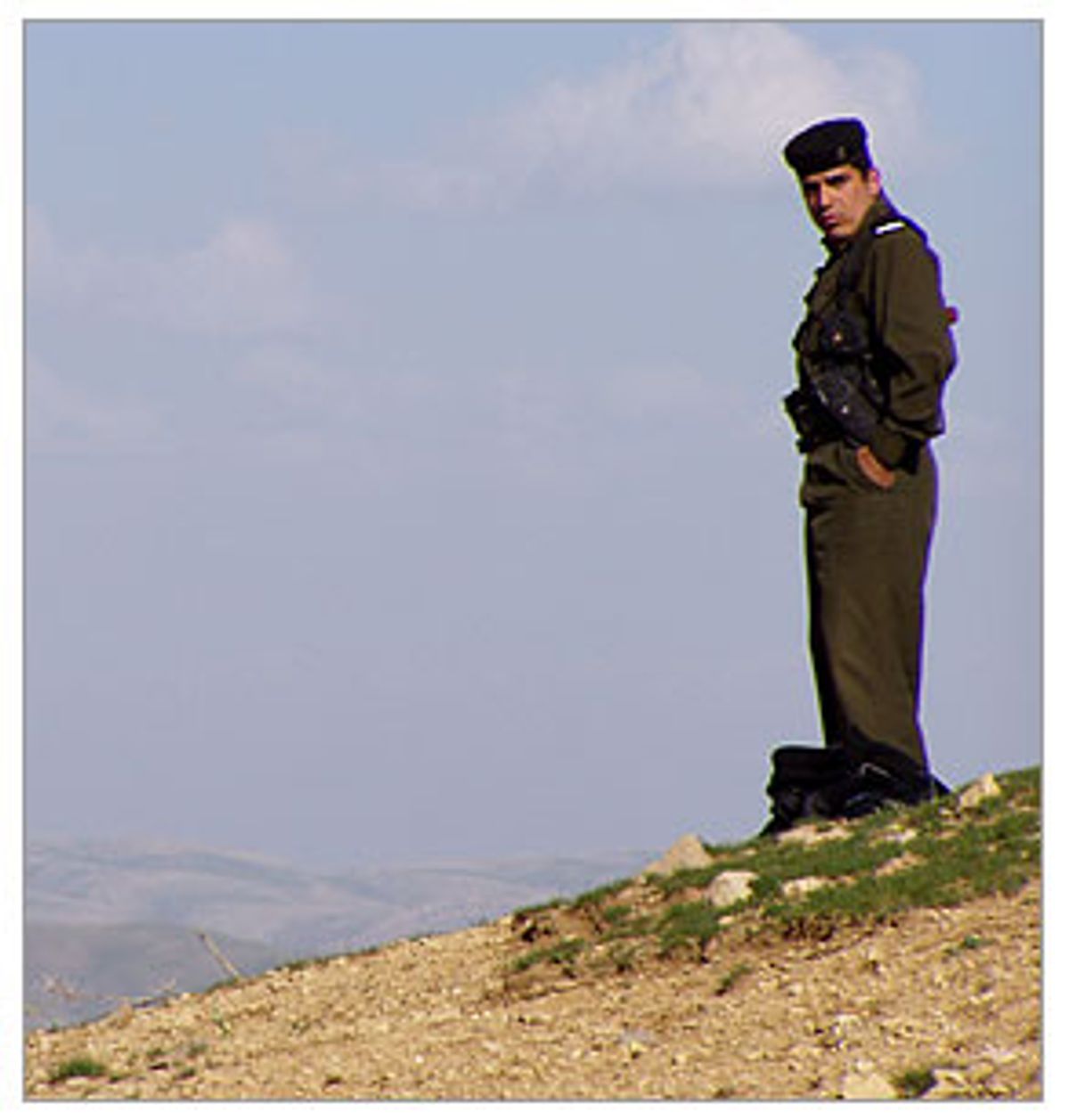 Even New York City traffic pales compared to this: On March 22, thousands of cars, trucks, tractors and donkeys crowd a winding mountain highway outside the Kurdish city of Sulaymaniyah in northern Iraq, lurching and honking and weaving, careening within inches of precipitous slopes as drivers battle to make their way to mountaintop parks and resorts. There are no lanes, no traffic lights, and only a handful of weary cops with resigned expressions waving at passing cars. Despite the tumult, drivers and passengers alike slow and cheer as their cars pass a log-jammed patrol from the Idaho National Guard's 148th Field Artillery Regiment, based at Camp Stone just outside the city.

"They love us here," Sgt. 1st Class Jose Alvarez Jr., 34, says. He smiles and waves at a truck full of pretty Kurdish girls in traditional dresses.

Especially today. It's Noruz, the Kurdish new year, a celebration of the day more than 1,500 years ago when, they say, a Kurdish blacksmith defeated a tyrant whose shoulders sprouted satanic baby-eating snakes. Until liberation in 2003, Kurds in Saddam Hussein's territory were prohibited from celebrating any national holidays. Now they're making up for lost time --- and they have soldiers like these 148th troopers to thank for it.

Elsewhere in Iraq, in cities like Baghdad, Baquba and Mosul, the armed insurgency against U.S. and Iraqi forces continues to claim lives. But this is the other Iraq, the area in and around semiautonomous Kurdistan, where for more than a decade after the Gulf War, U.S. fighter jets kept Iraqi forces at bay so that the Kurds could live in relative peace and prosperity. Here, most locals welcome the American soldiers. Even Staff Sgt. John Murdoch, a 35-year-old math teacher from Idaho Falls, is a hero. "As far as deployments go, this is a pretty good one," he says.

Atop the mountain, at a hilly, flower-sprinkled resort teeming with Kurds in traditional baggy suits and sequined dresses, Murdoch attempts the traditional Kurdish dance (left foot, right foot, shake your shoulders), jokes with teenagers who marvel at his over-6-foot height, and holds babies while their parents snap photos.

In light of Iraq's volatile sectors, the soldiers almost can't believe their luck. Day after day, they play ambassador to an adoring nation. They tour the countryside with Kurdish colonels and generals, eat kebabs in restaurants where the patrons smile and wave, and even visit a carnival built atop a former Iraqi army outpost to shake hands and sip smoothies.

It may seem like a walk in the park -- and sometimes it literally is -- but there's a serious military purpose here, the maintaining of a different kind of order. After a decade of relative autonomy within Iraq's borders, the unofficial Kurdistan is strong and self-reliant, with its own armies, courts and national assembly. And it's only getting stronger. Kurds living abroad have begun to return home to set up new businesses. Construction is booming. Families forcibly evicted by Saddam's armies are reclaiming their property. The Kurds in Kirkuk, which lies just outside Kurdistan's de facto borders and commands 40 percent of Iraq's oil, are demanding a greater share of oil revenues and more political power. And as part of a deal with the Shiite majority United Iraqi Alliance, Kurdish leader Jalal Talabani is expected to become Iraq's next president, in exchange for Kurdish backing of the alliance's pick for prime minister.

Indeed, the Kurds are rising. And the U.S. Army is here to make sure they rise only so far. The Kurds' ambitions for full independence are well known, and U.S. officials have faced a delicate balancing act in ensuring that the powerful minority region is integrated into plans for a unified, democratic nation. A fight over control of key resources, not to mention the eruption of ethnic vendettas, could spark the civil war many have feared would rock post-Saddam Iraq.

"Without us, the Kurds would have their own country by now," says 2nd Lt. Rick Ferrell, whose Tennessee Guard unit -- the 278th Regiment -- performs a mission similar to the 116th's, albeit with less dancing, further east near the Iranian border. "We're a buffer," Ferrell says.

Acting as a buffer sometimes feels like a strange role to the 116th. Most soldiers here say they like the Kurds as much as the Kurds like them. At Camp Stone, in stark contrast to most bases in Iraq, there's a real sense of kinship between occupiers and occupied. Many soldiers are learning Kurdish from the handful of translators who live and work alongside them at this tiny outpost sandwiched between a chicken farm and the national headquarters of the peshmerga, Kurdistan's fierce green-suited militia. On March 23, over omelets whipped up by an Army cook in a brown T-shirt, 24-year-old medic Spc. Sean Peine recites the handful of phrases he's learned from K.G., a translator in his mid-20s:

At the hilltop resort, Peine strolls rolling green slopes and talks about the dental missions he leads into isolated villages in these mountains. Despite Kurdistan's relative prosperity, there are plenty of places with no dentists and lots of health problems. He says it breaks his heart to see these people suffer.

The 148th's Noruz celebrations are hosted by Iraqi army Brig. Gen. Anwar Dolani, 47, an enormous bear of a man wearing a brown suit and clutching a bottle of scotch in one hand and a cigarette in the other. He presses Peine and the other Americans into plastic seats and barks at his men to bring soft drinks, kebabs and chai. Then he sits, drinks, smokes and watches his liberators stuff themselves with food that's almost guaranteed to give them indigestion.

Fourteen years ago, Dolani was a renowned peshmerga officer. In 1991, when the old Iraqi army moved to crush Kurdish resistance in these mountains, Dolani and one of his lieutenants, Ahkmed Mohamed Kamal -- now a colonel under Dolani in the new Iraqi army -- were there to stop them. On a mountain road near the celebrations, the rusting hulk of a destroyed Iraqi tank marks the spot where Dolani and Kamal's soldiers stopped the Iraqis cold. It was a heady moment in the decades-long Kurdish resistance, and sweet revenge for a defining atrocity that had occurred only three years earlier.

It was March 16, 1988: Iraqi fighter jets swooped low over the Kurdish town of Halabja, a peshmerga stronghold, dropping the lethal agents sarin, tabun and VX, and canisters of mustard gas. Thousands died instantly. Thousands more clawed to rivers and streams seeking relief from the burning only to die in the water. Kamal and his troops cautiously approached the town. When they sensed the gas, they turned and fled back into the mountains that had protected them for so many years.

In 2003, after the fall of Baghdad and the liberation of Kurdistan, survivors of the Halabja attack built a memorial in the ruined town. Inside, there's a black wall inscribed with the names of all 5,000 victims. Outside, there's a cemetery with rows of identical headstones under a sign that reads "It's not allowed for Baaths to enter."

Today, Kamal and K.G. stand among the headstones, Kamal alone with his thoughts, K.G. recalling the day in 1991 when his family fled Kurdistan ahead of Saddam's army. After years of flight that claimed the life of his father, K.G. settled in Texas in 1997 and took a job translating for the Defense Department. (Translators in Iraq have been threatened by insurgents for collaborating with U.S. forces; K.G., who works in Sulaymaniyah for the Army, asked that his full name be withheld.) K.G. says he's proud of America's work in Kurdistan -- but in spite of all the local goodwill today, the United States still shares the blame for the area's troubled past. "The U.S. helped out Saddam," he says, referring to the Reagan administration's support of Saddam during the Iraq-Iran war two decades ago -- which included helping supply the Iraqi dictator's chemical weapons program.

Nevertheless, Kamal is back home now -- one of his homes, at least -- and it's all about "freedom," he says.

In light of the region's wealth and progress, Kurdistan's freedom may be Iraq's loss. After lunch, Dolani sounds a conciliatory note. "We Kurds are never against anyone," he says. "On earth, a human's a human. We want to have a unified Iraq."

But on the way back to Camp Stone after a pensive afternoon at Halabja, Kamal sings a different song. "There are 40 million Kurds in the world. This is the 21st century. Everyone's getting educated, getting technology," he says. "But we don't even have a country."

David Axe is a reporter for Free Times in Columbia, S.C., embedded with TF-82 in Baqubah, Iraq.