As the media circus leaves town, protesters are left wondering what Terri Schiavo's death will say to the nation. 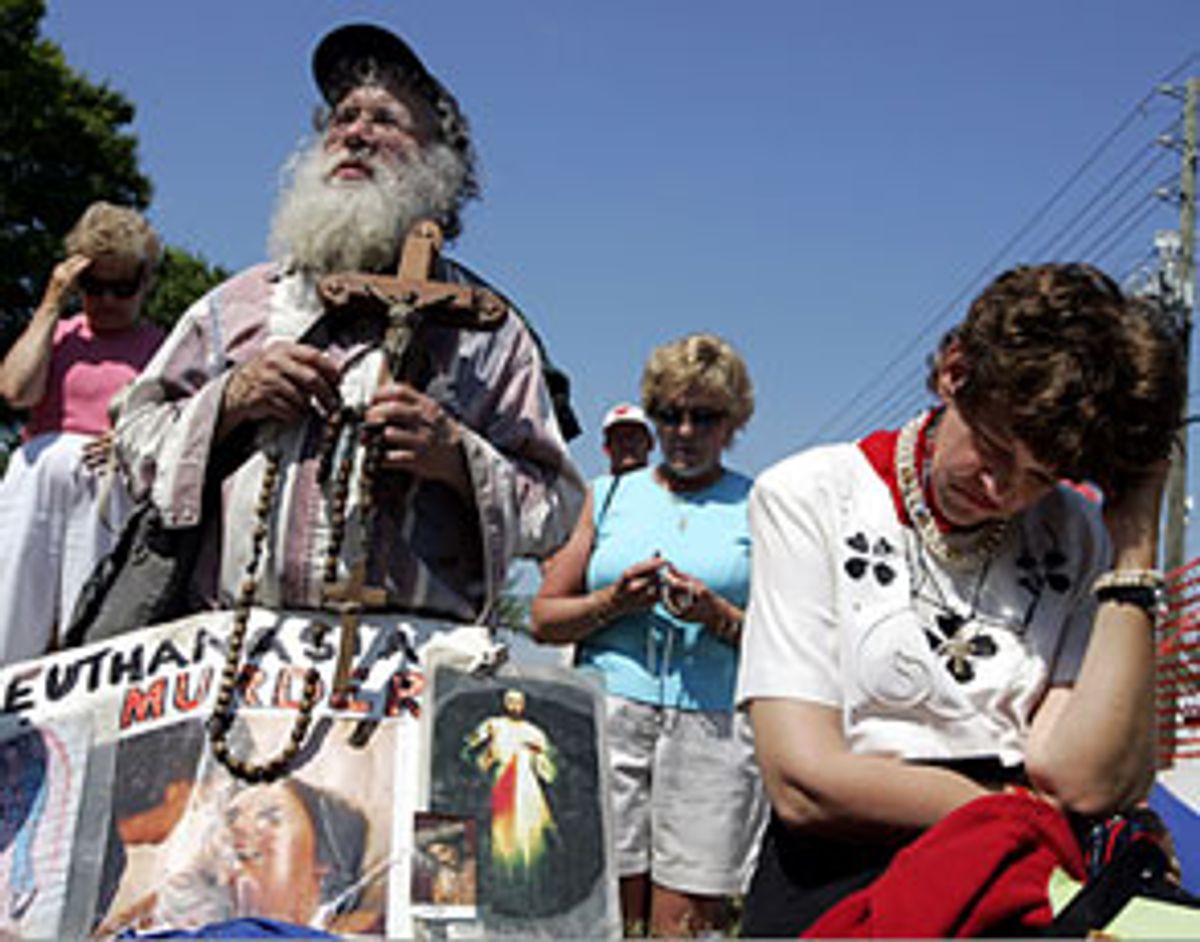 In the end, the miracle did not come.

For more than two weeks, hundreds of pilgrims poured in to this otherwise unremarkable corner of the nation to hold forth outside the serene-looking, red-brick campus of the Woodside Hospice, where they felt God's law was being violated by man. They attempted, and even expected, nothing less than to set right the sin of letting Terri Schiavo die. But early Thursday morning, a time when most were not here to bear witness, Schiavo slipped away. God, some freely admitted, spurned their prayers.

Outside the hospice, Randall Terry, the antiabortion activist who has been a leading counselor and spokesman for the Schindler family during the past few weeks, told reporters that all he felt was "shock, dismay, disbelief, grief and grave disappointment." The Schiavo case's political repercussions, he suggested, would be momentous. Last week, he'd said there'd be "hell to pay" if Schiavo was allowed to die. But today, he said, "I want this sacred moment of Terri's departure to stand alone."

Terry, who over the course of his career has practiced the most dangerous sort of divisive politicking, fought back tears as he suggested that Schiavo's death might even bring the nation close together. Pointing out that Jesse Jackson had preached in favor of keeping Schiavo alive, Terry said that he prays "the rancor could subside."

The gathered dozens weren't in the mood for conciliation. "By allowing our law to starve a woman to death, a great revenge is going to be brought upon this nation," a man who gave his name as Duke Righteous said. Righteous, a big, charismatic fellow who clutched a Bible and referred to it frequently during an interview, had driven here from Missouri four days ago. He hoped, but was never quite certain, that he and the others could have saved Schiavo. Like many others, he now wondered whether Schiavo's death, despite the activists' best efforts, would serve some larger purpose. "Did God not answer our prayers for a reason?" he asked.

Janet Spear, who arrived two weeks ago from Birmingham, Ala., provided a kind of answer. "I have no reason to believe that she's not in a better place right now," Spear said. "But we aren't in a better place." In Nazi Germany, she said, genocide began with mercy killings of the mentally ill. Schiavo's death, in Spear's mind, was no different.

It's hard to know whether the passion expressed by folks here will last at all beyond today. After all, crowds have thinned during the past couple of days. The disappointing news had taken its toll. First in Atlanta and then in Washington, federal judges refused to intervene. In Tallahassee, despite the personal pleas of Jackson, state legislators and Florida Gov. Jeb Bush, Schiavo was allowed to die.

By Thursday morning, only the die-hards remained in front of the hospice, and their efforts could hardly be called protesting. They would only bring out their signs and begin to chant when reporters were broadcasting live press conferences. There were a trillion cameramen who were more than happy to oblige.

There's no better way to describe the scene outside the hospice than to say that this narrow, dead-end stretch of 102nd Avenue -- where Woodside sits adjacent to an elementary school and across from a gift shop, some self-storage centers and a few nondescript industrial buildings -- has simply been devoured by media. Daily life inside the hospice was reportedly normal these past weeks. But outside, nothing else (not even the school) has been open, and every inch of ground not protected by police had been appropriated by news people.

It may have been unreasonable to ask protesters to maintain a dignified vigil. Seizing the chance to be heard through the megaphone of the modern broadcast, they couldn't be blamed for trying. To attract the cameras, a number of people wore crazy costumes, or performed stupid pet tricks, or played up their eccentricities. On Wednesday, I stood behind a German TV crew as it interviewed a big guy who'd cultivated the look of a WWF wrestler. The fellow held forth not very charitably on Michael Schiavo and then, by way of conclusion, added that German rock bands rocked better than bands anywhere else.

Still, there was genuine moral feeling on the side of the protesters. When you talked to these astonishingly conservative people, it wasn't hard to see their connection to the arch-liberals who stand vigil outside death-row prisons. Both groups consider our laws fatally unjust, both believe they have high-minded morality on their side, and both know that forcing the country to adjust its laws to their morals will require a heroic, long-term effort. Schiavo wouldn't be the first person to die unjustly as a result of society's blind immorality, these people said. And even if their protests have failed, there was no sin in bearing witness to the end.

Politically, it's another story. Under George W. Bush, religious conservatives have grown used to winning their battles. It is difficult to say whether Schiavo's death will mark their first big loss or be the kind of cut that only makes them stronger. On Thursday morning, Frank D'Angelo, a Canadian who'd come to Florida after he heard Mary Schindler plead with Gov. Bush not to let her daughter die of thirst, was brought to tears as he discussed Terri Schiavo's final moments. That scene -- a daughter separated at death from her parents -- has a narrative power that people will appreciate, D'Angelo said. It's the kind of thing that can change laws.

Right-wing talk stations here, which have done much to keep the Schiavo case in the news for the past five years, are proclaiming this a new day in America. The callers and the jocks say that Schiavo's final moments will usher in a new moral code in America.

But that remains to be seen. On Thursday afternoon, after the press conferences had gone dark, most of the pilgrims said they planned to stick around for a few days to attend Schiavo's funeral. One wonders if these people will continue their fight after that -- and if their allies in Congress will fight with them. For all their energy, this is one of those cases that may well come to naught. Like those media firestorms that erupt in the land from time to time (often in Florida -- remember Elián?), this could be one of those things we forget about tomorrow, an intense national drama that never again affects the larger world.