In gods we trust

Evangelicals insist that the U.S. is a Christian country. An increasing number of Americans beg to differ. (So does the Constitution.) 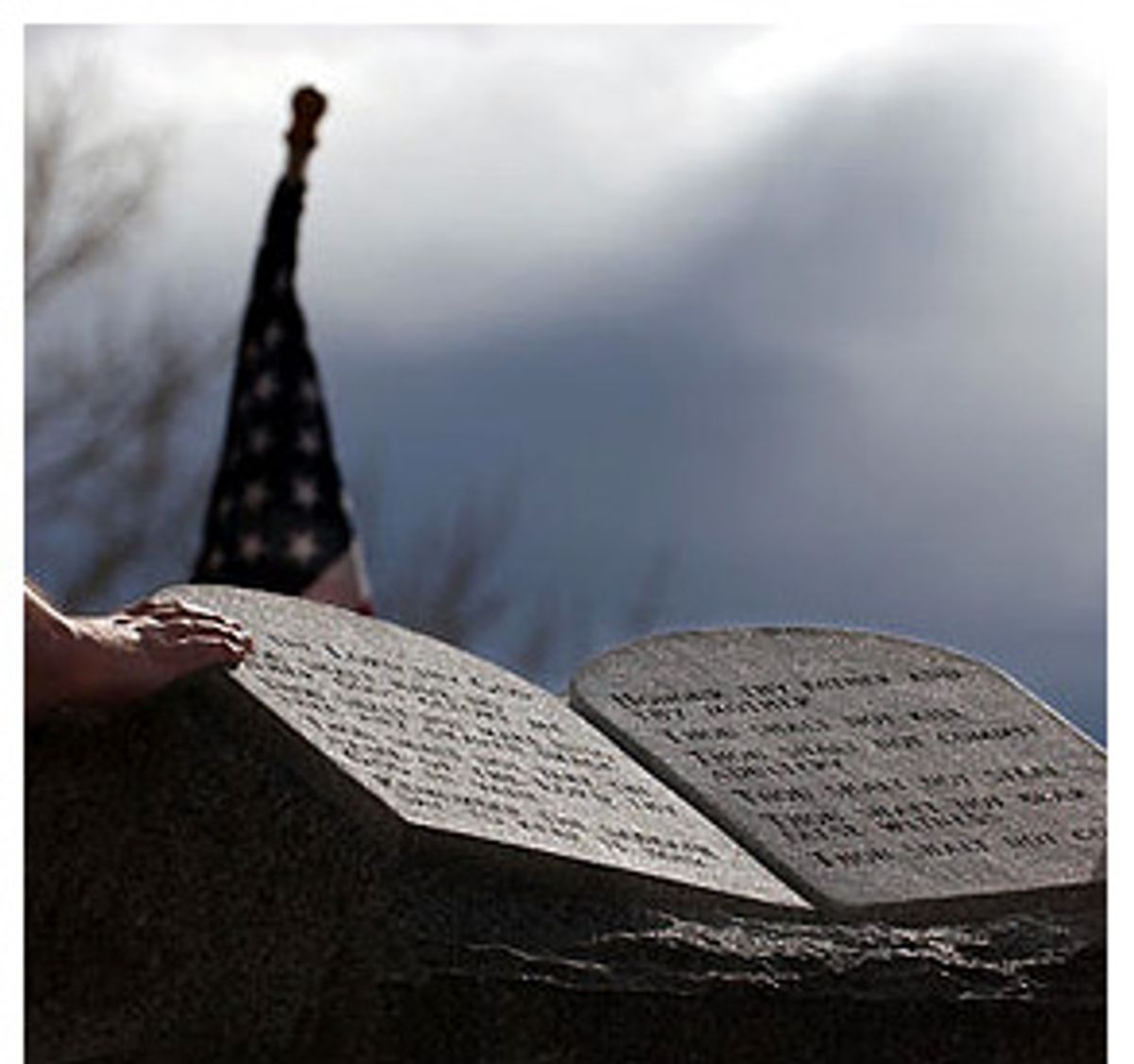 It isn't just Michael Schiavo -- even George W. Bush has drawn the wrath of American evangelicals. In February 2002, the president and Laura Bush visited a Shinto shrine in Japan, to which they showed respect with a bow. They were immediately denounced by evangelical organizations for having "worshipped the idol." To listen to the anguished cries of disbelief from Bush's Christian base, you would have thought he had met the same fate as Harrison Ford in "Indiana Jones and the Temple of Doom," where Indie was hypnotized by the evil rajah into worshipping the pernicious Hindu idol of the thugees.

The reason for the evangelicals' frenzy is the first two commandments of the Decalogue (the Ten Commandments), said to have been given to Moses on Mount Sinai by God. The first says, "Thou shalt have no other gods before me." The second says, "Thou shalt not make unto thee any graven image, or any likeness of any thing that is in heaven above, or that is in the earth beneath, or that is in the water under the earth. Thou shalt not bow down thyself to them, nor serve them: for I the LORD thy God am a jealous God..." George and Laura's respectful nod to the spirits in the Meiji Shrine violated those precepts in the eyes of true believers.

Both the reelection of George Bush and the Schiavo travesty have heightened the sense that the religious right in the United States is all-powerful. Reading the press, you get the impression that almost all Americans are devout Christians, people who believe in a literal heaven and hell and spend their idle moments devouring the "Left Behind" novels about the end of the world. This isn't true -- and it's getting less true all the time. While evangelical Christians are a significant political force, they are probably only a fifth of the country, and not all of them are politically conservative: Only 14 percent of voters in an exit poll for the presidential elections in 2000 characterized themselves as part of the "Christian right." In fact, polls show that the United States is becoming less religious. Only about 60 percent of Americans say religion is important in their lives. The United States is still a predominantly Christian country, but it is no longer an overwhelmingly Christian one. And more and more Americans are either non-religious, unchurched or subscribe to non-Christian religions.

The public relations fiasco that attended the Republican Party's cynical attempt to play the religion card in the tragic case of the brain-damaged Terri Schiavo suggests that the religious right has jumped the shark. (This phrase refers to the point at which a popular television series does something weird and over-the-top and then goes into a ratings spiral.) Still, it has not given up exploiting God for political gain, as demonstrated by the widespread movement among American evangelicals to place the Ten Commandments in public buildings. Secular analysts cast this struggle as one between liberal and conservative principles. There is another conflict going on here, however, between the new multicultural America of many religions (or none), and the traditionally Christian-dominated country that is fading away at the beginning of the 21st century.

In 2001, Chief Justice Roy Moore of Alabama had a massive two-ton granite monument bearing the Ten Commandments wheeled into the state Supreme Court building. The Southern Poverty Law Center and other organizations sued to have it removed, on the grounds that its installation in this public building constituted a state endorsement of a particular religion.

The First Amendment to the U.S. Constitution says, "Congress shall make no law respecting an establishment of religion." This archaic phrase is now difficult to understand. In colonial times, each of the 13 colonies had an "established" religion, which was officially endorsed by the government and imposed on citizens. In Anglican Virginia, ship captains who brought Quakers into the state were fined, and dissidents were tried for heresy. The Bill of Rights was intended to ensure that the federal government of the new United States did not "establish" (that is, adopt as official and obligatory) any particular religion.

The courts ruled against Moore, but he refused to obey them, declining to mothball the monument to the Ten Commandments. A special judicial court removed Moore from his position as chief justice late in 2003. Moore complained to CNN, "Without acknowledgement of God, we have no justice system, according to the Constitution. And that, I'm sworn to uphold."

But fewer and fewer Americans are interested in Moore's God.

Since 2003, the movement to display the Ten Commandments on government property has spread faster than SARS on an Asian chicken farm. One Indiana county cleverly displayed the Decalogue as a historical document alongside other such documents, and on March 29 of this year the Seventh Circuit Court of Appeals upheld its right to do so. The day before, the Mississippi Senate had voted to display the Ten Commandments in all public buildings.

The Moore case has been taken up by the U.S. Supreme Court. Among the groups that filed a "friend of the court" brief against the Ten Commandments monument was the Hindu American Foundation, along with Buddhists and Jains.

How significant is this ranging of American non-Christians against the Decalogue? The 2001 American Religious Identification Survey, conducted by the Graduate Center of the City University of New York, discovered an America that is changing rapidly with regard to religion. In the 11 years since the first such poll (done in 1990), the number of Americans who considered themselves to have no religion increased from 8 percent to 14 percent. In real terms, these open unbelievers increased from 14 million to nearly 30 million, as extrapolated from the polls. In addition, the proportion of Americans who identified with a specific religion fell from 90 percent to 81 percent.

Despite all the thundering by the Revs. Franklin Graham and Jerry Falwell about the evils of secular humanism, then, it is making rapid inroads in American society. Worse for them, the percentage of Americans who say they are "Christian" fell from 86 in 1990 to only 77 in 2001.

The elephant-headed god Ganesha is a favorite of Hindu worshippers, especially in western India. Ganesha has come to America, too. If you visit the Web page of the Bharatiya Temple in Troy, Mich., you will find a hyperlink to the left marked "Images." In Old Testament language, it might as well say "graven images." A statuette of Ganesha is displayed there. Asian and other non-Christian religions (Buddhism, Islam, Hinduism and so forth) still do not make up more than about 4 percent of the American population, but their adherents grew from about 5 million to over 7 million between 1990 and 2001 in the SUNY poll (which probably undercounts the smaller groups). As the Asian population grows in the United States, the number of Buddhists and Muslims will increase significantly. The United States adds a million immigrants a year, many of them from Asia.

Although American Muslims agree with the precepts enshrined in the Ten Commandments, they are fully aware that the move to post it in public buildings is designed to bolster the Christian right in an exclusivist way, and so they have largely made common cause with American Hindus against it.

The friend-of-the-court brief filed by the Hindus and others notes, "To members of non-Judeo-Christian religions, the Ten Commandments do not merely recite non-controversial ethical maxims; several Commandments (e.g., the first, second and third) address the forms and objects of religious worship." Underlining that there are nearly a million Hindus in the United States, and some 700 Hindu temples, the brief says, "Nor can Hindus accept the First Commandment's prohibition against 'graven images.' The use of murtis (sacred representations of God in any of God's various forms) is central to the practice of the religion for virtually all Hindus." The government-sponsored posting of the Ten Commandments implies a U.S. government preference for a theology that Hindus cannot accept. As for the country's 3 million Buddhists, the brief is even more blunt: "The conception of God, or the notion of worshipping creator gods, is considered an obstacle to the enlightenment sought by Buddhists."

Government endorsement of any particular religion's conception of God is also an obstacle to the American dream, of a society where the state is neutral with regard to theology. The founding fathers signed into law a 1797 treaty with Tripoli (now Libya), which declares that "...the government of the United States is not, in any sense, founded on the Christian religion" and adds that "it has in itself no character of enmity against the laws, religion or tranquility of Musselmen [Muslims]." The idea of the United States government as religiously neutral was linked in this treaty with the notion of peace among nations. The treaty adds, "it is declared ... that no pretext arising from religious opinion shall ever produce an interruption of the harmony existing between the two countries..."

More than 200 years later, all the progress achieved in the realm of religious tolerance by the first generation of Americans is in danger of being wiped out by ignorant fanatics who are not good enough to shine their shoes. That danger arises even as the number of non-Christians has risen to record highs. The irony is that the true iconoclasts throughout Christian history would have recognized Judge Moore's two-ton behemoth for what it is: a graven idol.