The pope and his made-for-TV papacy did more for the world at large than for his own church. But the cameras loved him to his final act. 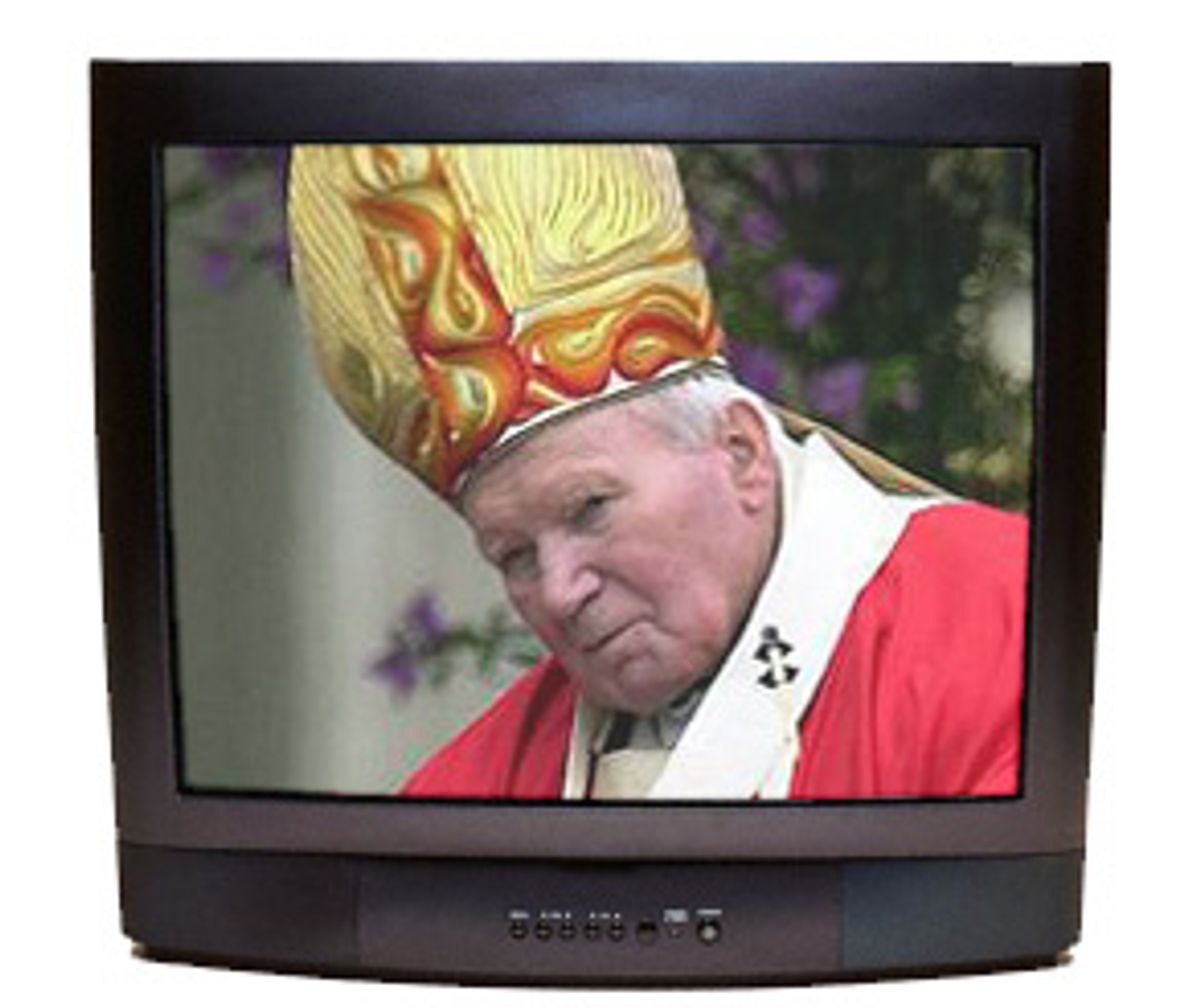 As a handsome young man, Karol Wojtyla was a playwright and an actor. In the course of his life, Wojtyla sensed as much about the role of the actor as Chaplin or Garbo or Winston Churchill. He was one of the great theatricals of the century. During the final years of his role as Pope John Paul II, he lost a great deal of control of his person, but he never lost control of his performance, or of the attention of his audience.

No one is a pope through and through. It is a role to be played in any of several ways. Karol Wojtyla took the role in a robust way, manly, more warrior than ascetic; never fussed with his skirts. He played the pope for the age of television, and fully one-half of the people alive on the Earth remember no other in the role. Cardinals and diplomats as stage supernumeraries; the planet his audience. He seemed never without an intuition of the camera. Kissing the tarmacs of airports!

Puritans, who do not trust the value of the theatrical, scorned the pop vulgarity of some of the trappings of his papacy -- the "pope-mobile," for example. It didn't matter. The pope-mobile served him, as did the pop music, the lights, the robes, the staging -- religious convocations modeled upon rock concerts. Indeed, the other night, Peter Jennings said of him, "He is not only the pope, he is a rock star." Jennings, of course, meant superstar -- the concept formulated by the pope's fellow Slavic genius, Andy Warhola.

The pope was famous everywhere. John Paul was a much better pope to the world at large than he was to his church. He was such a vast contradiction, this fiercely conservative pope (within his own church) who was also a liberal regarding the affairs of the world.

We knew John Paul was critical of Jesuits in Latin America (we saw him wag his finger at an offending priest on camera) for confusing the mission of the church with politics. We must set that example alongside John Paul's own astonishing role in undermining the Soviet Union's grip on Eastern Europe.

The anti-totalitarian pope worked within the Vatican to centralize his own power. He silenced dissident voices within the clergy as efficiently as any dictator.

The church flourished under his patrimony, especially in Africa and Asia. The church suffered and repined under his paternalistic rule, especially in Western Europe and North America. Indeed, he was a more effective pope to the Third World than to the materialistic and secular West; much more at ease in his televised meeting with Castro (a man who smelled like a man, in a country that smelled like a country), than he was with Clinton or Bush.

Like the shrewdest of modern celebrities, he fully comprehended the uses of the curtain. He did not grant interviews. He never responded to questions from journalists. He spoke when he wanted to speak. When he spoke, there was silence.

He understood better than any of his pop rivals -- better than Jagger or Bono -- that the young are in pain for lack of hope. He addressed young people seriously, never pandered. But neither did he spook them; they drew near.

During his reign, as more and more churches in Europe emptied and slipped into museum status, Pope John Paul II looked to the South to find the future. He brooded over the advance of Islam into Europe and the spread of evangelical Protestantism in Latin America.

He defended the world's poor at the conferences of international foundations, and from first-world leaders who imagined birth control to be the answer to the poor's ills. He defended the sanctity of work, of every sort of work. He criticized capitalism.

He enchanted stadiums full of believers and nonbelievers. He disappointed more nuns and priests and Vatican II Catholics than the secular press ever reported or understood.

He could not reverse the declining numbers of men entering the priesthood -- even in Ireland, the seminaries emptied. A priest friend of mine believes John Paul would sooner have watched the church fall down around him than ordain women.

He criticized the West. He spoke out against abortion and birth control and homosexuality. And yet, when sexual scandal in the rectory was exposed in Europe and North America, this pope was silent. The theologically conservative bishops he had appointed proved themselves incompetent and worse, moving molesting priests from parish to parish, then covering up their mistakes, then selling off parish properties to meet court settlements.

And after 40 years of Vatican II blather -- You are the church, this is your church -- the contraption of the church slammed shut in our faces. The bishops would take no advisement on the matter. When former Oklahoma Gov. Frank Keating, the chairman of a national investigative committee on clergy sex abuse, accused the hierarchy of obfuscating, he was replaced.

As pope to the world, John Paul II spoke words of apology: to Jews for the church's anti-Semitism; to the Islamic world for the excesses of the Crusades. He apologized for the persecutions of Martin Luther and Galileo and the forced conversions of Indians in the Americas.

In her last decade, when her famous legs failed her, and her famous beauty was all unstrung, Marlene Dietrich hid herself from the sight of the world in her Paris apartment. She foolishly attempted to protect her role from her humanity.

Pope John Paul II was a cannier theatrical. He was willing to portray himself even in suffering, to the bitterest end. He showed the world what it means to be old and dying. Ecce homo. Even when he was dragged in on a wagon, drooling, he found the spotlight. The only comparable public suffering I can think of was that of another anointed superstar, Princess Diana.

The pope's last stage was his bedroom window, a perfect proscenium: The curtain opens. The old man is wheeled into the light of the open window to utter a benediction -- his arm flailing uncontrollably, clutching his forehead in a simian gesture, his mouth opening and closing in tortured silence. The microphone is quickly withdrawn. The curtain begins to close as the figure recedes.

Here was Lear; here was Olivier; here was Samuel Beckett; here was life as theater, here was something more real than anything we see on a public stage -- real suffering. When word of his death was broadcast, the crowds gathered in St. Peter's Square, at first hesitated in silence and then began to applaud -- that ancient Roman gesture under that mild Roman sky. The applause continued for more than 10 minutes.

Even those of us who harbored misgivings and bitterness in our souls concerning the state of our church could, in the face of his extraordinary understanding of his role, claim this old actor, and join the prayer: Bravo.