Did Clinton play the gay card? 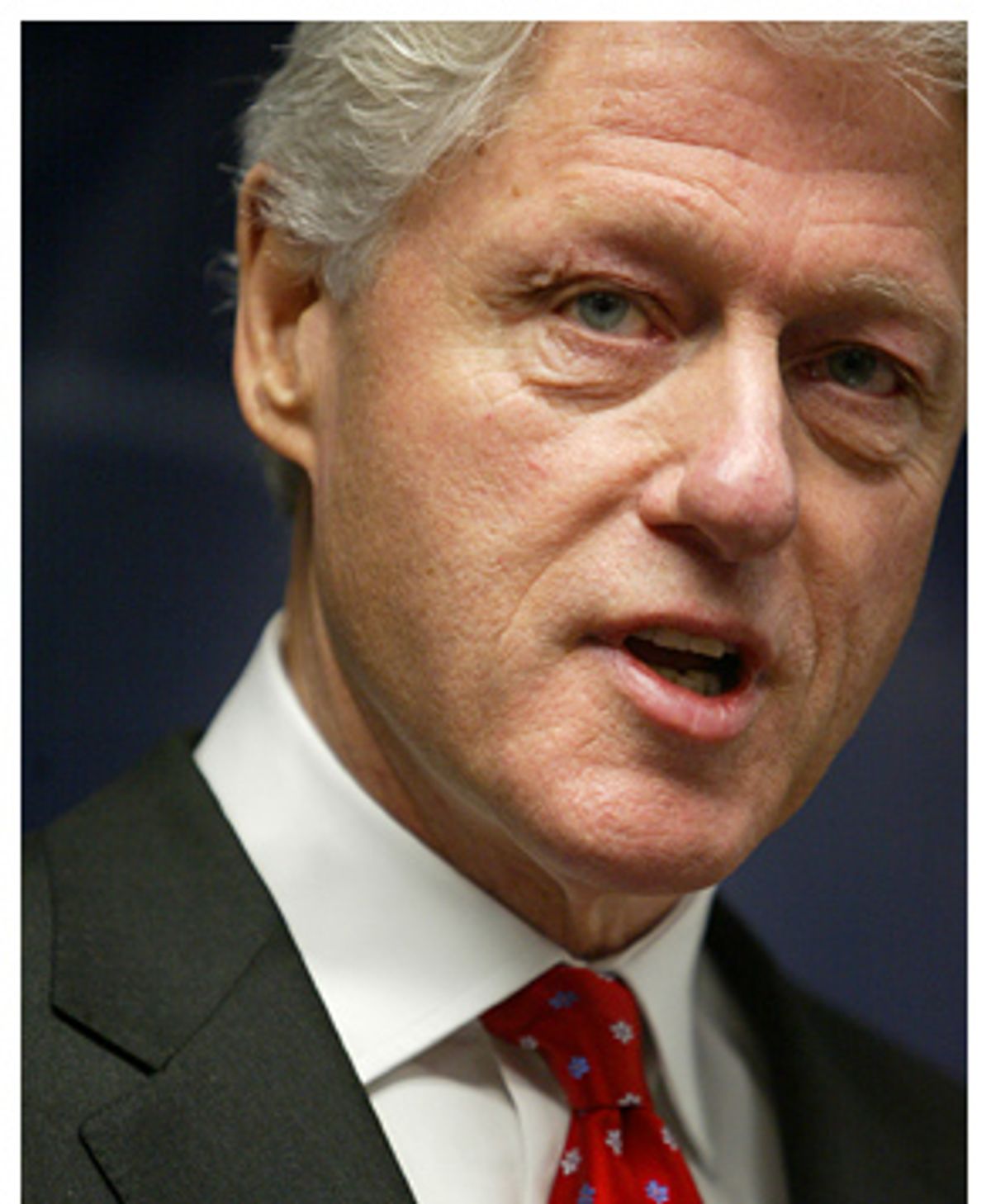 There is nothing particularly endearing about Arthur Finkelstein, the reclusive Republican political consultant who has been the dark force behind some of the slimiest characters in the GOP, including Jesse Helms and Al D'Amato. But when Bill Clinton attacked Finkelstein this week -- a clumsy, personal attack that some conservatives are calling beyond the pale -- you might have been forgiven for feeling sympathy for the Republican fixer. At the very least, you might have felt your blood boil over Clinton's apparent willingness to abandon his principles in the service of political expediency.

Clinton's attack on Finkelstein occurred Monday at a Harlem press conference to announce his initiative to deliver AIDS drugs to children in Africa. Clinton was asked what he made of Finkelstein's plan to launch a multimillion-dollar, Swift Boat-style ad campaign to derail Hillary Clinton's 2006 Senate reelection campaign, and stop her likely run for the White House in 2008. Clinton answered by referring to another bit of recent Finkelstein news -- reports that Finkelstein, who is gay, had legally married his partner.

"I was sad," Clinton told reporters. "I mean, there were two stories. One is that he went to Massachusetts and married his longtime male partner, and then he comes back here and announces this [anti-Hillary campaign]. I thought one of two things: Either this guy believes his party is not serious and is totally Machiavellian in its position [on gay rights], or you know, as David Brock said in his great book 'Blinded by the Right,' there's some sort of self-loathing or something. I was more sad for him."

What's puzzling is why Clinton, in answering a question about politics, decided to highlight Finkelstein's sexuality and psychoanalyze his possible motives (Clinton's office did not respond to Salon's inquiries). His comments could have been an awkward way of pointing out the hypocrisy of some in the GOP, in much the same way John Kerry went out of his way to mention Mary Cheney's sexuality in his last debate with George W. Bush. Clinton could also have been riffing on the tension between Finkelstein's personal life and his public persona; it is, after all, genuinely difficult to understand someone like Finkelstein, who works for a party that wants to constitutionally prohibit his way of life.

Still, Clinton's comments -- especially his claim to feel "sad" for the "self-loathing" Finkelstein -- were not meant to be philosophical. Clearly, they were personal.

"You can't call someone 'self-loathing' and not have it be an out-of-bounds personal attack," says Kieran Mahoney, a consultant who has worked closely with Finkelstein in New York state politics. "How he can do that and masquerade as tolerant is beyond belief." Clinton, of all people, Mahoney points out, ought to be careful about comparing what someone does on the public stage to what he does in his bedroom (or, as it happens, the bathroom outside his Oval Office). "I think this guy, for the sake of political expediency, would cast aside any belief he's got in a heartbeat. To his credit, he has absolutely no shame."

Righty bloggers have been even more critical of Clinton. Many say that the former president seemed to have been suggesting that Finkelstein is attacking Hillary not because he hates her politics, but because he's confused about his own sexuality. This, says James Taranto of the Wall Street Journal, is plain old-fashioned "gay-baiting."

It is possible to give Clinton the benefit of the doubt, as some gay-rights groups do. John Marble of the Stonewall Democrats, a Democratic gay-rights group, says that he was simply confused by Clinton's comments; he didn't see anything terrible in them, he says, because he just didn't know what Clinton was getting at. But as Christopher Barron, a spokesman for the Log Cabin Republicans, points out, Clinton has a long history of using sexuality as a tool to further his own political ends, and Clinton's position on gay rights in general leaves a lot to be desired.

During his 1992 campaign, Clinton promised to allow homosexuals to serve in the military. But when he took office in 1993, he introduced the discriminatory "Don't Ask, Don't Tell" policy. Then, shortly before Election Day in 1996, he signed the Defense of Marriage Act, which allows states to refuse to recognize gay marriages granted in other states. According to Newsweek, which was allowed special access to John Kerry's presidential campaign, Clinton even suggested that it wouldn't be a bad idea for Kerry to support state bans on gay marriages. (Kerry ignored his advice.)

Despite Clinton's record, gay-rights groups have been largely unwilling to criticize, or even comment on, Clinton's attack on Finkelstein. The Human Rights Campaign, the nation's largest gay-rights group, did not respond to Salon's repeated inquiries. Roberta Sklar, a spokeswoman for the National Gay and Lesbian Task Force, a grass-roots organization that fights for gay rights at the local and state level, declined to comment on the case, explaining she isn't familiar with what occurred.

The most critical thing that the Stonewall Democrats' Marble was willing to say was that all personal attacks in politics, including Clinton's, are regrettable. Marble adds that he doesn't think that being gay and Republican means you are self-loathing, although he says he could understand what Clinton could have meant.

"I was an anti-gay activist before I came out," Marble says. "I've known a lot of people who are activists on the right -- on the far right -- who do have a self-internalized homophobia. But of course not everybody is there because of that. Some people might have principled political convictions."

Incidentally, there are more than a tiny number of gay people who vote Republican. According to exit polls, George W. Bush received 25 percent of the gay vote during the 2000 election. In 2004, after he'd voiced support for a federal ban on marriage, 23 percent of gay voters chose him over Kerry.

Ordinarily, Clinton's comments wouldn't matter too much in the current political debate; much of what a former president says isn't relevant to current affairs. But Clinton is not only a former president. He's a close political advisor to a possible future president and his comments have a particular political resonance, especially as Hillary Clinton's position on various gay-rights issues is also in doubt.

Sen. Clinton's position on gay rights came under scrutiny on Jan. 19, when she traveled to Boston to speak at a fundraiser for two "faith-based" youth-outreach organizations headed by Eugene Rivers III, a minister and strident opponent of gay marriage. Rivers, who is black, opposes gay-rights groups' use of the term "civil rights" to describe their fight; as the Village Voice has reported, Rivers regards homosexuals more as sinful hedonists than as a group whose rights are being violated.

A week before the fundraiser that Clinton attended, Rivers said in a speech: "Frequently, same-sex couples wanting to marry are white lesbians who seek the accoutrements of family life and the proverbial white picket fence. From their positions of socioeconomic privilege, they insist that their desires must be viewed as rights instead of preferences." Sen. Clinton's appearance at Rivers' fundraiser prompted criticism from some gay-rights advocates. In a letter to the Boston Globe, Sean Cahill, a policy director at the National Gay and Lesbian Task Force, called her appearance "disturbing."

Clinton's decision to endorse Rivers' work is of a piece with her recent political calculation. As her husband did before her, Hillary is skillfully mining centrist political ground in search of her political fortune. In the same way that she's reached out to conservatives on abortion, the speech at Rivers' group was a way of signaling that she's at least open to other views on social issues.

Rivers, who is a Democrat, says that he thinks Clinton's strategy is clever. "She doesn't share my view on gay marriage or gay rights, but we didn't talk about it because that was not the reason she was there," he says. He adds: "I think what Hillary Clinton actually wants is a more open-ended, less-polarized discussion of the issues. She understands you are not going to win presidential elections by taking a hard, non-negotiable line on these issues [such as gay marriage]. You might be elected president of San Francisco, or you can be president of the lower east side of Manhattan or of Paris, France, but you're not going to get elected president of the United States."

By all accounts, Bill and Hillary Clinton are personally very accepting of homosexuals. Paul Parish, dance critic at San Francisco magazine, who was a Rhodes scholar with Bill and is still a close friend, says that Clinton was one of the first people he came out to. The president, in Parish's description, is an empathetic, humanistic fellow who understands the difficult lives gay people face. Clinton's genius, Parish says, is in not making himself a single-issue politician -- he would never have gotten elected if he'd been more emphatic about gay rights during the '90s. The best that politicians like Clinton can do is build a bridge toward equality, uniting the country behind a common agenda. Many gay people, Parish says, understand this; like everyone else, they too don't vote for politicians based on only one issue.

There is nothing wrong with being open to the middle-ground position on tough social issues like gay marriage or abortion, and Bill's -- and now Hillary's -- political nimbleness sure does win elections. Still, the Clintons' positions on these things -- and especially what looks like their willingness to trade in their principles for political wins -- do leave you wondering about their motives.