Nailing the Hammer? Not so fast

Tom DeLay's ethical rap sheet is longer than the list of boys who have shared Michael Jackson's bed. But the new GOP line is "He hasn't done anything wrong." 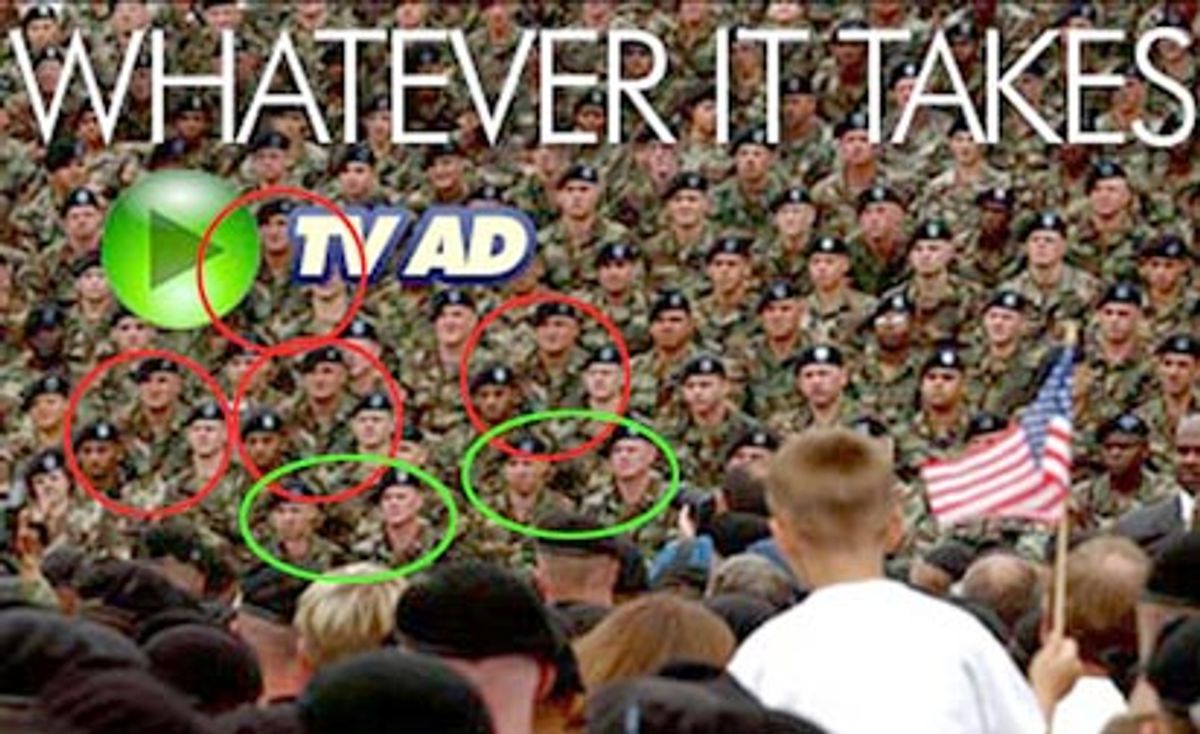 The Hammer was in a steely mood this weekend. Moments before brandishing a rifle over his head, embattled House Majority Leader Tom DeLay told a crowd of gun lovers at the National Rifle Association's annual convention, "When a man is in trouble or in a good fight, you want to have your friends around -- preferably armed."

The NRA members, who had paid $75 to dine on sirloin steak with peppercorn cognac sauce and hear DeLay wax romantic about firearms -- "If you want to empower women in America, give 'em a gun" -- responded with thunderous applause. I wouldn't be surprised if the judges in the Terri Schiavo case, who DeLay had said would have to "answer for their behavior," responded by running out to buy bulletproof vests.

Among the friends gathering round DeLay is Rep. Roy Blunt, the No. 3 Republican in the House, who appeared on "Meet the Press" to defend his colleague the morning after DeLay's NRA speech. No word on whether Blunt was packing heat. But his performance marked a new low in the GOP's "see no evil" approach to their man Tom.

"These stories, I think," responded Blunt, far from bluntly, "are all based on some facts and lots of things that aren't factual." This led a clearly exasperated Russert to ask: "Has he done anything wrong?"

The answer came back: "My impression is he has not done anything wrong."

So is this the latest official GOP line on DeLay? First we had: "The liberal, anti-Christian media are out to get him." Then we had: "Everyone is doing it" (aka "Look at Hillary and Pelosi and Bernie Sanders!"). Then came: "Hey, we're all human, everyone makes mistakes, let's get on with more important issues -- like getting rid of the death tax."

But, nope, forget all that. Too subtle. Too nuanced. Too 1998. Now we have: "He has not done anything wrong." If it weren't so repugnant, this kind of loyalty would be inspiring.

Unfortunately for Blunt -- and of course for DeLay -- the majority leader's ethical rap sheet is longer than the list of prepubescent boys who have shared Michael Jackson's bed. It's a profusion of unprincipled line-crossings and shady dealings. A primer on "How to Play the Washington System for Fun, Profit and Political Power."

And it's left DeLay's foes far better armed than his friends. Their weapon of choice is the Joe Friday special: just the facts, ma'am.

These facts start with dodgy fundraising tactics, take a long detour through Russia, Britain and South Korea on lavish trips paid for by lobbyists, stop for a beer with seedy pals like Jack "Indian Taker" Abramoff, include the misuse of a federal agency for political advantage, and plow through the familiar Beltway muck of nepotism and the funneling of campaign money into the pockets of family members. All in a day's work for the former pest exterminator from Sugar Land.

But of all DeLay's transgressions, the one I find most repulsive is the way he has shamefully -- and shamelessly -- used charitable organizations to fill his political coffers and boost his political clout.

DeLay's preferred mechanism for gathering donations is something called the DeLay Foundation for Kids -- a charity that conveniently allows lobbyists and corporations to buy access to DeLay and his GOP cronies without having to deal with those pesky campaign-finance laws. For instance, at a 2003 fundraiser for the DeLay Foundation for Kids, a celebrity golf tournament held at the Ocean Reef Club in Florida, corporate sponsors were afforded the opportunity to play golf with key Republican lawmakers like DeLay and his ol' buddy Roy Blunt -- all nominally in the name of a good cause.

And, because the DeLay Foundation for Kids is a charity, not a political fundraising entity (wink-wink), donations to it are unfettered by campaign-finance restrictions -- the sky's the limit on the amounts that can be donated. So while the lobbyists and corporate mendicants get to hit the links and bend the ear of a congressman or senator, their cost is entirely tax deductible as a charitable donation. And, as a bonus, the names of the donors or the amounts they give don't have to be made public. Not surprisingly, the Ocean Reef event (and many others just like it across the country) was a sellout -- in more ways than one.

The personal charity fundraising scheme is as cynical as it is corrupt. And that's being charitable. For DeLay and his hard-right, shrink-the-government crowd, charity is not a little extra something to help those in need make ends meet. It is what, when that golden day dawns and the governmental beast is finally starved, is supposed to fill the void -- the very fabric of the post-Big Government social safety net.

So you'd think it would be sheltered from their rapaciousness. But when it comes to raking in the cash, clearly nothing is sacred for DeLay. Not even compassion.

Given this litany of scandal and mendacity, it's easy to see why virtually every major progressive group is pushing to oust DeLay. But do they really want to lose him? As Rick Hertzberg puts it in the current New Yorker, Democrats might want to keep DeLay around "because he is so repellent. Self-righteous, humorless, resentful, scowling, perpetually angry, he has many of the irritating qualities of his former colleague Newt Gingrich without any of the latter's childlike charms."

Nail the Hammer? Not so fast. I say put him to work. A charmless Gingrich with a giant bull's-eye on his back could be just the tool Democrats need as they are rebuilding their party for 2006.