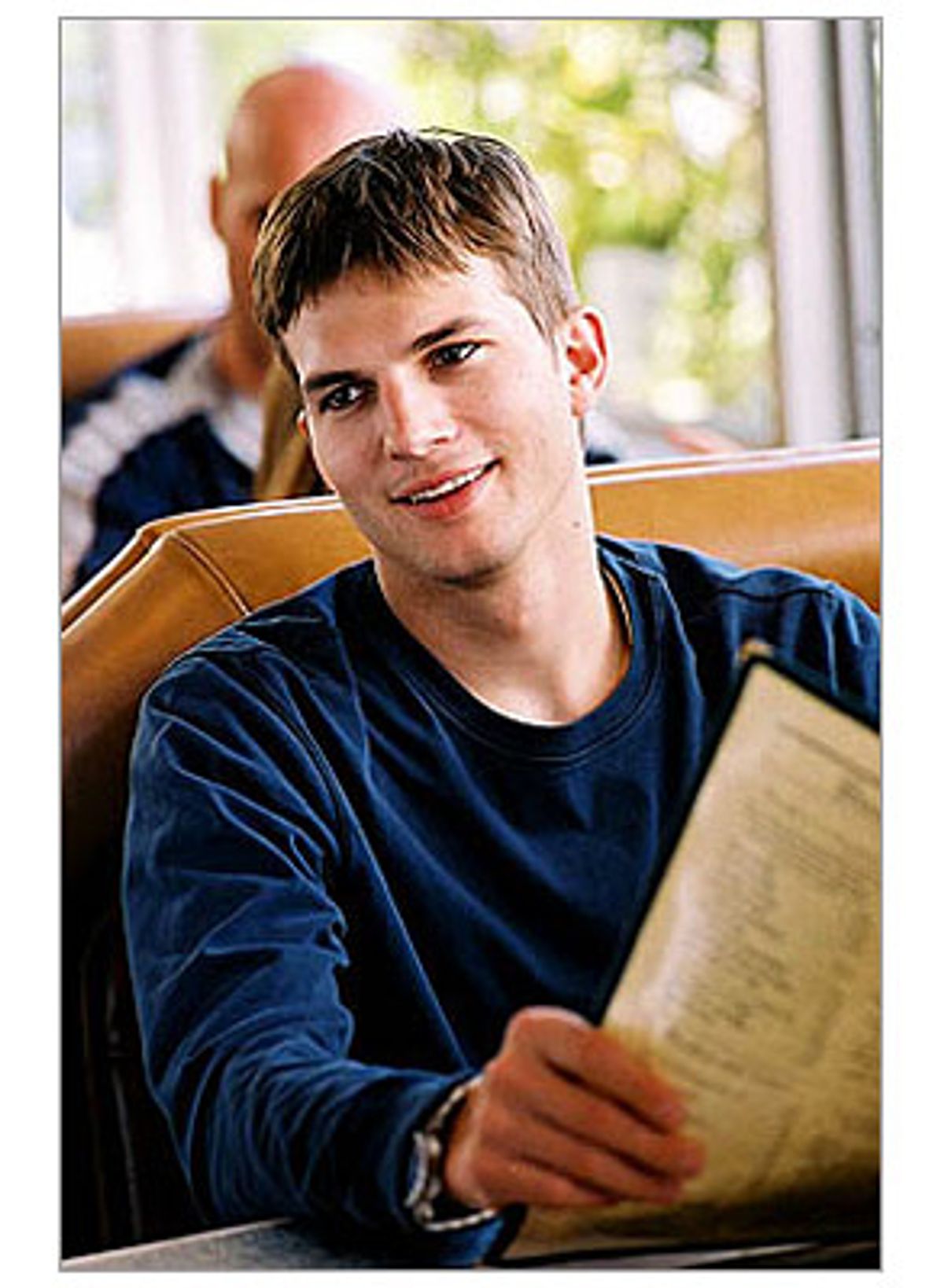 I can't figure out what my 82-year-old mother sees in Ashton Kutcher. She watches him faithfully on "That 70s Show," which is where she discovered him a few years back. Not long before that, she'd announced that her previous crush, Harrison Ford, was "too old" for her; she does tend to like them young, God love her, and apparently, Kutcher fit the bill.

My mother doesn't watch "Punk'd" -- she's responding to some schoolboy sweetness she sees in Kutcher, and I think she knows that reckoning with Kutcher as a practical joker in a backward trucker cap would spoil the illusion. But she makes it a point to see all of Kutcher's movies, even "The Butterfly Effect" (which she hated, but she has no one to blame but herself: She was duly warned). I think she even found something to like in "My Boss's Daughter," but I can't remember what.

Though my mother may not fit the Ashton Kutcher fan-base demographic (jokes of his appeal to certain older women aside), she apparently isn't the only one who can't get enough of him. He's shown up in two movies within the past two months: First the haplessly misfiring "Guess Who," and now the dim-bulb romantic comedy "A Lot Like Love" (which was directed by Nigel Cole, who gave us the mild, sweet-tempered comedies "Saving Grace" and "Calendar Girls"). In "A Lot Like Love," Kutcher and his costar, the fearsome Amanda Peet, play lovers who are barely friends, or maybe it's the other way around. First, Peet makes goo-goo eyes at Kutcher in an airport; then she accosts him in the airplane bathroom (he emerges with a doofy smile on his face). The plane is headed from Los Angeles to New York, and once it lands, Peet wants nothing to do with this gangly, innocent-looking pup. But the two meet again by chance on the streets of Manhattan, where they spend a day clowning around and taking photographs. Then, once more, they part: They don't see each other again for several years.

The rest of the movie is taken up with the ridiculousness of their reconnecting here and there over the next seven years, only to be torn apart by misunderstandings, circumstance or, most often, their own stupidity. This is the kind of movie where the lovers don't have to worry about fate keeping them apart -- all they do is manufacture excuses not to be together, because if they didn't, you wouldn't have a movie. "You live in a city that's 300 miles away!" "I can't accept that you didn't make the first move!" "I'm seeing somebody, kind of!" -- that sort of thing. And it's very hard to see what could hold them together in the first place, other than a shared penchant for sticking long, slender items -- drinking straws, the stems of sunglasses, what have you -- up their noses, which they do with alarming regularity.

Peet, like Kutcher, has been working a lot these days -- she showed up most recently in the Woody Allen mini-disaster "Melinda and Melinda" -- though it's a bit hard to say what her possible appeal might be. Peet always seems to be more taken with her charms than with anyone else who's on-screen with her. What's more, she has a lot of teeth: It's simply a feature of her face, and there's not a lot she can do about it. When she laughs, you get the full effect of those teeth -- this is a veritable cavern of choppers -- but even then, some people like that sort of thing. But when Peet laughs at her own jokes, as she frequently does in "A Lot Like Love," her teeth seem to be method-acting -- they're all over the place, tremendously pleased with themselves and clamoring for our attention (as if they needed to). Peet works so hard that it's wearying to watch her.

Kutcher may be a little intimidated by those teeth, and you couldn't blame him. But at this point, Kutcher has had enough chances to prove himself that it's unfair to blame his lack of movie-star presence on anyone else. The big screen doesn't seem to like Kutcher much, or even to get him, whatever there is to get. The small screen is, possibly, just big enough to hold him, and he has definitely benefited from smart casting: I've caught only occasional glimpses of "That 70s Show," but I'm always struck by how much Kutcher resembles the boys of my youth -- those sleepy-eyed guys with grown-out feathered hair and ringer T-shirts, guys to whom you were never sure exactly what to say, but only because you barely knew what to say to any boy. Kutcher may not throw off anything so well-defined as a spark, but he does seem to have a sly glow -- a glow that's maybe even more apparent on "Punk'd," where he puts himself out there as a mischievous, vaguely obnoxious yobbo and doesn't ask us to see much more than that.

In Kutcher's movie roles, though, it always seems as if the camera is scanning his face desperately for something that just isn't there. With his flawless skin and alert eyebrows, he certainly can be considered beautiful, and although that might be enough to hold our interest, it isn't quite. (Kutcher seems to be somewhat aware of his own limitations. He recently told "Access Hollywood" that he'd bet a buddy that if "A Lot Like Love" hit No. 1 at the box office in its opening weekend, he'd sign on to model underwear for Calvin Klein.) The characters Kutcher plays always seem smeary and vague, which is at least partly the result of bad writing. But Kutcher is so laid back as an actor that it often seems he's simply waiting for the character to come to him, rather than doing the work of coaxing it into being. Kutcher's charm has a "See you later!" quality -- you keep waiting for it to kick in, and occasionally, it does: In "A Lot Like Love," he has a scene in which he's introducing Peet to his deaf brother (played by Ty Giordano), and, forgetting that she can hear, he continues signing even as he's talking to her. Kutcher gets carried away by the moment, and we do too: It's far and away the liveliest, most believable bit in the movie.

Mostly, though, when I see Kutcher on the big screen I find myself scrutinizing him, feeling vaguely attracted and yet ultimately deciding it's not worth the bother of falling for him. Generally, modestly talented actors like Kutcher -- his "That 70s Show" co-star Topher Grace, for instance -- are better off when they're breezy and casual and don't try to pull off anything too complicated. But Kutcher is so offhanded, he nearly slips off the screen. The tricky bit is, it's hard to actively dislike him: I always walk away from a Kutcher movie thinking that he probably wasn't quite as bad as I thought. No matter what my mother thinks of him, I'm largely immune to his charms -- and yet still, I find myself giving him the benefit of the doubt. I've seen him on the big screen enough times to know better. Maybe his biggest talent is the way he punks you into thinking there just might be something there.