Why were we forced out of Bush's Social Security talk? And why won't the White House identify that fake Secret Service agent who stopped us? 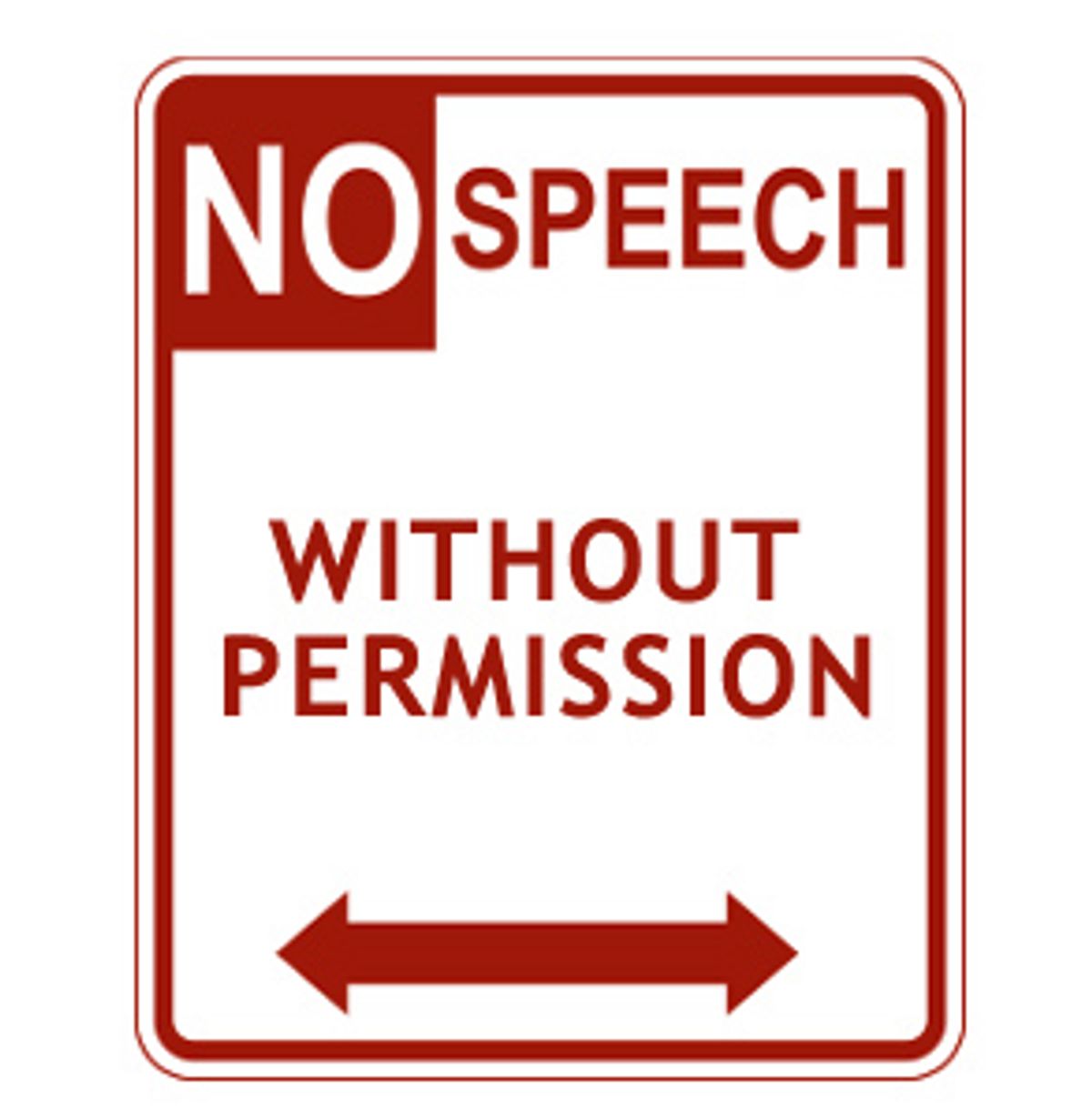 Just over a month has passed since two friends and I were forced out of President Bush's town hall-style "conversation" in Denver about privatizing Social Security. Despite the support we have received from elected officials in our request for answers from the White House regarding this incident, Karen Bauer, Alex Young and I still await a satisfactory explanation of why our First Amendment rights were violated.

I did not vote for Bush in the last election, but I was looking forward to participating in this historic occasion. It would be my first time in the presence of a sitting president, and I wanted to hear more about his plans to alter the Social Security system.

At the entrance to the March 21 event, a man wearing an earpiece and lapel pin was presented to us as a Secret Service agent. After Karen and I were told that we had been "ID'd," this man threatened us with arrest several times before stepping aside and allowing us to enter. (I asked if I was on some sort of list but received no response.) Before I'd had much chance to worry about what it meant to be ID'd by the Secret Service, the man with the earpiece was back to demand that we leave.

As he aggressively moved the three of us toward the exit, we kept asking why this was happening. He simply replied that it was a "private event" and we had to leave. An unknown person then led us outside, where we were surrounded by a group of law enforcement agents and other people who repeated that we needed to leave. Intimidated and embarrassed, and getting nowhere with our attempts to reenter the event or get an explanation, we walked back to my car and drove away.

Some questions have been answered since that day. We now know that, despite holding valid tickets and being properly dressed, Alex, Karen and I were removed from the event because of the message on a bumper sticker on my car: "No More Blood for Oil." This detail was revealed during a telephone conversation with the Secret Service the day after the incident. A week later, in a face-to-face meeting, the Secret Service also informed us that the man who had removed us was not an agent but a "Republican staffer" on the host committee responsible for managing security. They would not disclose his identity to us, however.

What's more, we have confirmed that the president's Social Security "conversation" was not a private event but, rather, a taxpayer-funded public event open to anyone with a valid ticket. While all this information is telling, as a tax-paying, law-abiding citizen with the right to peacefully express an antiwar statement on a bumper sticker, I believe I deserve more answers. Specifically, who is this person who represented himself as a Secret Service agent empowered to use physical force? Further, who was giving instructions to him and his cohorts?

Most important to me is getting an answer as to why this happened to us. Are citizens who oppose the Iraq war less entitled than those who support it to engage in a dialogue about Social Security -- or any other issue about which Americans need to hear all sides to make informed decisions?

Why are our rights of free speech and assembly being so blatantly violated? And why are other potentially illegal acts -- improper force, unreasonable seizure and Secret Service impersonation -- being allowed and perhaps even encouraged? Could it be that the administration has something to hide, that it is carefully weeding out potential dissenters because they might expose flaws in its Social Security agenda?

Ours was not an isolated incident. In Tucson, Ariz., on the same day, Steve Gerner was denied entry to an event featuring the president because he was wearing a Democratic Party T-shirt. The college student offered to remove his shirt but was told he was a "risk" and could not enter. And in Fargo, N.D., 42 people, including city commissioner Linda Coates, found themselves barred from obtaining tickets to a February speech by Bush. Their crimes? Being affiliated with the wrong party and writing letters to the editor critical of the Bush administration.

On March 29 and again last week, the press questioned the administration about the Denver incident. (We've now become known as the "Denver Three.") The White House responded that a "volunteer" had acted out of concern that we would disrupt the event. Yet since we did not in fact do anything disruptive, does this mean that the administration is authorizing volunteer thought police to preempt free speech, despite having assured the press that it "welcome[s] a diversity of views at the events"? In any case, it remains unclear why volunteers were charged with the primary responsibility for the security of a presidential event.

The bipartisan support we have received speaks to the seriousness of this matter and what it represents to all Americans. Among those who have spoken out against the treatment we endured are Colorado Republicans Sen. Wayne Allard and Reps. Bob Beauprez, Marilyn Musgrave and Tom Tancredo; Sens. Byron Dorgan, D-N.D., and Kent Conrad, D-N.D. (writing to the U.S. attorney general and treasury secretary); Rep. Earl Pomeroy, D-N.D. (writing to the director of the presidential advance team); Sen. Ken Salazar, D-Colo. (writing to the Treasury Department's inspector general and a district attorney); Rep. Henry Waxman, D-Calif. (writing to the Government Accountability Office about taxpayer funds spent on promoting Bush's privatization agenda); Reps. Diana DeGette, D-Colo., and Raúl Grijalva, D-Ariz. (writing to the House Committee on Government Reform); and Rep. Mark Udall, D-Colo. (writing to White House chief of staff Andrew Card).

On April 19, Udall received what he considered an inadequate response from Conrad Everett, deputy assistant director of the Secret Service. In his reply, Udall wrote: "While I am relieved to know that the Secret Service was not engaged in a partisan purpose, I am still interested in knowing the identity of the individual involved, and more importantly, what your department did, if anything, to determine whether this person unlawfully posed as a law enforcement official." He continued, "If you cannot identify the person involved, I would like to know what provision of law prevents you from doing so." Meanwhile, the request for an investigation by our attorney, Dan Recht, in a March 30 letter to Attorney General Alberto Gonzales, has not yet received a response.

Notably, last week the White House changed its label for these events from "town-hall conversations" to "invitation-only, round-table discussions." Is this meant to better assure the administration that the "diversity of views" represented includes only people who sport the correct messages on their bumper stickers?

We cannot allow our freedoms to be privatized in this way. If we lose the fundamental right to express our opinions freely, all other rights will be meaningless.

Leslie Weise has worked as a high-tech lawyer for Silicon Valley companies and is currently pursuing a master of law degree at the University of Denver. She is also a registered patent attorney.