The interview that Viacom wants the whole world to watch -- leaked here! 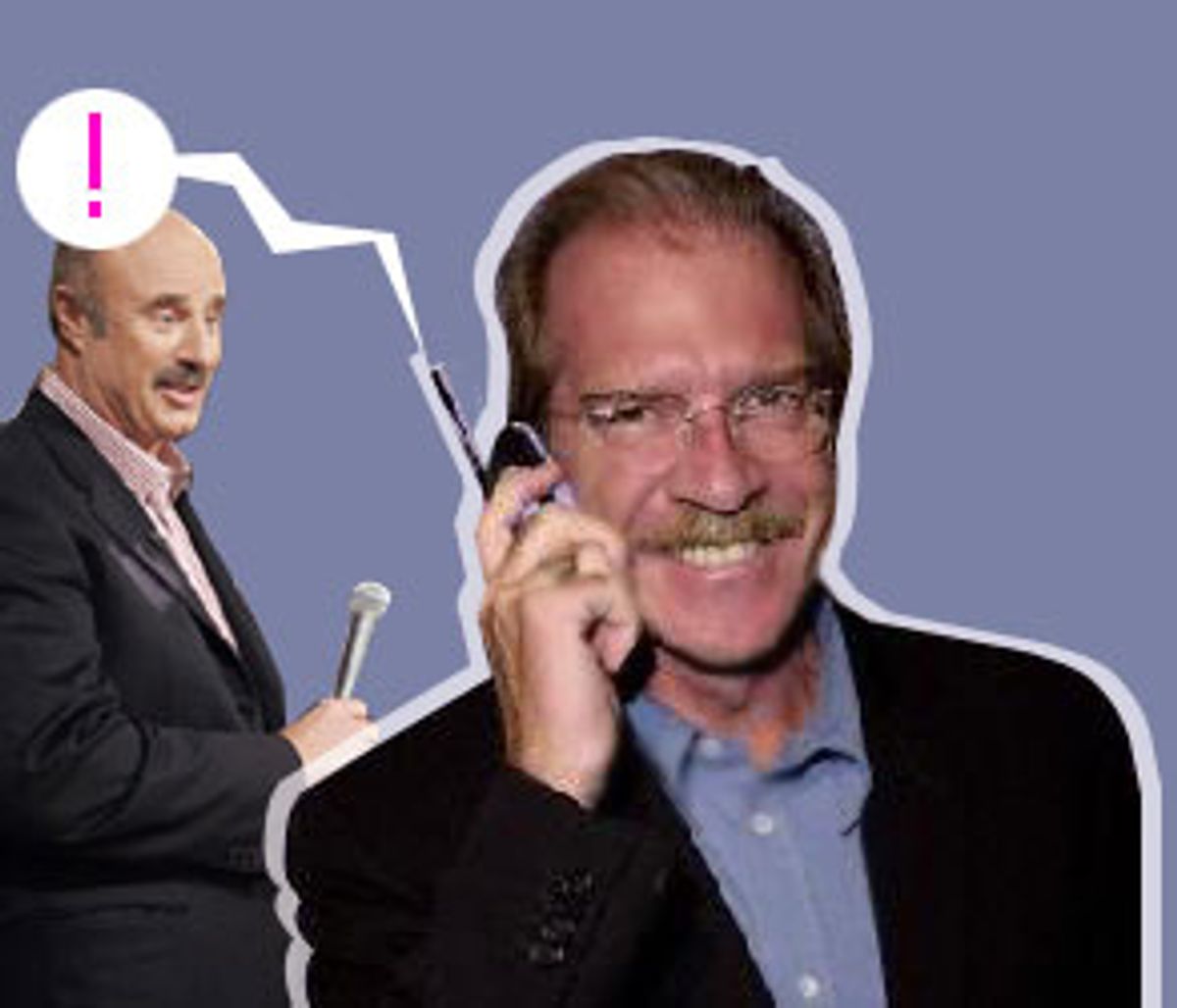 Viacom-owned CBS will air an interview Wednesday between Viacom-owned TV star Dr. Phil and Viacom-owned TV flack Pat O'Brien for a prime-time special about O'Brien's month-long stint in rehab and the behavior that sent him there: an apparent bender during which O'Brien left some explicit voice mails that eventually found their way onto the Internet. Undeterred by a great cry of "Who cares?" from the American public when the interview was announced, Salon decided to get to the bottom of it. And thanks to a little sleuthing and gumshoe work, we got our hands on an in-house transcript of the interview, which is just as shocking as your powers of imagination might suggest! A snippet:

Dr. Phil: Now, first, I just want to congratulate you for just showing up tonight. As the host of "The Insider" -- a terrific TV show, I gotta add, that's on every weekday night, check local listings -- you're pretty busy, and I'm sure you're busier than ever preparing for your return to the show tomorrow night. This isn't easy for you, and obviously you could've talked to someone who would hold your hand, but you know I'm going to get real with this.

Dr. Phil: I know you want to deal with this straight up and be accountable for it so you can get back on the air where you belong as soon as possible, check local listings. And you know I don't throw softballs.

Dr. Phil: Well now, you did some things -- and I don't mean to shame you, but I'm sure a lot of people out there want to address this. And we should say right now you'll be addressing this in greater depth in the daytime tomorrow on my show, "Dr. Phil," check local listings. But you did some things that are highly offensive to the sensibilities of most Americans in general and women in particular, and I can only imagine, your wife. Now, some of you parents out there should consider making sure your little ones are out of the room, because we're going to play some recordings that are very vulgar and inappropriate. OK, can we roll the tape?

Dr. Phil: Now, Pat, how do you feel when you hear this?

Dr. Phil: I'm sure I'd feel like I was going crazy, too, after saying such vulgar and inappropriate things, more of which will be replayed on my show tomorrow, check local listings. But look, if you're big enough to leave someone a message like that, you're big enough to stand up and answer questions about it.

Dr. Phil: I appreciate that, Pat. But you know, you messed up big. You wouldn't be here if you didn't know that. I think a lot of people have lost faith in you, and they would like to know what your next move is gonna be before they tune in for your show tomorrow night.

O'Brien: Let's hire a hooker. Let's get crazy, get some coke.

Dr. Phil: Now, Pat, I want you to stop this talk. I know you're being honest, and lots of people -- including the millions of your fans who tune in every night for "The Insider" to see you and that delightful co-host of yours, Lara Spencer -- are gonna respect you for that, but this is your second chance. This is your time to own up to what you did and say that you're ready to get real and take this seriously.

Dr. Phil: Well, that's the first step, to admit it's wrong. But you do do this -- you did it. We have it on tape, and it's shocking and it's incredibly vulgar and inappropriate and we'll hear even more of it tomorrow. But you really have to own up to this. This is your last chance to own up to it, except for the chance you'll have on my show tomorrow.

Dr. Phil: So you'll own up to it, Pat? Because, Pat, I want you to make a promise to me, and to the people out there, most of whom watch your show and care deeply about you -- and care even more deeply about me -- that this kind of behavior will not continue.

O'Brien: Let's go f***in' crazy! If you agree with this, just look at me and say yes. Just wink or something.

Dr. Phil: Pat, you know I'm with you. I'm on your side, we all are. I'm really proud of you for coming here, Pat, and I'm sure your wife and your girlfriend are, too.

O'Brien: I want you badly, and I know you want me, but you have to be with Betsy, too.

Dr. Phil: Pat, I'm happy to talk with your girlfriend anytime, maybe she could come down and appear on my show with you tomorrow.

Dr. Phil: OK, Pat, we'll hammer out the details over the phone. That's all the time we have for now. Goodnight, everyone! See you on my show tomorrow -- check local listings!