Oh, Jennifer, with your new haircut and your startled-looking eyes. I was so hoping you had run off to Vegas to become a showgirl. 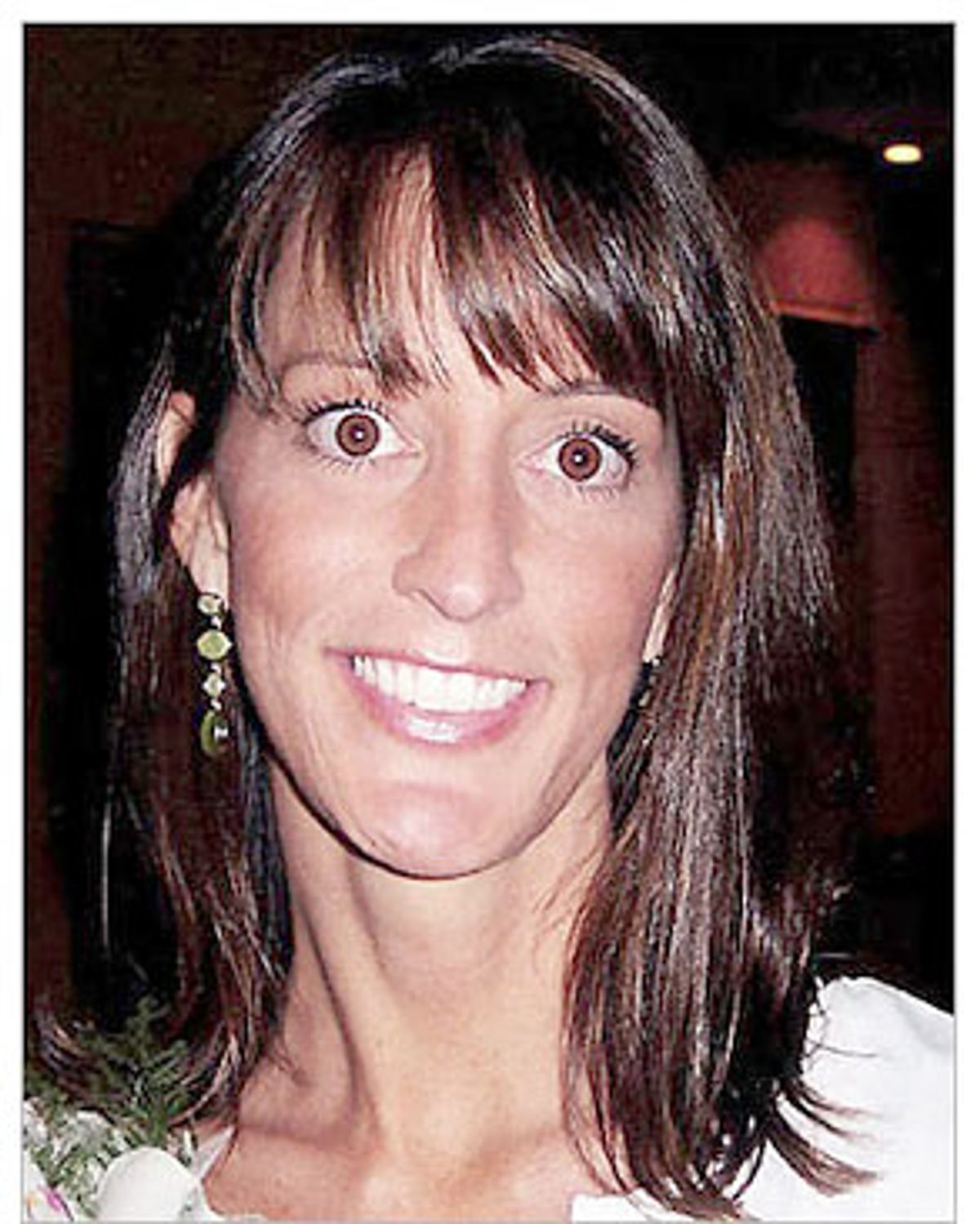 As the nation seems to be going through a nasty spate of wife-chopping and wife-drowning, it was a delight to learn that runaway bride Jennifer Wilbanks of Duluth, Ga., she of the 600-invitee wedding and the startled-looking eyes, had not been chopped to pieces by a devout but deranged husband-to-be but had merely succumbed to the ancient lure of the Greyhound bus and gone to Vegas for some alone time. You figure it was some kind of spiritual emergency. Otherwise she would have left a note, no?

Most such stories pass this observer unremarked, but there was something about this one. I was standing on a cliff overlooking the Pacific as the sun was setting, and I overheard two hang gliders talking. One hang glider told the other hang glider that if he were the groom he'd just as soon she stayed on that bus and kept on going. Those eyes, he said. Did you see those eyes? Like a deer in the headlights.

Indeed, in the absence of detail, it was the pictures we seized on first. In fact, the first thing that struck me wasn't Wilbanks herself but the remarkable resemblance between Albuquerque public information officer Trish Ahrensfield and Deputy Clementine Johnson of Comedy Central's "Reno 911." Did that mean anything? Is a busty blond in a police uniform with one little wisp of hair brushing across her forehead some kind of comedic meme peculiar to our time or to our vision of the West and the sorts of liberation it offers women?

But we wondered mostly about Jennifer, that startled expression on her half-starved face: Was it fear? Ebullience? Derangement?

Depending on who you asked (I asked the staff at Salon, who happened to be nearby; you could also ask the Table Talk people at Bridezillahead Revisited 6.0), Wilbanks' eyes said many things. They said, "I had some pre-nuptial botox!" or "I haven't had a full meal for six months! I'm very, very hungry! Please feed me!" or "I'm in a stunned fugue state that imitates a 'vivacious Southern belle' and may be completely out of my gourd, possibly permanently," or "I think that last line of speed was JUST RIGHT," or "I had a premonition last night that I am going to become a national joke" or possibly even, "If you start talking to me, you're going to wake up alone, 14 hours from now, in a bathtub full of cold water in a room you don't recognize with no clothes, no wallet, an empty bottle of Cuervo and an entire store display of Devil Dogs."

Drawn to underdogs and misfits, I was naturally on the side of Ms. Wilbanks, regardless of what her spooky eyes were saying. Surely, I thought, she must be seeking liberation, even if she doesn't have a name for it! Perhaps all she knew was that whatever she was seeking looked a lot like Las Vegas in the movies, so that's where she headed with her bus ticket and her new haircut and her striped blanket that later Ms. Ahrensfield, in a gesture of absurd modesty, would drape over her head as she guided her through the Albuquerque airport to a waiting plane home.

So while the groom stewed, the media speculated and indignant townspeople knit their brows in censorious disapprobation, I secretly wished that the Runaway Bride had gone off to become a showgirl. Just for the thrill of it, I wanted to see her go as far as she could. Go, go, go, Runaway Bride! Go as far as you can from Georgia, beyond Las Vegas to California, Oregon, Alaska, across the Bering Strait to Siberia and over the Steppes into Mongolia, China, Tibet! Go, frightened bride of the South! Run from that Bible-toting paramour with the square head, flee the harsh whisky-soaked legacy of slavery and politely simmering women, flee the pecan groves and peanut farms, flee all those Southern belles who never ring and all those good old boys who are neither all that good nor all that old! Flee! Go! Run away!

But the closest thing to liberation she could think of was Vegas, which probably means that in any meaningful sense her quest for liberation is doomed. And how, if Vegas was as far as she could imagine, would she ever explain to her Bible-thumping soon-to-be-betrothed precisely what poetic murmur in her heart had set her going on that bus, what shimmering Mirage rose out of the desert sands to haunt her still-single dreams? In short, her prospects for lucid and lasting reconciliation did not seem unalterably bright. Like Lucy Ricardo after yet another failed scheme, Jennifer Wilbanks was going to have some 'splaining to do.

Yet for four days she kept at bay the fearsome tide of custom. She made one last gesture of freedom toward the open road. Who knows what life unlived now lies stillborn on the floor of that Greyhound bus? It's not for us to say; but she made a break for it, feeble and doomed as it was.

You wonder what she'll tell her kids years from now, when those startled eyes have narrowed with the narrowing of life's possibilities and the kids dig up the clippings on the Internet and ask her what she was doing running off on a Greyhound bus when she was supposed to be getting married to daddy. Let's hope she won't just hush them up but take a moment to explain how before you do anything permanent in life you first have to stay up all night brooding in a pool hall or drinking coffee with a girlfriend or driving aimlessly about the countryside waiting for sunrise or a sign from God, whichever comes first. And if no sign appears, well, there's always that Greyhound bus leaving for Las Vegas every day at 3:23. Maybe she'll describe to them the peculiar sound of a bus at 3 in the morning crossing Kansas on the way to Nevada with a baby sleeping in the seat behind and an old man with a cardboard suitcase snoring across the aisle. Maybe she'll remember sitting there in the dark feeling like if she could just keep on riding that Greyhound bus that everything will work out in the end. Let's hope she tells them something they can use. Let's hope when they ask why she did it she puts on the Guy Clark song "Baby Took a Limo to Memphis," and shouts out the chorus along with the kids: "She did it 'cause she wanted to!"

Anyway, I hope they work things out and go ahead with the wedding. And after the wedding, if this were my movie, this is what would happen: Recognizing that people are not perfect and that spiritual emergencies occur in the best of families, he buys his new wife a present. The present is a round-trip bus ticket to Las Vegas, open-ended, good any time from now until doomsday. He puts the ticket in a glass box and hangs the box on the wall. Next to the box he mounts a tiny red hammer. Under the box he hangs a sign that says, "In case of no fire, break glass."