High gas prices are putting a serious dent in SUV sales. But don't declare our love affair with four-wheel behemoths over yet. 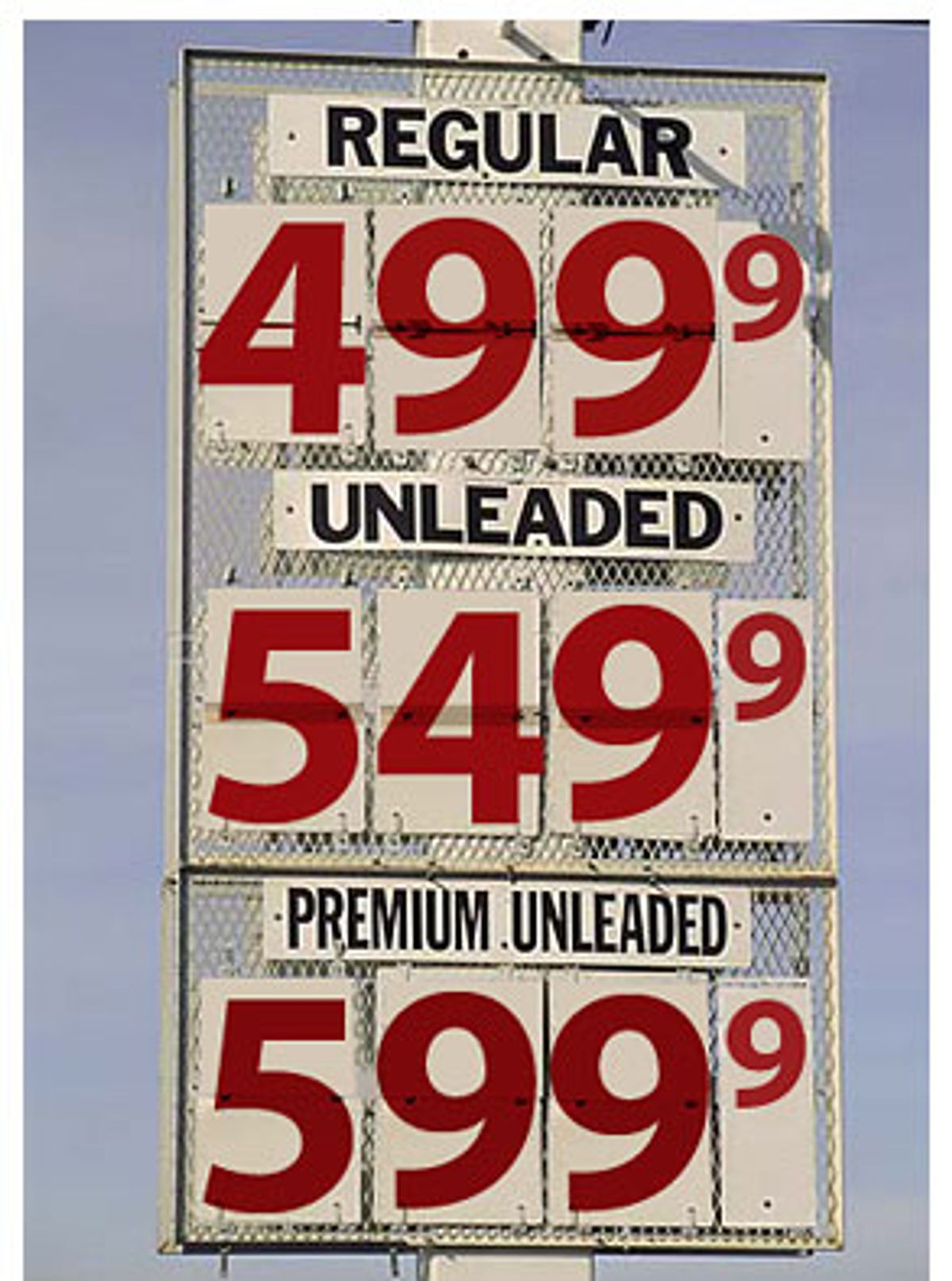 Dozens of truckers near Orlando, Fla., protested gas prices in early April by pulling their 18-wheelers over to the side of the expressway to wave signs decrying the high cost of fueling up. "Fuel price too high. Income too low. Future to my family?" read one man's sorry sign. American car drivers, experiencing their own sticker shock at the pump, are launching a quieter protest -- at the dealership.

For the first time since the craze for sport utility vehicles began a decade ago, car buyers are leaving the biggest SUVs on the lot and buying smaller cars. "It used to be that the average new-car buyer was more concerned about the number of cup holders than the numbers of miles per gallon," says Sean Comey, a spokesperson for AAA of Northern California. "Last year, those two became roughly equal in importance."

Enviros are thrilled that sales of SUVs, which in the past decade alone wiped out more than 30 years of advances in fuel economy, may finally be in reverse. But auto industry analysts warn that even with gas prices approaching $3 a gallon, the bigger-is-better philosophy that drives America's car-buying habits may not be ready for the ashcan of automotive history. Yet the signals are intriguing.

In an early April 2005 USA Today/CNN/Gallup poll, 57 percent of respondents said they're considering getting a more fuel-efficient car when they purchase their next vehicle. That's up from 53 percent of those surveyed last June. In the first three months of this year, sales of the biggest SUV models declined abruptly; sales of the Ford Expedition were down 27 percent, according to Automotive News, while sales of the Chevrolet Suburban were down 29 percent.

"The more gas prices have gone up, the more people have said they're not interested in having one of those cars," says Mark Bunger, principal analyst for Forrester Automotive.

Monthly gas prices this summer are expected to peak at $2.35 a gallon, according to an Energy Information Administration forecast. The agency predicts an average of $2.28 a gallon for April to September, up 20 percent from that same period last year. In some parts of the country, like Malibu, Calif., gas prices have already gone as high as $3 a gallon. Increased demand for oil from the growing economies of China and India, as well as from the United States, is contributing to rising gas prices, as is a weak U.S. dollar.

As SUVs linger on showrooms, dealers are having an easier time moving compact cars. "This is a more dramatic trend than what we're used to seeing, and it's probably safe to conclude that most of this is due to the high gas prices," says Jesse Toprak, director of pricing and market analysis for Edmunds.com.

That's bad news for Detroit, which has become addicted to those big SUV profit margins. Both Ford and General Motors cited the decline in sales of some of their most profitable (read: biggest) models when they announced their dismal earnings this month. At the end of April, G.M. reported losses of $1.1 billion in the first quarter of this year. The company's market share has fallen to an 80-year low. This week, G.M. announced a recall of some 2 million vehicles, including some of their most popular SUVs. Meanwhile, Ford Motor Co.'s first-quarter earnings fell by more than one-third, with sales of the usually popular Ford Explorer falling 25 percent in the first quarter.

In the meantime, the nascent hybrid-car market has taken off. In 2004, sales of hybrids rose 81 percent, according to R.L. Polk & Co., a Michigan automotive-market research firm. An analyst at the firm attributed the change to the expectation that gas prices will continue to remain high, as will the availability of new hybrid models. Although hybrids make up less than 1 percent of all vehicles sold in the United States, the growing market for them is dominated by Japanese companies -- Toyota and Honda -- with U.S. automakers just starting to play catch-up. Ford already has a hybrid SUV, the Escape, on the market, and more hybrid SUVs are on the way.

"After many years of not paying attention to gas prices, maybe people are responding and rejecting the excesses that Detroit is offering up," says a gleeful Daniel Becker, director of the Sierra Club's global warming and energy program.

But don't expect Priuses and Escape Hybrids to dominate car sales anytime soon. Some experts say the declines in SUV sales shouldn't be attributed to gas prices, especially because the driver who can afford a new Expedition or Excursion is unlikely to see gas prices as a tremendous financial strain. Joseph Romm, a former Department of Energy official under Clinton, does the back-of-the-envelope math.

People buying the cars that consume the most gas are unlikely to get religion about fuel economy. "If you went out and bought a brand-new Hummer, are you going to trade it in for a Prius because gas prices are high? Probably not," says Comey from AAA. Romm says it will take a serious mind shift to tarnish Americans' love affair with SUVs. "You have to really believe not only that prices are high but that they're going to stay high for a number of years if you're really going to change your behavior," he says.

Still, Comey says, a subtle shift appears to be under way. "If you have a 10-year-old SUV that you're thinking about replacing, maybe fuel economy will be on your list of priorities, when it might not have been the last time you bought a vehicle."

There could be another reason that some of the biggest SUVs are getting lonely on the lot -- the vagaries of automotive fashion. The SUV has grown so big -- and there are so many of them -- that it may have become less desirable than it used to be. "It's the end of its trend," says Bunger of Forrester Automotive. "There are so many SUVs in the market now, it's not competing as well as it used to with the crossover vehicles like Dodge's Magnum."

Four-wheel-drive crossover vehicles, which look like a cross between an old-school station wagon and an SUV, include the Subaru Outback, Acura MDX, and Volvo XC90. On average, they get gas mileage that's between a regular passenger car and an SUV or truck. "It's a segment that's growing in popularity because it combines functionality with relatively better gas mileage," says Toprak.

Yet even if Americans continue to drive less gas-guzzling vehicles, it will take decades to translate that into any significant reduction in the fuel consumption of cars and trucks on the road. The average life cycle of a new car is 15 years, so even if all new cars and trucks sold tomorrow in the United States magically got 45 miles per gallon instead of the average 20 miles per gallon today, a decline in the nation's fleet average would be gradual at best.

It also appears unlikely that great numbers of Americans, whether they own a Ford Expedition or Toyota Prius, will or even can take the most radical stand against high gas prices: to drive less. The Energy Information Administration cites the increase in "per-capita vehicle miles traveled" as one reason that U.S. demand for gasoline is still likely to grow this summer, despite the high price of gas. And that prediction fits with what AAA has seen historically, according to Comey: "In the past, record high prices have not had a significant impact on that amount of driving people do."