Backed into a corner on Social Security but still claiming a mandate, Bush seems ready for a barroom brawl. 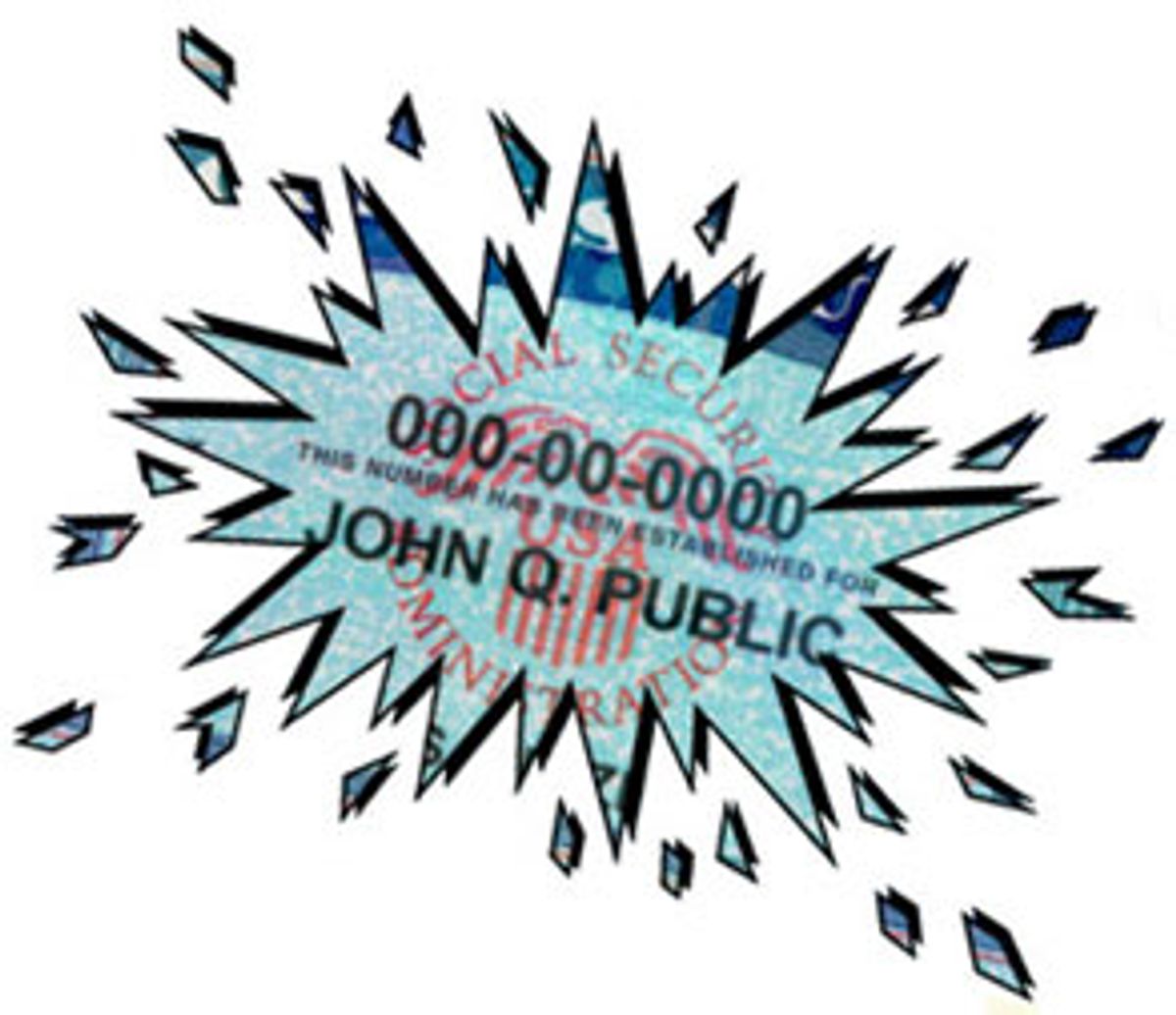 On the 99th day of his second term, one day short of the fabled 100 days used to mark a president's progress since Franklin D. Roosevelt's whirlwind beginning of the New Deal, President Bush held a press conference to explain how far he had gotten in undoing the New Deal.

Bush had allotted 60 days for a nationwide tour to sell his plan for privatizing Social Security. Insisting that the system was in imminent danger of collapse, he had proposed a vague scheme for carving out private accounts. He did not acknowledge that the deficit, ballooned by his regressive tax cuts for the wealthy, might have anything to do with solvency. Of course, he did not advocate rescinding his top-rate giveaway; nor did he suggest raising the levy on the rich or the limit on income subject to Social Security taxation (currently $90,000), the solutions favored by large majorities of the public. Nor did he propose any detailed plan, though he tried to goad the Democrats into doing so, on his terms. But the more Bush campaigned on his proposal, the less support it received. By the end of his tour, 58 percent disapproved of it and only 35 percent approved, according to a CNN/USA Today/Gallup poll.

Rather than admit defeat, Bush upped the ante. He unveiled a new idea at his press conference, "progressive indexing," that would slash benefits for the middle class and affluent, but purportedly not those for the poor. The poll numbers rolled in instantly -- 54 percent disapproved, 38 percent approved. Even Sen. Trent Lott of Mississippi, lately deposed as majority leader, dismissed Bush's plan as little more than "a welfare system." Indeed, that is its intent.

The day after the 2004 election, Bush claimed that he had achieved a mandate. "When you win there is a feeling that the people have spoken and embraced your point of view, and that's what I intend to tell the Congress, that I made it clear what I intend to do as president." Even last week, as Bush was replacing one unpopular Social Security panacea with another, Karl Rove, his chief political advisor, was taking another victory lap, this time in Ohio, to declare before a gathering of Republican faithful that Bush was making a lasting political "realignment."

An autodidact and amateur history buff, the University of Utah dropout has beguiled younger members of the Washington press corps with billowing visions of realignment since 2000. Rove regularly compares Bush's campaign with William McKinley's in 1896, which ushered in a long period of Republican dominance. "A successful party," he told his reportorial transcribers, "had to take its fundamental principles and style them in such a way that they seemed to have relevance to the new economy, the new nature of the country, and the new electorate." The analogy also contains a self-serving implication, with Rove casting himself as the modern version of Mark Hanna, the Republican kingmaker behind McKinley. (Rove's assertions about realignment have always been little more than a press strategy. They may reflect his wishful thinking, but the only actual constituencies he has in mind for this talk are reporters and pundits.)

In the 2004 election, Bush received a legitimacy he did not have from the 2000 election, when he lost the popular vote and was handed the presidency by the Supreme Court -- in a decision notable for Justice Antonin Scalia's claim that counting the votes in Florida would call into question Bush's "legitimacy." But the shift from illegitimacy to legitimacy is not a mandate for realignment. In 2004, the country made a decision by a narrow margin to stick with Bush as a defender against terrorism. Bush won no mandate to dismantle the legacy of the New Deal, and during the campaign he went out of his way to deny he would ever do that. Now a majority of evangelical Protestants who voted for Bush, his strongest constituency, are awakening to his position on Social Security, and they disapprove, according to a Democracy Corps poll. The more Bush openly pushes his agenda, the more his base disintegrates.

In 2004, Rove field-marshaled a campaign of tactical targeting -- focused on anxious working-class women ("security moms"), "faithful" Catholics, evangelicals and white married men. With the launching of the Social Security tour, Rove hoped to duplicate his tactical success, peeling off enough marginal constituencies to frighten a few marginal Democrats into backing the Bush plan, and thereby shatter Democratic unity, force the proposal through, and herald realignment. But the process Rove set in motion during the campaign is now operating in reverse, as distress among evangelicals over a change in Social Security suggests.

Rove's claim to be the advance man of realignment bears superficial plausibility mainly because he was a key operative when realignment in Texas accelerated in the 1990s. But the cards were already dealt there. While his smarmy dirty tricks helped undermine a number of prominent Democrats, and he latched on to the rising star of George W. Bush, Texas was far along in its drift into Republicanism, following the classic Southern pattern on a slightly delayed schedule.

In the first 100 days of Bush's second term, Rove's magisterial vision of realignment, undergirded by the movement of tectonic social forces, is being obviously eclipsed by Tom DeLay's undisguised brutal leadership. The defining sensibility of the Bush administration -- 50 percent plus one equals 100 percent -- is represented by the mindset of the Republican House. Following Majority Leader DeLay's edict, Speaker Dennis Hastert enshrined the operating principle that the "majority of the majority" governs the entire body. The minority has no rights, no consultative role, no say whatsoever.

By attempting to eliminate the Senate filibuster for judicial nominations, overriding the constitutional prerogative of "advise and consent," the Republicans are trying to turn the more deliberative upper body into a reflection of the lower one. Thus Bush is running his second term under the political assumptions of the Republican leadership of the House. It should not be forgotten in the rush to eviscerate Senate rules that Vice President Dick Cheney was once the House whip and that it was he who acted as the patron and protector of Newt Gingrich in his rise to leadership.

Bush's new proposal on Social Security has both a policy and a political content. The two are one and the same. Bush's "progressive indexing" would destroy Social Security as a universal old-age pension and disability program, transforming it into a politically vulnerable welfare supplement solely for the poor. "Under the proposed reductions," the New York Times observed, "young workers who now earn about $36,000 would face a 16 percent cut; those earning about $58,000 would face a cut of 25 percent, and those earning $90,000, 29 percent. People not yet in the work force would face even larger reductions."

But there's worse news. Economist Brad DeLong calculates just how Social Security as we know it would end for the middle class. Bush's proposal, he writes, "turns Social Security from a program in which benefits rise with incomes to one in which nearly everybody's benefit is roughly the same: about 1,900 of today's dollars a month. [It] caps the maximum Social Security retirement benefit at roughly $22,500 a year (adjusted for inflation). Bush's private-accounts plan -- which would allow people to contribute 4 percent of their wages -- makes retirees repay the taxes they diverted into private accounts out of their standard Social Security benefit. Medicare premiums are already deducted from your Social Security check. Deduct the claw-back for the private-accounts diversion as well, and by late in this century the odds are that -- at least for the upper middle class -- the standard Social Security check would be zero."

The program would foster a new code language. Once again, the poor would be stigmatized as undeserving, purportedly not having worked as hard for what they earned. The middle class would be "victimized by unfair discrimination" (language used in the 1980 Republican Party platform to denounce affirmative action). As under Nixon and Reagan, minorities would be tagged as greedy "special interests" and not among mainstream American "groups." (Reagan's acceptance speech at the Republican convention in 1984 was masterful for its use of coded rhetoric: "Is there any doubt that they will raise our taxes? ... We're here to see that government continues to serve the people and not the other way around ... We don't lump people by groups or special interests.")

Under Bush's program, "taxes" would become a word to designate the expropriation of resources from the middle class by the federal government to fund "less qualified" minorities and the work-shirking poor. "The government" would become the central villain: indifferent to the plight of the middle class, preying upon it like a vampire, the instrument that "bleeding-heart liberals" use to salve their misplaced sense of morality -- by forcibly transferring taxpayer dollars to lazy, cheating, criminal and licentious freeloaders and "welfare queens." And "values" would become the ultimate word to invest social and economic inequality with moral legitimacy.

As the late Lee Atwater, Rove's mentor in pseudo-populism, explained in 1984 to Washington Post reporter Thomas Edsall: "In the 1980 campaign, we were able to make the establishment, in so far as it is bad, the government. In other words, big government was the enemy, not big business ... If the people are thinking that the problem is that taxes are too high and government interferes too much, then we [Republicans] are doing our job." The best story, Atwater continued in his candid disquisition, was of a welfare recipient who "fills his den with liquor using food stamps."

Such is the vision of Social Security as a wedge issue for a Republican realignment. For now, however, what the Bush White House has conceived as a wedge issue against the Democrats has become a wedge whose sharp edge is pointed at the Republicans.

Still, even as Republicans become ever more divided, their leaders in Congress contrive new devices to advance Bush's proposal. Perhaps they might even turn the Social Security scheme into an amendment to a reconciliation bill on tax cuts. Many twists and turns lie ahead.

But without waving the banner of the war on terrorism to obscure all else, Bush is becoming the incredible shrinking president. The election provided an event around which Bush could claim his indispensability in combating terrorism. But now he is left simply with the endless civil strife in Iraq, whose chief beneficiary is Iran. (Fifty-seven percent of Americans now believe it was not worth going to war, while 41 percent say it was, according to the latest Gallup poll, a fall of nine points in support since February.)

Bush's pretense that he gained a mandate in the 2004 election is being stripped away. But the loss of his political sheen is only inciting his arrogance. A week before he altered his Social Security plan, Bush held a meeting at the White House to pressure members of Congress. The president pulled aside Rep. Charles Rangel, the Democrat from Harlem, and told him that his 60-day tour was going very well and those who opposed him on Social Security would pay the price in the 2006 midterm elections. Rangel replied with dry wit: "I told him if he is right, the press has not been very kind to him."

Whether suffering delusions of grandeur or not, Bush's attitude is to bludgeon his way out of the corner he is backing himself into. Hurling threats, he's looking for a barroom brawl. Some realignment.