Just about everyone -- even Bush -- predicted the perilous situation the U.S. military finds itself in. 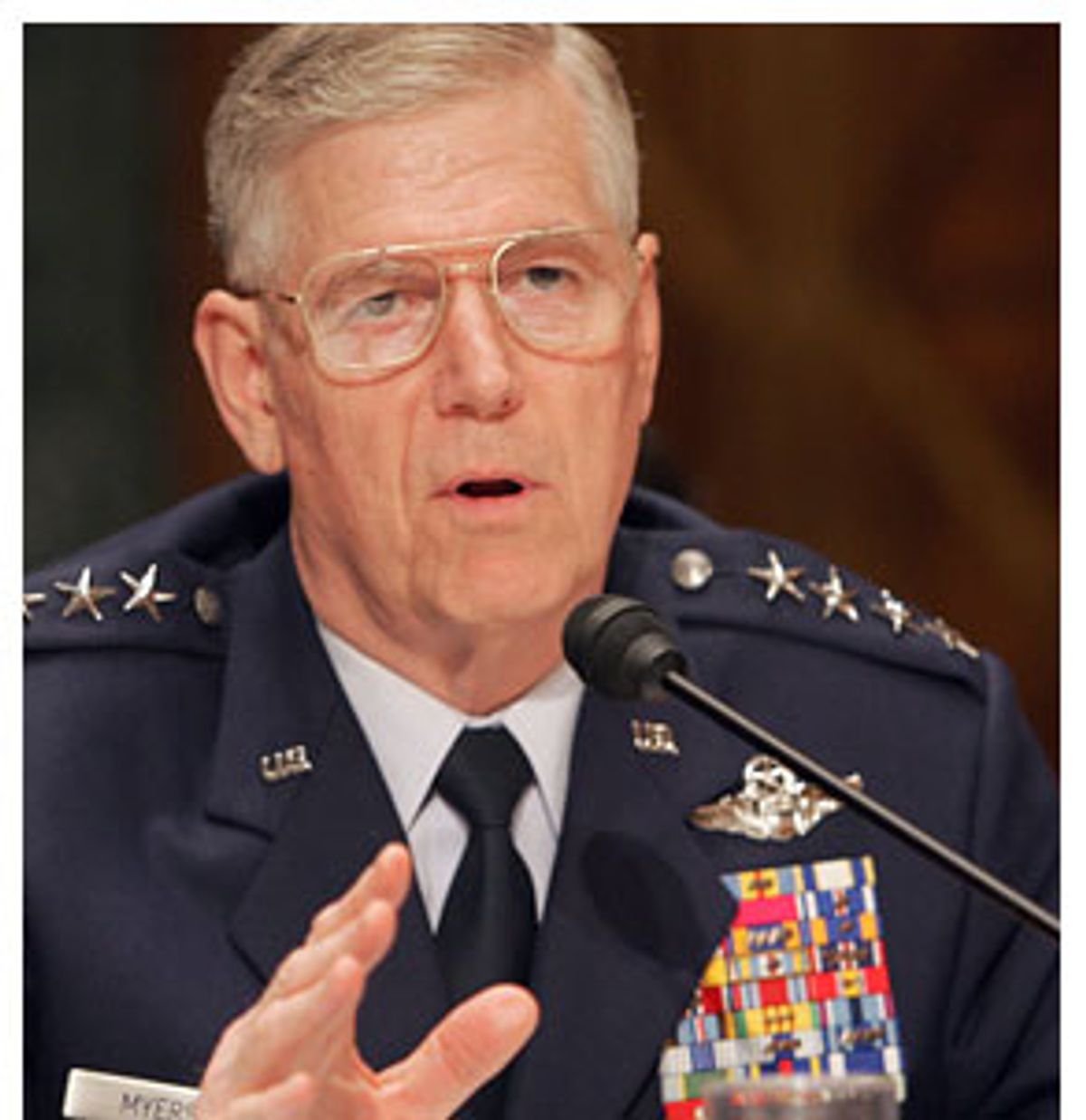 The news this week that the protracted conflicts in Iraq and Afghanistan are diminishing the U.S. military's ability to prosecute a possible next war should surprise exactly nobody.

In fairness, it might have surprised President Bush, who had just proclaimed, at his April 28 press conference, that this combat was certainly not diminishing our ability to wage war where and when we choose. But for residents of the real world, the news was predictable -- mostly because of the number of folks who have foretold it and fretted over it since even before the Iraq war began.

For those who missed it, Pentagon leaders briefed members of Congress Monday on an annual risk assessment by Joint Chiefs of Staff chairman Richard Myers that concluded that another major conflict in the world would be won more slowly and at greater cost than if U.S. forces weren't tied down in Iraq and Afghanistan.

Myers' report cited numerous concerns, including dwindling stockpiles of precision-guided munitions and overwork of reserve units. More broadly, according to the New York Times, which received a copy of the still classified report, Myers wrote that the military's risk of being unable to handle an additional conflict is "moderate, but trending towards significant," though he added that at the broadest strategic levels, the military's risk is "significant, but trending lower."

Apparently fearful that the revelations might inspire foreign evildoers to get uppity ("Our ability to manage the perceptions of our adversaries is critical," Myers wrote), the Pentagon immediately deployed senior officials to mitigate the bad news, stressing that Americans would win any new conflicts, but that the victory "wouldn't be as pretty," as one anonymous official put it to the Washington Post.

But the problem these anonymous spinners have is that the Myers report is not an outlying blip in a sea of otherwise good news. Instead, it fits perfectly into the growing picture of the military's broader problems. On Monday, for example, the Army announced that recruiters had missed their targets for the third month running. According to the Post, the Army met less than 60 percent of its target last month. (Might this be related to the Army's decision in 2003 to deploy 2,500 recruiters to Iraq as trigger pullers?) The Marines also missed their marks in February and March. Overall, the active Army is 15 percent behind its recruitment goal this year, and the Reserve is 20 percent off pace, Army Secretary Francis Harvey told USA Today. And this is at a time when enlistment bonuses are higher (and about to rise again) and recruiting standards are lower.

The Army is stretched so thin that not only have units meant for a theoretical Korean conflict been deployed to Iraq, but the United States has had to send the "Old Guard," a ceremonial unit from Fort Myer, Va., overseas. It had not been deployed since Vietnam.

Personnel aren't the military's only problem. The United States pre-positions Army and Marine equipment on ships around the globe to cut down on deployment times in an emergency. Roughly half of that gear has been used up. As of the end of 2004, projections were that it would take two years for the Army to repair and refit its forces -- if the Iraq conflict ended immediately. And there hasn't even been enough equipment to train stateside soldiers for duty in Iraq. "The Army in the aggregate is reporting readiness levels that are less today than they have been in the past," Paul Mayberry, the deputy to the undersecretary of defense for personnel and readiness, understated to the Post last month.

But perhaps the most infuriating thing about the current situation is how unnecessary it is. "You go to war with the Army you have, not the Army you might want or wish to have," Secretary of Defense Donald Rumsfeld lectured to troops in December 2004. But under Rumsfeld's bungled watch, the United States not only marched eagerly -- and needlessly -- into a prolonged occupation that many predicted would pin down and strain large chunks of the armed forces but did so with a strategy that maximized those problems. And with the exception of ivory tower neoconservatives who foresaw a brief occupation marked by grateful Iraqis tossing flowers (not improvised explosive devices, or IEDs), most military experts saw this whole mess coming.

Before the war had even started, then Army Chief of Staff Eric Shinseki told Congress an occupying force in Iraq would require "on the order of several hundred thousand soldiers." Rumsfeld and his deputy, Paul Wolfowitz, made little effort to hide their disdain for the decorated soldier, with Wolfowitz calling Shinseki's estimate "wildly off the mark."

Many military strategists argue that a larger force could have brought order to the country more quickly and not given the insurgency time to fester. "What [the coalition forces] weren't able to do was capitalize on that success," Paul Van Riper, a retired three-star Marine general told me last year. "This is operations and tactics 101. You need to be able to exploit success and you need a reserve."

As early as November 2003, the Congressional Budget Office found that without significant numbers of reservists being called up, "the active Army would be unable to sustain an occupation force of the present size [150,000 soldiers] beyond March 2004 if it chose not to keep individual units deployed to Iraq for longer than one year without relief."

In February of last year, Sen. John McCain, R-Ariz., was among the many worrying that the Army's Reserve forces were in trouble. "From my conversations with the Guard and reservists around the country, you are going to see a very large exodus of the members of the Guard and Reserve because of the incredible deployment and a burden that has been laid upon them," he told Rumsfeld.

And the warnings weren't simply coming from outside the Bush bubble. Then Deputy Secretary of State Richard Armitage (who is now running for secretary of defense) foresaw these problems as well. "Though [Armitage] believed they would put down the insurgency [in Iraq] and win in the end, the U.S. military was going to pay for ten years or more. The Army, in particular, was stretched too thin," Bob Woodward wrote in his book "Plan of Attack." "They were fighting three wars really -- Afghanistan still, Iraq and the continuing global war on terrorism. It was not logical nor was it possible, in Armitage's view, that this could be accomplished with a force of the same size that existed during the Clinton administration in peace time. But that was what the Bush administration was attempting."

Perhaps the most damning criticism of President Bush's mishandling of the U.S. military comes from his own prophetic words in his first speech on national security as a presidential candidate, at the Citadel military academy in September 1999, which was aimed at the Clinton administration. "This administration wants things both ways: to command great forces, without supporting them, [and] to launch today's new causes, with little thought of tomorrow's consequences," Bush said.

The president would do well to remember those words in regard to his own performance as commander in chief.