Jewell in the rough

How did sweet Cousin Geri from "The Facts of Life" end up cleaning up after the ruffians of "Deadwood"? 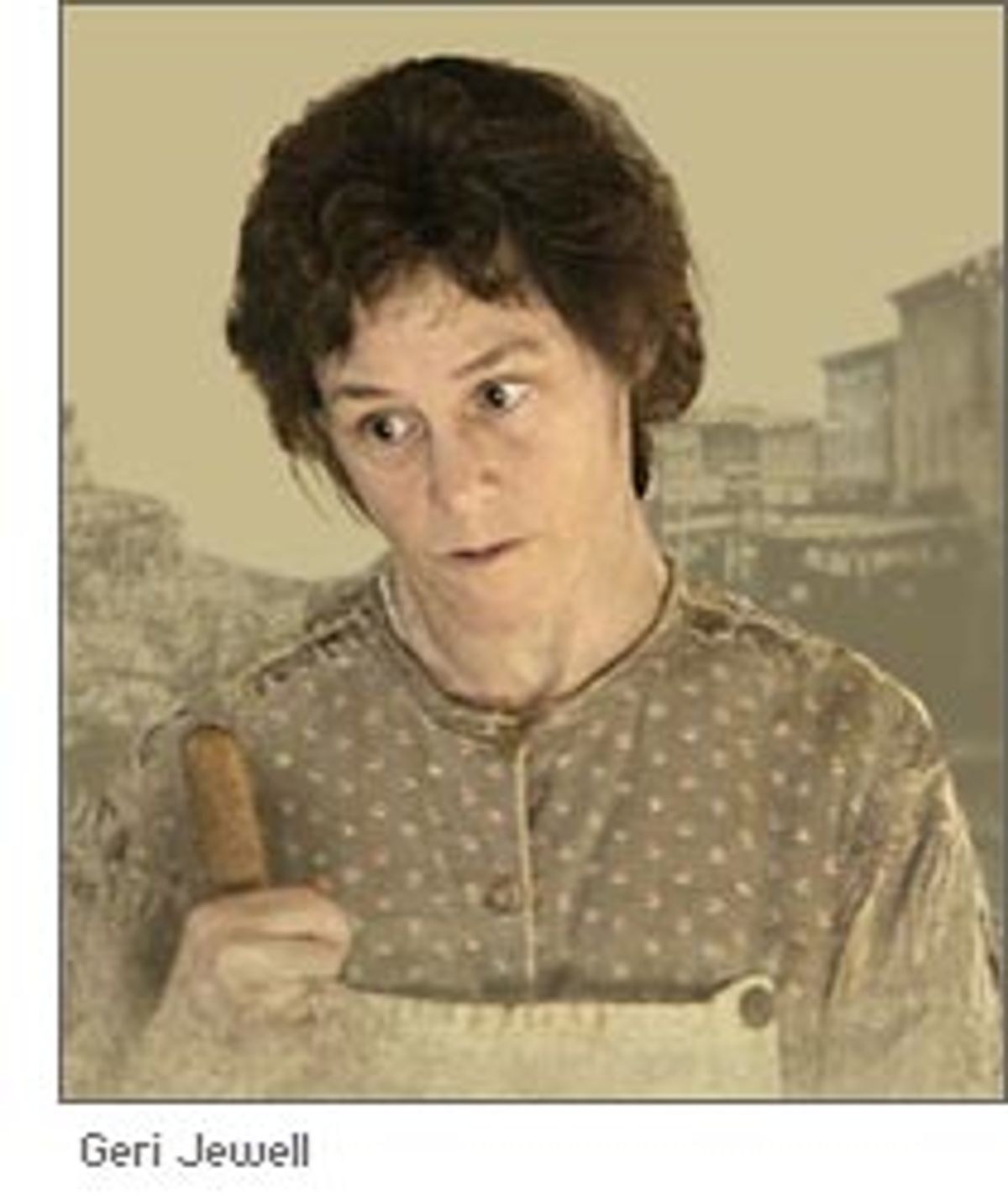 If you grew up in the '80s and watched your daily dose of television, you might be excused for feeling like you and the characters on the shows you watched somehow formed a family. In addition to your boring biological clan, you had your raffish adopted brothers Arnold and Willis, your Reaganite brother Alex, your irrepressible kid sister Punky, and your foul-mouthed grandmother Sophia. Within this fictional family unit, one member stood out: your cousin Geri, who occasionally popped up to teach you tolerance while cracking jokes about cerebral palsy, her lifelong neurological condition. Cousin Geri was very special, just like the episodes of "The Facts of Life" that featured her.

Geri Jewell, the actress and comedian who played Cousin Geri on "The Facts of Life" from 1980 to 1984, is back, costarring as Jewel on HBO's "Deadwood." With its harsh language and violent plot lines, "Deadwood" is as far removed from "The Facts of Life" as the HBO drama's frontier setting is from the NBC sitcom's genteel all-girls school. There are no lessons and hugs on "Deadwood": There's a lot of gunplay and hooker slapping.

"They're from one extreme to the other," Jewell, 48, says of the gritty revisionist western. "When I was talking to David [Milch, creator of "Deadwood"], I didn't quite get it. I was thinking more in terms of Miss Kitty on "Gunsmoke." And then when I saw the first script for the pilot, I was like, Whoooah!" At this she laughs. "They did curse a lot then! And I hate to make this pun, but it was a fact of life."

Also a fact of life was Jewell's long absence from television after her role as the shunned-then-accepted cousin of the very rich, very mean, very blond Blair Warner. "'Facts of Life' was groundbreaking for me ... But if you remember, after 'Facts,' you didn't see very much of me. Because it was like the same old thing." Here she affects a high-pitched, patronizing voice, "'We already did an affliction story!' That's what I became known for: my disability and not my ability. I had to ride that wave. I chose to take that route ... I saw myself as making a conscious choice, aware of what the 'disability card' was and I thought, in time, I would overcome it. I just didn't know it would take me 30 years!"

After "Facts," Jewell returned to stand-up with occasional appearances on TV, as in her 1990 guest-star spot on Fox's "21 Jump Street." She played an injured cop who enlisted the baby-faced Jump Street narcs to track down a stalker with a thing for disabled people. ("A little bit far-fetched," she concedes of the plot line she herself brought to the show's producers.) She also had a recurring role on the CBS soap "The Young and the Restless" and has toured the country speaking about disability. This past spring, she received the Independent Living Legacy Award from the Community Resources for Independence, in honor of high visibility as a person with a disability on television.

A debilitating injury, caused by a fall in 1999, requires Jewell to get large doses of Botox injected into her back and shoulders every few months. While filling her prescription at a Santa Monica pharmacy, she met David Milch just as he was developing his HBO series about a prospecting town without pity. As Milch tells it in typically hard-boiled style in the commentary track of the "Deadwood" Season 1 DVD, "I met 'er in a drugstore just before we started to shoot and I thought it would be an interesting thing to have a character who was handicapped or whatever the goddamned expression is supposed to be. See how a person who was physically challenged would function in an atmosphere like this."

Milch offered her a role on the spot. "It was an amazing morning," recalls Jewell.

Together, they developed the character that would become Jewel, the barkeep and occasional whipping girl to "Deadwood's" resident badass Al Swearengen. "[Al] has a love/hate relationship with her," Jewell muses. "I think the reason he's hard on her is in part probably because he resents loving her and he doesn't want to give his soft side away."

Viewers may wonder if Al even has a soft side. The phrase "stop dragging that fucking leg" seems to roll off his tongue more easily than "please" and "thank you" in most episodes. "It's probably split in half with some people who can't handle the language or the brutality of it. But, I think if you get past that, the writing is phenomenal," says Jewell. As is her character: "I look at Jewel in awe and think, 'Oh, my god!' I think Jewel is stronger than Geri."

At some point, Jewell would like to reintroduce her own soft side. "I'm hoping that I can slip back into comedy sometime, because I don't want to go completely drama ... I miss doing funny, because I'm funny."

For now, "Deadwood" lets her exercise her dramatic chops: "It's very fulfilling for me, having never been taken seriously as an actress. It's a wonderful opportunity to show what I can do besides having cerebral palsy. I can wake up in the morning and do that. That's not something I have to work at," she says. "I'm an adult women, and David Milch has given me the opportunity to express that part of me. Whereas, before I was just this 'actress with a disability.' I wasn't a woman at all. I was just 'The C.P. Comic.'

"It's put me back on the map. And it's shown people I haven't died of cerebral palsy." She laughs, exhibiting a bit of "Deadwood"-worthy gallows humor. "Occasionally people say, 'Wow, she's still alive?' Yeah! A lot of people think that any disability is degenerative, and that's not always the case."

Ever the comic, Jewell starts riffing: "I'm gonna die one day, but it won't be from cerebral palsy. It may be from losing my balance and being hit by a car..." She pauses to let that sink in for a second.

Matt Haber has written for the New York Times, Esquire and low culture.