G.E. CEO Jeffrey Immelt has pledged to "make coal sexy again" with a new set of enviro-friendly technologies. But what if his green gamble doesn't pay off? 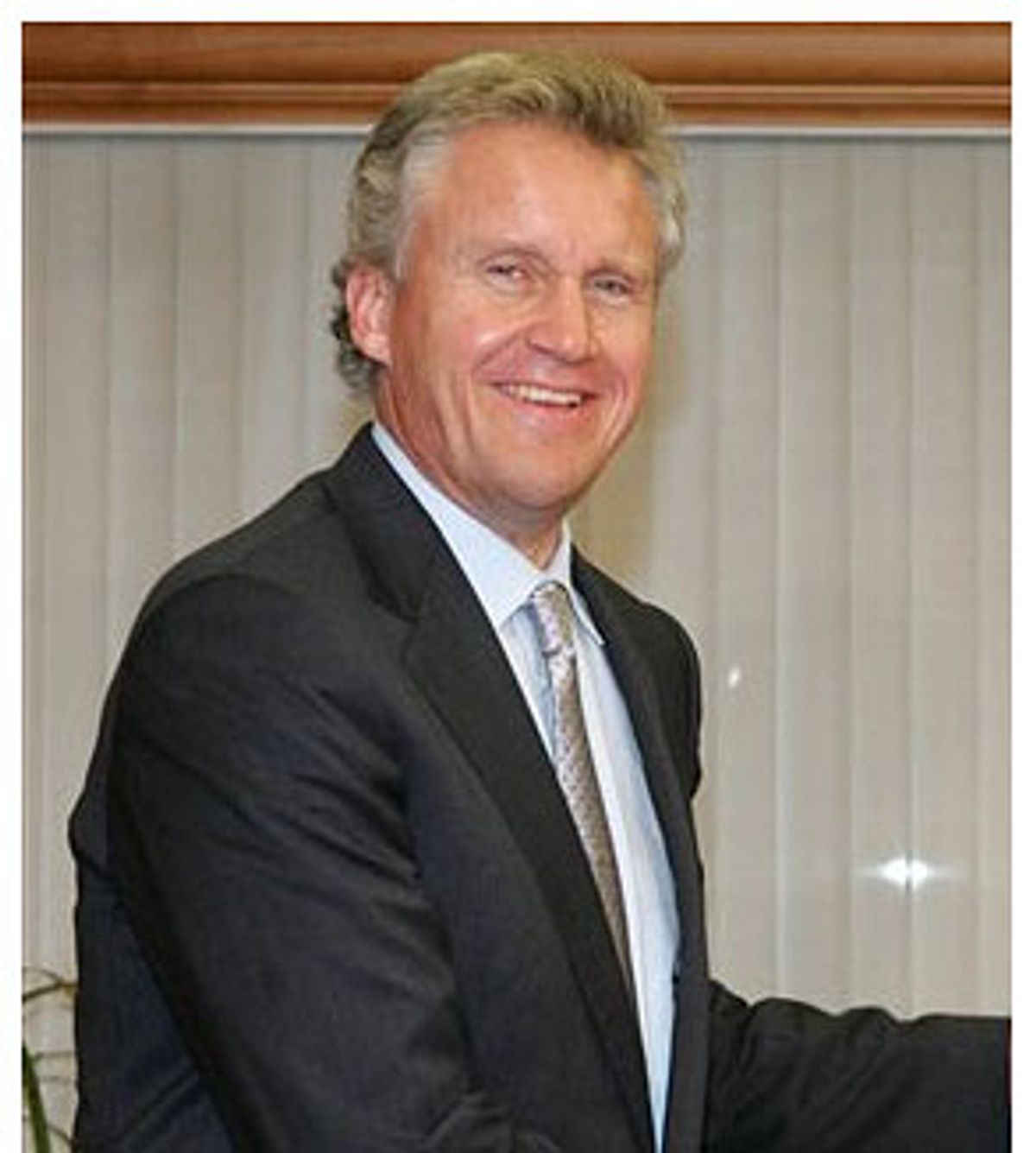 Monday night, General Electric chairman and CEO Jeffrey Immelt canoodled with Congress members and industry top brass at a swish cocktail party on Pennsylvania Avenue in Washington, celebrating the launch of "ecomagination," an initiative he announced earlier in the day to ramp up development of clean technologies and lighten the company's Goliath-like environmental footprint.

Guests nibbled organic canapis and sipped wine produced by a solar-powered California vineyard (equipped with GE's own photovoltaic panels) as they perused exhibitions of the company's new technologies -- here a life-size model of a hybrid-engine train and a state-of-the-art wind-turbine blade, there a super-efficient washing machine and a sophisticated diorama of coal-gasification technology.

After a speech in which Immelt announced that "it's no longer a zero-sum game -- things that are good for the environment are also good for business" and vowed that G.E. was embarking on this initiative "not because it is trendy or moral, but because it will accelerate [economic] growth," he presented a series of ecomagination television ads that will be airing nationwide over the next several months.

One spot in particular, which Immelt described as "a play on how to make coal sexy again," elicited hearty applause from guests such as James Connaughton, President Bush's senior environmental advisor. It features scantily clad models dusted with soot and shoveling coal in a dingy mine as a voice-over announces, "Now, thanks to emissions-reducing technologies from G.E., the power of coal is getting more beautiful every day."

It's part of an explosive marketing campaign (costing roughly $90 million, according to an Adweek estimate) that also included eight-page advertising inserts in yesterday's Wall Street Journal, Washington Post and New York Times. The print ads featured splashy visuals -- a smokestack sprouting leafy branches and an airplane engine that resembles the spiraling core of a conch shell, for example -- and sparse but lofty text.

Gimmicky as the fetching coal miners and nature-machine imagery may sound, don't assume that it's all a green-washing snow job. Granted, there are more than a few environmental skeletons in the G.E. storage room that might call for creative P.R., not the least of which is the long-running Hudson River controversy in which the company dumped scads of toxic chemicals into the New York waterway and went to great lengths to shirk financial responsibilities for the cleanup. But the ecomagination program in fact reflects an admirably broad and ambitious effort to pioneer next-generation clean technologies, lower the company's emissions, and boost its energy efficiency.

Immelt is pledging to double G.E.'s research-and-development investments in eco-friendly technologies from $700 million in 2004 to $1.5 billion in 2010. That's more than 10 times the 2005 federal R&D budget for solar and wind combined, and equivalent to the total amount of current annual venture-capital investment in clean-technology development in the U.S, according to Joel Makower, founder of GreenBiz.com. And Immelt aims to double revenues from cleaner technologies in the next five years -- from $10 billion in 2004 to at least $20 billion in 2010.

He has also committed G.E. to reducing companywide greenhouse-gas emissions by 1 percent and improving energy efficiency by 30 percent by 2012. These numbers may sound trifling -- and indeed are lower than what would be required under the Kyoto Protocol -- but they are no small step for a company that ranks as the single biggest industrial behemoth in the world (in terms of market value) and that would otherwise see a whopping 40 percent increase in greenhouse-gas output by 2012, according to its current growth projections.

The goals were developed in partnership with the World Resources Institute, a green think tank, whose president, Jonathan Lash, chaired President Clinton's Council on Sustainable Development. The G.E. initiative "is enough to make even a gloomy environmentalist hopeful," Lash said at the launch event for ecomagination, and went on to call Immelt "not only a visionary, but in the absence of coherent national policies ... encouraging energy efficiency and use of renewable energy, he is just plain gutsy."

Lash even had respectful things to say about G.E.'s continued emphasis on "clean coal" and nuclear technology. "Five years ago, I had to struggle to suppress my gag response to terms like 'clean coal,'" he said, "but I've since faced the sobering reality that every two weeks China opens a new coal-fired power plant. India is moving at almost the same pace. There is huge environmental value in developing ways to mitigate these [plants'] emissions" with coal gasification and sequestration of carbon-dioxide emissions. On the issue of nuclear power -- of which Immelt is a strong advocate, as G.E. manufactures nuclear reactors -- Lash said, "Global warming is the most pressing environmental problem humankind has ever faced. I wouldn't push any potential solution off the table, and I think nuclear has to be a part of the carbon-free energy mix."

Lash applauded, in particular, Immelt's insistence that his company's voluntary effort is by no means a substitute for federal action: "Industry cannot solve the problems of the world alone -- we need to work in concert with government," Immelt said at the launch event, and went on to encourage federal leaders to begin by "clarifying policy" and "committing to market mechanisms."

When pressed to clarify his stance on specific policies -- Would he endorse a federal renewable portfolio standard (RPS) requiring that a certain percentage of the nation's electricity come from renewable sources? Does he support a cap-and-trade emissions program such the one called for by the McCain-Lieberman Climate Stewardship Act? -- Immelt was adamantly vague. He expressed general support for the RPS concept, acknowledging that "Europe has been a leader in renewable energy" largely because "they have clear set goals [of] 12 percent renewable energy by 2010," but later suggested that the U.S. apply the concept differently with a "floating" rather than specific target -- whatever that means.

And though he refused to speak directly to the McCain-Lieberman bill or other proposals for carbon caps -- "I am a business guy, I'm not here to write policy" and "My job is not to set regulation," he snapped during the press conference -- he did concede that "we live in a carbon-constrained world where the amount of CO2 must be reduced" and that "real goals or targets, whether voluntary or regulatory, are helpful because they drive innovation."

A G.E. staffer indicated that Immelt had meetings with both Sen. John McCain, R-Ariz., and Connaughton yesterday, so he's clearly not too much of a business guy to hobnob with environmental-policy architects. And the fact that the company kicked off its sustainability initiative in Washington, a stone's throw from the White House, rather than New York, the nation's financial center, indicates a desire to influence policy and lawmaking.

There's also a solid bottom-line incentive for Immelt to put his weight behind carbon caps: G.E. stands to benefit from increasingly strong environmental regulations and, indeed, from climate change itself -- both present opportunities for product innovation. "Big, long-term successful companies have been able to spot really huge changes and be on the right side of them," Lash said. "Immelt believes he is going to operate in a carbon-constrained world and he will have the technologies that the world wants and needs to buy" -- from wind, solar and nuclear equipment to desalinization plants that could ease the pains of drought.

Immelt cast the company's motives in a more altruistic light, quoting Thomas Edison, who more than a century ago founded the company that would become G.E.: "I never perfected an invention that I did not think about in terms of the service it might give to others ... I find out what the world needs, then I proceed to invent it."

Of course, if Immelt can merge altruism and profitability by selling technical fixes for the many challenges posed by global warming, more power to him. The stakes today are certainly far higher than they were in Edison's time.