The Bush administration and its media allies are trying to use one inadequately sourced story to make the torture and abuse scandal go away. They can't get away with it -- can they? 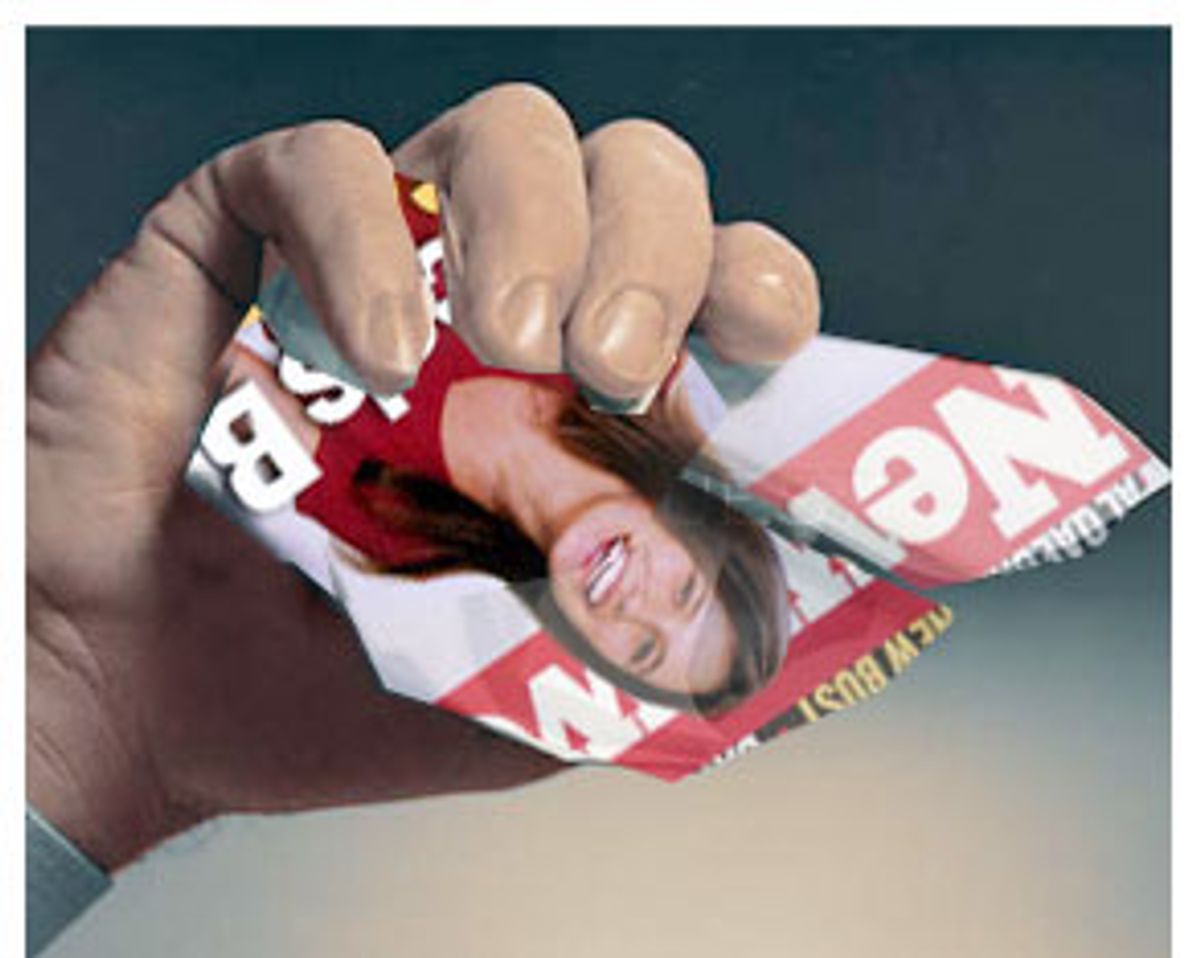 It seems like only yesterday that liberals were the ones calling for the head of Newsweek's Michael Isikoff, thanks to his gossipy reporting on every distinguishing characteristic of President Clinton's sex-triggered impeachment saga. Week after week, Isikoff enraged Democrats with his "scoops" about the Clinton scandal, sometimes spoon-fed to him by Linda Tripp or Lucianne Goldberg or other anti-Clinton "elves."

Now the right is after Isikoff and Newsweek over an apparently inadequately confirmed story that a U.S. military investigation had uncovered evidence that Americans desecrated the Quran while interrogating Muslim prisoners at Guantánamo Bay. The disproportionate firestorm over Newsweek's stumble has less to do with the riots the story sparked in the Muslim world than with the riotous power of Republican bullies and their allies in the White House and the right-wing blogosphere. It's absurd for rightist blowhards to try to paint Clinton-critic Isikoff and his editors as part of a vast left-wing conspiracy determined to undermine our troops in Iraq. And they need to be called on their intimidation campaign.

Riding high after the humbling of Dan Rather, the right clearly sees another opportunity to humiliate the so-called liberal media. The only answer for Newsweek, and the rest of the media -- old, new, broadcast, blogosphere -- is to fess up to what went wrong with the Isikoff story, and then continue to report the hell out of the scandal of American-sponsored torture and abuse of political prisoners in Guantánamo and Iraq. Because it's those well-documented stories that created the tinder of rage that the tiny Newsweek item sparked.

Based on what we know now, the 10-sentence Newsweek Periscope item does seem too lightly sourced to publish. Although one of Isikoff's Pentagon sources raised no objection when the reporter ran the item by him before publication, the military leadership denied it once the story was published. To its credit, Newsweek was quicker than CBS to get to the bottom of the conflict after problems were raised with the story, and to simply report what it found: After the controversy arose, Isikoff's primary unnamed source told the magazine that although he'd read reports of Quran desecration in some official papers, he couldn't be sure exactly where, and he was no longer sure that it was in a report on the U.S. Southern Command in Miami, which is what he had earlier claimed. Newsweek announced it was looking into the story over the weekend, and editor Mark Whitaker retracted it and apologized on Monday. End of story.

But not for the Bush administration. Press secretary Scott McClellan said Newsweek would have to do "more" than retract the story and apologize. "We would encourage them to help undo the damage that has been done," he said. "Some of it's not going to be able to be undone, some of it is lasting." Donald Rumsfeld warned darkly: "People need to be very careful about what they say, just as they need to be very careful about what they do." And their friends in the world of punditry, from newspapers to blogs, went nuts.

All this comes despite the fact that the chairman of the Joint Chiefs of Staff, Gen. Richard Myers, in an outbreak of integrity, denied the magazine triggered the Afghan rioting, at least. Thorough-going honesty would force the administration to admit that widely publicized photos of psychological, physical and sexual humiliation and torture at Abu Ghraib certainly prepared the Muslim world -- and much of the rest of the world, including many Americans -- to believe our military, following the Rumsfeld Rules, is capable of nearly anything, including flushing the Quran down the toilet.

It is beyond dispute, at this point, that dozens of detainees, along with their families and their lawyers, have complained about witnessing American soldiers and interrogators desecrating the Quran as well as forcing detainees to violate tenets of Islam. One Guantánamo translator, "Inside the Wire" author Eric Saar, says religious humiliation was a frequent investigative technique, and the Army has confirmed that it is investigating Saar's charges. The Center for Constitutional Rights and Human Rights Watch have found many of the detainees' charges credible.

What made Newsweek's item news was the existence of a government official -- not a lawyer or detainee -- stating that a U.S. military report had confirmed charges of Quran desecration. (And in fact, the magazine's source still says he's read official reports about Quran desecration, just not in the particular report where he'd said it was.) While Newsweek did the right thing retracting a story it could no longer fully vouch for, the rest of the media shouldn't draw the wrong conclusions from the magazine's troubles.

One wrong conclusion would be to forswear the use of anonymous sources. I agree with the growing chorus of critics who insist they should be used sparingly and with tight editorial scrutiny -- they certainly are at Salon -- and I don't know how carefully Isikoff, co-writer John Barry and their editors examined the decision to use a single unnamed source for the item. But giving up their use entirely surrenders a crucial tool in investigative journalism. Especially confronting an administration that stonewalls (Cheney energy task force), pays pundits to hype its programs (Armstrong Williams and friends), credentials fake journalists to ask softball questions at White House briefings ("Jeff Gannon"), and puts a Republican operative in charge of ferreting out "bias" in public radio and television (CPB's Ken Tomlinson), these are perilous times for the truth, and journalists can't cave despite intimidation.

Another terrible outcome would be for the right's crusade against Newsweek to succeed in doing to the issue of military torture what its jihad against CBS did to the story about the favoritism enjoyed by President Bush during his National Guard career -- insist it's a whole-cloth creation of left-wing journalists eager to discredit the president. Just as the basic outline of the CBS story was true -- Bush did come in for special treatment in the Guard, and some of his Texas superiors were upset about it -- there is no doubt that some American military personnel have tortured and abused prisoners, using religious humiliation along the way.

Finally, it might be unseemly for Newsweek to make one additional point, but others can, and should: It's an almost painful irony that the magazine's troubles with the unreliable memory of a single anonymous source evokes nothing more directly than the White House's problems with hidden sources (most of whom the White House created or encouraged) providing faulty information on weapons of mass destruction that led us into war in the first place. Last April our new national ethics expert Scott McClellan punted when asked why the White House relied on a single anonymous source for reports of mobile Iraqi weapons labs that figured centrally in dark stories of why we should hit Saddam before he hit us. (The Think Progress blog has it here, and it's worth an aside to say that one silver lining to the Newsweek mess is that the lefty blogs seem smarter and better focused than they were during Rathergate, though they still can't match the decibel level of their friends on the right.)

Newsweek's Mark Whitaker offered a heartfelt apology for his sourcing mishap; we're still waiting for someone in the White House to do the same about an entire war that was improperly sourced. Since this would mean the Bush administration accusing itself, we'll likely wait forever. In the meantime, the only thing to do is acknowledge the mea culpas and move forward, and work even harder to get to the bottom of stories this White House is trying to bully journalists into ignoring.