What's not to love about light sabers, wookies and a brutal sendup of George W. Bush? Plenty! But that doesn't mean "Star Wars Episode III: Revenge of the Sith" will disappoint legions of Lucas fans. 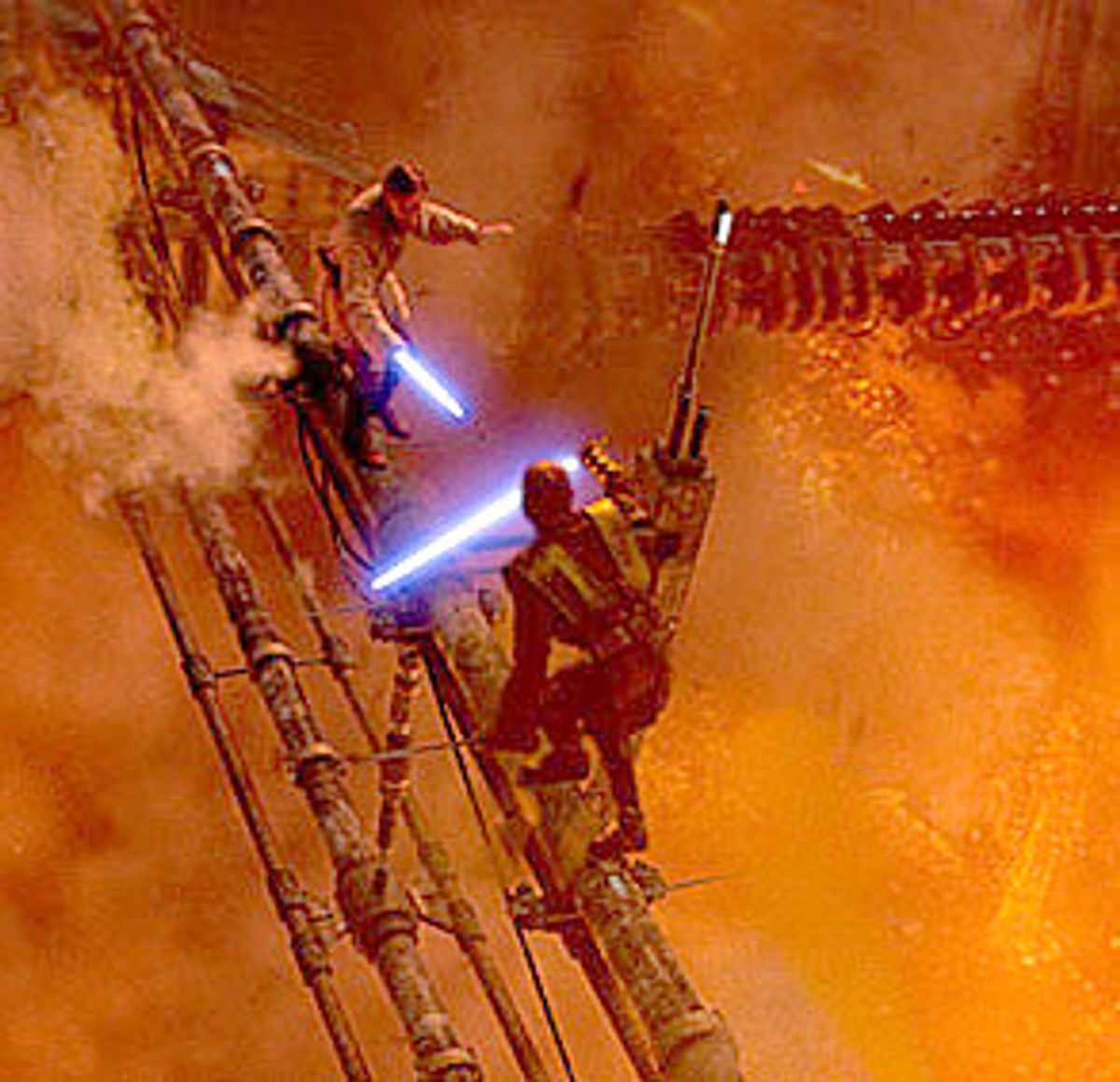 For years fans of the "Star Wars" series have been trying to convince us nonbelievers -- and, to an extent, themselves -- that George Lucas is a genius whose work plumbs deep universal themes, a fact that would be self-evident if only we'd accept Joseph Campbell as our personal Lord and savior. Somehow, a series that began as an enjoyable tongue-in-cheek amusement has turned into a runaway train wreck of convoluted yet facile mythology, one that inexplicably invites, but can't support, constant defense as a serious work. It's not enough that the "Star Wars" movies are the work of an occasionally clever but mostly simple-minded auteur-wannabe; they've also been hijacked by zealots who insist on assigning weight and meaning to every idiotic frame, spoiling the fun even for average moviegoers who simply have a nostalgic fondness for the original trilogy.

The release of "Star Wars Episode III: Revenge of the Sith" marks the beginning of a new era: one in which there are no more "Star Wars" movies to look forward to, or to dread. If you've read anything at all about this new "Star Wars" picture, you've probably heard that it's a scathing indictment of the Bush administration, complete with a power-hungry villain who overrides the Senate willy-nilly in his megalomaniacal quest to control the Galactic Empire. Stop the presses: George Lucas has had a thought! All this time we thought he was interested only in swinging around his mighty light phallus -- uh, saber -- and writing dialogue like "Remember what you told me about your mother -- and the Sand People."

Fans of the light-saber stuff and "You're soaking in it!" dialogue won't be disappointed by "Revenge of the Sith" -- there's plenty of both. But before we all hail George Lucas for raising the level of political discourse in American cinema (and on that score, the accolades have already begun to roll in), let's remember that all of the "Star Wars" movies -- even the genuinely superb "The Empire Strikes Back" -- have a relatively simple piece of rhetoric as their backbone: Good must triumph over evil.

There's nothing inherently wrong with that as a theme for a series of fantasy movies. But it's much too simplistic to be taken seriously as a political statement. And it's the kind of oversimplification that plagues both sides of the current political divide. Neither of the Georges -- Lucas or Bush -- seems to realize that a black-and-white ethos is no template for a world that too often includes shades of gray.

But before we talk about that, a few other points: Some critics I know have been asked by their editors not to actually review "Revenge of the Sith." "Just tell people whether or not they should spend their money," the directive goes, a huge victory for critical thought in the media. So some of you may be wondering: Is "Revenge of the Sith" entertaining? Are the action sequences exciting? If I'm a fan of "Star Wars" overall, will I have to force myself to pretend that I like this one, as I did with the wretched "Attack of the Clones," or is there a chance that I may actually have fun this time around? And what the heck happens in this one, anyway?

Last question first: We finally learn exactly how Anakin Skywalker (Hayden Christensen) became Darth Vader, after betraying his mentors, Jedi Master Yoda (as always, the voice of Frank Oz, and, as always, a charming presence) and Obi-Wan Kenobi (Ewan McGregor, once again valiantly attempting to give a real performance in a picture that has little use for actors). It turns out that Chancellor Palpatine (Ian McDiarmid, slapping sleaziness all over his performance with a trowel), who we thought was one of the good guys, is actually a bad guy -- uninterested in democracy, he instead hopes to become the all-powerful dictator of the Galactic Empire. Anakin is, of course, secretly married to former Naboo ruler and current Republic Senator Padmé Amidala (Natalie Portman, in a succession of hairstyles that make her look like a zonked-out '70s supermodel). He returns to the city-planet Coruscant -- he's been fighting the so-called Clone Wars, as well as doing stuff like rescuing Palpatine from the separatist faction that has taken him hostage -- to discover that she's pregnant. "Something wonderful has happened!" she informs him, the doughnuts clamped to either side of her head quivering with hormonal joy.

But Anakin is haunted by nightmares: He fears Padmé is going to die. What can he do to save her? Our galactic Robert Johnson finds himself at the crossroads. What's more, he grows resentful when he's appointed to the Jedi Council (yay!) but is not allowed to become a Jedi Master (boo!): He expresses his displeasure at this decision by glowering and pouting and stomping around noisily. Meanwhile Palpatine, grooming Anakin to be his right-hand man, whispers sweet nothings in his ear in an attempt to lure him to the dark side. He's the friendly stranger in the black sedan, and Anakin hops inside his car.

In a weird way, the story actually makes sense on-screen: Lucas (who also wrote the script, in case you couldn't guess) seems to have taken some care this time, and compared with its predecessors, at least, the picture moves along reasonably swiftly and with an almost shocking adherence to dramatic logic. "Revenge of the Sith" also looks much better than "Attack of the Clones" did: It doesn't have the flat, bland-bright color sense of the earlier picture, and its characters, thankfully, don't look so much as if they'd been pasted in after the fact. The action sequences, most notably the big showdown between Anakin and Obi-Wan, which takes place against some cool orange molten goo, are at least as exciting as the moment Padmé gives birth: George Lucas is not one to give short shrift to the miracle of life. I suspect this picture is pretty close to what fans were hoping for, and for their sake, I'm glad it's markedly better than the two that preceded it.

But "Revenge of the Sith" is still crap. "I sense Count Dooku!" Anakin Skywalker announces warily in one of the movie's early scenes, and he's right -- the smell is all around. The performers either act all over the place (McDiarmid) or slink through the picture with vague embarrassment, waiting for the whole thing to be over (McGregor). Others, like Samuel L. Jackson and Jimmy Smits, keep their heads down and their noses clean, perhaps hoping to get through a scene before anyone says their character names out loud. (There's no greater humiliation than to be minding your own business on the skywalks of Coruscant only to hear some yobbo yell out, "Hey, Senator Organa, how's it hanging?") Christensen, a young actor who has already given us one great performance (in the 2003 "Shattered Glass"), is especially thick and dull as he wavers sluggishly between good and evil. Why can't he just scoot on over to the dark side and be done with it?

"Revenge of the Sith" might be tolerable if it weren't designed to be taken seriously. But Lucas intends the whole damn thing to be funny as a crutch: Of the four "Star Wars" pictures he's directed himself, this is clearly the most ambitious, and the most highfalutin. Clearly, the hope is that moviegoers will find it rousingly topical. At one point Padmé, furious that the Senate has been so easily steamrollered by Palpatine's slimy promises, cries out, "This is how liberty dies -- to thunderous applause." Anakin, as he's becoming less Jedi knight and more dark knight, snarls at Obi-Wan, "If you're not with me, you're against me." Obi-Wan shoots back, "Only a Sith lord deals in absolutes."

Funny, but all Lucas knows is absolutes. "Revenge of the Sith" doesn't work as a political statement because for all the lip service Lucas pays to democracy, he barely seems to know what it is. In the "Star Wars" series, democracy may be the alleged goal of the Republic, but what the movies really value is order: Democracy -- the genuine kind, which means you just might get stuck with a president you don't like -- is too messy and complicated for the "Star Wars" worldview. The very scale of these movies prevents anything but the most obvious moral readings: Preoccupied as they are with good and evil, with so little gray in between, the "Star Wars" movies are more like faux Wagnerian epics that have been clumsily retrofitted with democratic ideals. They ask us to tremble in the face of their greatness even as they claim to be on the side of the little people. Lucas doesn't realize he can't have it both ways.

So is Palpatine supposed to be George W. Bush? It appears so, because he's ruthless, unappealing and arrogant. He's a cartoon baddie, like Ming the Merciless, or Mumbles, or the Penguin -- all of these are very bad men, just like that bad old George W. If Lucas really knew what he was doing, he'd have given us a character who believed with all his heart, as George W. surely does, that he's on God's side. That would have made for a truly creepy and treacherous villain.

But Lucas doesn't have that much imagination, or that much subtlety. Any point he makes is bound to be as obvious as a light saber through the sternum. "I pledge myself to your teachings," the now-evil Anakin tells his guru Palpatine, who responds, with homoerotic fervor, "I feel your power. The force is strong within you." In its thirst for wisdom, "Revenge of the Sith" asks many questions, but none more important than this one: Is that an absolute in your pocket, or are you just glad to see me?