The emperor has no couture

"America's Next Top Model" crowns a winner, but stumbles on the runway. 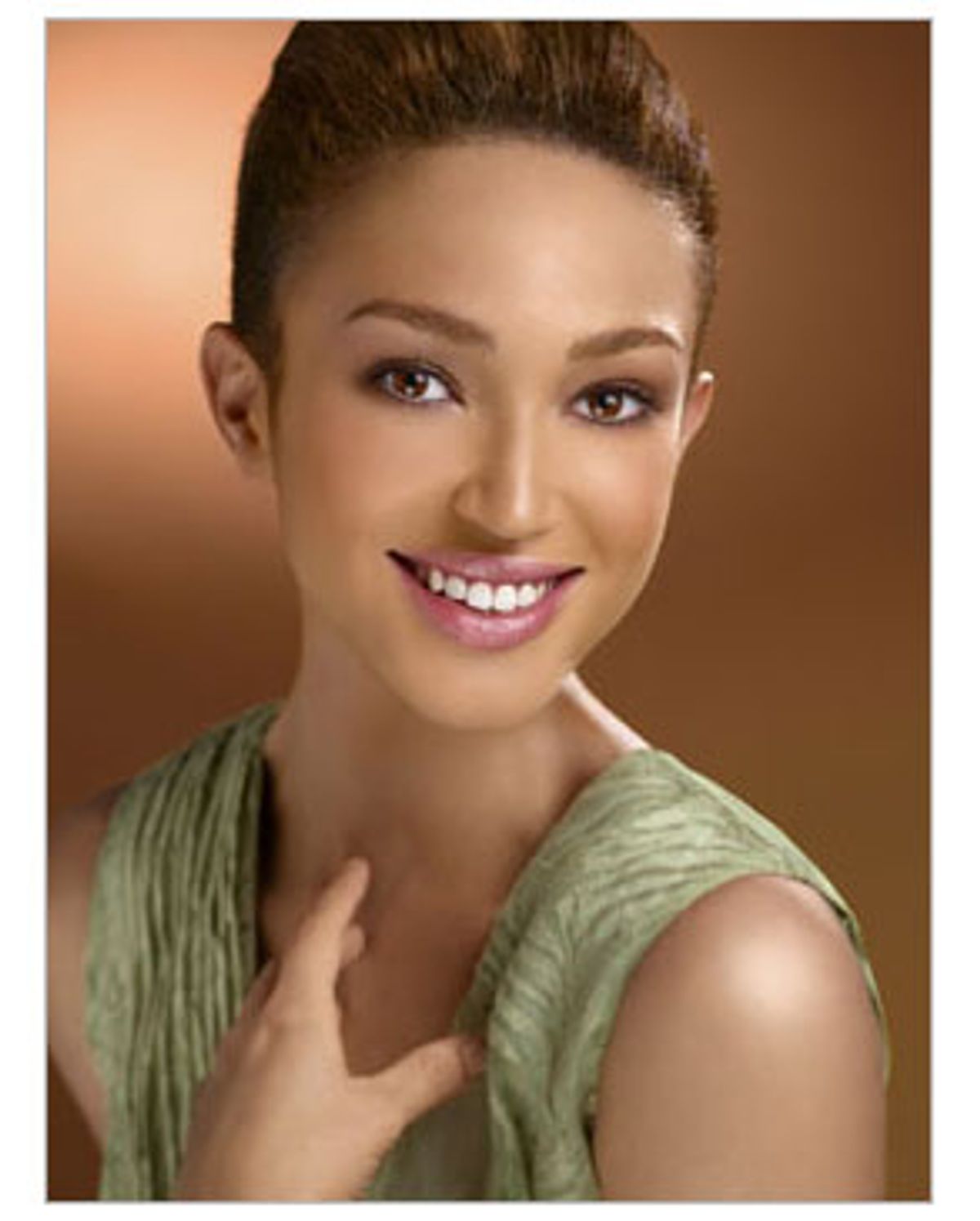 Last night, the fourth season of "America's Next Top Model" drew to a close, and all of the crucial elements were in place: Tyra Banks wore her "talk to me" makeup. The three remaining models insulted each other. There was a big fashion show. Butt cheeks were hanging out. The two remaining models cried and resolved to never feel "not good enough" again. The judges bickered. Janice Dickinson's jugs were on full display. Finally, the winner's face flashed on the screen.

Yeah, no big surprise there, either. So why did it all feel so anticlimactic?

Die-hard fans have been asking themselves that question all season long, or at least since Tyra angrily attacked contestant Tiffany for laughing and joking around after she was dismissed. The tyrannical Ty-rade seemed to signal that Tyra - and the show - were both beginning to get a little too big for their britches. Sadly, instead of redeeming the whole process with a so-called fierce finale, Tyra and her vicious panel of judges played their parts without conviction, and uttered lines that sounded less campy and audacious than downright silly and pathetic.

But Tyra's weekly routine has become almost intolerable, alternating as it does between giggling and glowering. Each episode, she squeals onto the scene adorably, bright orange extensions and lip gloss gleaming. Then she gets all serious, encouraging the girls to weep openly, while offering them wide-eyed, egocentric advice. Next, she sneaks out, only to reappear later in leather ass-pants with her panel of judges, where she encourages everyone to make serious fools of themselves. Once they do, she shakes her head and tells each girl how disappointing she was, possibly throwing in a few harsh words about what the girl revealed to her during that very vulnerable moment earlier in the show. The other judges hiss that the girl is truly sad, and then Tyra sanctimoniously announces who will stay and who must leave "immediately." (Contestant Tiffany coped with the faux-solemnity of the situation by laughing, thereby incurring Tyra's wrath. "Is this a joke to you?!!" she bellowed.)

But Tyra was only the tip of the iceberg this season. The most obvious problem, among many, was casting: For the first time, the girls were boring and self-conscious and not all that smart. Casting sharp, interesting girls has always been the show's saving grace; yes, it's about models, but it's also about complicated, confused, witty young women figuring out who they are. And -- oh yeah -- insulting each other. But when the girls are dumb, not that witty, and have nothing to say? That's when you realize the emperor has no couture. "Oh my god! I'm watching a show about models! What is wrong with me?"

In fact, none of the women were remotely sharp -- except for Tiffany, who was not only strikingly beautiful and photographed well but had more character and personality than all of the other girls combined. But Tiffany was dismissed essentially for blowing off a particularly annoying and pointless challenge involving a teleprompter.

Which brings us to our third major problem this season: The challenges felt idiotic and arbitrary. From the "imitate a wild animal while wearing a poncho in the rain" challenge to the "learn a funny accent" challenge, it all felt poorly thought-out and amateurish.

Worst of all, though, the fashion shoots this year had been thoroughly "Apprentice"-ized, featuring products (Caress Body Wash, Cover Girl Makeup) that were not only boring and safe, but totally eliminated the possibility of flaming trapezes, massive fish tanks filled with sharks, heavy native headdresses, gender-bending frolicking in vats of lard, and other masochistic high-fashion challenges Tyra once led us to believe were essential experiences for any aspiring model. This season, the screen tests and shoots were so bad, when I try to remember them, I keep conjuring up scenes from "The Starlet" instead. That's right: "The Starlet," a show that once strained to touch the hem of "ANTM," now is almost indistinguishable from it. That's how far the mighty have fallen.

Given all these factors, the suspense feels falsely pumped-up from the first few minutes of last night's finale. As the show begins, Sensitive Mommy Tyra has her soft "make me cry" makeup on. She sits, Indian-style, facing each girl and asks her what her deepest, darkest secrets and insecurities are, perhaps so Mean Judge Tyra might throw them in her face later. But the girls are on to Tyra. They saw how she chewed out Tiffany, just for being a human being! So, like a robot, Kahlen reports that she just wants to win, real bad. Naima says this cutthroat, shallow competition has made her even happier with herself than she was before. Hurray! Even Tyra isn't buying that. (Naima is easily the most full-of-crap contestant this show has ever seen. I keep expecting her to shout "Respeito!" out of nowhere.) Finally, Keenyah says she really likes to eat. At least she's being honest. Tyra tells her she'd better eat less, because only Tyra gets to have an ass as big as Tyra's and still be as fierce and as famous as Tyra.

Next, the girls shoot a commercial, which is all about promoting Cover Girl Makeup. Naima talks in this soft-spoken, pretentious voice like she's got a mouth full of bubble gum. Keenyah thinks she's hot shit, but it's clear she isn't. Kahlen fumbles all her lines, which makes her seem sympathetic, but sort of wilted nonetheless.

The judges confer. Keenyah is eliminated. No one cares all that much, except for Keenyah. "I'm gonna take all the judges' advice, as if I'm still gonna be the winner at the end of the day," says Keenyah, and we have to agree: Denial is probably the best coping strategy available to an arrogant overeater who wants to be a fashion model. But then, she adds, "Nothing's gonna hold me back - unless I get fatter," and out of the blue, it's hard not to wish she weren't leaving.

Next comes the big fashion show. Kahlen says nice things about Naima, but Naima is focused on sounding focused - or "concentrated" as she would call it. She says she wants to put her past as a party girl behind her. Snore! Who doesn't? Let's hear back from you once you've snorted high-grade cocaine off some male model's rock-hard abs backstage at the Dolce and Gabbana show.

The fashion show goes pretty well, which is also sort of disappointing somehow. Both girls can walk the walk. Unfortunately, neither has much to say, so the run-up to the final judging session is dull. The judges are left to make their decision, and they seem pretty split, but it's obvious who they'll choose. That's part of what makes the show worse now than it was during the first season: Naima has a much more memorable look, which is far better for promoting the show in the future. Plus, she's been an obvious favorite among the show's viewers from the first week.

So Naima's is the face that appears on the screen. Naima screams happily, and it might just be the least infectious scream of joy ever.

Oblivious as ever to the deep insignificance and anticlimactic blahness hanging over the room, Tyra waxes philosophic: "You guys have proved that models aren't shells, that they're true people with feelings and emotions and pasts and insecurities." You can almost hear the bugles blaring in the distance. Yes, you girls truly have done a great service to models everywhere. Now, everyone will know that models are not merely shells, they're real humans, filled with empty, unoriginal thoughts and big, useless brains!

The girls are, of course, more than happy to take Tyra's cue and overstate the importance of it all. "I feel like modeling is kind of my way of expressing my emotions," Kahlen tells us. Um, OK. Gotcha. And what happens when you reach the ripe old age of 23? You turn to the bottle?

Then, as if we haven't grasped quite yet that Naima is now a product (see also: shell) and not a human being, Tyra gives us a handy jingle that we can use to sum up our emotions about her whenever we spot her peddling body wash on the pages of some mediocre women's magazine:

Spunky? Spunky?! "Spunky" is about the least edgy word in the entire dictionary. Are we talking supermodel here, or are we talking "Blossom"?

Thus, as the U2-alike exit music plays, we find ourselves wondering how a spectacle that once seemed so spirited and unpredictable could suddenly feel all awkward and stale. Bloated egos? A new casting director? A false sense among the producers that the show would be good no matter what?

So here's my tough-love "talk to me" moment for Tyra Banks: You take some responsibility for yourself, and fix it! Be quiet, Tyra! Stop it! I have never in my life yelled at a supermodel like this! I was rooting for you, we were all rooting for you! How dare you! You had the best reality show on television, and you screwed it up! Learn something from this! Do you hear me? This is no joke! This time next year, I'd better be watching beautiful, neurotic misfits bungee-jumping into a Piranha-filled river ...